So we do have a “I love this forum”-thread.
Time for a critique-thread… and not a “praise only” one.

What I like:
The new badge System
The linear posting timeline (so good!)
The new quick-reply system (but is there fullsize editor that is centered?)
Colours are good - but where is our stitched leather?
The possibilty to link it later with the game in terms of badges or steam achievements
New emoticons!

The whole forum feels cluttered right now. On the front page i see the categories, okay. But the latest only displays the last posts of the category itself, and not of each subcategory.
If you go on the general Chat, you get clutter from general chat itself AND suggestions+devquestions

Honestly i think the forum would be better off with XenForo (BeamNG homepage, AC Forums) or VBulletin 5.0 connect.

I agree with a good chunk of that, actually.

Things I like:
Linear posting (No more pages!)
Quick Reply with Preview
Semi-Familiar color scheme (things seem a little off, but not bad.)
Immediate notification of thread/post updates.
Ability to upload more than 3 images per post. I used this once already in my Company Thread, and I like it.

Things I dislike:
To be fair, I liked the old layout’s discrete categories, subforums, and basic layout.
Wasting Space. I don’t notice it as bad as some others do, but even I’ve noticed a ton of wasted space to the right of the text on the page. Would rather have it spread to a margin on the other side, to be honest.
Lack of text editing capabilities without remembering half-a-dozen codes.
Names of the last poster replaced with icons. I liked the old way, honestly. Tell me who posted last and at what time, not make me hover over an icon.

Things I’ve noticed but neither like nor dislike:
Forced Avatars. I typically don’t bother because I’m not that creative. However, the old forum simply gave me a blank space there and let me be.
No “Online” status information. Was always useful to tell when someone was signed in, especially for challenges.
No signatures. I get that it makes a cleaner interface, but some people used them to help point others into their company threads. 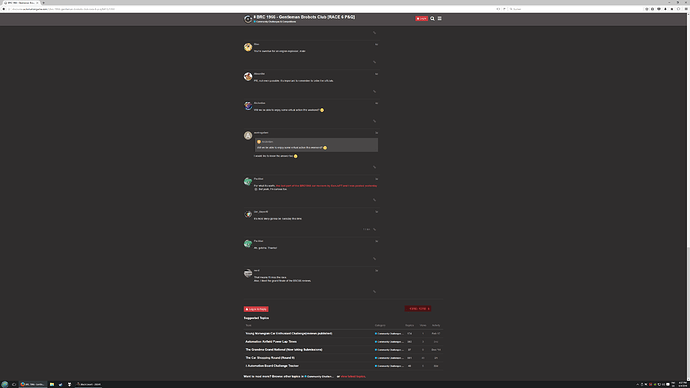 I have to agree with everything that’s been said. 2/3s of my screen are empty, and in a terrible not-dark-enough gray colour, which simply doesn’t match the cluttered UI of the game, which has excessive information and just has tons of things shouting at you all the time. The round avatars are terrible for things that aren’t round, like my avatar, which are also super small.

I have to raise a concern regarding mobile users. Sure, this layout works very well in my phone, or so it should, but it also will use a lot of data to load a big thread with all the pictures, and also live updates. Most people have to deal with limited data plans, and then to choose a forum that has a mobile like theme, but actually is terrible for mobile users doesn’t make any sense whatsoever.

Although I’m happy we get a modern forum, I also must agree with stuff above and add one more.
At home page, looking at the latest posts/theme does not help much if there are stuff pinned in that theme. For example Community Challenges & Competitions. There will always be :
Automation Board Challenge Tracker 22d
So You Want to Host a Tournament Dec '15
Community Challenge & Competition warning May '15
and not the real latest stuff.

I will start with cons, so I can leave on a positive note.

Cons:
Yeah, navigation is definitely a nightmare. It is hard to find things, and worse, it’s like reddit only more drunk. Cluttery is a perfect word to describe it! I am sure I will learn to navigate it, but it’s definitely going to take some time. Threads just don’t seem to have any fluidity between them in the organization.

I also liked having signatures. It gives a poster more personality and lets us link to things, as Prylix already said.

And like everything today, it is certainly optimized for smaller devices like phones, with absolutely no consideration for those who use modern computers. I have 6 inches of vast emptiness on either side of the text, and I’m not exactly on a big monitor.

On-The-Fence:
Badges. I have none. Not even my old Turbocharged badge. Going by descriptions, I do not even own the game, despite having been around for almost 3 1/2 years.

Pros:
The upside are: no ads (or none I have seen yet), no page clicking as it is continuous scroll, and I am really glad the devs/mods got a format they can manage more easily so hopefully those spam threads will be less likely/frequent. I like not having ads, as so many forums do. I also hate clicking 924 pages to read a thread I got behind on.

Overall, so far I give this experience a C. It isn’t bad, but not good either. I will learn to use it better, and may even come to love it. Not that it is my choice, of course, as I have no part in decision making either way. If I don’t learn to love it, then I will just suck it up, or go away.

I am not even sure if i should like the continues scroll. I mean, while its nice if you reading the thread for the first time, but for some long threads, like the BRC Challenge, i could image its going to be a pain.

Also, while it certainly looks modern, its feels cluttered. I think because content areas are not separated by backgrounds or borders correctly.

Here a small change that - i think - would help: 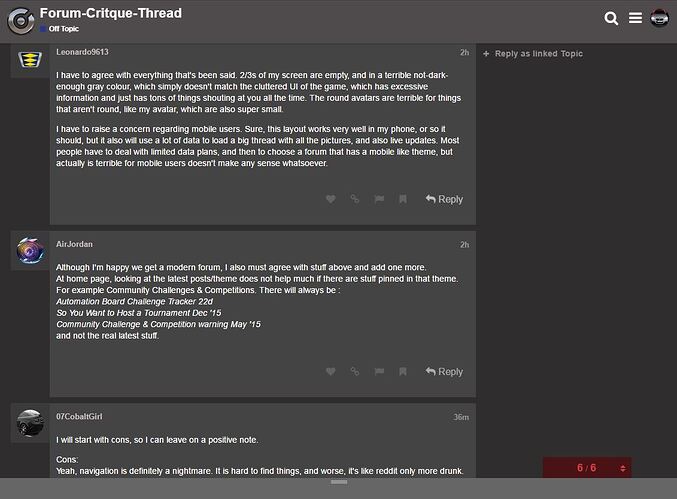 I also noticed, there is a lot space that is wasted by the action buttons underneath the post: 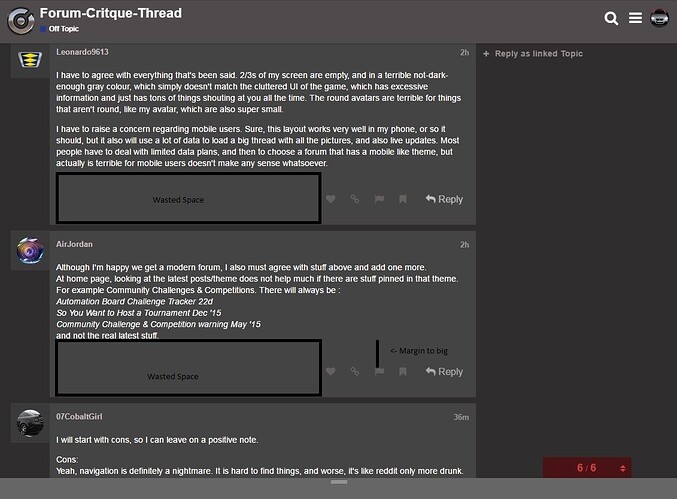 I’m not sure about the colour scheme. The pale red’s and greys don’t go together very well and end up making things hard to read and visually look messy.

I agree with the masses on many faults: the color scheme, while similar to the last forum, makes everything difficult to read and cluttered. It’s not very inviting to go onto a forum and see wasted space and cluttered words. I also wish for a page system and an easier way to find which thread you’ve not yet read. As Pyrlix mentioned, Xenforo works very well and looks great on the two forums mentioned.

My biggest problem is that this forum seems to be designed for mobile and not the desktop, so much wasted space even on a 1080p 16:9 monitor. I also dont like the constant scrolling, in bigger threads its much easier to remember a post you want to look at by what page it was on, rather than the post number, or taking 50 years to scroll down a thread that may contains hundreds of images, not all of us get 100mbps down to load all of those images.

No signatures, the reply/editing box gives a preview to the right, making both boxes to skinny.

I understand why the switch was done, but the more i use this forum the more i dont like it.

But, it does have some upsides, i like the uploading/attachment system better, notifications for thread replies etc. Potential for game integration.

Im sure most of this could be fixed, but this forum just seems like mobile is its main purpose, and not desktop/laptop users.

Also, in simliar fashion to the problem toms hardware forums face, the suggested threads are months or years old, so alot of dead threads are going to be dug up by people just clicking and looking at those.

via Imgflip Meme Maker
on the plus side I like colours

I found it to be very cluttered too at first, now I really like it after a few changes, maybe that helps you too:

Not to grump, but I assume twitter and facebook all look pretty similar to discourse on a 4k monitor, maximized. But the amount of dollars they sink into UX/UI design is huge, they go for a more column format for a reason, but I think the crux of it is below:

With a standard wide forum design, if people don’t manage their own line brakes, you get run on posts that are super hard to scan and read. The reason newspapers run in columns is you scan articles without having to run your eyes back and forwards. Books do not print their text from the left page to the right page and back again. Again to make it easy to read and scan. All of User ability design for reading in the last 200 years or more, has been about having text in a portrait/column format.

For some reason, classic forums decided to force all posts into being written into letter boxes. This is probably when a lot of forums where first created, everyone had 4:3 aspect ratio monitors. So with the profile picture on the left, and a bit of stuff on the right, made each post into a column format. Once we moved over to 16:10 ratio wide monitors this design has fallen apart.

Now looking at that 4k monitor screenshot does look a bit stupid, and after looking at that screenshot, I wish I had 2 or 3 4k’s instead of 3x1080’s. Because I would be using them as 6 portrait monitors like this: 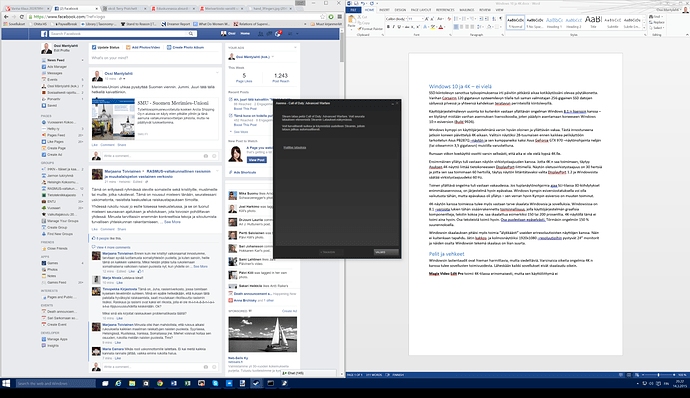 Windows key+Left Arrow/Right Arrow for the win. Surely you should be on IRC/Livestream and the forums at the same time!

Sorry for being a grump, and I’m not trying to tell you how to use your displays. Just the logic behind the narrower Stream. If I hold up an A4 letter at the distance of my monitors, it is actually pretty close in dimensions to the posts in Discourse.

And just to sort of be grumpy a bit more: 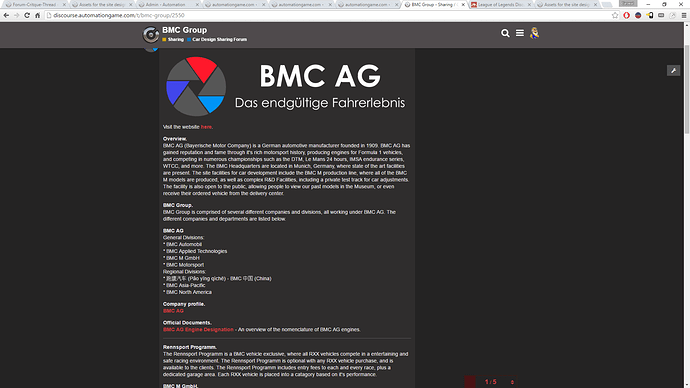 Old Forums, run on paragraphs, unnatural to read compared to facebook, news sites, most other day to day reading, etc. 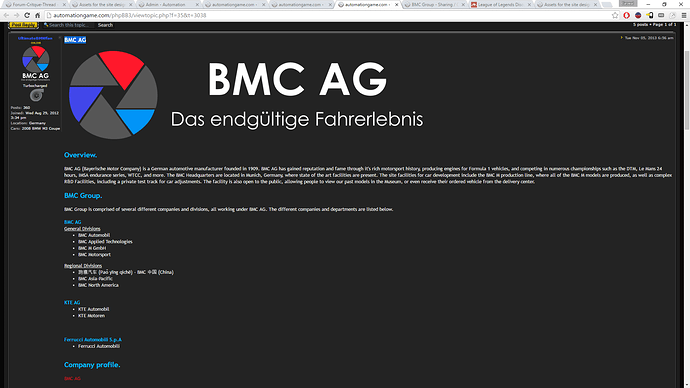 For a none forum example, ArsTechnica: 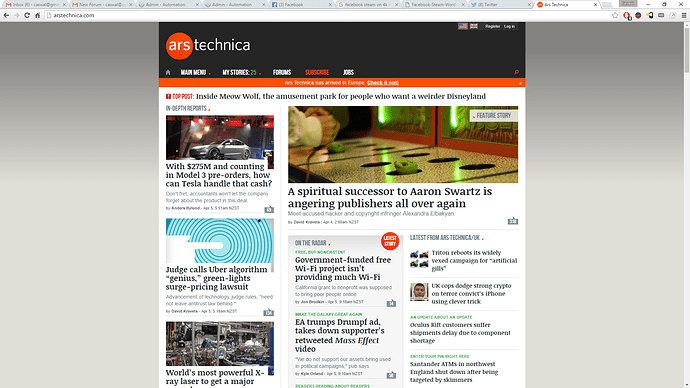 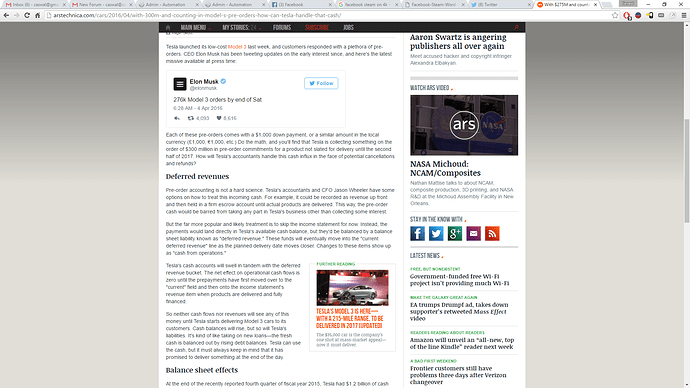 Now from a measurement point of view. The News article text area is 650px wide on ArsTechnica. The text area on discourse is 700px.

Edit: Rob just changed the CSS, and made the the text/post area in discourse about 850px.

Navigation:
The old forums were a bit strange, and that hitting the automation logo in the top left took you back to the front page. On here it takes you back to the start of the forums.

The back button also has pretty good logic here. But I am also a tab maniac. I hit Latest, then open up all the topics I want in new tabs, close them when done.

But I know everyone operates individually.

On the Fence:
The default importer had no support for Ranks as badges, so this is failing of my import code/logic. And I am still trying to resolve it, so give me a bit of time. I can always apply badges by hand. As only 1 Rank at a time could be applied on the old forums, your Track Building rank got missed. I hand created only the core badges. Message me what you need.

Some changes I just made:

I think it’s better. Looks more like the old forum color wise, and the reading area is bigger. Defined space between posts helps distinguish between one post and the next.

It’s gotten a lot better. I would make the avatars even bigger, however.

Also, changing the browser to half screen every time one enters the forum isn’t a convenient solution, as it would mean going back and forth from maximised to half-screen.

Yeah, bigger avatars would be nice, like 60x60 instead of the current 45x45. It seems like that is how large the avatars are saved though, i.e. 45x45.