Front wheels fall from the car in beamng

someone knows which is the maximum front tires size i can put in an automation car, i put the maximum my car allows and it breaks the axles or bushings and tires pop out of the car every time i do a launch from a dead stop so i have to leave very slowly then i put it to 255 and it didn’t break but as it is fwd the was spining in all the gears all the time(as it has 849 hp at 16 psi)
I tried with a awd trans and it happens the same. Also if i put stiffer suspension it gets worse as it breaks whenever i apply full throttle if the car grips because of wheel hop if the car doesn’t have grip it doen’t break when rolling.
Is that beacuse of the width of the front tires or because of torque steering or wheel hp and i can’t do so powerful fwd sports/racing car? I hope to be able to fix that, i tried with all the susp types and adjusments and the best was Double wishborne with coil on the back on the comfort setup but the front susp is too soft like that i would like to play it with sport setup.

It would be great if we could see some screenshots of your setup (engine, wheels, drive train, and suspension). Pictures tell a thousand words.

I have a 1500HP AWD sitting on 325mm with double wishbone in all corners. The tires are fast to leave when I crash, but I have never ripped one off accelerating. You may have a bad export. Delete the car (beam.ng/mods), clear the cache, and re-export it fresh. If that doesn’t fix it, make sure Beam and Automation are updated. I know Steam handles that automatically, but I have had download glitches too. 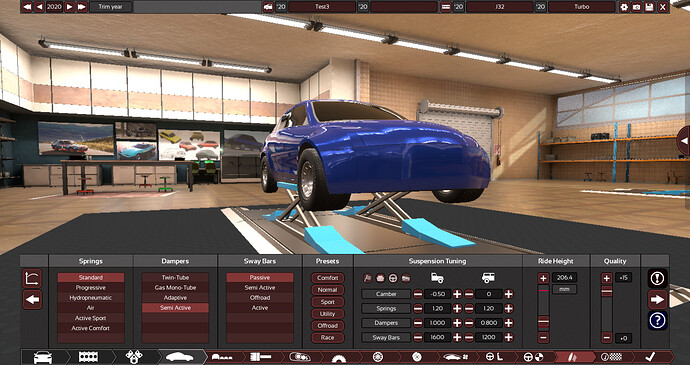 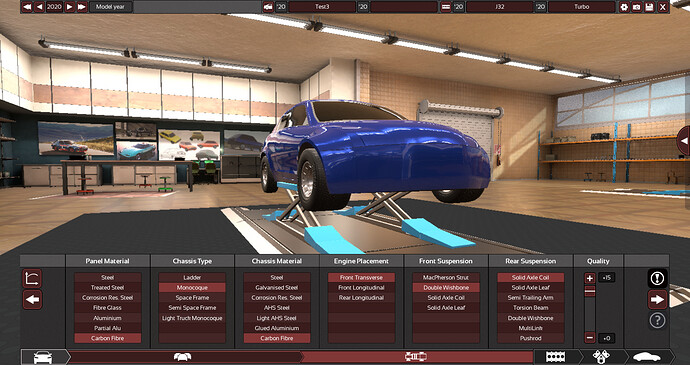 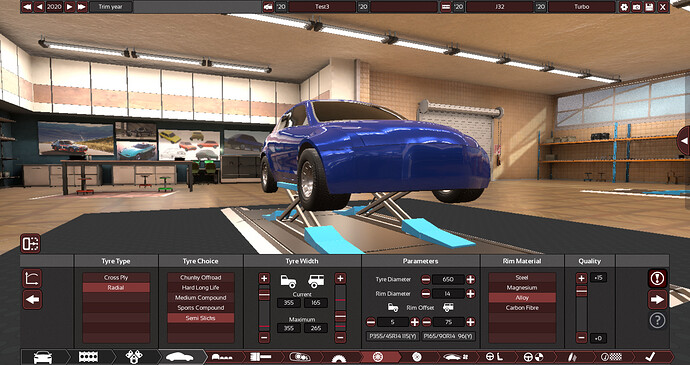 Here some pictures of my setup.

I know that is a crazy build and missing the lights and mirrors but is just for test as i deleted the original model that i did and started all over again from scratch to test if the problem was from the body i chose, so the thing of delete the car is not the problem i think as i have the game fully updated. The awd i put it on 70 front 30 rear only to try i have another car with smaller tires and 60 rear 40 front that doesn’t have the problem.

If i don’t solve it it’s ok as i put 295 of front tires width and it works well although the car spins all the way till fourth in no prepped tarmac, also i discover that the fifth is now too long and if i put more spacer the car lose stability and crashes changing to third.

Thanks for your quick answers.

See how there’s the red exclamation mark on the far right side of the ui? I would recommend hovering your mouse over that, and taking a look at the advice it gives.

If your worried about the car spinning the wheels and losing control, it’s probably due to:

If your running a car with 2000 odd horsepower, I would recommend having a way more balanced tire setup.

Also, look at the graphs! They tell you a lot of VERY helpful information.

The rear tires are small on the FWD version because is for drag, the AWD version has 265 on the rear tires, i put the suspension like that because with big front tires it breaks the suspension if it is stiff. The bias of the AWD i set it up like that only in this car in other awd i have 40 front 60 rear or 50 50. The AWD version doesn’t loses control in fact accelarating holds very well, is the FWD when i release the throtle in high gears or lose power because of the gear setup, i thought, but maybe is because the turbo lag you mentioned it really has a lot, i have to get into solve that. It has 849hp not 2000. I will check the red marker advices, i didn’t put time into looking that as i was just trying diferent parts and setups to test if i could fix that but didn’t look in those advices as when i build a car that is not a normal production car it always pop the red but the cars work but this one does not.

I know that this car is a crazy built but i started it as a fwd race car and it became a test to the limit of the fwd in the automation/beamng games, as i like to play with different type of cars not just with rwd and awd cars and i like fast powerful cars, and i know that this game is more focused in street production cars than in race cars but i use it for build both type of cars.

Thanks for your help.

This is a pretty specific situation, so to go any further it’d be good forus to have a .car file to look at.
Do you know how to export the car? (not to beamng, as a .car automation file)

I know you are going for crazy, but the FWD Fiesta RS only makes 200, the transaxle mounted Focus RS makes 350. 850 from a tail dragger may just not work. Factor in torque steer, and the shock side loading may be your problem. If you do go AWD, make sure the tires match so you don’t get drive binding. These are IRL suggestions, but the simulation ion both games is remarkable.

Try turning down the resolution in Beam. I get weird physics glitches when I push my graphics too hard. What GPU are you on?

Try not having +15 tire quality, that usually fixes it

Wheels falling off the car on spawn means that the beam strength holding the wheel to the axle is weaker than the forces already applied to the wheel. This depends on friction i.e. grip coefficient, contact patch and tyre profile… But is also hugely dependent on how beam parses the body mesh too. Thus your mileage will vary quite a lot.

One solution might be to edit the relevant beam strength to “FLT_MAX” but be warned if the sim is already dealing with high forces through the wheels it may simply break the sim altogether.

Ok thanks for all the help, i will try those things and some other things that came up with and it is enough because i lost a lot of time trying to find a way fix that and i don’t want you to make spend more time with this, i think you helped enough, i will let you know how all this ends hahahaha.

With break the sim altogether you mean that i will have to reinstall the whole if it happens? or just it closes and i reenter the game after restoring the car’s beam file?

The latter, really. And your file will be unusable until you put values in that the simulation can actually handle.

Nope it seems imposible to build that car to hook and not break the front axles, but it is ok anyway, what i did to avoid this problem is put 295 tires on the front and put just 400 hp without turbo and use the nitrous mod to accelerate more from third.

Did you try setting the tires to 0 quality?