Created in 1919 by Gustave Gabatron, The brand has been a pioneer in the creation of customer service protocols, in front-wheel drive, hydropneumatic suspension, etc.

During that 99 years, the brand has gone through several streaks, as well as by various owners. The last one, Montes Cars.

Designed on the late 60s-early 70s (before Jipot-Falgot absorbed the brand), is considered by many enthusiasts of the brand, as the last Gabatron of the golden age of the brand (1934-1975).

His mission was to replace the successful (but already aged) Gabatron DV. 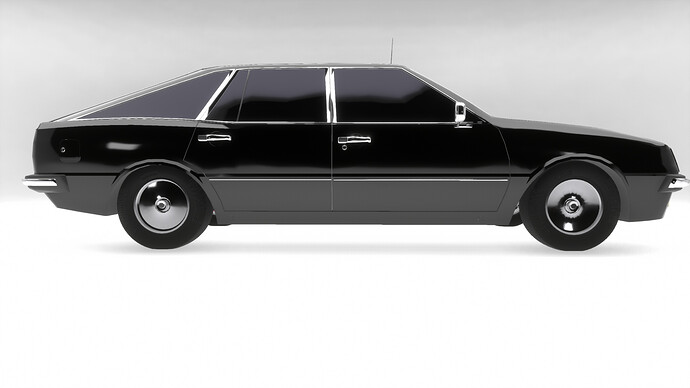 If the DV was already an advanced car, the GX was even more: it improved the aerodynamic coefficient (Gabatron already had experience with the wind tunnel, used in the DV for example), the hydropneumatic technology (apart from the existing one in the DV). , the self-centering steering was added, coming from the GM model), and other gadgets, like electric windows in the 4 doors, and central locking doors. And, for the II-Series, code-starting (without starting with the key) was available in the Palais trim.

The car, of course, it was FWD, but now, mounted in a transversal position.

The model was available with 4-speed and 5-speed manual, semi-automatic 4, and 4-speed automatic. As well as in carburettor and injection gasoline engines, turbo or naturally aspirated, and diesel. All 4-cylinder engines. 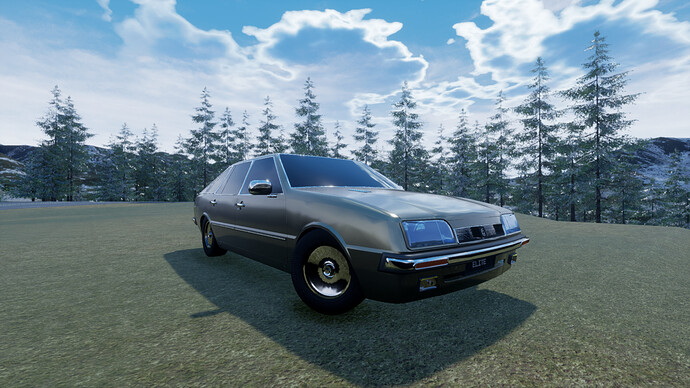 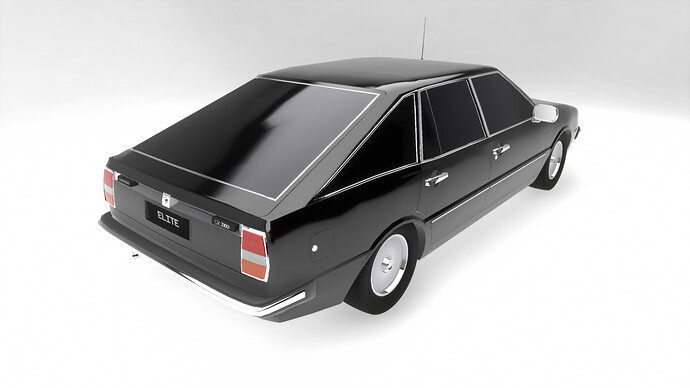 During the late 70s, Gabatron tried to do in secret, a heavy facelift, but Jipot discovered that, and dismissed the technicians in charge of said project.

It was planned, among other changes, to add V6 engines, as it was one of the most frequent complaints among customers, the lack of more powerful versions.

This was solved with the GTi Turbo I versions (135hp, not-intercooled), and with the Turbo II (150hp, intercooled, and now, with E-MPFI)… 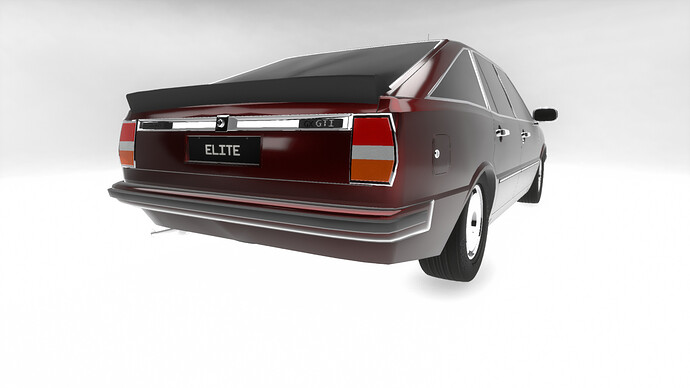 Production ceased in 1988, with 1.5M units sold. It was replaced by the Gabatron XN.

The VESTEH (acronym of Véhicule d’ESsai des TEchnologies Hydroactives), It was a prototype presented by Gabatron in the Paris Auto Show of 1990, as a vehicle in which to show the technical capacity of the brand in hydropneumatic matter. 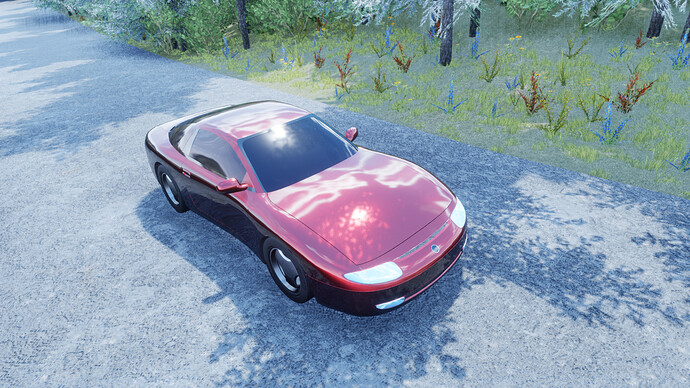 Apart from adding the hydroactive technology of the XN (hydropneumatic, combined with sensors and electronic actuators), added direction to the 4 wheels, controlled each one individually, by a steering wheel, without physical connection (driven by the hydraulic system), and traction at 4 wheels, with viscous differentials.

And the stabilizer bars were active. In straight, they are uncoupled, to offer maximum comfort. And in curve, depending on various parameters, it was blocked progressively. It solved one of the main problems of the hydro-pneumatic suspension: the excessive rolling of the body, now becoming practically null.

The propeller group consists of a naturally aspirated v6 with 205hp, 24v and 3l, combined with a 5-speed automatic, managed by the same radar, responsible for adjusting the suspension in advance.

It was not produced in series, but in the Xenia, the technology of the active stabilizing bars was used.

Given that intercoolers have become mandatory in UE4, how do you simulate a turbocharged engine without an intercooler?

I recreated that engine on Kee.

No surprises here. Now, will use Montes engines.

But about hybrid and EV tech, Gabatron os developing, since 2014, a hydraulic hybrid system. We expect to release on the market on 2020.

Zero changes here. But we are building at Poissy, a new plant to build the future DVs, plus EV models.

And about the dealerships, the situation will not change. Gabatron will continue to have dealerships and distribution networks different from Montes. 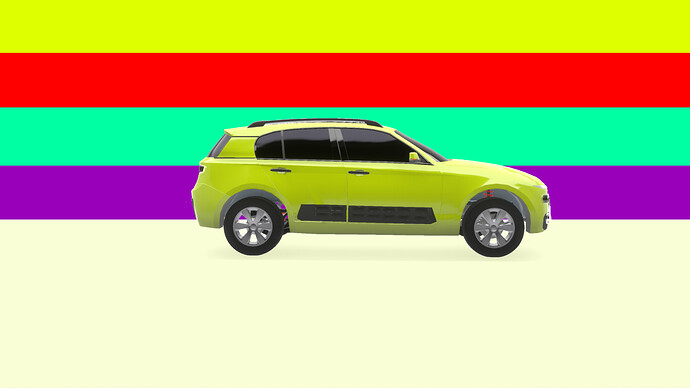 Released in April 2014 as successor from the best-seller G4, the G4 Cross was designed with one goal in mind: to be different from the competition. And at the same time, take practical solutions, such as the ShockBumps on the sides, and front and rear bumpers, double large glove compartment on the dashboard, digital multifunction instrumentation, and progressive dampers.

The G4 Cross is available in the following trims. Two petrol 3-cylinder, and one 4-cylinder Diesel.

*Available with the AT6 automatic transmission as option. 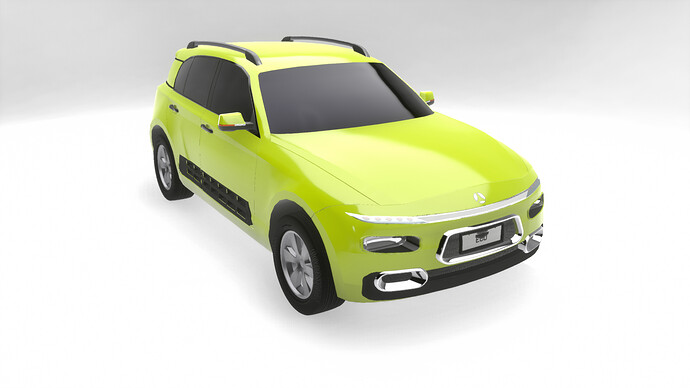 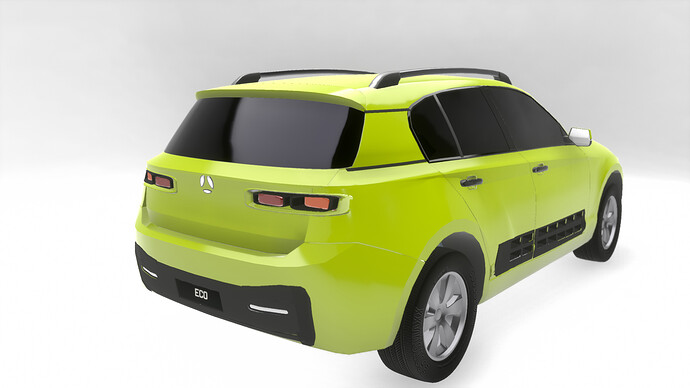 Very reminiscent of a C4 Cactus (before it lost its airbumps in a recent facelift). You even made fluorescent lime green work very well on something that isn’t a performance car.

the G4 Cross was designed with one goal in mind: to be different from the competition.

Be a car with an indifferent design

Anyone else getting some mixed messages here? 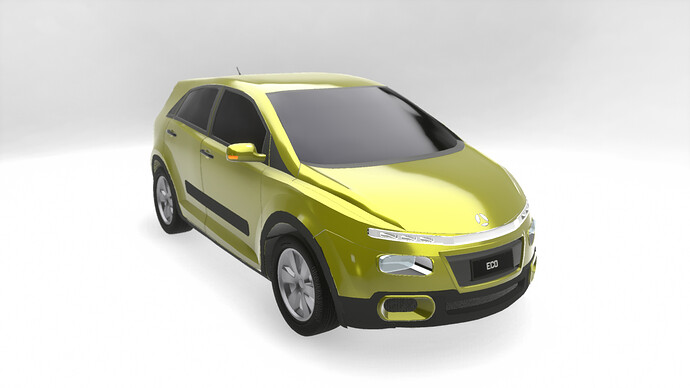 Succeeding to the second generation of the G3, the new model follows the design line imposed by the G4 Cross.

It uses the same engines as the G4. That is, 1.2 EarthTech, turbo or naturally aspirated, 3 cylinders and direct injection. With powers of 82 and 103 hp. A diesel engine is also available. The 1.6 HPI of 114 hp.

Prices are as follows: 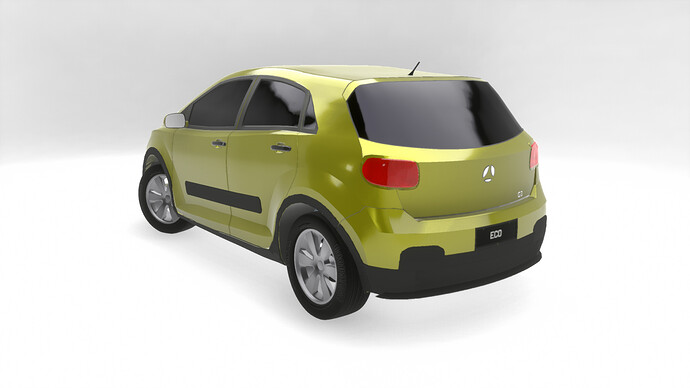 Gabatron returned to the WRC in 2017, when the rules changed to make cars more visually aggressive, and faster. 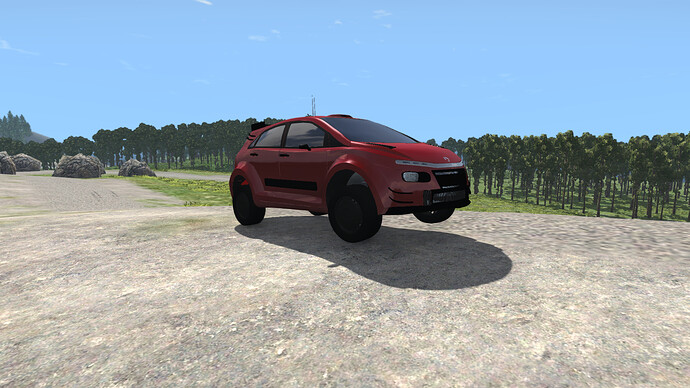 The car is based on the production G3 (as stipulated by the standards), and it has a 4-cylinder turbo engine, 1600cm3, which delivers more than 300cv to the 4 wheels, via a sequential 6-speed forward gearbox, and 1 back.

Our drivers of the official team, Gabatron Total Sport WRC, are Gérard Moureau (with Gavin Pauli as co-driver), and Teppo Vantannen (with Kalle Vantannen as co-driver).

I really like the Gabatron GX: a very nice European luxury car of the '70s. French and Italian style - mostly influenced by the Citroen CX but I see some Lancia Gamma too.

Here we have the restyled G4 Cross. The first Gabatron of the Montes era. 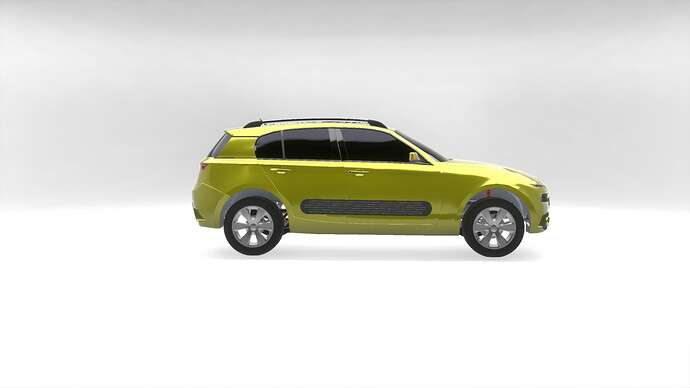 HighresScreenshot000501920×1080 211 KB
In addition to aesthetic novelties, it use Montes engines, with SCHI technology, and say goodbye to diesel engines (so, no more HPI).

And, it makes the debut the new 1.4 Montes SCHI engine. Turbocharged (117hp), or naturally aspirated (100hp) 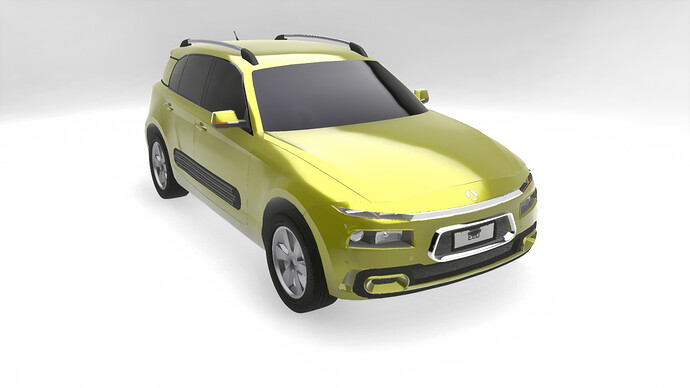 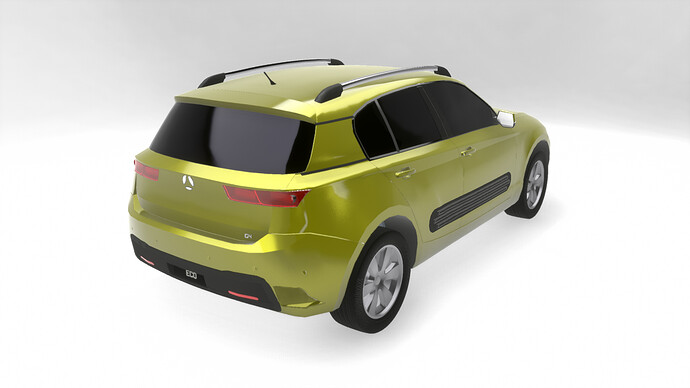 And it comes with, of course, new trims, colours and options:

Coming soon, it will be available with more powerful engines, plus a new Gabatron Sport.

After six years without any substitute for the Gabatron G6, today we unveil their successor, and it comes with a lot of technology and design features who honor their lineage, started with the DV in 1954. 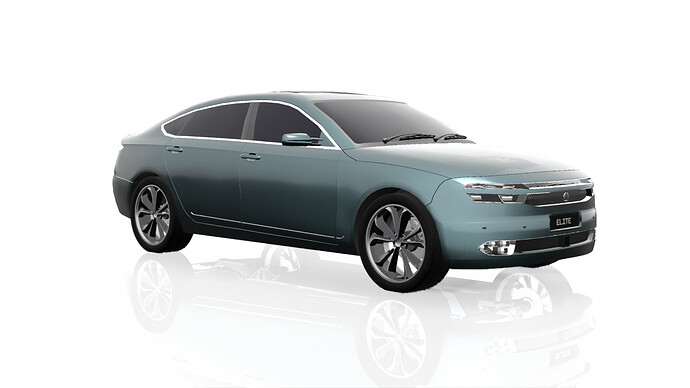 Its main premise is comfort and refinement. And for that reason, we have retouched the hydroactive suspension to make it more comfortable, while providing a greater driving dynamism, while improving reliability. To achieve this goal, we have designed a new pressure unit, with a electrically-operated pump, as well as new control valves, electronically controlled. And in the highest trims (Paris and Louvre), they also have active stabilizers. 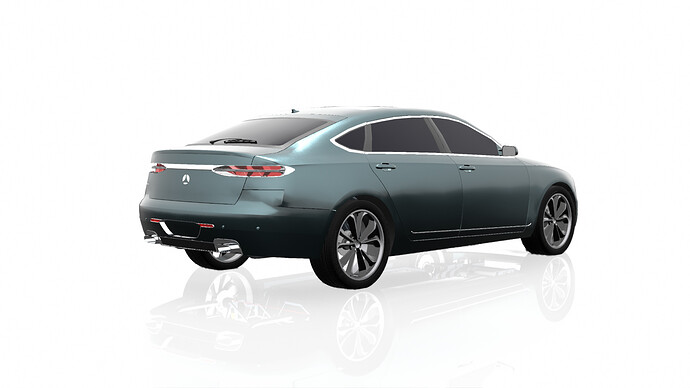 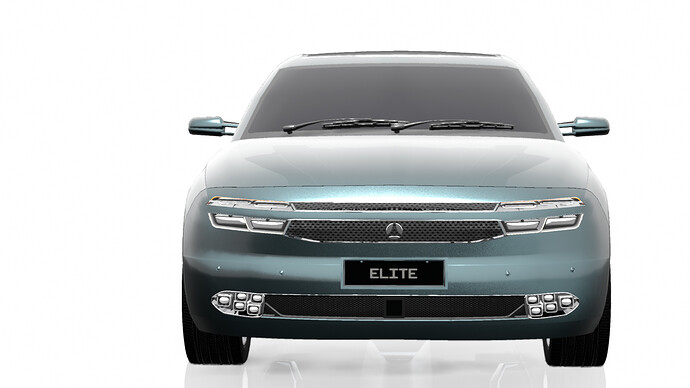 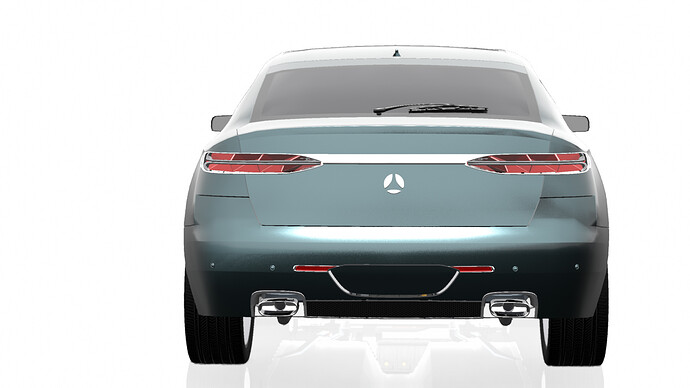 The only available trims (at the moment) are the following:

All the trims are FWD 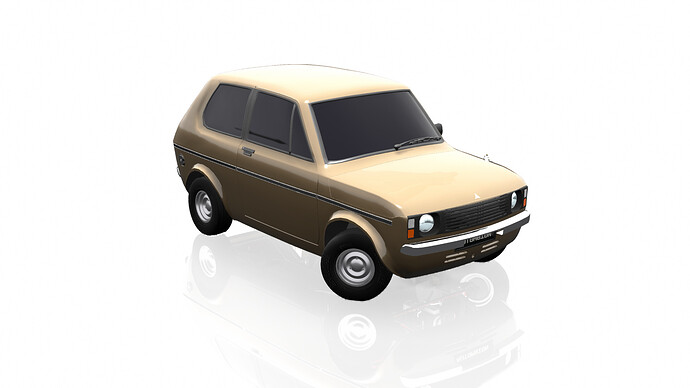 After Jipot-Falgot bought the brand in 1975, the first model it was the EL, that it was a rebadget Jipot J104, but with Gabatron engines: the famous L series family: a 4-cylinder boxer OHV engine. It was manufactured in Villaverde (Madrid, Spain).

That supermini car it was designed to be cheap, reliable and easy to drive in mind.

Both models used an steel monocoque chassis and body, with McPherson struts on the front, and semi trailing arm on the rear. 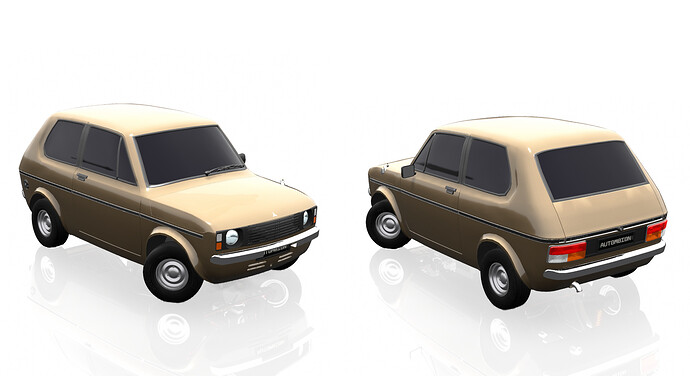 An EL 8, in Imperial Beige

The first phase it was available in two engines: the 0.6L (EL 6), and the 0.8L one (EL 8), feeded by a twin single barrel eco carb. And due the enviromental regulations, it requires 91 RON unleaded fuel. 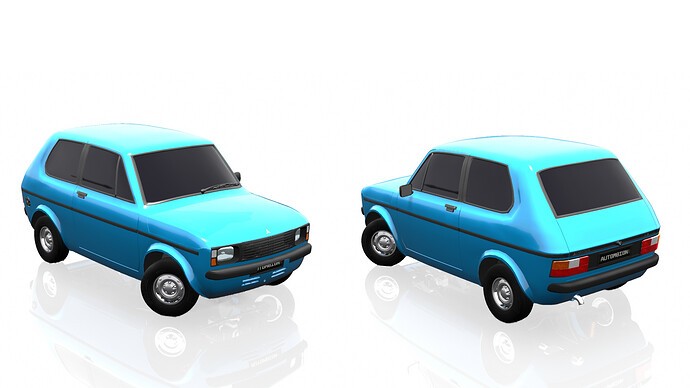 An ELA 8, in Bleu Tropical

The second phase kept the 0.8L engine (ELA 8), but discarded the 0.6, and switched to the 1.0L version of the same engine, feeded now by a single two-barrel carb: the ELA 10.

And in the interior, received a new dashboard design, headrests for the front seats, AM radio (extra), and a electric ventilator.