May 30th, 1958 - As the company celebrated its 10th anniversary, Toby outlined the plans for the company’s lineup for 1960. After a brief period of deliberation, he came up with the following suggestion:

In addition, all passenger cars will be offered with 4-wheel disc brakes, either as standard or as optional equipment, from 1960 onwards, and advanced safety equipment will be integrated into their construction. Front disc brakes will also be made optional on Transtar and Nevis.

When he showed this proposal to his fellow employees and colleagues, they unanimously approved it, since they were very enthusiastic about his grand plan for the company. Given that there were now more customers than ever before who were willing to buy a car with their own money, especially more upmarket ones, it seemed fitting that the Hampton Motor Group should target the upwardly mobile, especially in America. He began with the following speech:

“Greetings, everyone. It has been a full decade since this company was established. Back then, this factory had only just risen from the rubble, and a few years before that, I was being shot at from all sides during the D-Day offensive. Now, however, this country and its people are in better shape than they were in any previous year of this century.”
Toby’s colleagues roared with applause. He continued:

“It is therefore clear to us that, for the sake of upholding our reputation, our existing lineup of cars must be updated for the next decade, with more power and standard equipment without incurring excessive increases in price, and it will also be accompanied with at least one new model, which is currently under development as we speak. Given that other manufacturers around the world are also updating their model ranges, the timing of our updates could not be better, for it will allow us to remain competitive for longer. In a few years’ time, the world will marvel at the fruits of our labour. Until then, keep calm and carry on… working on our vehicles.”

As his ever-loyal employees returned to their stations, Toby returned to his office, sat down in his chair and whistled God Save The Queen quietly, before taking a nap and dreaming of the day when his company would make its next big breakthrough. 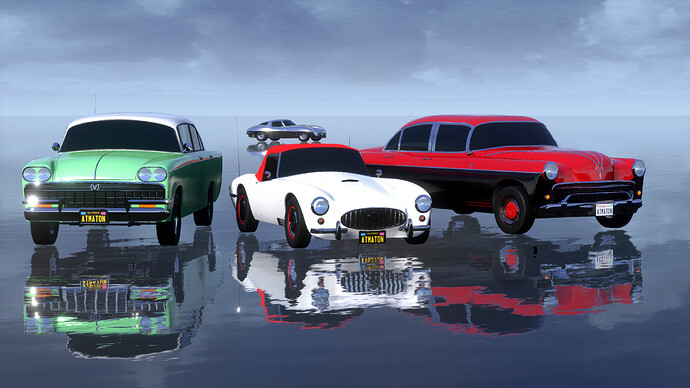 Not too interesting this time. 1 Reused car, the 200 Sedan but more Luxurious this time. 1 end-of-life model, the Durene SE in the middle, and the 2 years in 350, replacement for the aged 250. Also snuck in a concept into the background because why not. 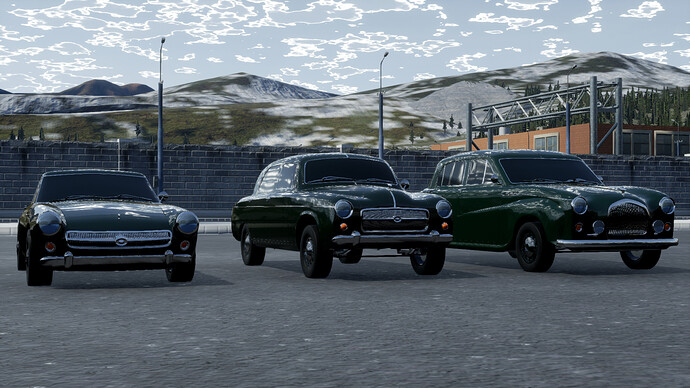 At Hampton Motor Group, we believe that continuous improvements are the key to success. To that end, we have updated much of our model range, with more power, safety and standard equipment. For example, our mainstream sedan, the Valiant, is now offered with either a 3.0-litre or 3.2-litre straight-six and can now be ordered as a coupe or estate. Meanwhile, the Peregrine is now available with a 3.5-litre straight-six, now developing 144 horsepower, or 172 if you order the Sprint Package. Finally, we have an all-new flagship luxury saloon for upper-class buyers - the Vanguard, powered by the same 144-horsepower straight-six as the standard Peregrine. WIth a more lavishly appointed interior than lesser cars in our range, it offers a sense of luxury that only the British can provide.

Please contact your nearest dealer for pricing and option availability. 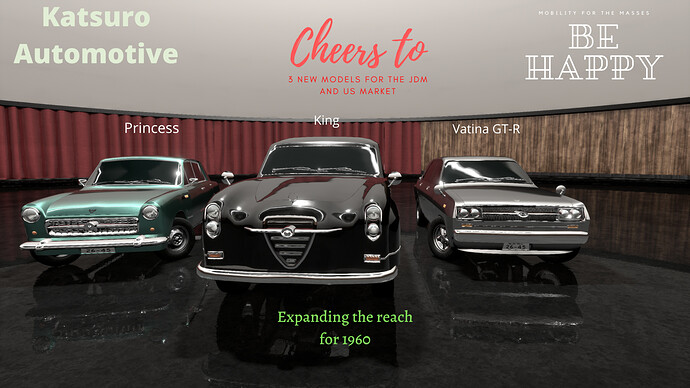 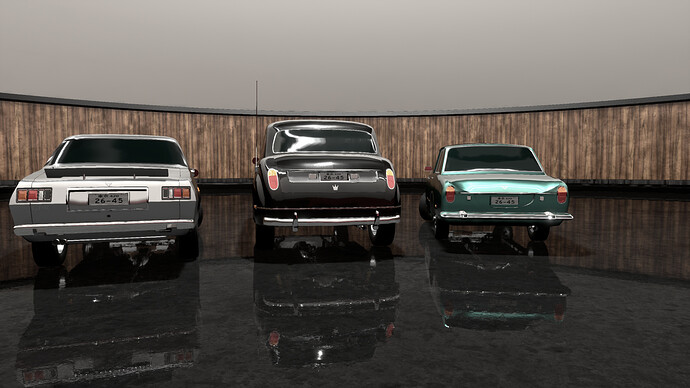 1960 sees KATSURO expanding its influence in the US market with 3 New models and the construction of a brand new high tech Factory. This factory will also produce Katsuro’s newest flagship model, the King as a statement to the commitment of its presence in the US market. The new factory also has 2 additional lines for a new affordable intermediate class car, the Princess powered by a 2.0l straight 6, and the Vatina GT-R, a new sportscar exclusive to the US and JDM markets only. 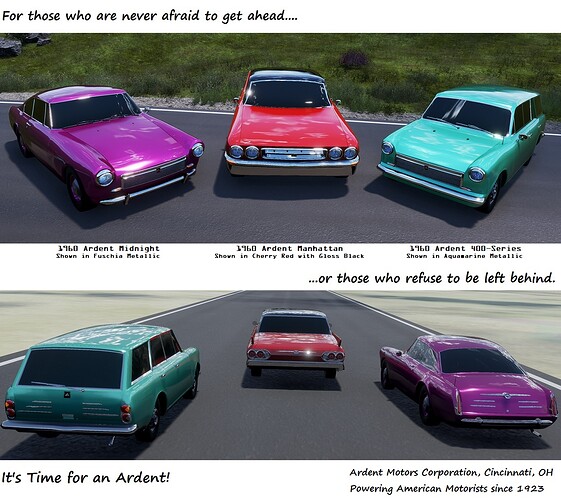 Meet the MY1960 Bogliq Model Range!

There’s a Bogliq model to suit everyone, so come on down to your friendly Bogliq dealer and test drive a Bogliq today!!!

Reminder: Just over 6 days left in the submission period for round 2.

An assortment of managers, employees and other staff are currently in a big room discussing further plans to handle Anhultz for the next few years.

Anhultz: “Okay… so from what i have gathered, Anhultz is facing some challenges…”

Rynsburger: “First off, most of our surplus profits are STILL going into the Rotterdam plant, leaving fairly little wiggle-room to keep the lineup up-to-date.”
Anhultz: “So no new models until Rotterdam is done?”
Rynsburger: “Pretty much…”
general disappointment in the room
Rynsburger: “…but there are enough funds to facelift/ alter current models at the expense of some sales potential…”

Anhultz: “There has to be some good part to this…”
Rynsburger: “Those current models are near the top if not AT the top in terms of sales, soo… they should last us a while.”
disappointment gone
Anhultz: “Good. I want that factory done AS…”

the room is stuck in confusion before realizing. then the serious meeting turns into a house-party in like 15 seconds.

i have ran into a bit of an issue for round two.
Anhultz doesn’t really do sports cars aand… i have come up with various ways to deal with it.

changelog:
basically rewrote entire post cuz it was a clusterfuck of characters…

Perfectly legal is #1. Remember, there was a Utility entry from last round that was a sedan. It was the closest thing they made, in lore, to a utility.

#2 is legal as long as your lore states you own at least 25% of the company you’d be importing by the year that you’re trying to import it. Given how long until Anhultz takes over Keika, and their general status as “recovering after the war”, it still seems a bit early to me to have that be realistic. It’s technically, legal, but shady. (Edit: For comparison, I can’t use Suzume cars as captive imports until 1974)

Options 3 and 4 are not legal. While I may not know, it’s a matter of integrity on your part. So I’d say probably not.

You missed option 5… not submit in that category. You will get, effectively, a 40% score. This may be better than submitting something horribly out of context, or it may not. (Last round, companies split the difference on this one)

Option 5 is, in terms of public opinion, “They don’t have one now. I’d love to see them build one. I wonder if they’re developing one?” It’s also not an option you want to use on a regular basis, because it’s hard to come back from if you do that more than a couple times.

Your car would only be four years in advance of the (theoretical for Gen II) Pontiac GTO, plus the first successful idea is usually prefaced by a bunch of almost successes. The GTO was the first, genre defining, muscle-car but there were predecessor cars which could have fitted the bill. I’m thinking cars like the Hudson Hornet and the 1957 Chevrolet 150 w/ optional V8 and manual gearbox…

But, if it just doesn’t fit your lore then do as @VicVictory says and submit either nothing or a luxury saloon that’s fast (think GT category) or, like the 1957 Chev, a volume selling car with a particularly speedy set of options!

I loo forward to how you choose to proceed

1960: Watson Motors continues it development. Our engineers work tirelessly to improve the quality and robustness of our chassis and engines. This year Watson Motors is launching three new models:

There were indeed a few ideas for somewhat small-ish sporty coupes in America, before the GTO and Mustang and such. 1957 saw the Rambler Rebel, an intermediate with a fuel injected V8. There was the Studebaker Hawk from 1956 onwards, which had a four-barrel-dual-exhaust V8 (pretty much the optimal GT car for automation), and 1961 saw the Buick Special “senior compact” with a 3.5 liter aluminum V8.

You could easily pep up your smallest coupe and give it four premiuim seats and a manual transmission.

A little over 72 hours left in the submission period. I do not have submissions from: 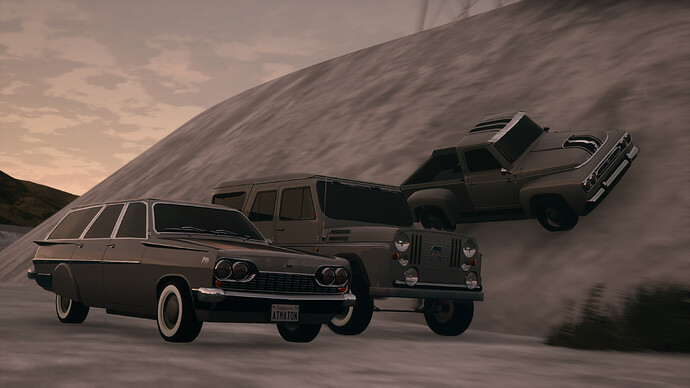 -DaH Goonie
The newest addition to the Deer And Hunt Lineup. Perfect for everyone how just needs a reliable car.

-DaH Hawg Deluxe
For people who rather crawl thorugh your neighbours front lawn than the wilderness.

Aldeane Automotive Company has withdrawn due to computer hardware failure.

I have decided against trying to do more “conversations” between executives, and other role play, simply because working in the industry that is 100% not how decisions are made.

Anyway, for 1960, the Earl Motor Company brings us many stylish, reliable, competitive models! 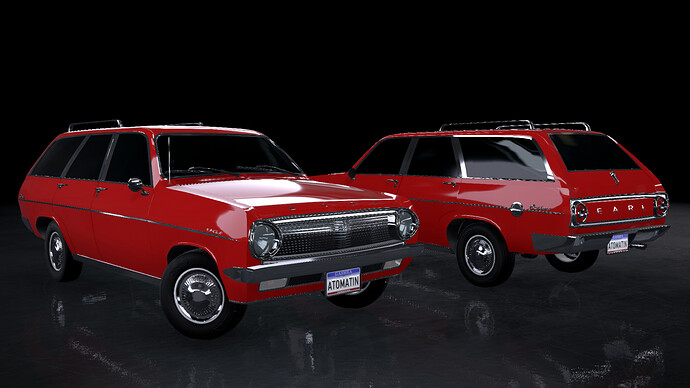 Photo1721920×1080 459 KB
The Earl Eagle Custom Wagon - Intermediate Entry
The Eagle is the family car of tomorrow - easy to drive, easy to park, with room for up to six in a pinch (delete option front bench required). The huge rear cargo area of a wagon only improves this capability. A standard 100 gross hp Black Smoke Six engine and 3 speed manual provide efficiency and utility, but optional 115hp engine, 2 speed automatic, and power steering can make driving a breeze. 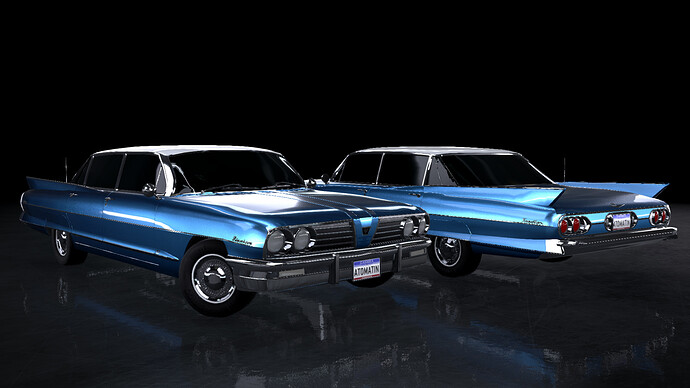 Photo1711920×1080 469 KB
The Silverhare Cavallaro - Full Size Entry
Stable, Secure, Stylish, & Safe. The Cavallaro is the luxury car without the luxury pricetag. The largest car you need, with the largest engine you need, and the most conveniences you want - but nothing more. Be the gentleman of the open road with so many smartly chosen standard features that the only thing you really need to pick is the color. Standard with a 230 gross horsepower V8 engine and three speed automatic transmission. 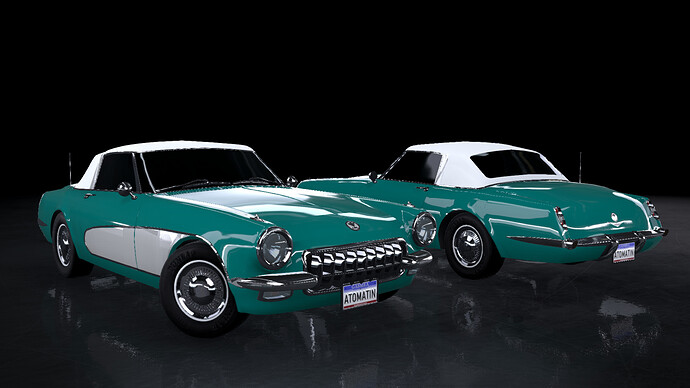 Photo1701920×1080 416 KB
The Earl Banshee - Sports Entry
The Banshee is the American made car that provides the fine sporting driver’s experience of a European road car. But more than that, it maintains the comfort, value, and drivability of Earl’s finest vehicles, but most of all our company’s unmatched reliability. Truly, the best of both worlds.
11 Likes
thecarlover 21 March 2020 19:03 #172

So is the deadline Sunday the 22nd or Monday the 23rd? 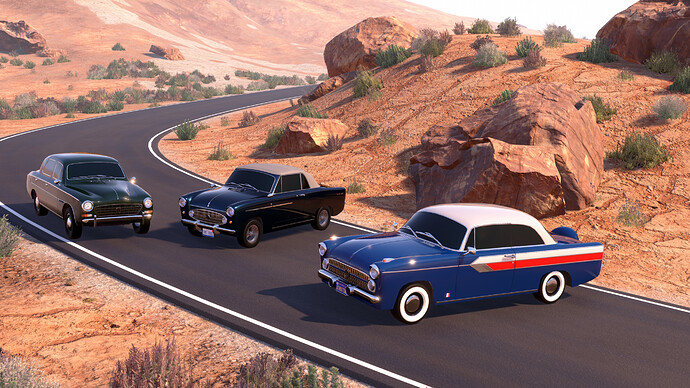