pick one… i assume

@Mr.Computah - If they’re companies owned by the same parent company, that would be a “captive import” situation. If you’re talking about between players, for the sake of my sanity, I will have to say “no” to that idea.

@Elizipeazie - PM me your situation and I will consider it.

@Mikonp7 - As review magazines typically only get one car to review, pick your preferred trim for submission. It will be placed in a class accordingly.

Will we be posting advertisements, or just lore, or both

Ads in this thread, lore in the lore thread. Ads don’t have to be anything particularly special. a picture and a few words is fine. But if you guys put more effort into it, it elevates the whole thing.

The war is over, the troops have, for the most part, returned home. The economy is changing from war production to peacetime economy, causing a bit of a flux, but unemployment is still very low. Suburbs start springing up all over the place, attracting returning servicemen and wealthier families.

Model: Gen1-(username) Trim: (MFR Model Trim)
Engine: Gen1-(username) Variant: (Whatever you want)
Export and PM me the .car file, make a post about your car in your lore thread (if not already there), and post an ad in this thread BEFORE the round deadline.

If your company hasn’t registered for the competition yet and you want to participate in this round, please PM the required company information as well as your submission prior to the round deadline.

Alright, buckos! Let’s see what you’ve got to kick this thing off!

New from Britain for 1946, the Epoch Model 10 delivers something that’s been missing from the world today - equality and style. Beneath the handsome looks lies a practical and dependable vehicle that you can rely on to get you to where you need to be, on time, every time. With a forgiving nature and engineered safety, you can feel confident that the Model 10 will handle the road with ease.

Experience the quality that is Epoch for only $380, and you’ll see why we are a household name. 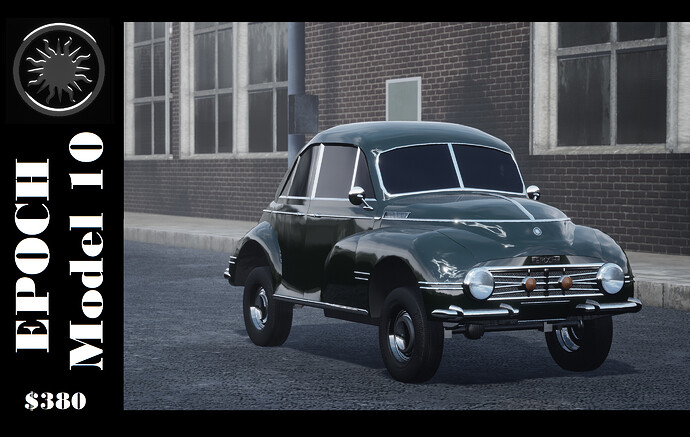 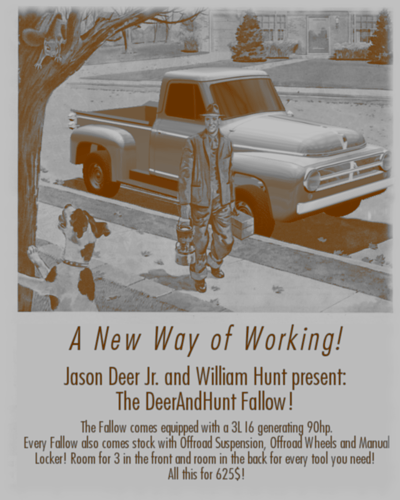 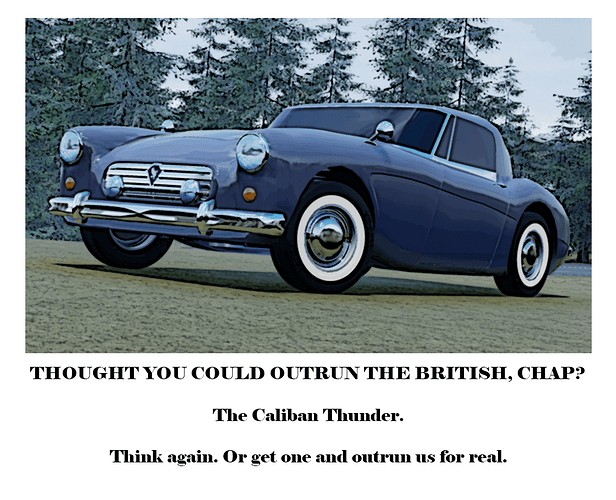 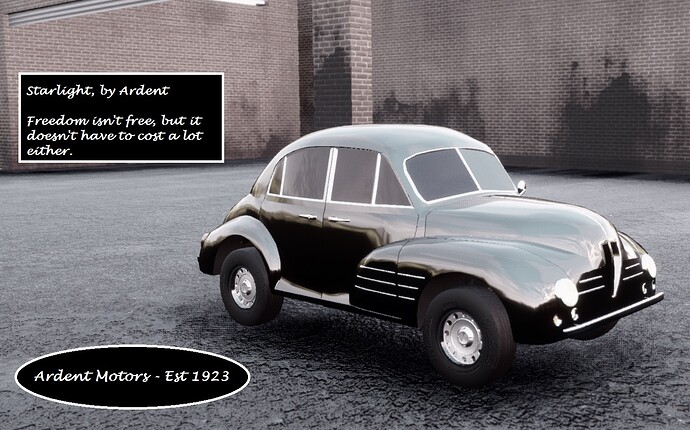 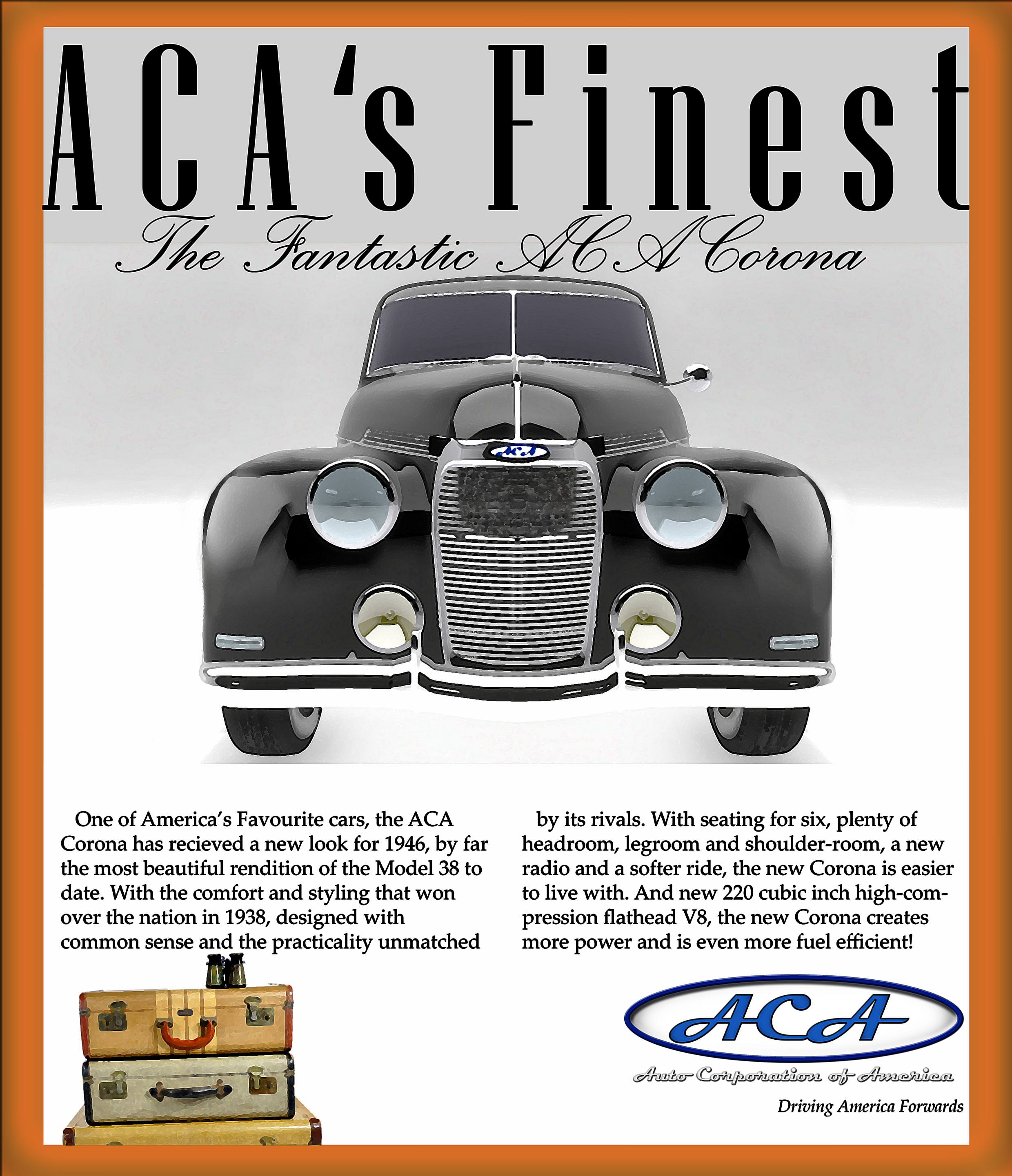 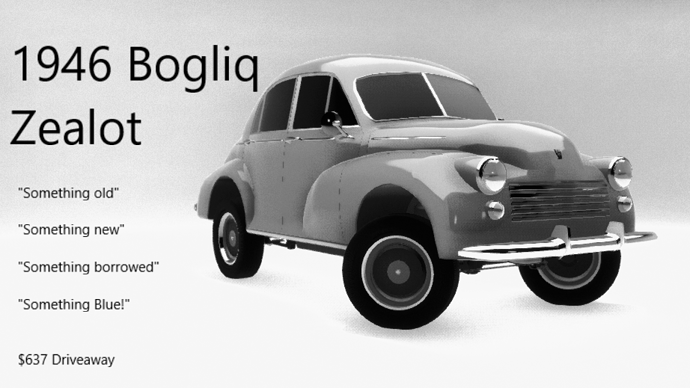 Check out the Zealot range here! 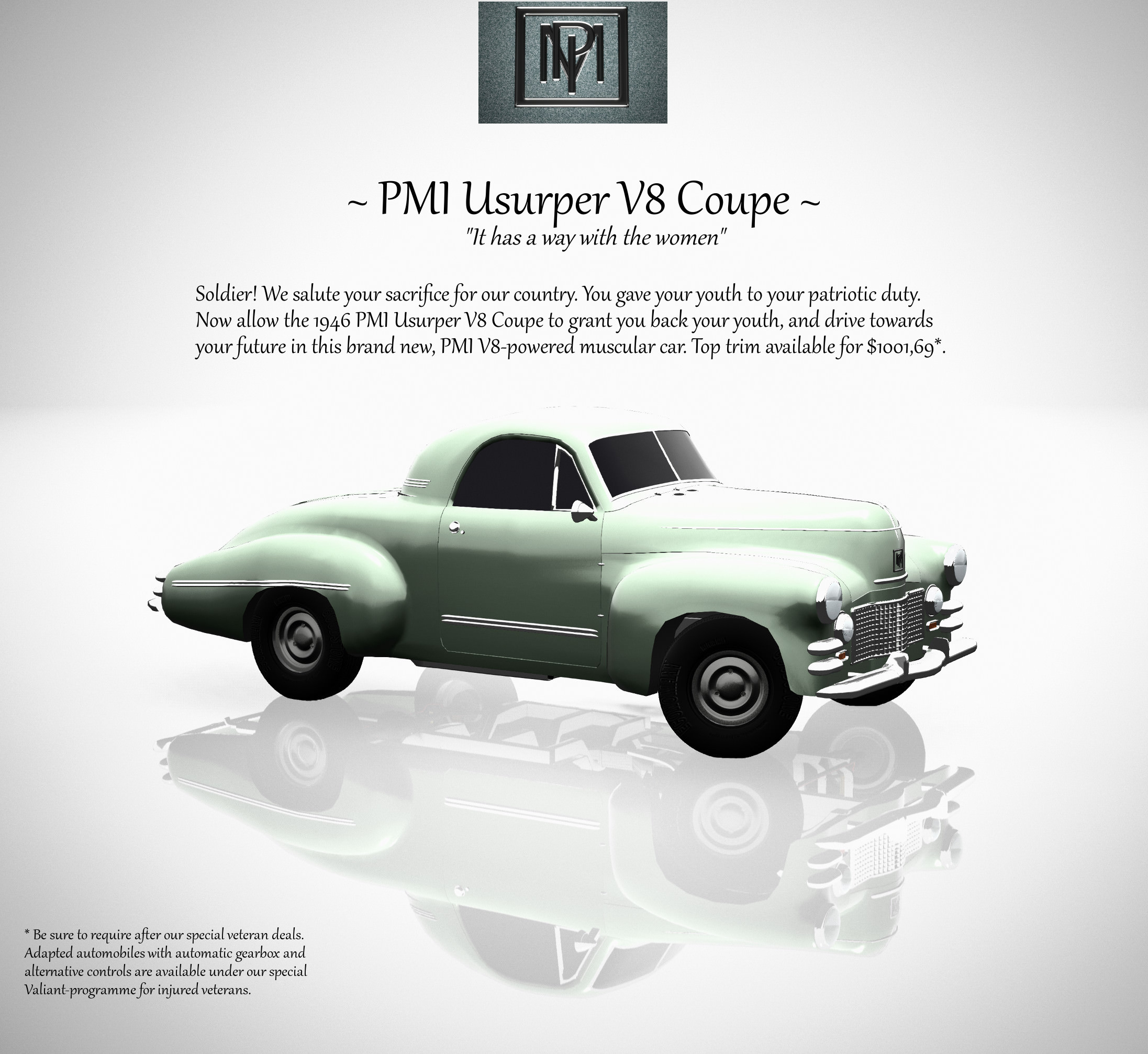 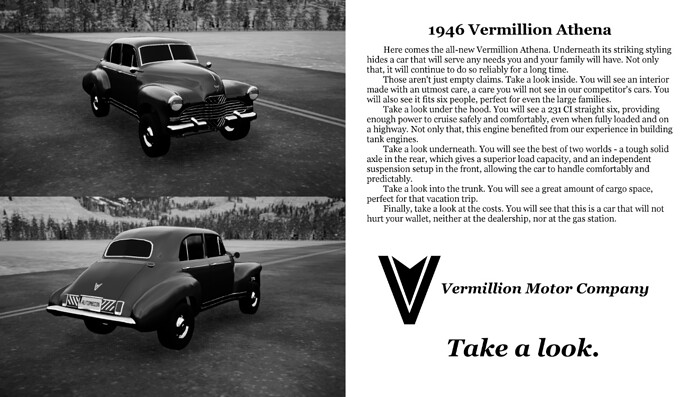 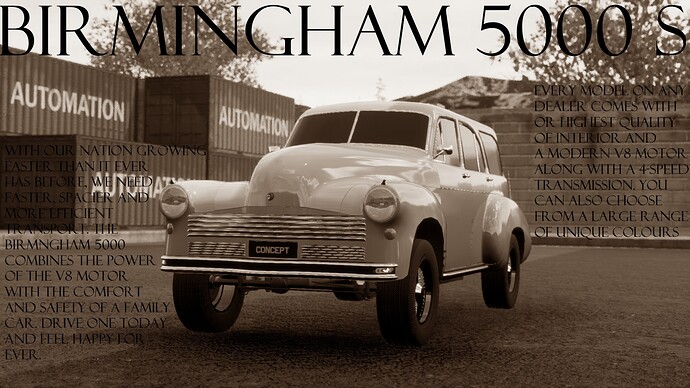 48 hours left to go this round. If you have submitted a car but not received a like on your PM to me, it means I haven’t actually received your entry.

“Yes, Clarence?” Jack replied without glancing up from the stack of memos before him.

“Have you read the business pages yet today?”

“No, Clarence. I’ve had a little too much on my plate.” Jack continued reading a memo regarding the contract statuses of dealerships in Pennyslvania. A few lines in, he had a feeling that Clarence had more to say on the matter. Jack glanced up, catching the worried look of his timid assistant. “Spit it out.”

“S-sir, looks like we have a new c-competitor,” Clarence stuttered.

Jack took his glasses off and set them on his desk, then leaned back. “You going to finish that thought?”

“B-Bogliq is planning to build a new sedan here in the States.”

Jack scoffed and turned his chair slightly. He stared blankly out the window at the smokestacks of his factory. “Not content with sticking to those military trucks anymore, I guess. Well. No matter. They neither have our design depth nor our capacity.”

“That will be all, Clarence. I’ve got more important things to deal with right now.”

The assistant nodded and scurried away.

@VicVictory The list of companies in the OP seems to need an update, I think.

Clouds were sieging the skies of Cardiff, the streets of the town surrounding Lord Mach’s residence. The rain soon created a thin curtain covering the windows, the raindrops slipping in the windows as Mach watched the phenomenon take place.

Mach sighed once. It had been weeks since he had sent the letter to the import agent; he had been given no guarantee of their ability to handle it, but this was his only chance to make his project famous worldwide. He opened one of the drawers in his office table, going through former invitations to celebrations, feasts and festivals, instantly remember how these festivities forged him a reputation as a womanizer.

Someone suddenly knocked at the door. It was Zacharias, his economic advisor; an old man, clad in the most elegant of suits, a symbol of who he worked for. He salutated Mach elegantly, yet respectfully, as the door creaked open.

Zacharias: “Sir. A letter from the import agent arrived.”

Mach: “Have a seat, Zacharias.”

As he was given permission, Zacharias gracefully let himself fall on the leather seat he was offered. He handed the letter over to Mach, how impatiently broke the wax seal, opening the letter and reading it hastily. He seemed to calm down as he read through the words, the trembling on his fingers dissappearing; by the time he had finished reading the text, a slight smile had drawn on his face.

Mach: “Zacharias, is everything ready?”

Zacharias: “Yes Sir, the engineers have already brought in a few workers to help at the workshop. At this rate we will be selling our kits in the United States in a matter of a month or two.”

Mach: “Excellent. What have you found out about the market there? Potential competition?”

Zacharias: “It does not seem like our target market is bloated, Sir. We have the advantage in that regard. However…”

Zacharias: “There’s several stablished companies there, Sir. Auto Corporation of America, Ardent, Deer and Hunt and Bogliq who is trying to get their share as well.”

Mach smiled slightly, resting his back on the worn leather seat he had inherited from his grandfather.

Mach: “I want an agressive campaign in the United States. Let these companies know we are coming and we are a force to be reckoned with. Acquire some of their models to find flaws if necessary.”

((OOC: Mach wants to start an agressive marketing campaign, I’ll let you guys play it out however you think it should be played out

The war has been over for 5 months. Normal production returns to the ACA factory in Lansing. A factory once churning out weapons of war is now once again producing cars for the general public.

Conway: That’s not good enough. Can’t you change the tooling faster? All our rivals have already got their tooling ready. What’s holding us back?

Burton: With all due respect sir, our factory workers have been working their asses off for the last 4 years. They at least deserve a bit of a break. Besides…

Conway: Besides what? Look, I know the war’s been tough. But we need to get the factory back up and running. Every week we aren’t making cars, we lose money. Every week we don’t make cars, our rivals are encroaching our market. If we could retool our entire plant to make five different tanks in less than a month then how the hell can’t we return it to what it originally was in 2 months.

Burton: Aight sir…I’ll see to it.

Conway leaves the factory floor stepping into his office. There his secretary Louise sat waiting for him holding a pile of letters.

Louise: Sir I need to to sig…

Conway: Yeah, yeah I know. I told Mr Garcia that I’ll send him the invoice later.

Conway flicks through his mail taking note at the “interesting” news

Conway: Damn, not again. Louise I need you to send a letter to Jonathan. Tell him to stop lowering the prices on the cars at his dealership. If Ardent Motors wants to undercut us, let them. At least we’ll be staying afloat. Wait. What? Bog…Boglick? Hey Louise, am I saying it right? Bogliq. Got it. A Moldovan company…in the US? Is this a joke? Please tell me this a joke Louise?

Louise: Sir, Bogliqs are those blue cars that Sherrie and Caitlin drive.

Conway: Oh so those piles of junk. Right got it. Ooh, a British kit car company. Meh. Who the hell wants to buy a car sold in pieces. This Lord Mach guy’s a joke. Does he honestly think his car’s are gonna sell here. You know what. Louise, send that guy a letter. I’ll offer to make his cars for him and sell em here. I’m sure those Whittingmore brothers want something to do. I’ll make them give that thing a proper V8.

Louise: Is that all sir?

Conway: Yeah…wait. One more thing. Tell Harper to hurry up in designing the replacement for the Model 36 Truck. Deer and Hunt have us beat in that regard. I want it to be designed and in production ASAP.