I’ve been witnessing a phenomenon in high-pressure turbos in my BeamNG Drive ported cars lately that I’m christening ghost turbo lag. It’s happened on two engines, an inline 3 with a 20-25 odd psi turbo and a boxer 4 with a twin turbo 55 psi setup. Here’s the most detailed account I can make:

In BeamNG, there is a turbo boost gauge UI App above the speedometer as default. I think either my car is bugging out or it is. What I do is floor it in neutral, then shift to first. I get a burnout, then it starts to accelerate. Now, when the turbo boost gauge hits 55 psi then I should get a sudden boost of power. Yet it takes around 5 seconds for that boost of power to occur. None of my cars before this with high pressure turbos have ever done this. It’s like what I said in the title: ghost turbo lag. This isn’t a huge issue, but it really really really gets on my nerves while driving. Woohooo! 55 psi! We’re gonna go SUPERSONIIIICCCC- nothing happens. Until 5 seconds later.

I’ve also noticed another anomaly in both the cars with the ghost turbo lag: when I floor it in neutral and shift to first, the RPMs drop drastically down to 1000 RPM when in first, like I had never floored it. It’s not TC or ESC or anything, I had them turned off. It makes it impossible to start a drag race competitively.

Both of these cars are AWD. The inline 3 has 300 hp and the boxer 4 has 1200 hp. If I go into the engine designer all of the things like valve float, piston stress, etc. are at 0% with the exception of the conrods on the boxer. The engine isn’t knocking or anything. I can’t imagine at all why or how this is happening. It doesn’t happen in the testing in the car designer. Is this a known bug? An anomaly when exporting to BeamNG? Or is this new? Please tell me in the replies.

What does the turbo map show?

In a twin turbo Boxer 4, no less! I had to make it a Boxer to fit my small engine bay. 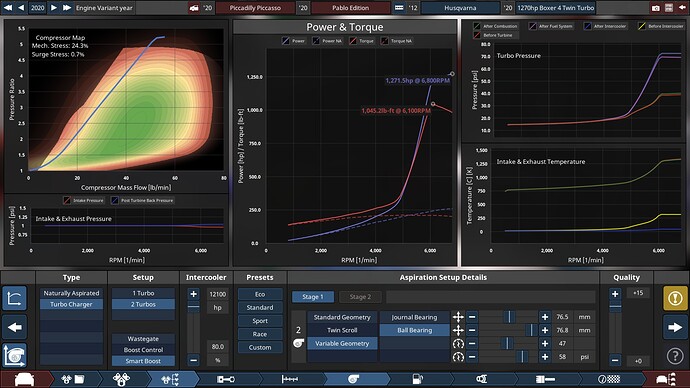 Don’t ask why the family is “Husqvarna”. I’m allowed to have my own alternate universes, aren’t I? 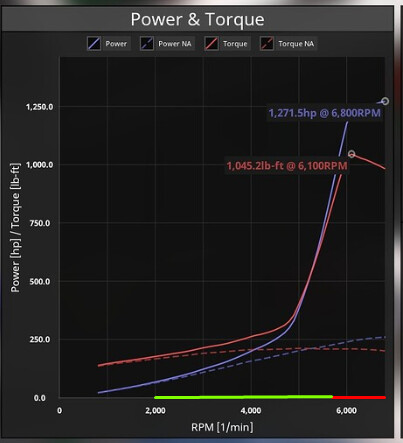 It takes you five seconds to go through the green bit, where you get .5s of power.
You have quite literally 500rpm of useable power, doesn’t matter if the turbo is spooled or not, you need to be in that rpm range for it to even consider doing anything.

Iow Beam is modeling it perfectly. Also you can see from your turbo map that the turbo stress is very high, and the performance envelope (the bubble) is showing you the turbo’s range. You are not in the bubble with this engine. So, not a product defect.

Is there a certain way to fix that? Or do I need to completely re-tune this engine?

Move the sliders to here, ish. you might lose 50hp or something, but you’ll gain 2-3000 rpm of usable power.

Alright, give me a sec to boot Automation…

Depends on the engine you want. If you want a tractable, driver-friendly design, yeah you need to rethink the whole thing. If it’s a race to see how much HP you can make (I didn’t say usable HP though), then you can probably back it down some to get into the “zone” of the turbo map. Start with the presets and see what you think. The compressor and turbine are not normally the same size, for example. And a turbo boosting to 58psi is a,…well it’s a bomb.

Doing what @Riley told me gives me 90 hp more and this:

image743×176 20.5 KB
Me 10 seconds later - scratch that. Intercooler was too big and that somehow affects the engine header temperature?! Okay?! Anyways, now my curve looks more like this: 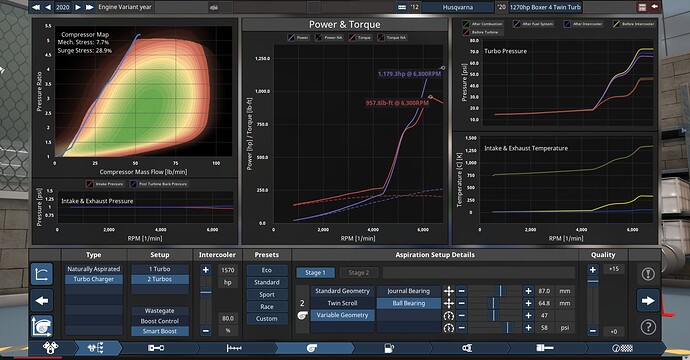 You can try adding more quality to the exhaust, increasing compression and adding more fuel ratio, as well as race headers if you haven’t already
This is from the discord as a command, the discord itself is useful for tips from other players who might want to help you as well, so I recommend joining it. 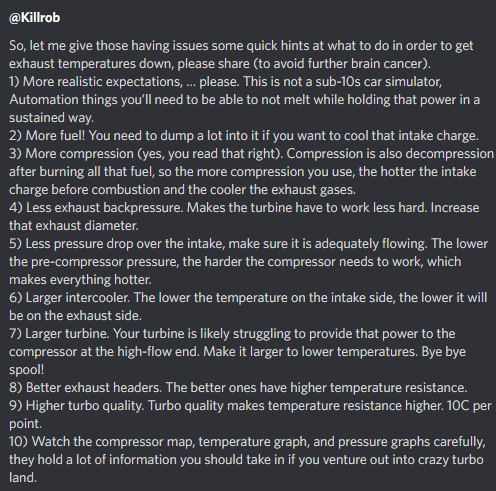 You are now worse. The stress and surge is higher. What’s the goal of the engine?

It’s a 90s Italian supercar engine. Boxer 4 might sound like a weird choice but it’s the only engine I could get reliable performance out of and be able to fit in the engine bay. Meant for production of around 300 units.

After mildly retarding the ignition timing, realizing there was a twin exhaust option and removing both my mufflers and cats (no idea why I installed them in the first place) my curve looks a lot smoother. However it still looks like I’ll have the previous problem. 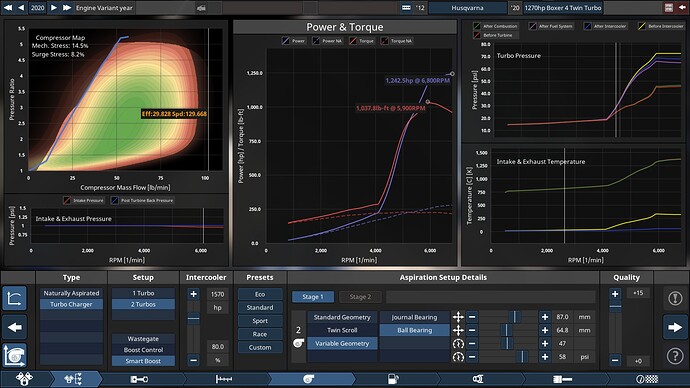 Testing in the Engine Builder reveals two things: one, twin exhausts on a boxer 6 sounds absolutely phenomenal, and that 5000 RPM is where I get anywhere above 500-600 hp. Feels kinda like VTEC tbh.

image877×244 45 KB
Just need to adjust here and keep bringing these down until it explodes or you get it where you want, do like a couple clicks at a time or so.

You can try using less cam profile as well.

Alright, update: I got lazy and clicked on the Race preset to see if it solved my issue. Power is down to around 700 hp now, but my curve is a lot (and I mean a LOT) more normal. Turns out that no intercooler gains +200 hp and doesn’t cause any cooling issues? Damn, this game is weird.

It’s a bug and an exploit bug at that.

If you can get your turbo out of the surge and mech stress regions, you are gtg.

And
If you are looking for a car that really is fun in Beam, make engines that have large areas under the performance curve. Less peak power but more power area. It will be far more controllable of course, but also the feeling of speed will get you. You can also use vvl and really wide cam phasing to gain a lot of area under the max number.

One of my favorite engines is a 3.0 V10, over square to the limit, twin turbo with “mild” turbos and mild boost. The compression is relatively high, the turbos relatively tame. The result is an engine that revs to the moon, max HP only 570ish on pump gas, but the area under the curve means from 3k to 9.5k, the engine has torque and hp everywhere. In Beam, it just accelerates forever on any gear, and turns in great lap times while rarely eating a wall due to the tires being overwhelmed.

The original problem is that BeamNG Drive and Automation calculates turbo behavior very differently.
Should improve with the new engine calculations coming to Automation soon.