This is a general leaderboard in the same spirit as Jakgoe’s Automation Test Track Lap Times and Pleb’s Automation Airfield Lap Times.

Send your car around the ‘Green Hell’ (many thanks to Der Bayer for making it), download it here, record the lap time, then you MUST PM me a screenshot of the test track time. (also, a screenshot of your car’s stats would be helpful, but isn’t necessary) so it can be put on the lap board. You can post your cars to the thread if you wish, but if they haven’t been PM’d to me they won’t go on the board!

#Please note, the rules regarding Production Car Class are subject to change, therefore, I shall not be posting times of this class for now. Just go nuts and see what you can do!

If you have any suggestions or feedback, feel free to PM me. If the rules or the game build changes, the leaderboards will be reassessed and entries updated accordingly. 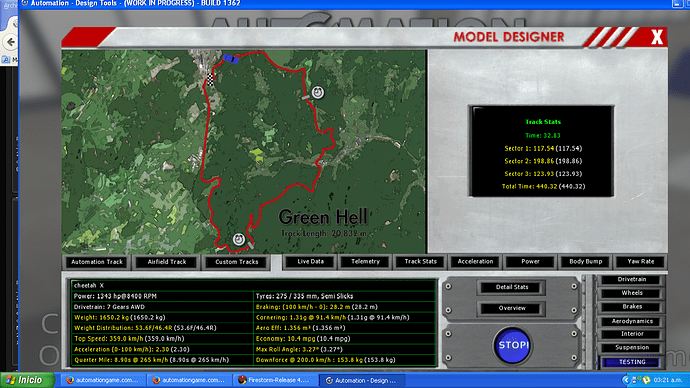 I present my white monster the YCB chimaera 10 Litros X

Next time don’t forget to pm me the screenshot and details Manche! This time around I have enough to work off.

I couldn’t PM that pictures so I show it here: 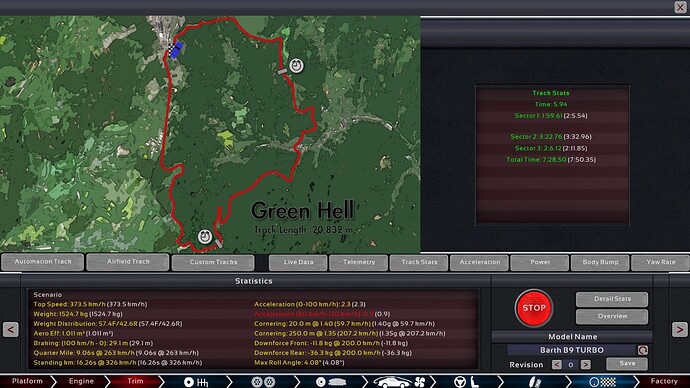 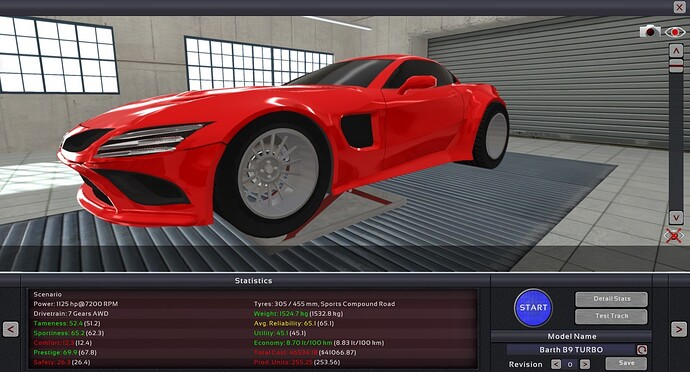 Production car - Barth B9 TURBO
It is high performance car, so it drives on semi slick and it’s not illegal. I know that the rule forbidden semi slicks, so I send it once more to the track on sports compound tires with higher quality. It gave similar time like standard semi slicks.

Above screenshot is acceptable because user has PMed me about technical difficulties.

That being said, can I just be sure that you didn’t use race exhaust? That’s technically a limitation too (at least, for now).

This is turbo version, so I can use only short cast headers.
And there are also high flow catalytic converter and two straight mufflers. 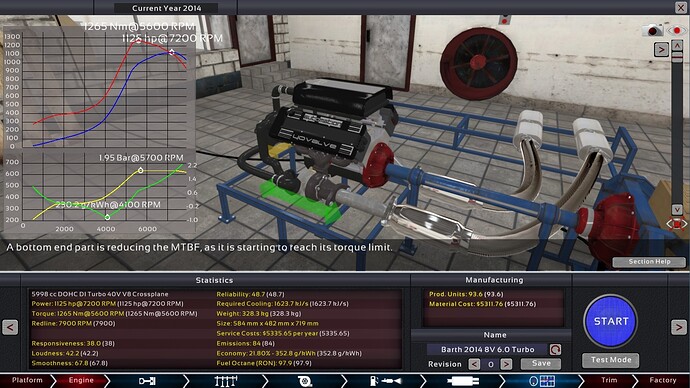 I have a new entry for the Race Category

I made sure the times stick when I reload, by restarting the game and it’s fine. 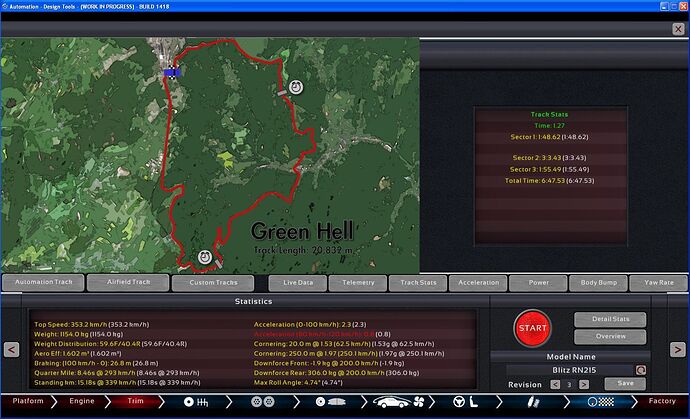 Ahem, Strop, you seem to have added the Blitz to the wrong leaderboard.

I’ll have an addition for you soon enough myself.

Yeah nah CNSpots, actually that time IS the production version. I’ve verified for myself that on some bodies, it is possible to make a sport compound tyres only car get around this track in under 7 minutes.

The crazy 6:47 time belongs to the race leaderboard, it’s going up presently.

[quote=“strop”]Yeah nah CNSpots, actually that time IS the production version. I’ve verified for myself that on some bodies, it is possible to make a sport compound tyres only car get around this track in under 7 minutes.

The crazy 6:47 time belongs to the race leaderboard, it’s going up presently.[/quote]

Oh my bad! I didn’t notice the lack of the P on the screenshot posted!

I interpret this class as being “road legal models” which includes sport-modified variants of mass produced models, but they must still remain road legal!

Just a thought but I think that a production car should not be allowed to get a race intake more than a race exhaust (that I would allow), why? mainly reliability… and a way to get a better gap between race/prototype and production cars in their lap times… but it’s just a mere suggestion.

Yeah, we’ll definitely be revamping these rules (Jakgoe and Pleb also run a leaderboard, I’m merely running mine in the same manner they run theirs), around the time of the release!

One thing that sorta bugs me about these however is what happened with the Airfield Track; People tend to build time-attack style cars and then slap on the regulated sports compound tires and call them Production vehicles. Which isn’t really in the spirit of a production vehicle at all. And it just sorta kills any possibility of even a ridiculously fast car getting to the top of the board unless it’s tailor made. Hammering this in is that the Pagani Huayra which holds the real life record on the top gear track (Which they allegedly cheated for, mind you, on hand cut slicks) isn’t even in the top 10 as far as the automation board goes. And we don’t even have active aero or advanced brakes or any of that high-end gear that real life cars possess these days.

I don’t like the concept of punishing people for having fast cars, but I think an effort should be made to keep the production car leader board in the spirit of things.

Here comes a ‘hottie’ hatch, a production radical car (2 seater) for customers that like extreme feelings behind the wheel.
Axsar RS in aluminium. 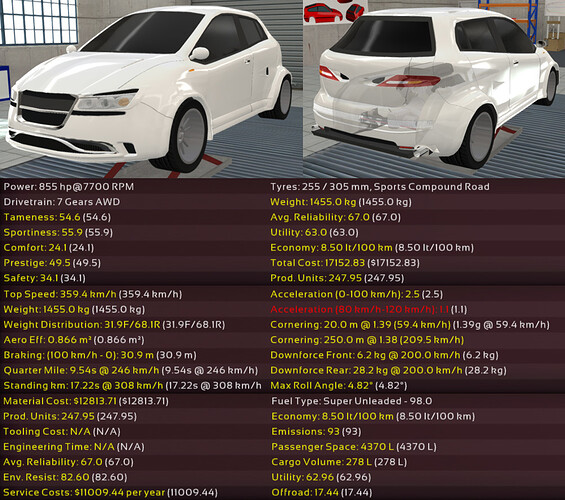 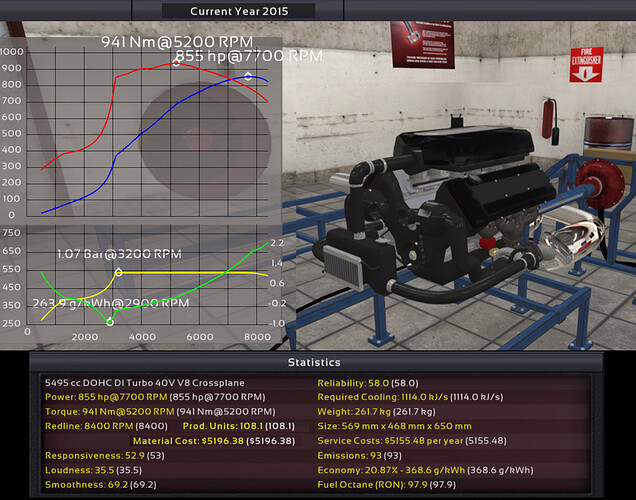 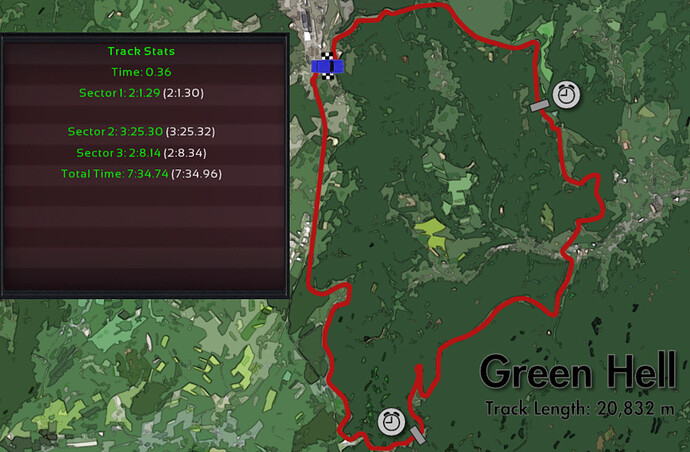 Why don’t you try sending a PM to strop instead?

The sad truth is, chlumsky did… A few weeks ago. In turn I PM ed jack and pleb about readjusting the rules of the leaderboards but neither of them have replied!!!