Guide: How to Export Automation Engines to Assetto Corsa

Here a Video to Demonstrate it:
youtube.com/watch?v=WX8EvV5LEr8

(Note: It only works for Naturally Aspirated Engines. If u want to export a Turbo engine u wont have Turbo sounds ingame.) 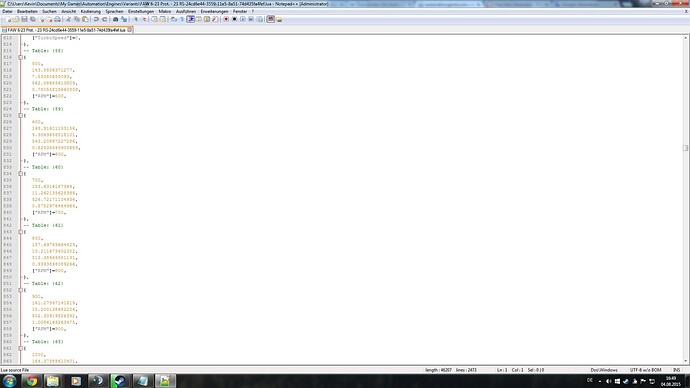 For now Minimize this window and go to “Your Steam\Steamapps\Common\Assetto Corsa\content\cars\Car you want to edit\data” But is has to be a Downloaded Car.
Look for the “engine.ini” file and right click on it and choose “Edit with Notepad++” again. (Maybe u want to make a backup first if you would like to have the original engine files back.) 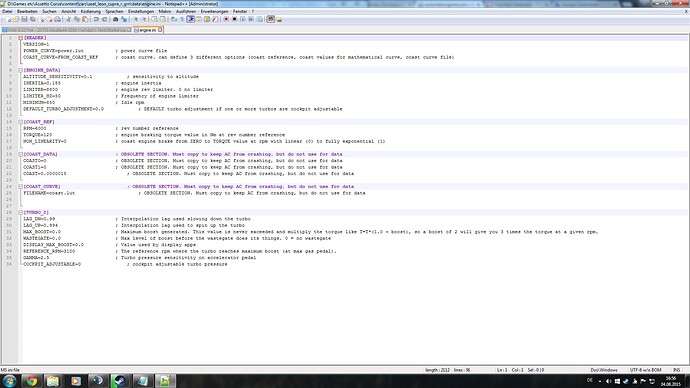 Here in this File u can change the rev limiter and the idle rpm in my case it’s 8800rpm / 850 rpm.
Now u have to change the Turbo “Max_Boost” to 0.0 and Wastegate to 0.0 so there is no Turbo activated.
further down there should be this section(Not on the screenshot):

I Think this is self explaining because everything is explained to the Right.
Save and close this File now after u changed everything u need.

Search the “Power.lut” file and choose “Edit with Notepad++” 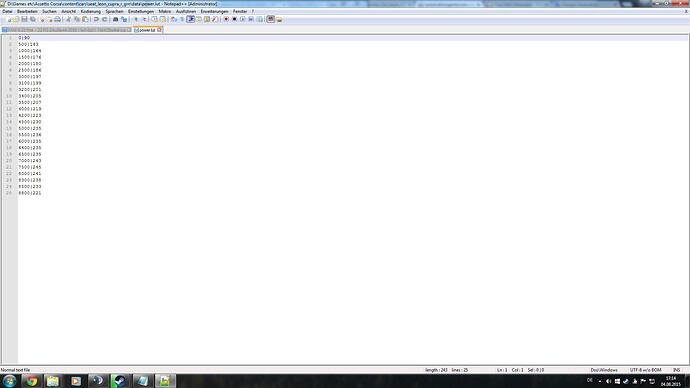 This is where we need our Engine File again.
Now this is pretty simple. On the left is the RPM and on the right the torque in Nm like in the Automation file. 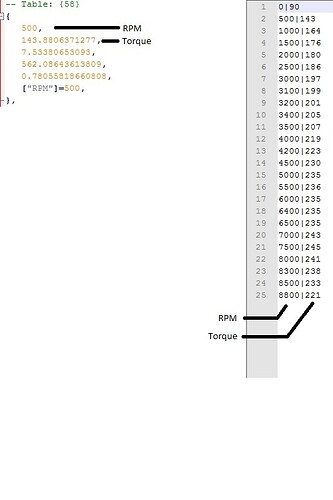 now only transfer the torque from the Automation Engine file to the Assetto Corsa Power.lut file.
When you are done only Save and close the “Power.lut” file and you are ready to Race.

Thanks! I can’t wait to try this out.

I’ll also see if I can figure out the boost and handling files, there are a couple of similarities to Beam.

EDIT: Something I rather quickly discovered, is that the DATA files for the cars are actually packed in a .acd file. It’s possible to extract these, but you have to do a bit of groundwork first. My impression is that the most reliable way to do this is using a custom script that plugs into Quick BMS.

Nice id didn’t think it would be that easy.

Just to add this method should work for anyprevious generation sims like the Race07 series rfactor and i believe Gamestockcar. Just edit power.lut on desired car.

Okay, I went through it and while it’s hardly the same as making your own car, it’s a good place to start to learn how altering various settings will alter the behaviour of your car. To equip yourself to modify the files in detail, here are the recommended steps, as far as I can tell:

[ol]]This works best if you have not moved your files from their initial installed location. At the very least ensure that the file tree is the same, or the paths may get messed up./:m]
]Download QuickBMS. It’s a file extractor and can work with multiple formats and games, depending on if a script has been written for it./:m]
]From the same page, download these two scripts: Assetto Corsa Acd . Assetto Corsa DATA.ACD extractor (script 0.1a) . rot, Assetto Corsa Acd Rebuilder . Assetto Corsa ACD rebuilder (script 0.1a) . rot. You can examine the scripts for yourself and as far as I can tell it won’t do anything dodgy!/:m]
]Now run QuickBMS. It’ll ask you to load a script. Start with the extractor./:m]
]QuickBMS will ask you to nominate the input file. Find your car folder (refer to OP for the path). In that folder, you will find the file data.acd. This is the file that needs extracting./:m]
]QuickBMS will now ask you to nominate the output folder. Create a new folder, let’s keep it simple and call it Data. Now click SAVE./:m]
]QuickBMS will run the extractor script and tada, all the archived car data files have been unpacked and placed in the folder./:m]
]You should now have a whole list of files ready to go, including the aforementioned power.lut.


All of these files are readable as a .txt, meaning the best program to read them would be NotePad++ (NotePad will work fine, but nothing will be parsed and it’ll be much more difficult to read and edit reliably.)/:m]
]Edit as many of the files as you see fit, but note, many of these files refer to various other paths, so if you rename anything, you will need to ensure that your paths for all dependent files are also correct, or the car will not load in-game./:m]
]Once you are done, run steps 3-6 again, except this time use the rebuilder script. A new folder with the rebuilt .acd file will appear, and you should replace the original with this./:m][/ol]
The creator of these scripts does state that the game can run directly off the extracted files. EDIT: This is true, all you need to do is delete the data.acd file, meaning if you wanted, you could skip rebuilding it. That, I assume, is mainly for repacking everything if you want to share.

At any rate, Assetto Corsa is much better at handing ridiculous power outputs than Beam.NG, so after tweaking the power (moar powa), boost (MOAR BOOSCHT, with later spool), engine thresholds (higher redline, engine able to tolerate higher revs and boost), traction control (because the boost caused my TC to have a fit), tyres, instrument displays (because I upped the redline), drivetrain (because GT3 cars are RWD and limited to 6 forward gears), the body (heavier) and the aero (more drag due to higher cooling requirements, more downforce), I was able to test what a 1439hp, 1433kg front-engined AWD hypercar (the equivalent of a new model I’m building in Automation) really felt like. Clearly it’s naughty to modify these files without permission or giving credit, hence I’ve got the original backed up and I will definitely be keeping it personal use only.

Awesome! I’m gonna have to try this out soon.

Hey all, sorry to bring this thread up, i’ll be trying this asap and i’m wondering if its possible to get clean audio samples from the engines? since i’m exporting the curves i might aswell mod the sound, right ?
I did recorded a test run with audacity but it has some slight reverb wich i guess is added in post…
Well, i cant seem to find the engine files anywere… where did they went ?