[GUIDE] How to make lights work in BeamNG (writing in progress)

After toying around a bit I’ve kinda figured out how to fix most common issues with lights in Automation exported cars. So I thought I might write a guide with what I discovered. Disclaimer: I’m nowhere near an expert in Beam.NG modding. I just grabbed a car whose headlights I wanted to fix, a text editor, and kinda trial-and-errored my way until it worked.

How to make lights work in BeamNG

The idea for this guide was to give an example car with some lights, that I think has at least one example of each kind, so I can fix them in this guide and you can follow along, having the same node names and everything being on the same line of the .jbeam file.

So gentlemen and gentlewomen, if you look under your desks you’ll find this beam mod file:

Right as it came out of the Automation exporter. To have this magnficent car in BeamNG, you have to place it (as is, without decompressing) in yout Beam mods folder. Default is Documents/BeamNG.drive/mods.

What we are going to do:

If you haven’t looked already, you’ll find a damn ugly car in beam (or if you load the .car file in Automation). It’s that way on purpose though, I made it so it has one of each kind of light I can think of to illustrate every scenario, and to have them be spaced out to make identifying which is which easier.

The plan is to make the lights behave like this:

However, if you open the car as it is now in Beam you’ll notice several common issues:

So, lights in Beam.NG cars have basically two parts:

This part (line 49 on our .jbeam), allows the lights themselves to look lit when they are on, but it doesn’t actually cast light on the world or any objects. It merely changes its texture. This is most visible (and important) on position lights and turn signals for example.

Lines 64 to 132 (after the Glowmap stuff), we have a list of the spotlights. Spotlights are a subtype of prop, but they’re the only props automation exported cars have. Spotlights are the actual light casting part, they produce a cone of light and a flare where they are.

The first part here has some general properties that will apply to every single light on the car:

After this part, we have a huge list of all the spotlights on the body. They don’t exist by themselves though, they are attached to a node. Think of nodes as dots in a 3d canvas that is the car. If we take lines 76 and 77 as an example:

Now, make a copy of “beamng_light_demonstration_hideous.jbeam”, put it somewhere easily accessible (don’t leave it in the .zip for now), and open it in a text editor. Making a backup is not a bad idea. Also, open up BeamNG alongisde it, and set it in windowed mode to work alongside (if your screen size allows). Load up a (preferably simple) map that has day and night available, and spawn the car. 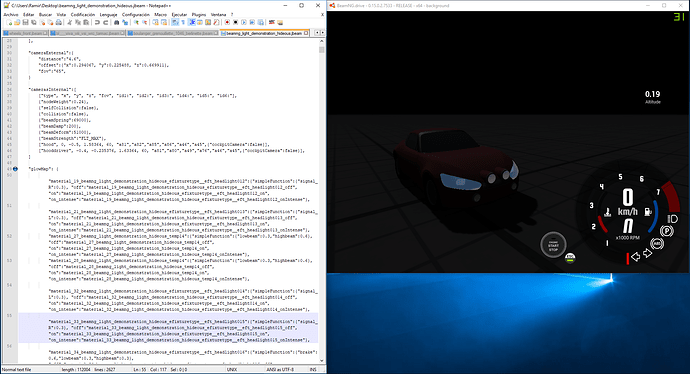 Now, enable debug mode. For that first you’ll need to make sure “advnaced functions” are enabled in the user interface menu: 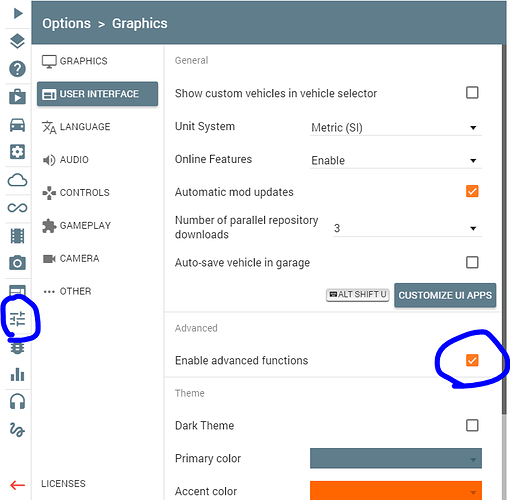 Then open debug mode in this menu and change these two settings to see the nodes and their names: 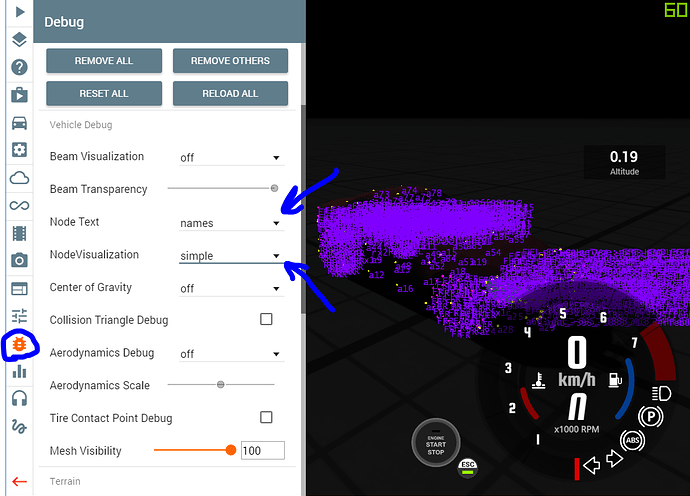 As you can see on the right, a lot of dots showed up, along with their name tags, making a huge blue unreadable mess. And this car is pretty tame compared to others. So to have any chance at telling where the nodes we’re looking for are, we’ll have to use the free camera to look around. If that doesn’t work, it’s sadly down to trial and error. Free camera mode is accessed by default by pressing shift+C. WASD and Next/Previous page to move.

Now, with the help of the free camera and the different light controls, we can find the problematic ones, and then search for them in the file. And if that doesn’t suffice, we can look around in the files, see what function they have attached, and if that doesn’t work either, it’s trial and error sadly.

Getting rid of wrong glowmaps