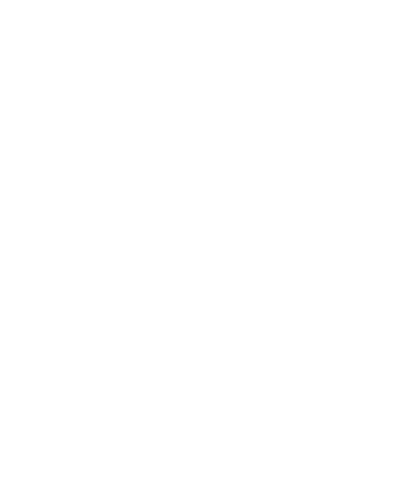 Akinari Kitahara was a former engineer for Kawanishi, having played a role in the engineering of the H8K “Emily” aircraft. After the war defeat, he soon ended up leaving the corporation and took a place at Komatsu, as an engineer for their early engines. As the years passed on, he gained a large amount of knowledge on engines, both petrol and diesel types. As the years passed on, he felt confident he could engineer a design of his own. By 1952, he left Komatsu company and decided to move, and bought a former factory by Shibukawa, Gunma, near Mount Haruna. By now he was married, and his wife had recently given birth to a girl, who was named Haruna. Meanwhile, he began drafting up plans to use the former factory.

One plan came to mind:

Akinari went and sold his car, and his old residence to purchase manufacturing equipment for engines. His experience at building diesel engines meant he knew exactly what equipment was needed to produce a high-quality engine. He called up his former co-workers from the engine plant, for a hand in engineering the first engine.

By 1956, the company was inaugurated as “Haruna Heavy Industries Co., Ltd.”, named after now both the nearby mountain and his daughter. A logo was drawn, based on Gunma Prefecture related symbols, and the first diesel engines began production soon after, the original Haruna DS86A, a 4-stroke inline 6 8599cc diesel engine with an OHV pushrod-based valvetrain and pre-chamber injection developed in-house. These engines had a great success with the railway companies, particularly JNR, where the 4-stroke design allowed for less pollution and better NVH characteristics. The engines were also used by construction machinery manufacturers, and were known for great durability and reliability, but were still relatively loud compared to some other 4-stroke diesels.

By 1957, hundreds of these engines were sold, and the company broke even, and began to produce a profit. The Boeing 707 took its first flight, heralding a new era of technology. By now, turbocharging was beginning to appear in the most advanced engines. Kitahara, having worked on aircraft before suggested a turbocharger to apply to the DS86A, rather than designing a new engine. This saved on engine development costs, however early turbo technology was very expensive to produce. The DS86A was a solid base however, and a small turbocharged engine can be more efficient theoretically, so they began the development of the DT86B, a revised engine incorporating lower friction components, and a turbocharger courtesy of IHI. The new engine required much more maintenance, but it had excellent power-to-weight and was very efficient. These engines weren’t as popular in construction equipment compared to the more rugged DS86A, but the DT86B found itself being used for generators, newer diesel trains and more recently, a marine version was developed of both the DS86A and the DT86B, allowing for more sales in the marine diesel market. The first Haruna trains were designed, engineered and built in 1959, beginning the series of Haruna rail vehicles, using a chassis and body developed in-house, and the DT86B engine. This new railcar was known as the KiHa 86, a series of DMUs available in multiple formations of carriages, mostly 2-car formations. The KiHa 86 was bought by a few operators, to replace the old locomotive hauled sets. The KiHa 86 generated a profit, meaning Haruna continued development of the railway division.

By 1960, Haruna was generating steady profits. Mr. Kitahara looked at the sheet of paper he wrote many years ago, and remembered that they were to also build automobiles at some point.
As so, the first designs were drafted. In 1964, the design was frozen of the body, and the engineering was to involve a 1.5 litre OHV petrol engine, with technology derived from the DS86B, a newer revision of the DS86A, including forged components in areas. This new engine was known as the 1Z-P15, “Z” being the series, “1” being the decade it was developed since founding, “P” for pushrod valvetrain and “15” being the displacement. By 1965, the vehicle ○○○○○ was nearing the end of development. The tooling was readied, and the vehicle was released in 1966, coinciding with the 10th anniversary of Haruna Heavy Industries. The vehicle was particularly popular in the company car and fleet market, particularly taxis as Haruna was known for their diesels. However, to the average consumer, they were unknown, so most sales went to fleet markets. Their popularity among taxis helped advertise the vehicle, so soon after sales among consumers increased. This first model continued until 1976, a long lifespan as the 2nd type was developed. In the meantime, the first Isekai light pickup was developed and began production, with a new 1A-S18 inline 4 1.8 litre engine incorporating advanced single overhead camshaft technology, allowing for more response. This 1A-series engine was tuned for low-down power, providing a more effortless experience for the pickup market. The original Isekai was also the first model to export into other markets outside of Japan, and continued until 1979, where the next generation began production…

Along with these, a small kei car was produced, with a 360cc engine providing merely steady performance.

During this time, they also finalised an early Gen-II nuclear reactor, a high-power pressure channel type reactor (similar to the RBMK), with heavy focus on passive safety. These were built for some Haruna facilities, allowing zero-carbon energy for the factory, and also Japan as a whole.

By now, many vehicles were being exported. Factory automation began to come into force, as the ageing employees began to retire, some positions were never opened again as robots and machinery took their places. The release of the ○○○○○○○○○○, with the 1A-S18 engine filled a niche of mid-size sedan types. Haruna vehicles were gaining a large foothold in American and British markets in particular, as the inefficient and underpowered American competition were not very competitive technically with the smaller Haruna engines which utilised more advanced technologies. In fact, Akinari tried to sell his technology to a large American manufacturer who dismissed the technology, with the US company CEO having said:

quoted in 1976. This meeting ended up with Akinari leaving the area with a somewhat smug expression…

By the 80s, Haruna had a very good reputation. Multiple facilities were now worldwide, including the construction of an engine facility near Cardiff, Wales, the Haruna Cardiff Engine Plant (CEP) opening 1986, on their 30th anniversary, bringing many Welsh jobs, and a new Canadian engine and vehicle facility opened 1984, as well as 3 more plants in Japan, a plant in W. Germany for vehicles and engines, another Canadian facility for the heavy equipment and rail vehicle manufacture, and a similar facility in France.

By 1998, the ageing CEO Akinari, who was about to cede his position to his grandson Sakao, wished to bring the company back to glory.

Under Sakao costs were cut. The new lineup of 1998 was a success, but the cars weren’t as well received, the cheaper interiors no longer feeling as premium as before. Still, sales rose notably, despite the fact that the 2001 ○○○○○ finished second-to last in a Motor Friend comparison test against the new Carson Argon, Nieizo Senira and Hoshino Luna, and the ○○○○○○○○○○ losing to the Hoshino Avancera. Sales continued strongly until the economic recession of 2008, then slowly rose again.

By 2010, the Hoshino Auto Corporation was losing shareholders after a scandal, where the president of the Hoshino Auto keiretsu came out as transgender which led to controversies among highly conservative shareholders, entered talks to form a strategic partnership with Haruna Motor Corp, with Haruna replacing their sedans and hatchbacks with rebranded Mimuras, while Haruna focused on trucks, SUVs and kei cars to replace ageing Mimura vehicles. As a result, Haruna Motor Corp. purchased a 25.3% stake in the Hoshino Auto Corp.
The new Hoshino-engineered vehicles were well-received for its well-sorted chassis and high quality, fulfilling the late Akinari’s wish for ever-better quality… 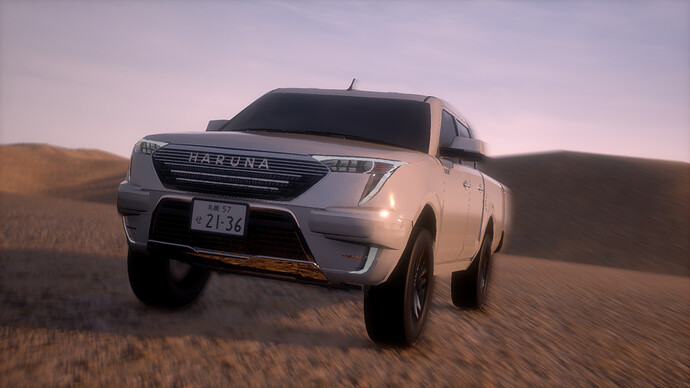 In 2020, Haruna Heavy Industries revealed the new Isekai during the Tokyo Motor Show, replacing the ageing model in production since 2009. 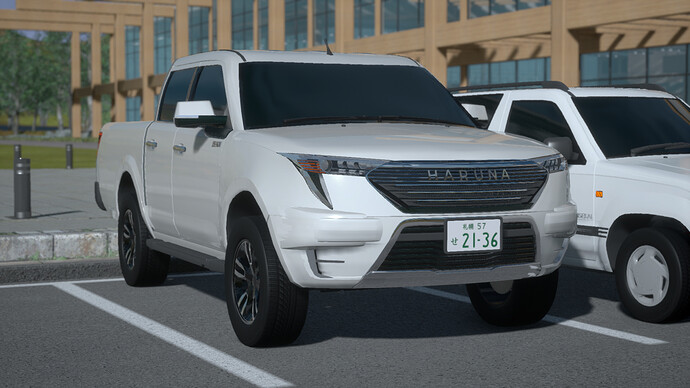 image1920×1080 573 KB
The 2020 Isekai gained a new lineup of engines, and even was designed from the outset to gain an electric version, though whether an electric Isekai will be built is unconfirmed.
The line of engines includes:

The Japanese market mainly gets the 2.5, 3.3 and 3.3T petrols, and both diesels.
The 3.9 engine is mostly marketed to USDM and developing countries. 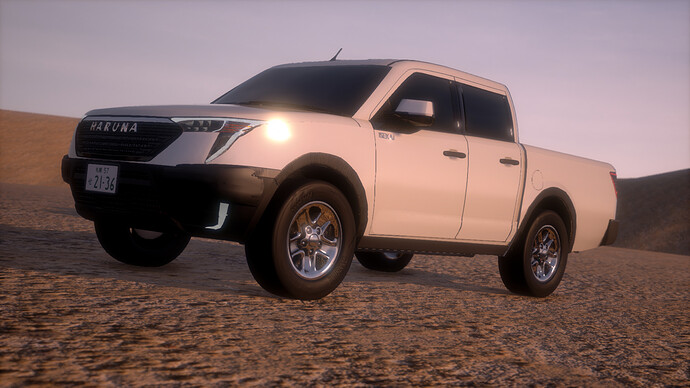 image1920×1080 604 KB
Specification varies between markets, but the Japanese model comes in most notably:

Continuing to uphold the Haruna reputation for durability and quality, the new Isekai certainly does not disappoint, with all the engines being tested in the most extreme conditions, and even stop-start traffic.