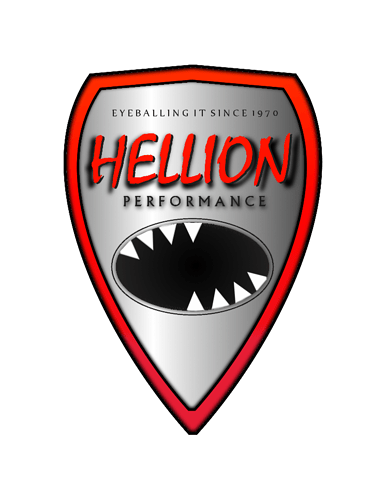 badge750×967 287 KB
Founded in 1970 by Terry Evans in California, Hellion Performance vehicles focus on rear wheel drive purist performance. Nothing is allowed to get in the way of driving feel.

Thread abandoned. I’m going to make whatever cars I want at whatever time and mostly for challenges. I probably won’t make a thread for them. 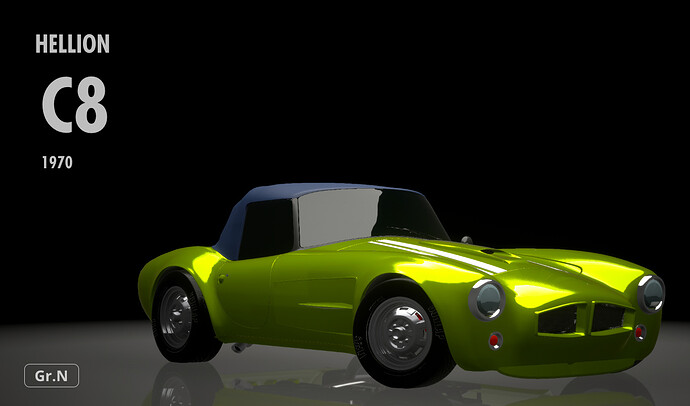 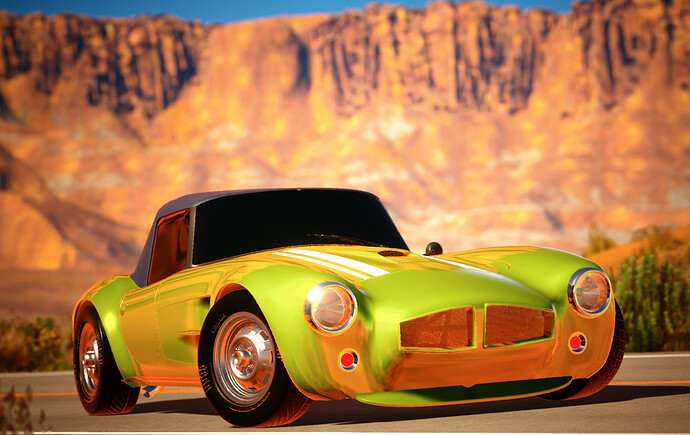 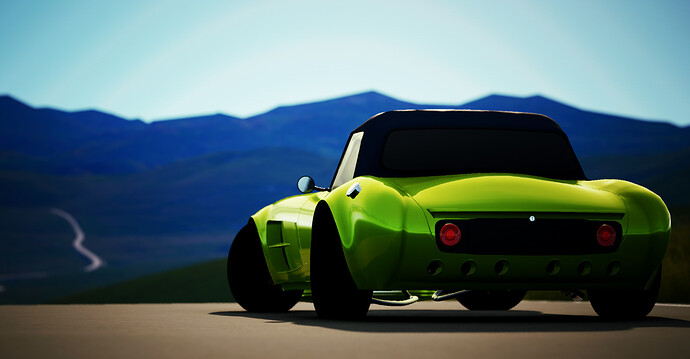 Designed to look like a 60s roadster, the original C8 (chassis code C80) was built to provide the best dollar per fun ratio in the game. With a generic outsourced 4.5 liter V8 pushing 257 hp to the rear wheels, a spaceframe chassis, fibreglass body, and no power steering or radio, it was a spartan experience. Despite this, it sold reasonably well, thanks to its cheap MSRP due to the lack of expensive creature comforts. Don’t ask the Hellion rep about its safety systems, though. 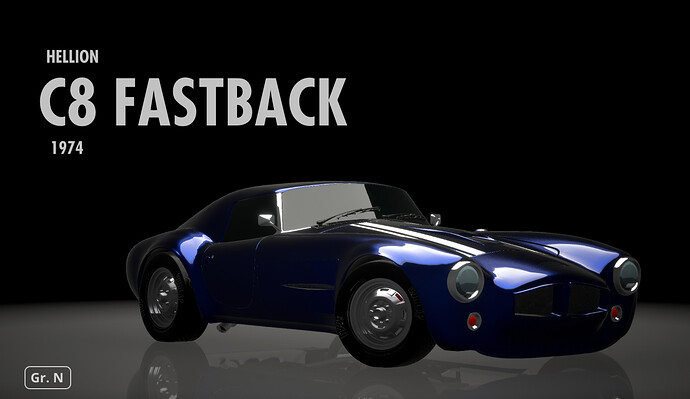 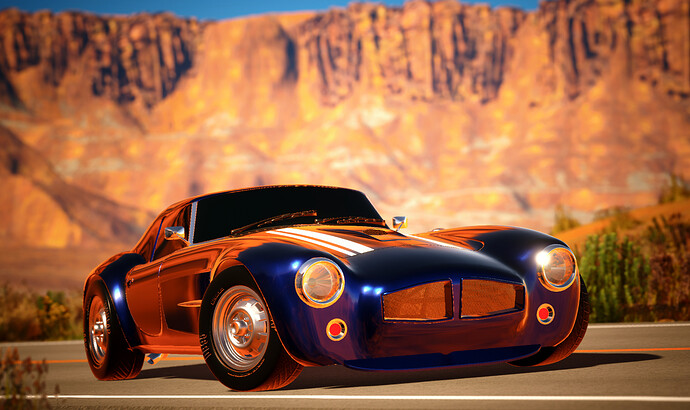 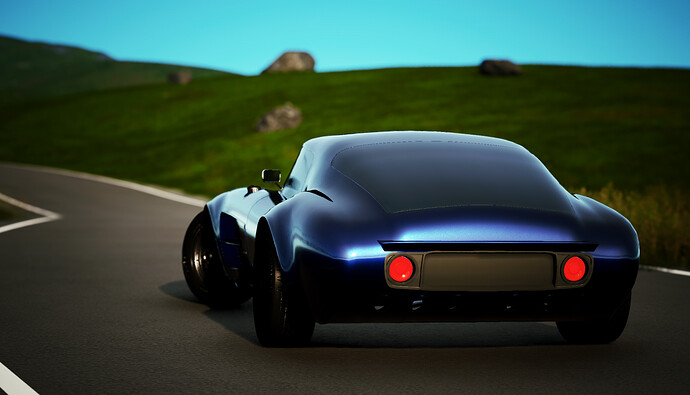 In 1974 the C8 was refreshed with an elegant fastback roof and dual wipers and mirrors. It also got a twin carburetor, retuned suspension, and an actual radio for once. The refresh accelerated sales by a considerable margin, as the C8 became less unfriendly and more sexy. Despite this, the C8 still suffered from deep-rooted issues like its lack of power steering–while normal for the average Hellion customer, it seemed unreasonable to the common folk–and its relative unsafety. 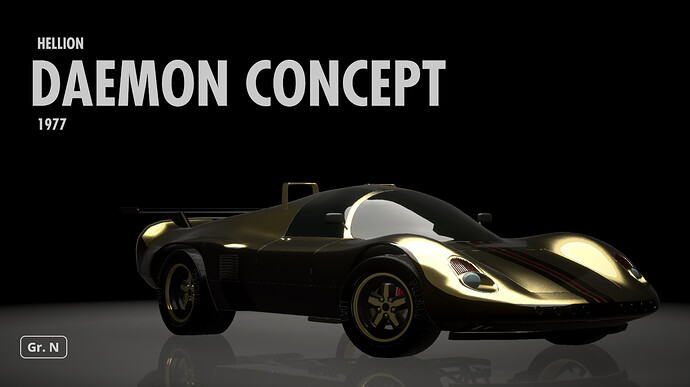 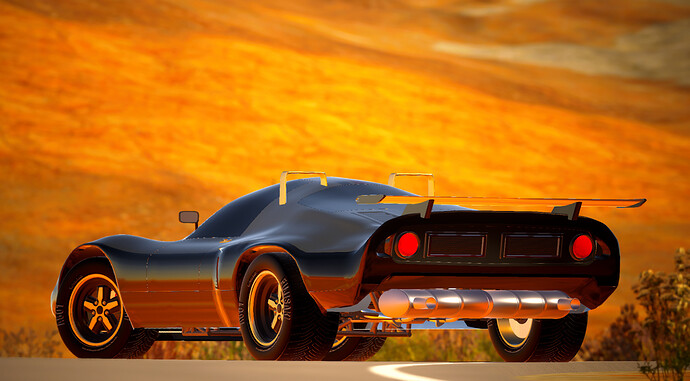 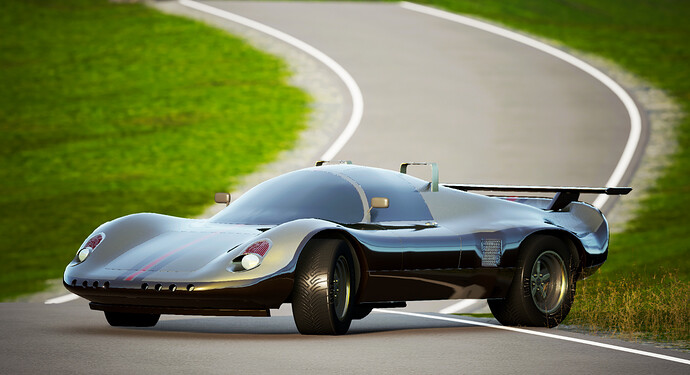 With interest towards a mid-engined platform growing, Hellion engineers did a first pass on a vehicle that could out-Hellion the original C8. Unfortunately Hellion’s later decision to switch to simpler, boxy styling conflicted with the Daemon’s curves, and it was ultimately scrapped in favour of a new C8. Only 2 (identical) running prototypes were built and featured experimental aerodynamic fixtures.

Why not give it a second life as a car for a live-action Speed Racer flick, or a prop in The Cannonball Run? It would be a perfect fit for either of them! 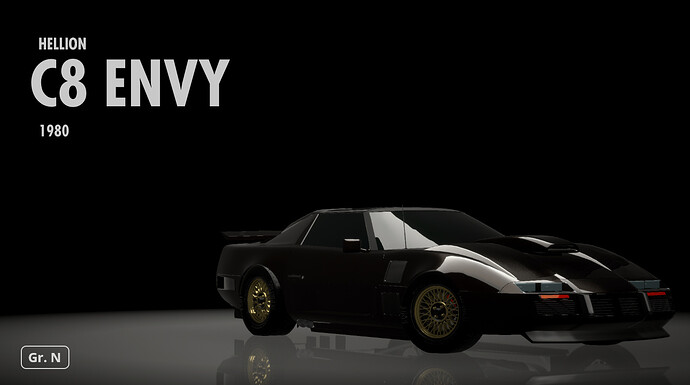 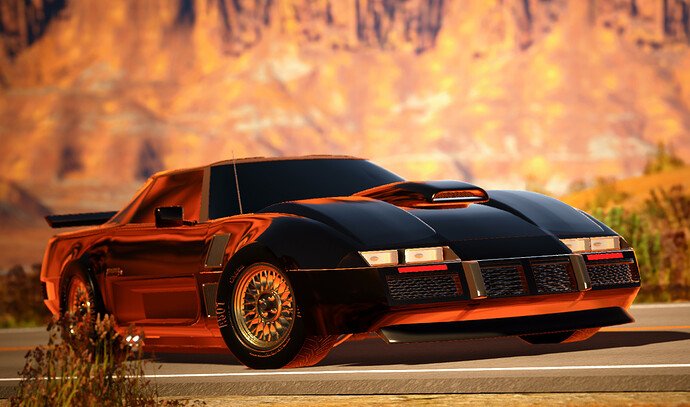 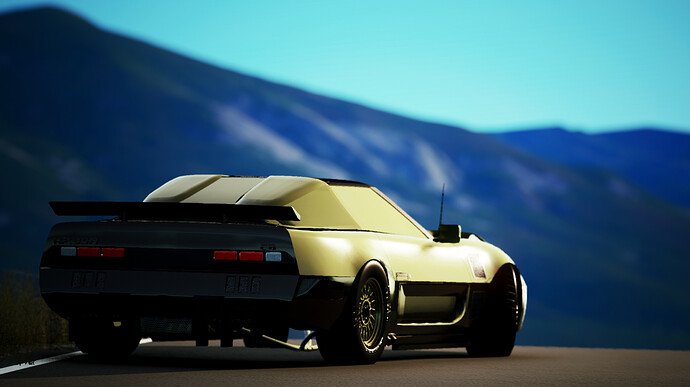 As Hellion became more and more profitable, they amassed enough resources to start making a car with a monocoque chassis. From that came the Envy, a balls-to-the-walls looking sports coupe with simple lines and avant-garde aero. It boasted a high-end gas suspension, semi slick tyres, and a t-top. Those tyres weren’t there for show, either–Hellion engineers guraranteed that later in its life, the Envy would see an insane increase in power, and those meaty semi-slicks were future-proofing.

The back of the C8 is really boring, but everywhere else looks really good. 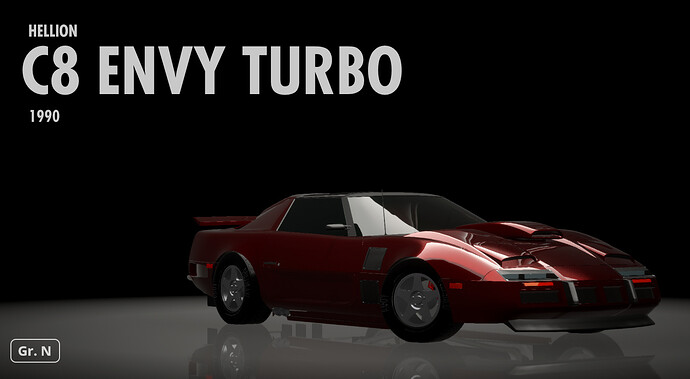 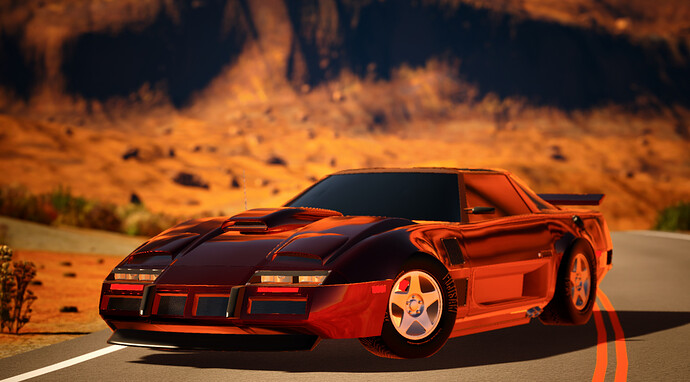 This C81 variant boasted a fuel injection system and twin-turbochargers boosting power to 390 hp and torque to 364 lb-ft in that same single overhead cam (24 valve), all cast, not even 5 liter V8. It also sported cosmetic enhancements like extra scoops, eyelids, reflectors, mirrors, and new taillights taken from some generic parts bin. All the expensive turbocharging, as well as the better brakes and aero required some cost-cutting, so the Mk2 had unique, “forged” steel wheels to cut costs. 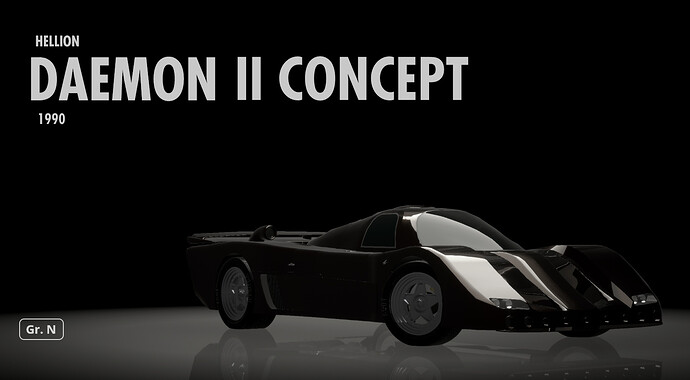 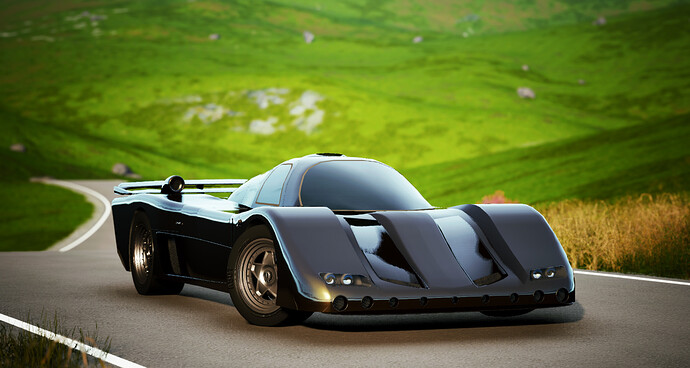 With 60s curviness out of the question, a boxier Daemon was conceptualized, and one running model was produced with an in-house, one-off twin-turbo V6 engine. Its styling was sparse, to say the least. No special livery, auxiliary taillights, small headlights, and minimal aerodynamics. It was shortly scrapped due to it being made irrelevant by the C8. Despite it being faster, it made significantly less power and was heavier. To be competitive with the C8 it required the removal of creature comforts that would make it unsellable. The one and only Daemon II is held in the California headquarters of Hellion Performance.

The body is more of an 80’s one, but it’s elegance and the stye made it’s design timeless. 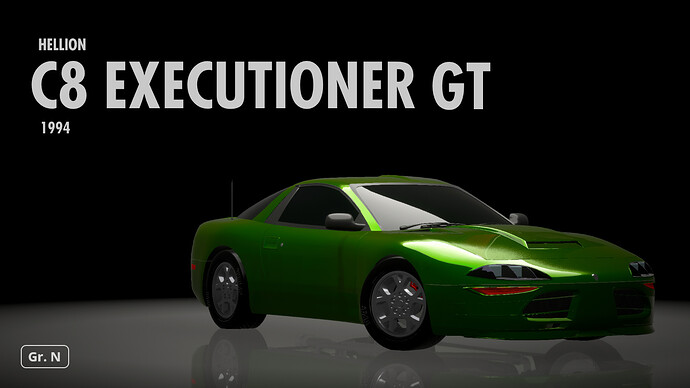 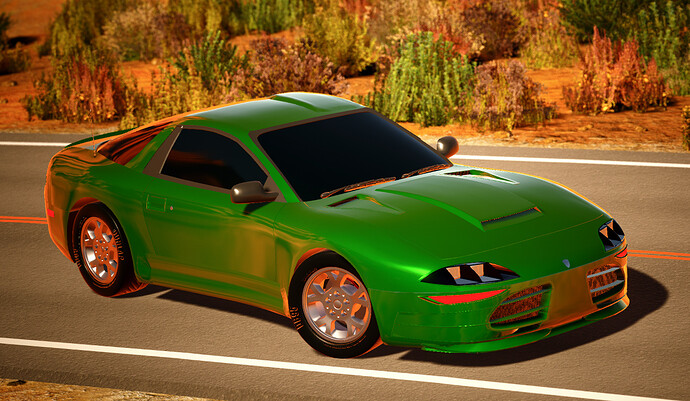 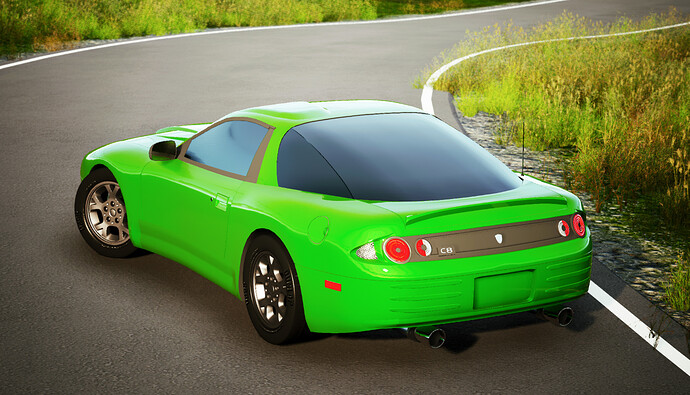 The first ever Hellion to wear a proper trim name (although not in badging), the C8 Executioner GT, was a revelation. With a massive 6 liter twin-turbocharged aluminum V8 built in house under the hood packing 509 horses and 531 lb-ft, this puppy went like no other Hellion. Its monstrous wheelspin–apt, considering its name–lengthened its 0-60 time, but the Executioner absolutely flew to a 181 mph top speed. It also packed lots of creature comforts, like a CD player, variable power steering, and air suspension. At the time it was seen as a large departure from the typical Hellion formula, but it sold well enough to keep them in the green.

The nose reminds me of a pre-facelift fourth-gen Camaro, but the bright green is strangely fitting for the Executioner because it has all the aggression of the Incredible Hulk. I can’t help thinking that it may actually be a better car with a normally aspirated V8 - the resulting loss of wheelspin might even make it quicker to 60 mph - and a more economical one as well. As it is, though, it would have been one of the most unhinged cars of the 90s, or indeed any era for that matter - and I have to applaud that fact. Anyone who saw one of these in their rear-view mirrors would have had no choice but to move over immediately! 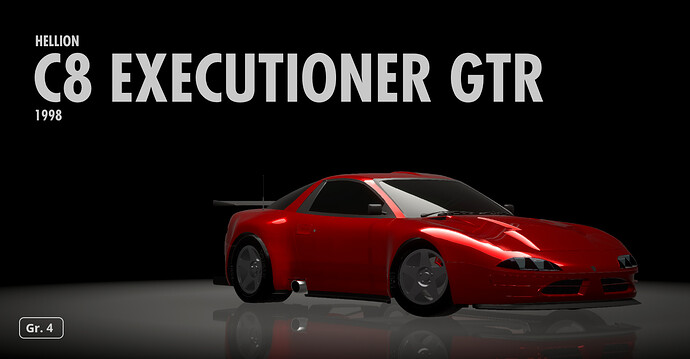 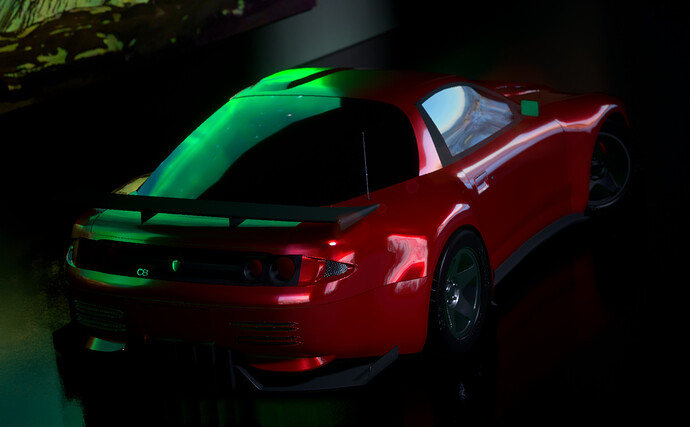 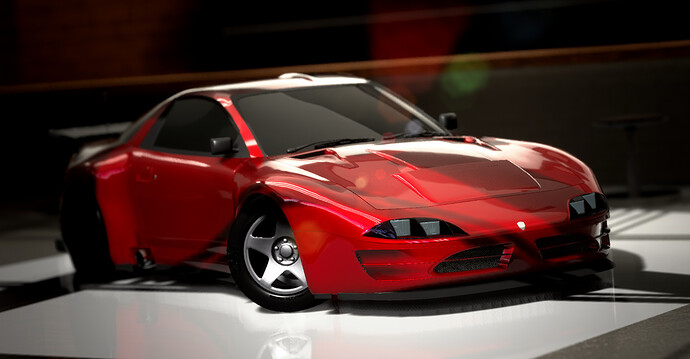 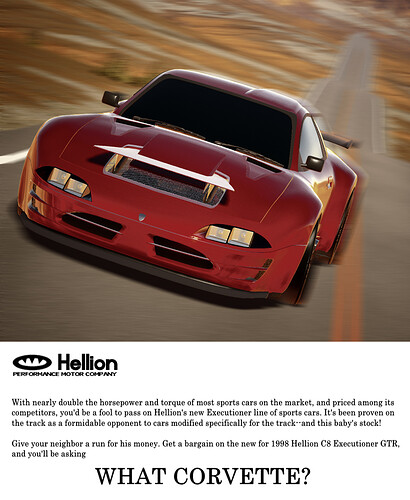 With a fitting 666 hp under the hood, this near-uncontrollable, rare variant of the Executioner generation C8 was unrelentingly fast. 0-60 came in 4.5 seconds and the GTR’s top speed was limited to 186 mph by its immense 1309 lbs of downforce. That giant V8 needed ample cooling, so the hood was fitted with an adjustable hood scoop that could be activated to trade extra air resistance for cooling. With a roll cage and fire suppression system from the factory, it was built for the track, and did well in GT2 racing thanks to its high cornering grip. It was a common purchase for hobbyists looking to annihilate anything else at the trackday, and went down in the history books as one of the most insane Hellions ever built.

More power than a McLaren F1, and more torque than a Virage Vantage V600. Well done. In fact, the Executioner GTR might just be your best car to date. 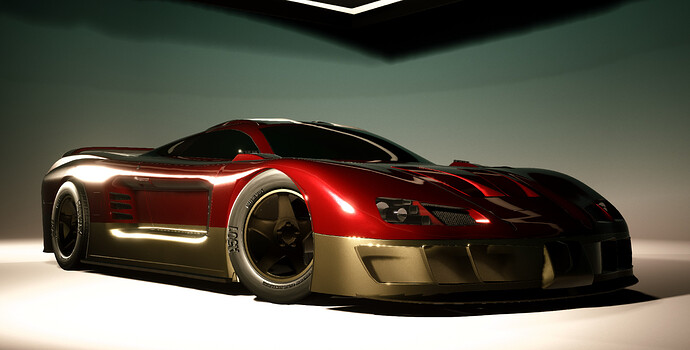 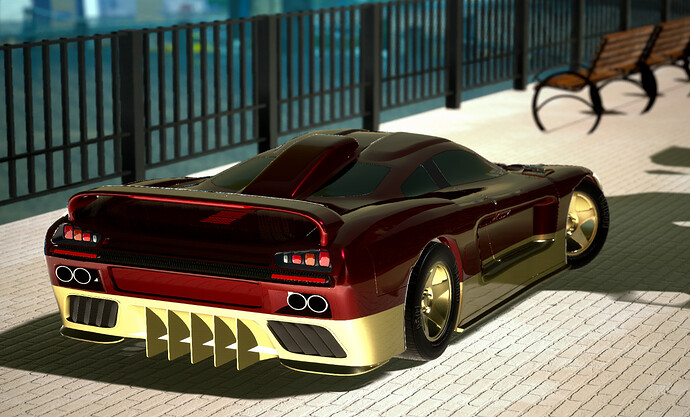 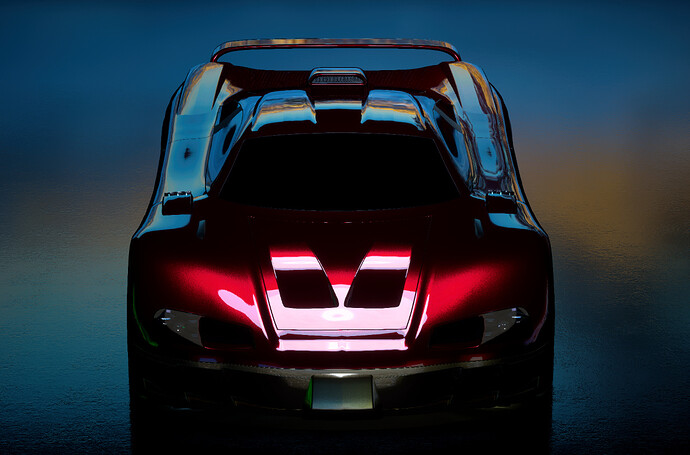 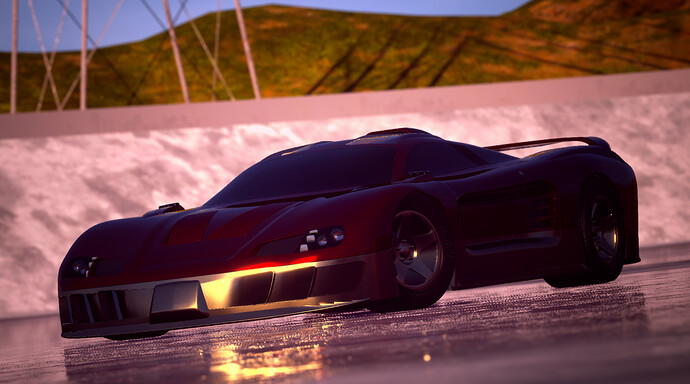 Although it had a short production run of only two years, the M80 was the realization of Hellion’s mid-engined dreams. With the monstrous, thirsty 6 liter twin-turbo V8 from the Executioner GTR, one of the earliest production 6-speed sequential transmissions, and an upgraded interior from the Executioner GTR, it took on fighters like the CLK GTR and Diablo. Unique integrated mirrors flank the high-end cockpit, which actually has a CD player, contrary to most Hellions. The new Daemon’s transmission let it fly to 60 in less than 4 seconds and it could even crack 200 MPH going downhill. Like its sister car, the Executioner GTR, the Daemon GTX was a popular track car, as despite its plush interior the Daemon’s suspension was set up chiefly for taking corners at speed. Some critics lambasted Hellion for going in this direction, saying it didn’t capture the spirit of the old C8, but that’s just because it wasn’t a C8. It was a new, forward thinking addition to the Hellion fleet that pushed the boundaries of performance. Well, bar the steel chassis and fibreglass body panels.

I’m going to make cars exclusively for challenges now and make up brands as I go because I just don’t like having to make cars for specific brands for an extended period of time.