Help Me Improve This Car

In his review of my car for CSR26, @abg7 made a number of criticisms that I’m keen to deal with:

The Car Shopping Round (Round 64): Tears in Heaven

Unlike the three cars I had driven so far today, the Scarlet X is much smaller, and, at 1.445 metric tons, is also quite light, thanks to all-aluminum construction. Every aspect of the exterior design, from the overall shape to the placement of the fittings, is top-notch, even in the test car’s subdued silver color. And, like the Lime, it was purely rear-wheel drive. I was anxious to find out what lay beneath the hood of this vehicle.

I popped the hood and found a normally aspirated, 32-valve crossplane V8 engine, but this was no ordinary V8; it was very oversquare, with a displacement of just 3.8 liters. Yet, the cam timing was so aggressive that it cranked out 507 bhp at 9100 rpm – an amazing achievement for such a small engine. The RPM limit of 9700 rpm was also extraordinarily high for an engine of this type. On top of that, the engine was immensely reliable, although it required 98 RON super unleaded, whereas everything I’d previously drove only needed 95 RON premium unleaded.

The Scarlet continues the trend of using a dual-clutch gearbox, although this one has six speeds instead of the usual seven. The lack of a seventh gear, combined with the narrow tires (225mm up front and 255mm at the rear) and short wheelbase all contribute to significant, though manageable wheelspin; quite frankly, this car would have performed better with a seven-speed tranny. I can’t find much wrong to say about the braking system, though, which develops no fade at all even after heavy use due to the large front rotors (350mm wide, to be exact). After all this, I was expecting the car not to be a letdown, but I would soon be proved wrong.

Stepping into the sporty interior of the Scarlet, I realized that its infotainment system was just a standard setup plucked from a family car – lighter than more expensive systems for sure, but not comprehensive or advanced enough for my needs. Ignoring that drawback for a moment, I took it out onto the road and was horrified to hear the suspension bottom out even on the smoothest surfaces, despite the active setup. The narrow front tires didn’t help either, as the car had a clear tendency to understeer. I was clearly shaken after the drive to the test track, where I set a lap time of 2:09 exactly, but I reluctantly concluded that, even without bottoming-out issues, and despite a low purchase price of $107800, this car feels too much like a lightweight sports coupe or track car instead of a bona fide supercar for me to purchase it.

The car in question was the Erin Scarlet, which is supposed to be my company’s best car, however after reading this, I don’t think it’s as good as it could be.

So, I need some other opinions and tips on what to do.

The Scarlet is meant to be the ultimate driver’s car. It is supposed to be as good on a track as it is on the road, and should be absolutely brilliant to drive. While it’s not an out-and-out track machine, it should be sporty and competitive. But at the same time, it needs to retain ease of use and drivability.

How then would you improve it to fit this bill, and how would you deal with the points made in the review above?

Please note: the trim entered for the competition was the ‘X 3.8’ trim.

Well I can’t download it right now, but what were you exactly trying to make? A full on sports car (or muscle however you look at it) like a Corvette C7, or a GT like the Aston Martin DB11? @Razyx gave me some tips on building a GT car a while ago and you know how good he is a building cars ;).

The lack of a seventh gear, combined with the narrow tires (225mm up front and 255mm at the rear) and short wheelbase all contribute to significant, though manageable wheelspin

Put a 7 speed gearbox in, widen the ratio’s slightly, BAM!!! You might reduce wheelspin a bit! Maybe you could widen the rear tyres a bit but the tyre width is kinda wide for RL cars…

I realized that its infotainment system was just a standard setup plucked from a family car – lighter than more expensive systems for sure, but not comprehensive or advanced enough for my needs.

He’s never drive a car before so he doesn’t yet realise that when you want to go fast, a fiddly stereo just gets in the way! Standard stereos do exactly what’s needed; higher level stuff adds more speakers/woofers and allows for more fine-tuning, that’s it.

I took it out onto the road and was horrified to hear the suspension bottom out even on the smoothest surfaces, despite the active setup

Raise the car or stiffen the springs until there is no bottoming out. This is an easy fix and the original problem could have been caused by a export glitch!

as the car had a clear tendency to understeer

Understeer keeps the driver alive! As per my prior comment, this reveals abg7’s lack of driving knowledge. Push too hard you get understeer, drive on the street you WANT understeer! A car that oversteers all the time is a death-trap!

this car feels too much like a lightweight sports coupe or track car instead of a bona fide supercar for me to purchase it.

This is purely subjective but has a basis in truth. A Ferrari 488 Italia isn’t a supercar; it’s a top shelf sports car. It’s insanely fast but it lacks the nebulous last degree of exclusivity that defines a super or hypercar from their lesser brethren. Think Gallardo vs. Murcielago…

IMO, your car is fine apart from perhaps some suspension fine-tuning and I wouldn’t worry so much!

PM sent. I didn’t go into too much detail about it, didn’t really finetune the thing, I also did not touch the quality sliders (except lowering quality on some).

All in all, I’d say you’re starting with the wrong body if you’re looking for supercar experience, but as a GT this should do.

I did some changes to it and now it’s a bit better. I think i shaved off 4 seconds on the test track time

It’s a nice car, but i changed some sliders around, mostly lowered some, but upped the slider for the tires, made the front tires wider, and tuned the suspension and the aero. And i did a small checkup on the engine too, and found some more horses under the hood, and a smoother torque-curve.

Interested in an extra 10 points of sportiness for free? 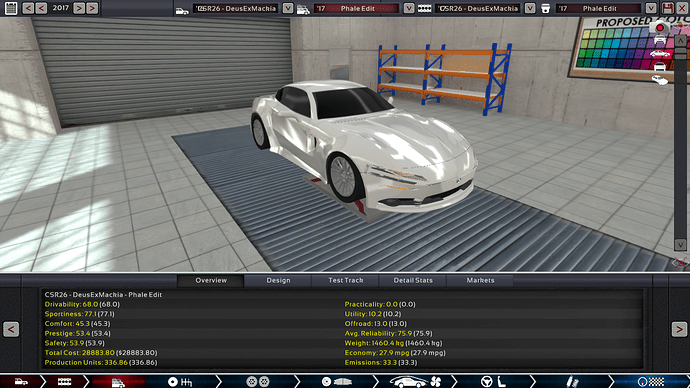 Key changes:
Slightly lowered compression, increased ignition timing
Lowered cam profile for better economy & drivability
Muffler bypass with dual reverse flow, so you can be loud when you want it and quiet when you need it

Wow guys! Thank you for the response. Won’t be able to look at the improved cars you’ve sent me until later but I’ll certainly be looking at all of them

Probably ought to have made it clearer that this actually isn’t meant to be a supercar, I just entered into a supercar competition

@Speedemon Defitnetley more sports car. Think Jaguar F-Type but larger and more powerful. And I’ll ask Razyx if I ever need help with a GT car

@HighOctaneLove Thanks for the feedback, I think I need to look at some real-world ride heights for sports cars. I’ve always built them thinking that they need to be that low in game in order to be realistic.

@squidhead Excellent, thank you very much! Might have to add a few more trim levels to account for not having the active suspension/different gearboxes etc.

@gridghost Thank-yee, never been sure about putting too much quality on tires as it usually ends up costing more to service. But I guess that’s something to be expected on this sort of car

@phale Very nice, thanks! Question (anyone can answer this), do any of you judge how hard a car to drive is based on the ratio of Drivability to Sportiness, or is that just me? When I was building the car, I did end up with a few setups where I had a higher sportiness than drivability and felt that that would make it harder to drive, so I went against it.

If I remember right, your car has an absurdly high amount of PU and Material Cost.

I have no idea what the challenge is but I’ve made the car go in 7:03 so if speed is an issue it’s not too hard to fix.

Okay so. I didn’t expect to do much but then I pretty much reengineered the whole car.

I halved the cost to make the thing by reducing the quality tab. Minimum reliability loss and goes round Automation track very nearly as quickly. While also putting on a couple of turbochargers.

Look at it for yourself. I don’t want to explain much.

No, drivability is drivability and sportiness is sportiness. They are both graded on completely arbitrary scales, so their relative ratio is also totally arbitrary. Before the last update the ratio would have been different.

@phale I’ll treat those as such from now on then, makes a bit more sense!

Think I’ve settled on an improvement. I’ve sacrificed on lap times a bit, it’ll now only do a 2:07.70 round the ATT, but this version doesn’t need to be a track beast. Rather, I’ll release a super lightweight version similar to @squidhead’s KHT tuned version in the future, and in the mean time this can be the more laid back everyday sports car.

All in all, I think the change has worked, plus it’s almost £10k cheaper now with the same profit percentage.

Relatively speaking, i’m an amateur, but if there’s one thing I can say… avoid all active suspension components like the plague. It just adds cost and weight for little to no return. Do correct me if I’m wrong.

NOPE WE NEED ALL ZE SECONDS

It helps with stats.

Best combo is IMHO standard, semi active, active for sporty cars. Active sport is really not worth it.

Active is pushing the limits - so as all such things it is not very profitable, but in some cases there is no better choice

Although I use it in most cases (Zavir) because of the lore. But in Hypera it really added speed. Or, maybe I could achieve the same same with a different tuning and less active components, but in Niddhogg there is really not much space left for suspension tuning.

All in all, I think the change has worked, plus it’s almost £10k cheaper now with the same profit percentage.

And you reveal the silver lining to the cloud of abg7’s controversy; you learnt how to tune cars better!!!

Plus savvy readers of this thread can learn some important points as well (although not from my post as much; I was very mad at abg7’s poor reviewing style…).

Exactly! It’s a bit of knowledge and advice for everyone if they so wish.

My only suggestion if you didn’t already is to stroke the engine out until just before it affects reliability, then shrink the bore down if you still want a 3.8 liter, it makes for a lighter engine overall though it might raise the peak power’s rpm a bit.

Thanks for the tip, I may have a play around with that, though I do like the very high redline (which surely would be impact by reducing how over-square it is?)

I played around a bit last night. With the quality in your bottom end you can stroke it to 74 mm(I think) safely, combined with a larger single exhaust pipe and dual baffled mufflers you can shave 8-10 kilos, free up some octane( from the smaller bore), and save money.