The history behind Hillstrom has its origins in 1882, when Joseph Hillstrom started making farming equipment in Stillwater, Minnesota. Not without success, so gradually the company was expanding towards making all various kinds of machinery. In 1939 they did their first attempt at entering the passenger vehicle market with their Hillstrom type A. What Hillstrom saw was an empty space in the market for people wanting something more refined than for example the little crude Willys Americar, yet wasn’t overly enthusiastic about the “standard” sized cars like Fords and Chevrolets growing for every year.

The 40s meant of course the war, that interrupted civilian production between 1942 and 1946. But after the end of the war, Hillstroms might not have been great sellers, but they had their place in the market in the late 40s and early 50s. However, Hillstrom was becoming more and more something of a player in the margins in the late 50s, when there was a horsepower war, cars were growing all the time and sparkling of chrome and pastel colours.

The 60s meant something of a revival for Hillstrom. The Volkswagen had shown that being a bit quirky wasn’t necessarily bad, there was a growing market for compacts, and people were starting to appreciate a more sporty, european-influed style, which Hillstrom somewhat tried to incorporate in their designs. So it was with great hope Hillstrom entered the 70s, however it was full of backlashes, as it was for the whole car industry in America. In the 80s it became more and more clear that Hillstrom didn’t have much of a future in the passenger car market. There was tons of new regulations on the horizon, there was the success of the asian manufacturers, and there was the aging Hillstrom lineup that had been facelifted a couple too many times. Hillstrom was searching for a partner in the automotive market, without further success. Having problems to adapt their ageing designs to the new passive restraint regulations in 1990, meant that Hillstrom decided to axe their whole passenger car lineup. The “1990” models actually were all produced under 1989, and was internally called “1989½” models.

However, Hillstrom decided to soldier on in the market for commercial vehicles, where they still remain a slow but steady seller, managing to satisfy the customers looking for a real workhorse rather than something that’s looking cool or has a plush interior. 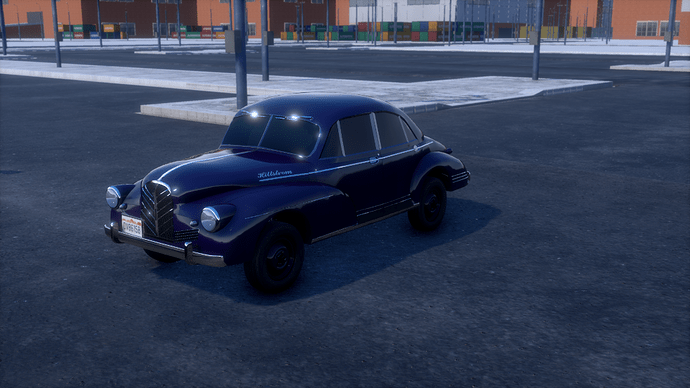 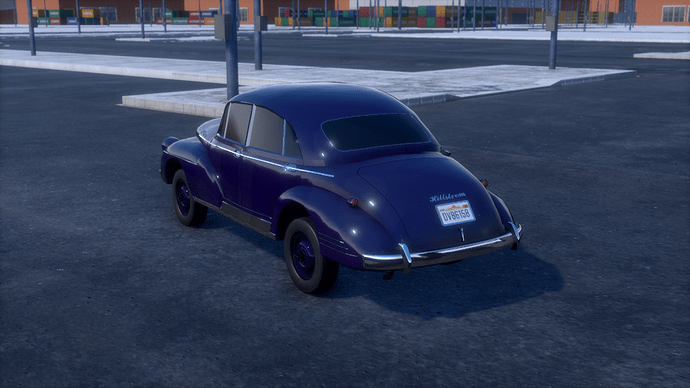 The first Hillstrom was the 1939 Hillstrom Type A. Not exactly a car full of groundbreaking technology, it at least had an overhead valve six, while many competitors still were running flatheads. What was already becoming ancient, though, was the leaf sprung solid front axle, with more and more competitors switching over to IFS. The Type A was only sold in one version, a 4 door sedan with a quite high level of standard equipment for a car of its size and age, like corduroy upholstery, clock, heater, cigar lighter, dual wipers and woodgrain on the steering wheel and dashboard. A radio and outside mirrors, however, was still options you had to pay extra for. 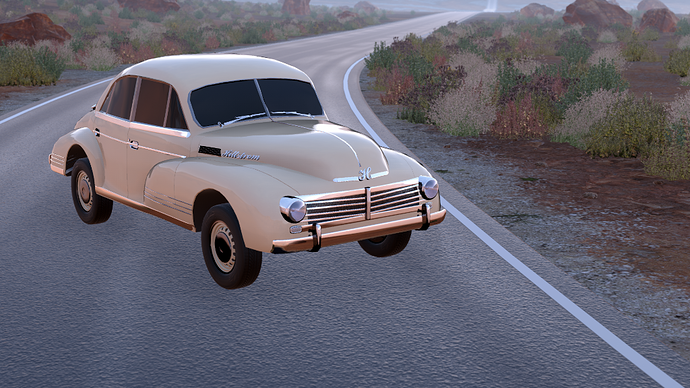 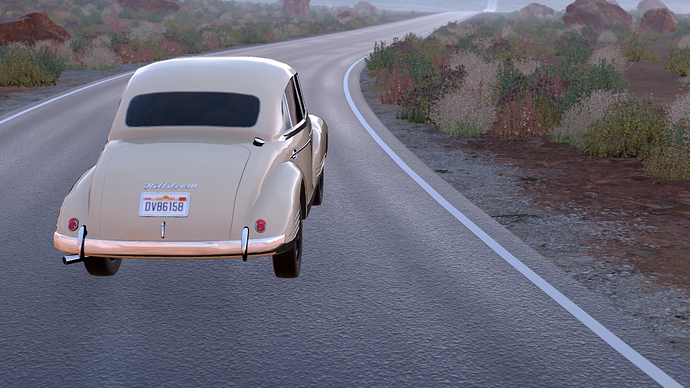 Photo141024×576 937 KB
Production was halted in 1942 because of the war. 1946 the Type A came back with a facelift. The whole front end was changed, as well as the door sheetmetal. The wipers was moved down below the windshield instead of being mounted above it, and the grille, headlights and parking lamps now had a more modern arrangement. The wheels now featured new, larger hubcaps, the fender extensions on the doors were made longer, there now was a fresh air inlet for the heater instead of only recirculating the air, and the chrome trim was rearranged. In the back, though, not much happened except for new taillights, mounted more flush to the body instead of being in separate housings. Technically, however, not much happened at all.

The facelifted Type A was only produced for two years, before being replaced by the all new Type D in 1948.

For a car with pre-war roots, this one is surprisingly well-equipped, and it laid the groundwork for the all-new Type D that would take Hillstrom into the Fifties.

Honestly speaking, I doubt that USA or even any other place outside the UK was ready for a premium compact back then, but it wouldn’t be the strangest thing that has happened in Automationverse… I try to keep this company kind of innovative on small resources without losing the american flair. Think AMC without being anything like AMC, if that makes sense. With a dash of International Harvester and some Willys thrown in… But yet without ripping off an actual manufacturer. 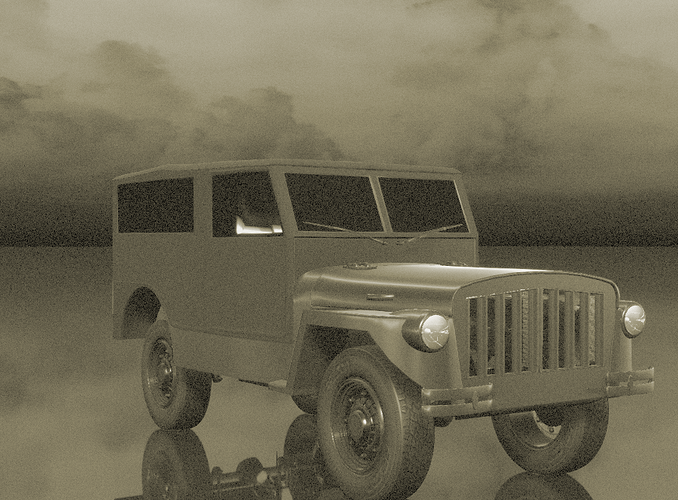 Not much is known about the 1942 Hillstrom Type B anymore. Originally intended as a military vehicle, it was said to be inferior to the Willys Jeep in about everything. US armed forces was not interested and rejected the proposal. All three prototypes built was scrapped. The flat 4 under the hood was originally one of Hillstroms stationary engines, here specially tuned for low octane fuel and good for about 30 kW or almost 41 hp. 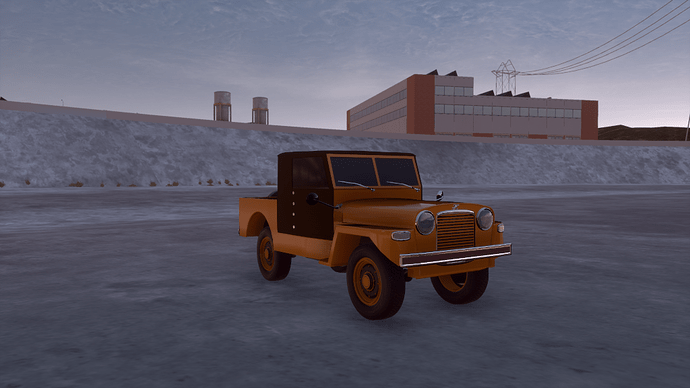 Photo271024×576 537 KB
The crude type B was probably still an important model, since it was developed further to the civilian and way more refined type C offroader, released in 1946. The flat 4 was still under the hood, but tuned for regular pump gas, giving a slight power boost and way better fuel economy. 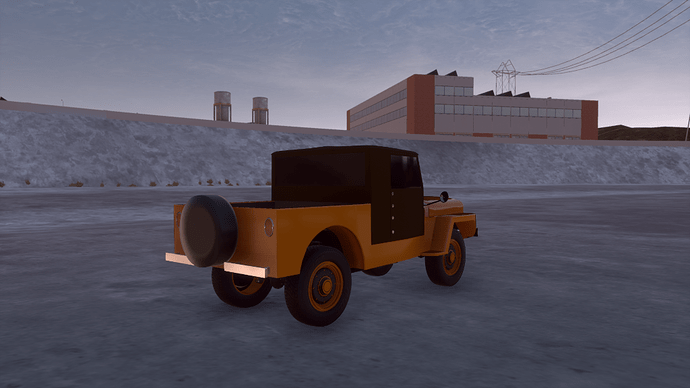 Photo261024×576 526 KB
Technically, it was a quite conventional offroader. A ladder frame with leaf sprung axles, and manually locking differentials. With this being many years before the SUV craze, it was a bare-bones workhorse, with a simple interior and no gizmos whatsoever. 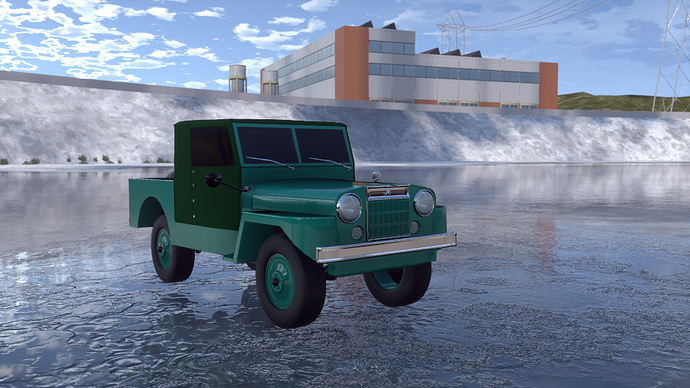 Photo251024×576 861 KB
The 1950 Type CB was mostly a cosmetical facelift. Technically, the largest difference probably was that the 8-lug 16 inch wheels was replaced with more conventional 5-lug 15 inch wheels. 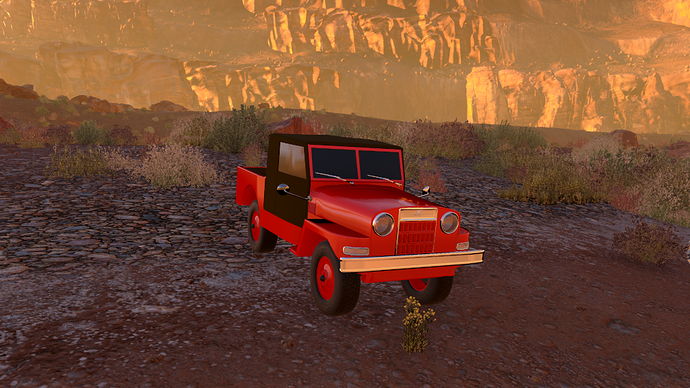 Photo291024×576 979 KB
The huge improvements came with the 1953 Type CC. Now the flat 4 with its roots in Hillstroms stationary engines was replaced with a new inline 4, based on the inline 6 from the Type A and Type D. The whole front end was raised to make more room for the higher engine, and there was a new 4 speed gearbox. Also, the braking performance was improved. This gave new life to the little offroader for three more years before being replaced by the 1956 Type CD, that despite its name was an all new design. 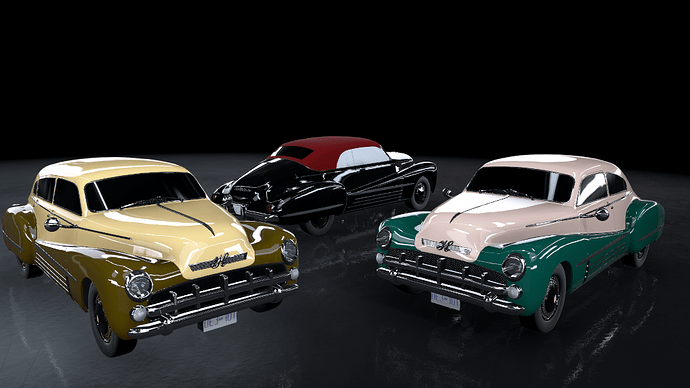 Photo1011024×576 475 KB
Even though selling better than the Type A, at the same time the Type D was one of Hillstrom’s first mistakes, of many. Compared to its predecessor, it was built on a nearly identical wheelbase, but with its outer dimensions shrunken. Hillstrom had a negative view that the american economy could take a big backlash after the war, and that people would demand smaller cars, but history proved them wrong, even though the Type D was filling a niche for a smaller car than the usual american land yacht, that still didn’t feel like a penalty box inside. 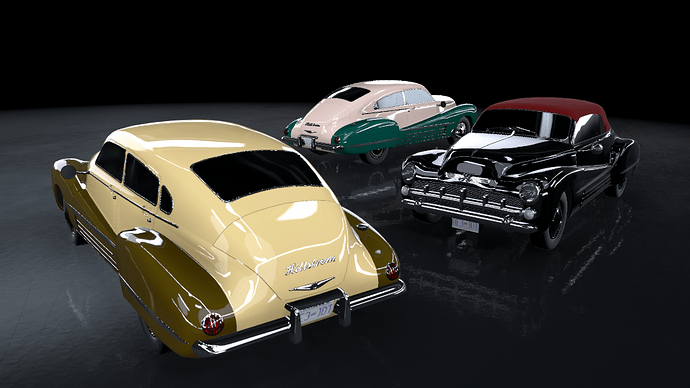 Photo1021024×576 521 KB
The 4 door sedan now got some company in the lineup by a 2 door fastback and a convertible. Technically there was not many marvels, it was still based on a ladder chassis, but the ancient leaf sprung front axle was replaced by a double wishbone unit. The engine was still the inline six, even though it gained some displacement by a longer stroke crankshaft, driving the leaf sprung rear axle through a 3 speed manual transmission. Like its predecessor, it had a nicely appointed interior for its size and price class, now a radio was made standard equipment too. 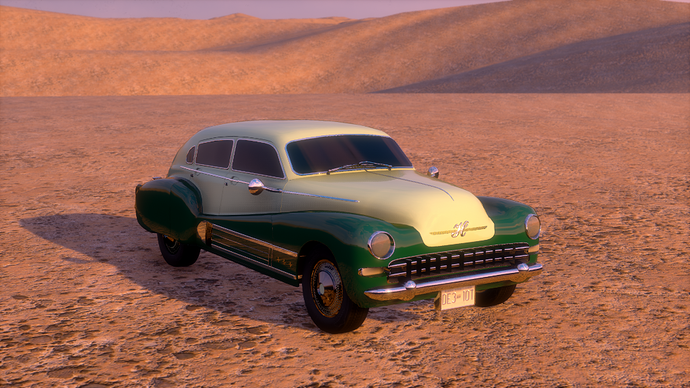 Photo1031024×576 905 KB
In a time where car designs aged quickly, it was hard for a small manufacturer like Hillstrom to keep up with the competition. But the Type D got a facelift in 1952 that kept it somewhat competitive until 1954. 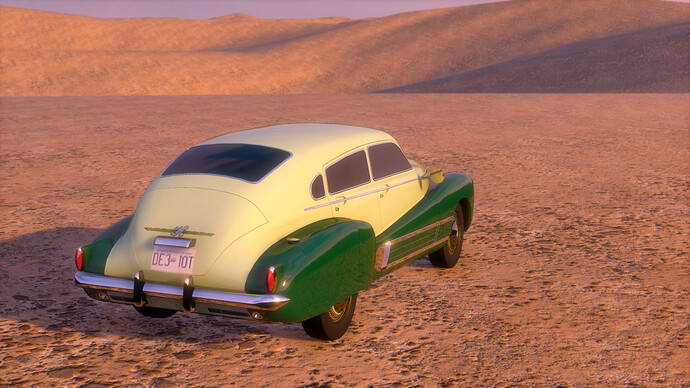 Photo1041920×1080 934 KB
Technically, the largest improvment was that the weak brakes of the early models was improved, being a popular upgrade for 48-51 models for that reason. 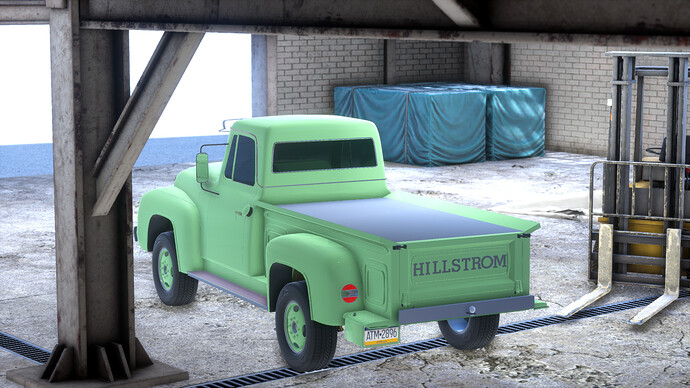 Photo2881920×1080 796 KB
In 1951 Hillstrom released their first generation of the long running Type F pickup truck. A pure workhorse built on a sturdy ladder frame, with solid axles and leaf springs all around. On the outside, there was a minimalistic approach with not much decor or chrome. A kind of unusual feature, however, was the externally mounted toolbox that also served the purpouse as a footstep and license plate holder.

The driveline was straight out of the Type D, an inline six cylinder mated to a 3-speed manual gearbox, though with a floor shifter instead of the column shifter in the type D. 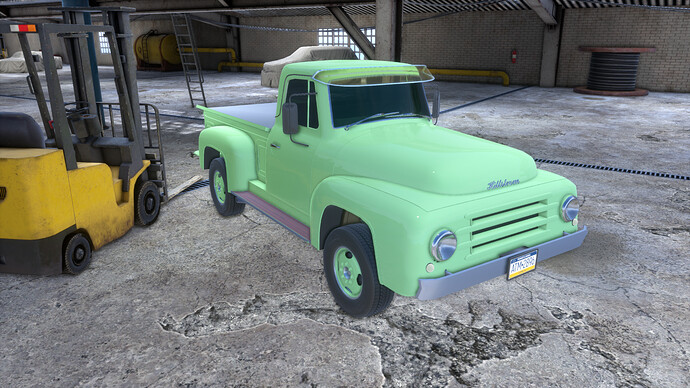 Photo2891920×1080 961 KB
It was as minimalistic on the inside as on the outside. A simple bench seat, lots of bare steel and a rubber carpet was what the driver had to endure. But with a robust construction and a payload of around a tonne, it had, and has, a big fanbase anyway.

The Type F was produced in its first generation with just minimal changes until the 1958 model year.

This brand never really took off for me, does not feel fun anymore and deserves better, since the potential is there after all. Anyone that wants to “adopt” the brand from me? PM me for info.

@TheYugo45GV is taking over this brand. Good luck. Up to you if you want to start a new thread or continue in this one.