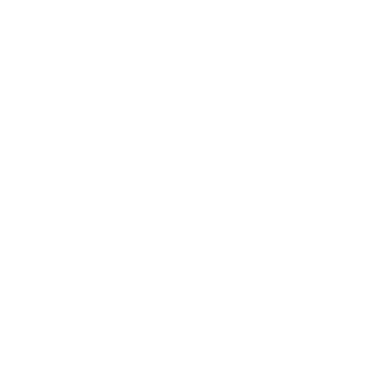 Hinode Motors Corporation (Japanese: ヒノデ自動車株式会社) is a Japanese multinational automotive manufacturer headquartered in Kokura (now Kitakyushu), Fukuoka Prefecture, Japan. The company was founded by Akira Sawamura in 1926 as a small repair shop that eventually went on to supply parts to Japanese aircraft, naval, and automotive companies. Hinode was left relatively unscathed after the Second World War and the company continued to supply parts for the occupying Allied forces’ vehicles.

Hinode Motors began to manufacture vehicles in 1949 after buying out a struggling automaker. The company’s first car was the Mahkota, a basic and rugged sedan. In 1951, Hinode began to manufacture the Jimmy 4x4 utility vehicle for the US military to serve in the Korean War. In 1964, Hinode began to export the Mahkota, Coronet, and Jimmy to the US and European markets. Although sales were initially slow, Hinode’s market share grew rapidly following the 1973 oil crisis as consumers searched for more fuel-efficient cars.

By the 1980s, Hinode was expanding. The company opened its first American manufacturing plant in 1982. During his decade, Hinode attempted to update its image by introducing sports and luxury-oriented vehicles into its lineup, resulting in the MR2000 mid-engined coupe, the Phoenix and Garuda grand tourers, and the Lucent luxury sedan.

It may not be the fastest car of its kind out there (it’s only a Kei car, after all), but the Z660 is rolling that a slow car driven fast is more fun than a fast car driven slowly. Keep up the good work! 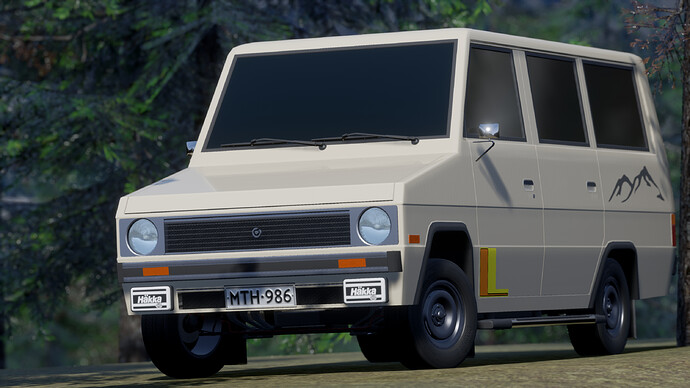 The Rusa has been one of Hinode’s mainstays in the Southeast Asian market since it was first introduced in 1980. Designed with Southeast Asian consumers in mind, the Rusa has several unique features and characteristics that make it stand out from the rest of Hinode’s lineup, as well as other vehicles sold in Southeast Asia at the time. The Rusa, though compact, is very roomy thanks to its boxy shape. This allows the Rusa to carry up to ten passengers using two rows of bench seats (seating six) and two removable benches at the back of the car, holding two passengers each. Despite this, most families would cram more people into the Rusa’s spacious cabin, especially during the mudik seasons where families in cities go back to their hometowns before a holiday begins. 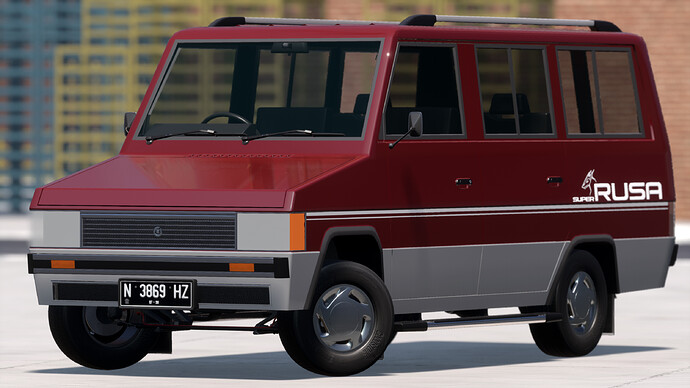 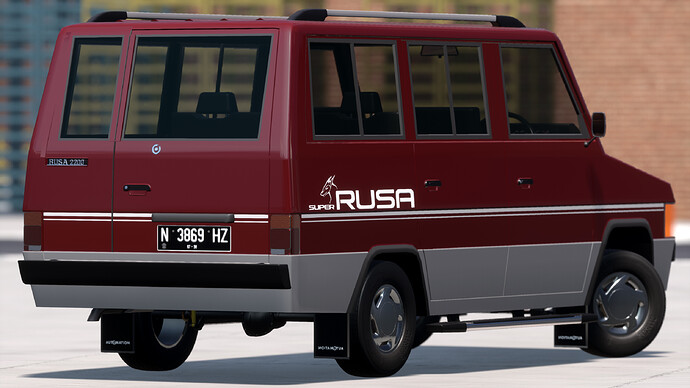 As the economies of Southeast Asia grew and people became wealthier, the had to Rusa change to meet the new demands of its consumers. In 1989, the Rusa got a bigger engine, increasing power and efficiency, and the interior was improved, adding air conditioning as a standard feature and replacing the front bench seats with individual bucket seats… In addition, the car gained rectangular headlights and a roof rack. The facelifted Rusa was known as the “Super Rusa” and was sold from until 1996. 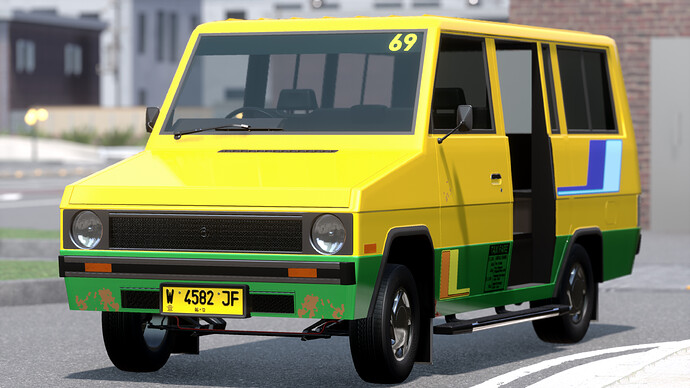 The Rusa was very popular in Southeast Asia, and is a ubiquitous part of everyday life especially in Indonesia. Many examples have also been converted into share taxis, and forms a large part of urban public transport in Indonesia to the present day. The car was also sold in Malaysia, the Philippines, Taiwan, Mainland China, and South Africa. For the South African and Mainland Chinese markets, a 4WD version was offered, which is made in China in a joint venture between Hinode Motors and Meixian Auto Works (梅县日出集团股份有限公司). The car is known as the Tenglu (腾鹿) in Mainland China. 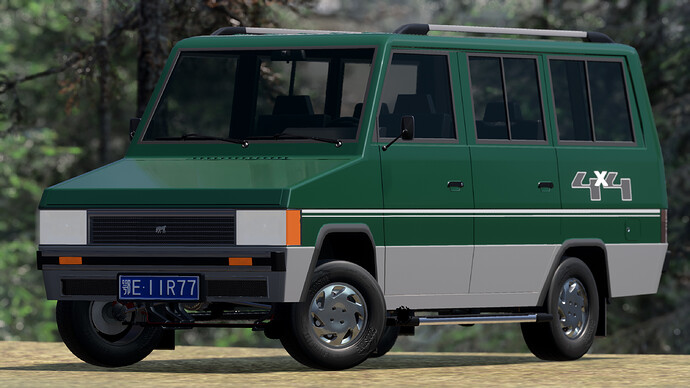 Today, the Rusa is seen as a lovely memory of the days gone by. Its simplicity and robustness has not been matched by any newer car on the market, and its outstanding qualities kept prices for used examples high. There aren’t many Rusas left out there that have low mileage, which goes to show that the Rusa truly was the workhorse of Southeast Asia, a car that helped drive the growth of the region. 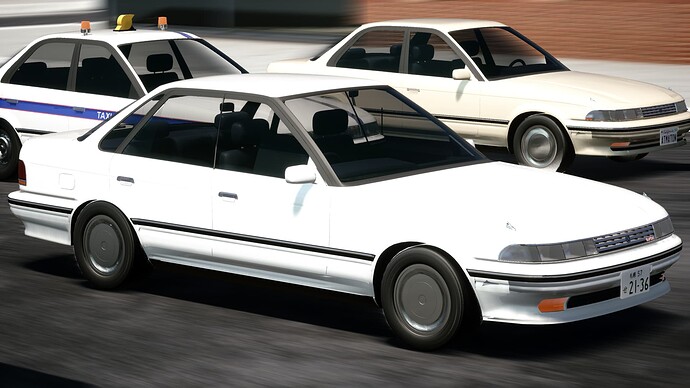 The sixth generation Tempest is a mid-size executive sedan produced between 1988 and 1996. This generation of Tempest is built on Hinode’s new Global 1 architecture, which was first used in 1986 on the Phoenix and Garuda grand tourers. As such, the Tempest inherited the grand tourers’ handling prowess and ride quality. All six-cylinder models used independent rear suspension while four-cylinder models used a solid rear axle to reduce cost.

The Tempest first went on sale in Japan in July 1988, and sales overseas started in August. In 1990 the Tempest was facelifted with updated bumpers and new engines. The Grande, GT, and Deluxe was discontinued in 1992 and replaced with the seventh generation Tempest while the production and sales of the LE continued until 1996.

The Tempest was praised for its quiet and comfortable ride, graceful handling, and stellar reliability. Spare parts were also cheap as the Tempest shared many common parts with other Hinode models. The Tempest remains popular today as both a classic car and a drift missile, owing to its rear-wheel drive layout and durable engine. 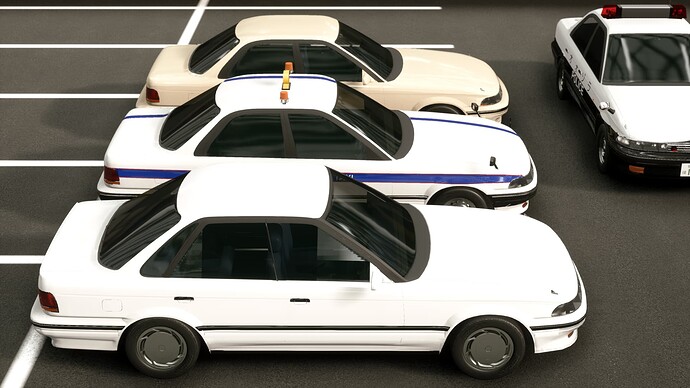 The Tempest is offered in two body styles: a 4-door sedan and a pillarless 4-door hardtop. The hardtop was only sold in Japan, although a few examples were imported into Hong Kong as well.