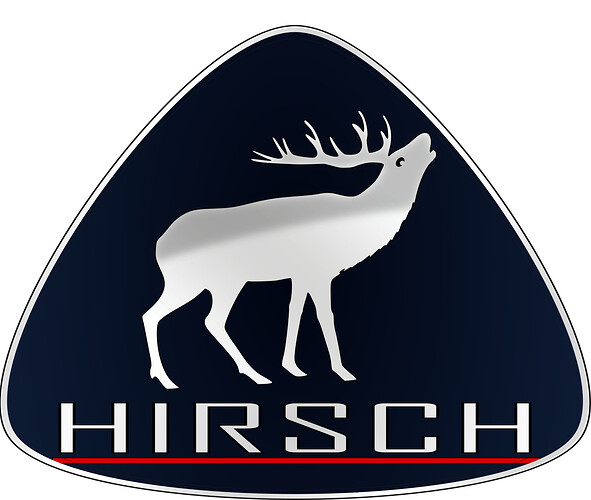 Hirsch Automobilwerke AG is a European automobile manufacturer founded in 1948.
Hirsch can trace its roots back to the mid 1930’s, when it started off as a producer of military aircraft. The first planes were produced under license, but were later superseded by the company’s own designs.

During wartime, the company was able to benefit greatly from the growing demand. However, as the war drew to a close and the market for fighter planes seemed to weaken, Hirsch had to look for new markets in which to diversify.

The first Hirsch automobile was unveiled in 1948. Actual production started one year later.

In 70 years of corporate history, the company has gained a reputation for building durable luxury cars that have always been on the leading edge when it comes to comfort, performance and safety. 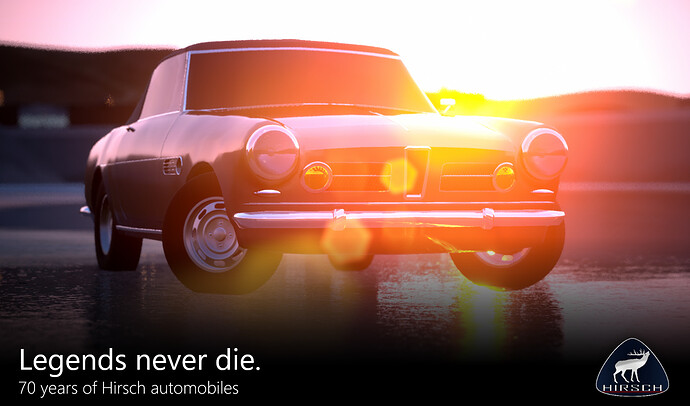 @szafirowy01 Well, I was not aware of that. Hope that is not too much of a problem?

Well, that depends on you, I’m just informing 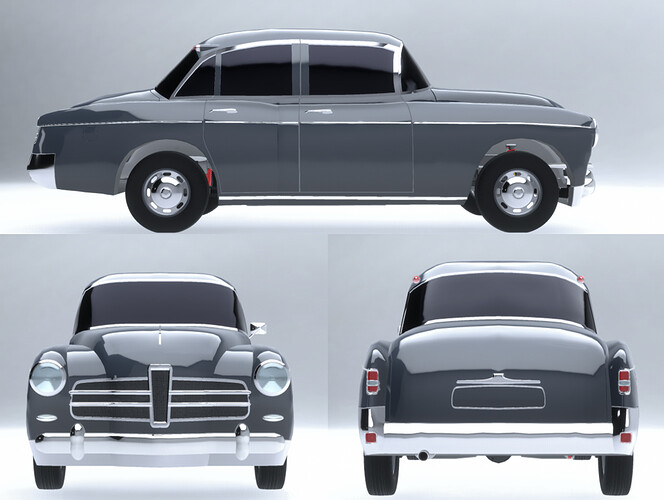 The Hirsch 2400L – internally code named Typ 10 – was an executive car produced from 1949 to 1956. Introduced at the Paris Motor Show in 1948, the 2400L was the first passenger car to be built and sold by the former aircraft manufacturer.

The 4-door sedan used an all-steel body moulded to a ladder frame with double wishbone suspension at the front and solid axle coil spring suspension at the rear.
It was powered by a 2,394cc SOHC inline 6 with a single carburettor that produced 80hp. The longitudinally mounted front-engine was attached to a 4-speed transmission with the gear shift on the steering column.

Thanks to its then revolutionary ponton, three-box design, the 2400L enjoyed an enthusiastic reception in the market place. Soon Hirsch was considered as a viable alternative to the established German or Italian brands.

Even the story behind reminds a lot of Saab, which was founded in 1937 as a military aircraft maker, and started making cars shortly after WW2…and at least in later years was in sort of that segment… (early Saabs were VW Beetle sized and had a 2 cylinder 2 stroke so quite a journey through the market segments over the years) 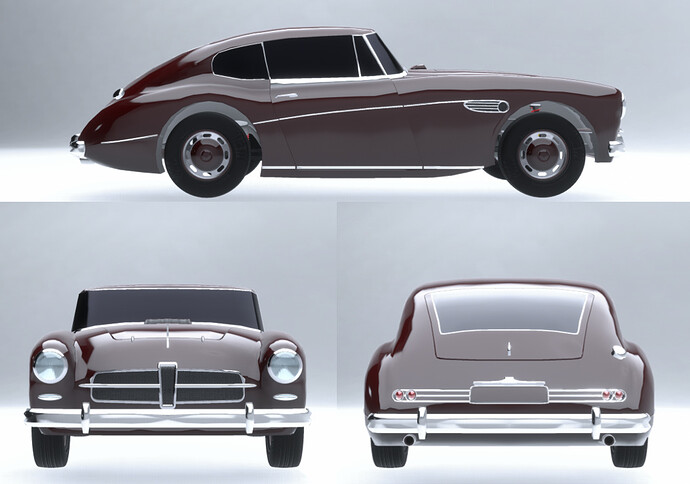 The Hirsch 2400SS (Typ 11) is a grand tourer that was introduced onto the market in 1950. The 2-door coupé combined the chassis and mechanicals of the 2400L sedan with the styling and hand-built aluminium bodywork of an Italian coachbuilder.

Nevertheless, the 2400SS was marketed as a luxurious and elegant 2+2 rather than as a true sports car. As such, it attracted many wealthy and famous customers, which helped to build the company’s reputation.

The Typ 11 was also the first Hirsch to be officially exported to the United States, opening up an important new market for the company.

Over a 5-year production run, the coupé was produced in a modest quantity of 256 examples. The 2400SS has since evolved into one of the most collectible cars ever built, and perhaps the most historically important model ever produced by Hirsch.
Today prices are generally in the $1,000,000 - 2,500,000 range. 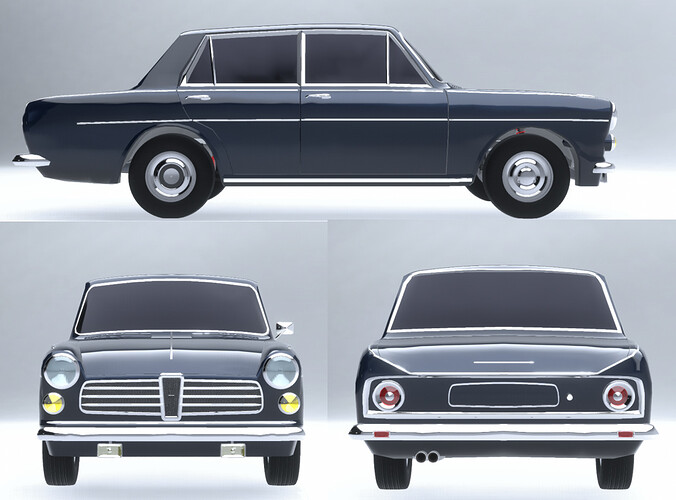 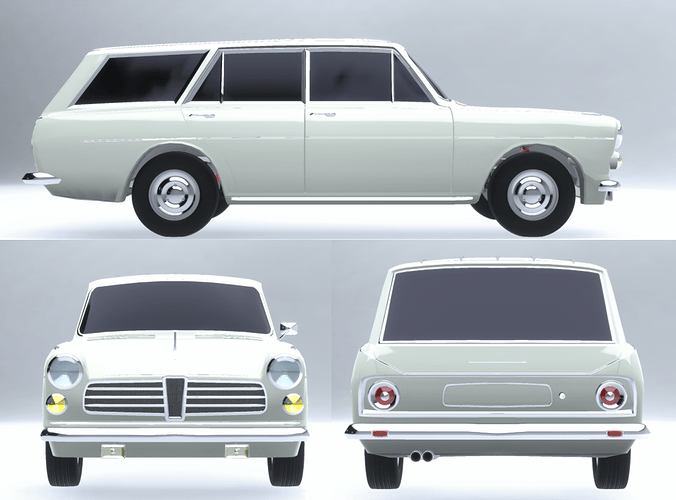 In 1956, Hirsch rolled out the Typ 21 as a successor to the Typ 10, which had already been on the market since 1949. The Typ 21 was sold under the name Ariadne, being the first model named after a Greek mythological figure.

Another novelty in the history of Hirsch automobiles was its all-steel unibody construction, which significantly improved torsion rigidity compared to the conventional construction of the 2400L models.

The suspension and the 6-cylinder engine used in the Ariadne 240 had basically been carried over from the predecessor. Engine power, however, had been increased to 100hp due to the incorporation of two carburettors. At the same time fuel consumption was reduced by 20%.

Half a year later, the model series was rounded off by the Ariadne 160. As a more affordable 4-cylinder model with less generous equipment, it was intended to attract new customers. Power was delivered by a 1.6L inline 4 (codenamed M14-16) that had been derived from the known inline 6 engine and produced 65hp using a single carburettor.

In 1958 the 4-door sedan was joined by the 5-door station wagon Tourismo.

The Typ 21 was unanimously approved by automobile experts around the world and became a great commercial success. It remained in production for 8 years without major changes.

Nice design and great consistency betweens the models.
Great to have a competitor for my 1955 Vitorino Patrono

Thank you! Apparently, the Ariadne 240 was directly competing with the 2.5L version of the Patrono at that time. 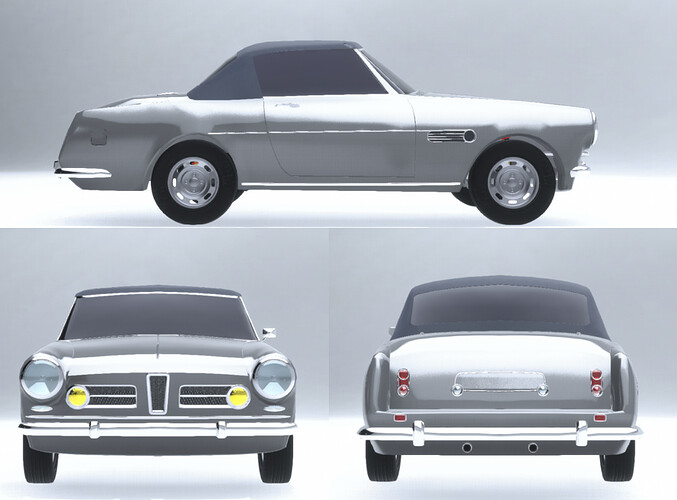 The 2-seat roadster was based on Ariadne (Typ 21) mechanicals, including its unibody construction, independent front and solid axle rear suspension.
It was fitted with a 1.6L engine brought to 80hp thanks to twin carburettors and a higher compression ratio.

The Typ 22 was tailored to affluent performance enthusiasts in the booming post-war American market and was available either as a soft-top convertible or with removable hardtop.

Production numbers demonstrate, that the Ikarus was rather successful in its time: Between May 1958 and August 1963, more than 20,000 cars were built, the majority of which were destined for the US market. 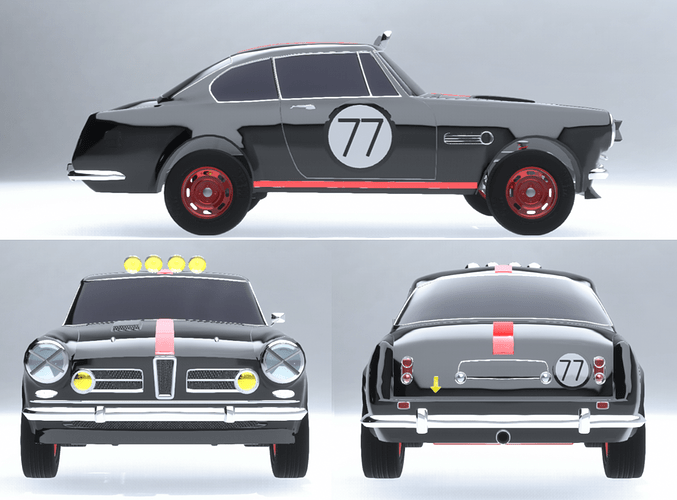 The Hirsch factory’s first race car was a slightly modified Ikarus hardtop coupé that debuted at the Monte Carlo Rally in 1959. However, as it did not come to a success, Hirsch stopped competing in 1961. 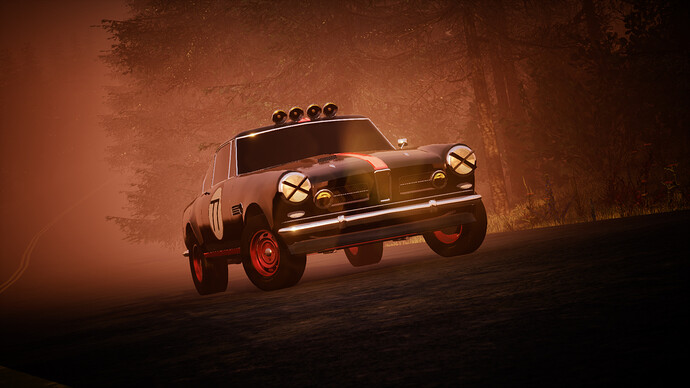