How did I Eff this up? 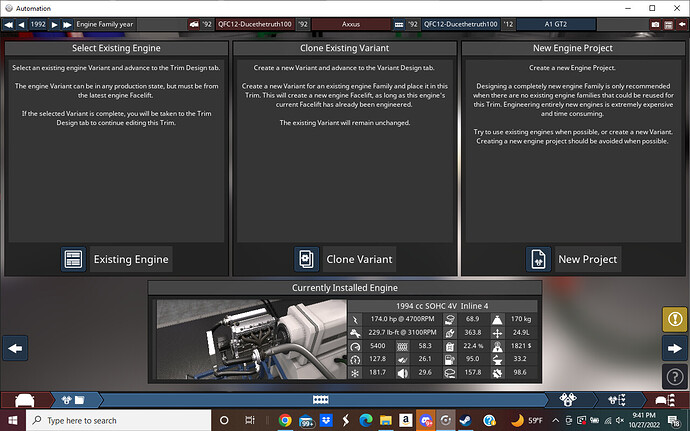 Im not asking yall to re-create my movements but, Im simply wondering how does that happen?

I will check but Im not sure if thats an engine I have for a '12 car and tried to reverse the yr to '92?

I dont remember if I made that engine from scratch or not.

Ive been binned for this before, so there’s SOMETHING Im doing wrong, that I THINK is right…Im guessing.

Should I name my engines a certain way to avoid this?

Depending on when you made that car initially, there was a bug where the engine year defaulted to 2012 regardless of the actual family year.

I saw that bin and I wondered. I realize folks run their competitions the way they want but I found it more kind to let the submitter know of the error at least once before binning, unless it’s just ridiculous on purpose.
Especially with this product, all hell can break loose and you just never know, and it can certainly not be anybody’s fault. We should “pad” our expectations and be mindful of intent and opportunities to correct, imo.

What’s set to 2012 is the “engine variant year”, which you, as Admiral said, needs to keep track of to be sure that it is set to the correct year.

The difference? Well, if we take an engine I am sure you’re at least somewhat familiar with (knowing that you’re a GM fanatic

But to build a realistic car, that’s stock, the variant year of the engine can’t be newer than the trim year of the car. It would be like if you put that 350 TPI in a 1955 Chevy, it would be a restomod and not an original car. It would also have been absolutely impossible in 1955 because it was 30 years before the 350 TPI existed.

I hope I did explain it clearly enough?

Same happened to me on the same challenge as I commented on the challenge’s topic as well… My steps where I think I went off is when I duped the car and recreated the engine from scratch. Maybe something like that happened to you as well?

@RAZR I didnt duplicate the car. The only thing i MAY have done was took a 2012 engine and rolled the year back to '92, because I have done that before. But I could’ve swore I made that engine from scratch.

When I started up the game today, I saw something about that the latest hotfix had fixed a bug that set engine variant years to 2012 by default. I guess this fault might have happened because of that bug. (Possible to fix by reverting variant year to 1992 of course but maybe not so easy to think about).