How much power is needed for agriculture?

How much horsepower and torque is required to do most tasks on a farm?

I am making a truck that can be used both for agricultural needs as a tractor, scout, and towing vehicle in automation. This truck is a short wheelbase truck with a long bed and I would like to know how much torque and horsepower would be enough to do all agricultural work on the farm.

The truck produces 100 lb-ft of torque and 90 horsepower.

This is a 90 hp tractor…I would not worry about the power output if I was you, it’s a matter of gearing. Such a “jack of all trades” would never be used for any serious farming in modern day anyway.

This website is part of what is the needed power for agriculture. As the website explains the horsepower figures that could be used for different levels of agriculture.

1-25 horsepower would be enough for small tasks such as moving fields and are usually compact tractors.

25-45 horsepower would be enough for much more intermediate tasks such as manure handling as written in the article.

45-85 horsepower would be enough to pull trailers such as rakes, scrapes, and spreaders. These are usually used for more utility based situations.

85-450 horsepower(A giant leap made by the article) would be enough for full scale farmers who need to cover large acres of land more efficiently and effectively.

A quoting of the article:

“So how much horsepower do you really need?”

“Unfortunately, there is no straightforward answer. We wouldn’t recommend going below 25 engine hp, but aside from that, you need to assess your land and your needs.”

“If you need to do basic mowing on flat terrain, find a compact tractor with 25 to 30 hp. If you need something more substantial for plowing, invest in the 45 to 85 hp range. For full-scale farming, a row crop tractor is likely your best choice.”

“Remember, if you can find a compact tractor that’s in the same price range as a lawn or garden tractor, go with the compact model—you’ll end up getting better features without spending a lot more. In the end, budget and overall needs will dictate your choice, with both horsepower, brand and style.”

The suitable amount of power for farming?

The answer isn’t clear, but regarding to a situation of Automation where if you would want to make some kind of tractor or truck made for agricultural use, you would want to be in the range between 75-150 horsepower to satisfy most needs of farming.

The article does not provide information regarding torque, so we must research about what would be appropriate for some farmers needed something to both plow their lands and reap what they sow.

This is the equation: hp. = torque × engine rpm ÷ 5,252 as stated in the article. Which is the Watt’s equation to convert to horsepower.

I stated the horsepower figures between 75-150 depending on the work to be done while being for light work. Not as to discredit the other power figures as they have their specific needs that can be done by them. This research is to help other make some agriculture based vehicle to help with general farming.

The thing we must know is the RPM, this would be dependent on many things

This website states that most applications of tractors would be around 2500, though these are diesel and so 4000-5000 rpm would be more in the case of an assumption but to better suit automation.

The power and torque for agricultural applications to be best suited for general usage:

After digging through this long rabbit hole, I have come to the conclusion that an effective farming vehicle especially a truck would be best suited with 131.3 lb-ft of torque and 112.5 hp.

In addition to this, a good torque curve would be needed in order to preform better in addition to gearing and such.

A manual, automatic, advanced automatic, or CVT(not as the most picked) would all be good options.

A manual or electronic lsd would be good differentials to use.

So yeah, I spent an hour on this. Lol.

Farmers have been known to do well with just one horse or two, if connected. Oxen were good too.

All joking aside, torque down really low helps. Large undersquare motors with excellent efficiency and large flywheels seems to be the best. For a truck, we’ll consider that the truck will be doing more than work on a farm. It will also be hauling smaller loads to and from the farm on the highway or at least a standard road. A straight 6 was the best choice back in the day.

Joking or not, there was actually one vehicle that was used more than any other as a similar “jack of all trades”, the Willys Jeep, that had a puny little inline four. We still get that vehicle in modern form as the Jeep Wrangler, and I am totally sure that very few people buy that vehicle to do agricultural chores. The reason? Well, IIRC “Dirt every day” on Youtube actually tested a new Wrangler to see if it could stand up to the task - and it did.

It is more a matter of times that are changing. If you make a living out of farming, it has turned out more and more towards needing to more or less do industrial farming to be able to survive. And frankly put - you need a machine that is tailored for what it is supposed to do. Real tractors, and large ones too. No farmer would buy such a jack of all trades, no matter the power, because it would have too many other drawbacks, so I am pretty sure that the 90 hp you have will be enough to do all the farm work your vehicle would be used for. Though, I guess that a hobby farmer would be better off with a 10 year old Silverado and a smaller 30 year old tractor, to get a better truck and a better tractor for probably less money. But yeah, don’t let that stand in the way for making a cool concept vehicle in Automation.

The problem is maybe that a minimum requirement for this to work well, would be a low- and high-range transfer case, something that Automation would not bring into its calculations (even if I presume that the 4x4 option actually puts one in, but would not do calculations in low range that is mostly interesting for offroad use anyway). 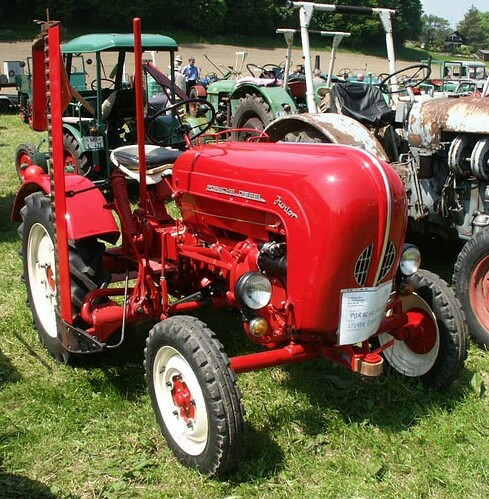 I was trying to make something that would be used as a tractor being connected to rakes, scrapers, plowers for the fields. This vehicle being both the truck to haul and to work as a tractor as well.

So basically a truck that do the agricultural work that a tractor can do while still being a truck that can roam in the farmer’s market.