How to interpret the safety score

I have a question to ask about the safety score and how it is to be interpreted. I would like to know if it is a simple additive value or if the score is contextual to the time period.

I would like a Dev to clarify this as I’ve run into an issue which vexes me but I don’t have enough data to know if my intuition is correct.

The issue at hand is this:

Conventional logic would say the car is now less safe, by 3.9 points, but my problem with this is that a 60’s safety package is a deathtrap and is scoring well, subjectively to it’s era, whereas the lesser score of 30.8 in 2020 is objectively much safer than the nominally higher score from the 60’s.

So, are safety scores comparable from different eras, or is safety scored in context to its time period?

Link to the competition thread for the original car file.

I think the scores should be able to be compared directly. The question is why the new car scores worse. To understand it, it would help if you posted the detailed stats screen for the safety stat for both cars. Then we can see where the car really got worse or if there’s a bug at some point.

I am not in the position to explain this, but one thing that I have felt sometimes is that the level of safety affects a little bit too much, and the age not enough to be accurate. You can get quite high scores on an old car by giving it “advanced” safety, but in, say, the 60s, that was hardly much more than seatbelts, a padded dashboard and maybe, in the best possible case, a collapsible steering column, all of them seen as basic requirements for a really long time now.

I don’t have scientific proof for this, I have just had the feeling sometimes.

To understand it, it would help if you posted the detailed stats screen for the safety stat for both cars. Then we can see where the car really got worse or if there’s a bug at some point.

OK, I’ll collect the data and post up some pics, then we can get to the bottom of this conundrum, hahaha!!!

This is the screenshot for the original car’s safety data: 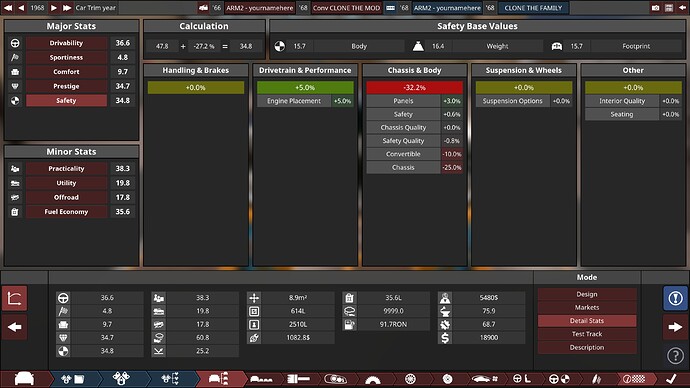 And here’s the data for my competition car: 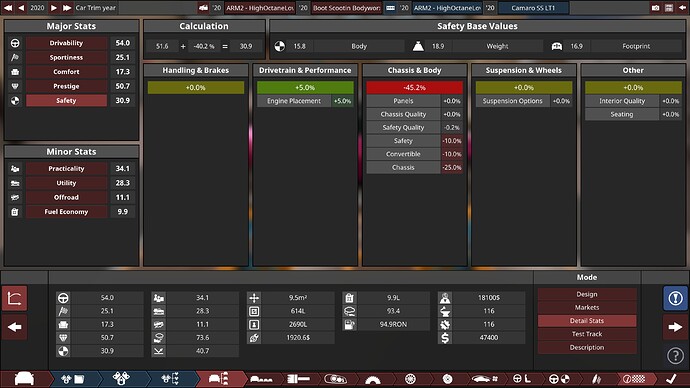 Hopefully this will help shed some light on the issue, however I agree with Knugcab that safety in different eras are unable to be directly compared so if the safety stat is meant to allow comparison with different eras then it massively undervalues modern safety technology, hahaha!!!

Your safety is set to Basic 10s and partial CF doesn’t help matters either with a ladder construction.

I thought that 180mph would have had an impact on safety (pun not intended) but apparently speed isn’t taken into account…you’re going to die, just as badly, at 40mph!