So heres the big deal: Korea needed car after a war or two, and Huwonja came in to fill that gap. 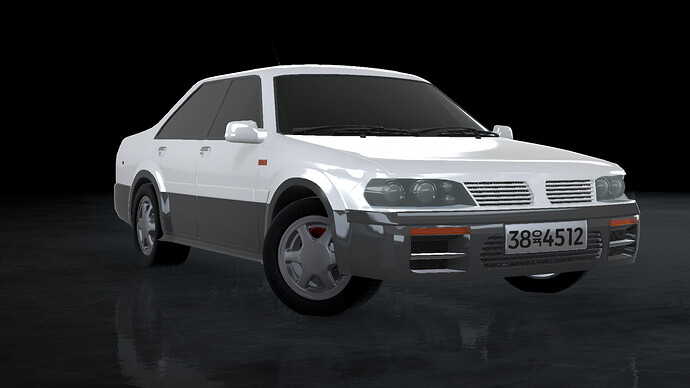 The fastest, being the GX model with the SixTec III making 250hp, was branded with GTF-R badging, although having almost no cosmetic modifications for a sleeper look. All models came standard with the top safety tech availible at the time, and higher trims like the CE or LE were equipped with 5 or 6 speed automatics and premium CD systems. However, if you asked nicely, you could have a 5 speed manual.

The car sold well until 2003, when it was replaced by the second generation 미래의 .

Engine choice was between 4 types this time: the measly 1.2.L inline 4 called the TK-84, the slightly beefier 1.6L TK-87, the low hp but high torque, essentially caravanners engine 1.6L inline 4 named the TK-87c, and the best choice for most, the TK-91, a 2.2L inline 6 pushing out the most power.

Buyers didn’t feel exactly awestruck by the funky wheel trims and would either replace them on the forecourt, bringing new trims beforehand, or spec some nicer looking alloys.

Aesthetically, the original design isn’t too bad, but the mechanicals are what make this car stand out. In particular:

Quite a decent engine range for a contemporary South Korean car, but 150 bhp from a 1.8L I4 would be better suited to a smaller, lighter sports coupe or hot hatch than a full-size sedan. The top-shelf 3.2L I6, however, would definitely have been a formidable rival to Jap and Euro imports. No wonder the whole range deserved to be sold in the West - they would have sold like hotcakes! It makes its immediate successor seem like a downgrade by comparison, given that the newer car had much smaller engines.

Now the 150hp version may seem like it would be fast, as it was designed to compare to the Japanese sports coupes of the time, but marketed with 4 doors and a boot for bigger families. The I6 version was originally planned to be a V8, but that would be too uneconomical.

The designs doesn’t sound like a first-timer, rather a seasoned player. Nice job.
BTW, what’s the vehicle’s English name?

In english, the name means “Future”, as this car was technologically advanced for it’s time.