Impaler Automotive (Formerly Impaler American Motors Company), is an American auto manufacturer founded in 1911 based in Dayton, Ohio. Businessmen Russel L. Crawford (1865-1961) and Lawrence E. Wright (1859-1955) originally founded Impaler for the production of “luxurious horseless carriages” and were relatively successful until the Wall Street Crash of 1929, and the company’s revenue plummeted, which caused worker strikes across Impaler’s 5 factories at the time, subsequent restructuring under the Crawfords’ management did manage to bring Impaler out of the ashes and eventually turned into one of the biggest American automakers going into the early 1950s.

In 1961, the Impaler brand was sold to businessman Elmer McNewell for $165 Million (Today worth 1.5 Billion) and integrated into the America on Wheels Foundation, a conglomerate of the biggest US based automakers at the time, which was eventually exposed as a scam and McNewell a fraudster, by 1965 Impaler had once again become an independently trading company, now under the management of Scott Crawford.

From the very start, Impaler’s history was a bleak one, both founders had a reputation for being extremely racist (Both being close friends of Stephen Torrento I, who was also known for being a racist.), refusing to hire black men and holding certain whites above others. Corruption and negligence ran rampant across all factories, causing the US Government to launch an investigation into the company in 1919, removing Crawford and Wright as company CEO’s, being replaced with Crawford’s two (non-racist) sons, Mitchell (1876-1978) and Arthur (1880-1966), under the Crawford Brothers, worker-manager relations improved drastically, black men were allowed to work in the factories and all employees were equal in manager opinions.

Lets paint a picture, you’re 50, power washing your driveway and you realise, “my kids have all moved out, I have a bunch of cash from my job I’ve been in since the late 1980s, and I need a ride that can get me from Maine to California in style.” Look no further, with it’s 6.2L N/A V8 with 350 reliable (kinda) horses, and even though you’d probably never take it out of the garage anyways, it’s got RWD and a 6 speed automatic.

This girl will make you appear many years younger than you actually are, with it’s timeless American styling, saying “Race me at the lights ya whippersnapper.” with a roasty orange paintjob and the white stripes seen on the classics of American motoring. Despite all of this, everyone will still see this beast on the streets and instantly know the driver is probably a 50 year old guy like you on his way to go golfing going through his midlife crisis. 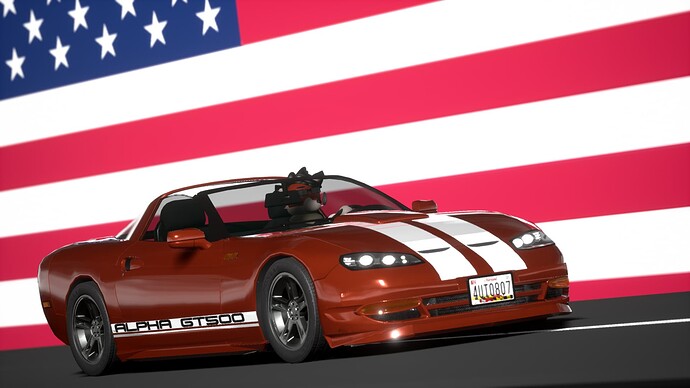 If this doesn’t shout “American Muscle Car” more loudly than anything else, I don’t know what does.

Peak America in the form of an odd rumbly wedge with wheels.