Ok, so, let’s take a look at Safety, in the open beta version of the game. Specifically, I am going to reference several things: 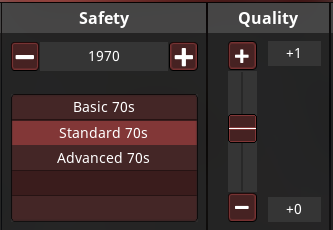 This is what I am going to call the safety options pane. In it, you can decide three things: Decade, tier, quality (slider). It outputs to…

So, through some basic testing, I have found the following:

Okay, so, on to the bigger issue I have found…
Tier is more powerful than decade.

Safety glass prevents injury from glass shards and the dashboard controlls are recessed into their housings to lessen impact injuries. Bumpers are designed and tested for impact absorbtion, and some dashboard padding is provided. The front panels of the car are engineered with some crash protection in mind.

Safety glass prevents injury from glass shards. Dashboard controls and door handles are recessed into their housings to lessen impact injuries. Bumpers are designed and tested for impact absorbtion, and extensive dashboard, sunvisor and armrest padding is provided. The front and rear structure of the car is engineered to deform on impact to protect the passenger compartment. Front passengers are provided with lap-sash seat belts, rear passengers with lap belts. Doors are engineered to remain shut in the event of a crash. Roof pillars, firewall and sills are somewhat reinforced to make the passenger compartment more resistant to deformation. The steering wheel is well-padded, with some flex built-in to reduce impact forces, and the steering column is designed to collapse. Front seats have headrests to prevent neck injury.

So, which of these sounds safer? Every single feature of advanced 40s is contained within standard 70s. Advanced 40s has no seatbelts. No headrests. Protection from rear collisions? Just don’t get hit.

Well, here’s what standard 70s looks like in 1980. It reflects what I mentioned. It’s a lower tier than advanced, so safety (modifier) is comparatively low. It’s brand new tech, so quality (modifier) is fairly small. What about advanced 40s?

Yup. That’s what advanced 40s looks like in 1980. Advanced 40s is safer than standard 70s. More expensive too, in production units, engineering time and materials. This is true for any arbitrary car.

Oh, and it gets worse too. I made a pretty boring, vanilla small car. It’s not a good car, mind you. It can assuredly be optimised. What matters here is that it has sensible design choices. Most of all, that it uses basic 10s. What is basic 10s? Well, it’s like standard 70s, but with even more added in. Basic 10s is better than standard 70s, according to the tooltip. I don’t want to write out the tooltip personally because it’s even longer than standard 70s, trust me.

And hey, because it’s a 2020 car, it’s got very high modifiers on both accounts.

Okay, let’s use standard 70s. Here’s the detailed stats for that, keeping everything else the same. 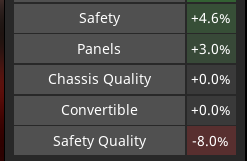 I have to include more data for advanced 40s, because, well, the game sorts by magnitude. Advanced 40s is still just so much better than standard 70s, but at least it’s least safe than basic 10s, right? Right?

Well, that ignores one of the key stats in how safety is calculated: Weight. See, despite how little it includes, the car with advanced 40s safety is around 17% heavier than the car with basic safety. The car with standard 40s is around 7.6% heavier. According to Automation, heavy cars are safe. Indeed, weight and footprint are two of the three constant, non-modifier parts of safety. Yeah, so… In certain cases, advanced 40s is better than basic 10s.

In fact, the only impact of decade selection is the safety (modifier) I mentioned, plus a change to material costs. Standard 70s weighs the same and takes as much time to engineer as the trivial standard 40s or the intricate standard 10s. Never mind the fact that, in the real market, safety equipment is a major driver of increased weight. The same is true of entertainment options - the only difference between standard infotainment and standard entertainment is material costs, comfort and prestige. Entertainment is a little more complex so I was unable to find another “super outdated option better” case, but it’s still wild that there’s no weight, engineering or production unit impact.

So, why does it work like this? Why is Advanced 40s always safer than Standard 70s? I have a theory.

See, before 4.2, the “standard 70s” and “advanced 40s” cars simply couldn’t exist. You were restricted to relatively recent options. The ability to just pick whatever is only a recent addition to the game. Before 4.2, the options were sort of balanced, because you could never have these options in the same car. In 4.2, though? This feature got added, but the balancing wasn’t really checked again. It’s an alpha feature. It’s there, but nowhere near fully complete. And yeah, that’s what we opted into when we opted into the beta, which is why I am reporting it here, like this.

I’ve added a link to this evaluation to the Jira so someone (probably Rob) can review how this works, and it might get changed at some point for the 4.2 dev cycle, if not 4.3.

The issues around safety also have some ‘interesting’ implications for campaign gameplay. For instance, let’s say you designed a 1960s fibreglass bathtub with Standard 50s safety. The car (barely) stayed legal for the 1970s with unchanged safety.

To sell it beyond 1979 (whether it’s sensible or not), among your options are Standard 60s and Standard 70s safety. While it would obviously be much more effort to make the 1960s fibreglass construction conform with Standard 70s compared to Standard 60s, the only difference currently are that Standard 70s costs 8$ more in material cost…

So one thing to consider could be the ‘distance’ between the original model year (1960) and the safety decade.