Welcome to the second Journey of Ownership chapter. See round 1 for history and basic rules.

Based on an idea by @BannedByAndroid I thought that since some people seemed to like this idea, I could as well host the pilot round. I had thought out a ruleset but as usual, I thought too much and overcomplicated things so I decided to mainly use Banned’s ruleset, though I have an idea of a couple of additions. Each character must be played for at least 3 rounds. That’s because I feel like it won’t be any “journey” with less than 3. One round would only be a CSR ripoff, two rounds not eno…

Kenneth Bower now lives in the big city. A boy from St. Paul MN, his family moved to Chicago after the war. He’s 19 years old now and he’s following in his father’s footstep to become an airline pilot. With the space race in full swing, he’s always dreamed of becoming an astronaut but a plane is going to do for now.

He’s driving an old '42 Chevrolet right now and while he’s still waiting for his big payday, he has a big chunk of money available and he’s looking to buy a brand new car. With the super large cars on the road today, he’s drawn to smaller, youger cars that seems to slowly appear on the road. He’s not looking for a sports car per se, but he for sure would like something that pops and certainly not a boring economy car. He will not splurge needlessly however, despite his budget.

He’s romantically involved right now, but he’s fully dedicated to his career and he just needs at a minimum 2-seater coupe for now, but more space would not hurt. A convertible could be a nice thing, but he’s not living down south anyway.

His dad is slowly entering his 40s - he survived the war as a pilot, and now flies commercial out of O’Hare. Kenneth is very close to his father, being the firstborn out of 5 other sibblings - none of them are looking to follow in their father’s footstep tho - everything rests on Kenneth’s shoulder.

However, lately his father started having some health problems. Hopefully nothing major, as Kenneth is 100% focused on his career now and he’s not looking to provide for anyone anytime soon. One thing for sure, his father is proud of his elder son.

Posh 19 years old with daddy’s money, but also at the start of a promising pilot career, wants a peppy compact car, still quite rare in the US.

He does not want a pure unusable sports car, but a sporty daily driver coupe or a personal luxury coupe as they were marketed. He know smaller cars are quite new in the US and does not mind an import as well.

However, it must not look or smell like an economy car at all. A modern or young look is a big plus to him. He also has a good budget, but he’s also cheap so value is very important.

Style
He wants something young, more modern, exciting, not a bland coupe. Maybe even peculiar or unique. The 50s is home to a lot of eccentrics and industrialists trying to make a car.

Fun & Drivability
He primarily wants to cruise around and have fun. As a pilot, he also likes being in control - a manual would be prefered.

Value
He has money to purchase something pricy, but he’s also a bit, erhmm, frugal as his father taught him - he does not want to splurge unless it has a ton of value.

Prestige & Status
Of course, as a rising star, he wants a bit of status. An import could also get him something more unique, but there is also lots of local oddball choices in the US at that time.

Comfort
While he wants to be comfortable cruising around, for sure he’d rather people talk about the car than how comfortable he is in it.

Sportiness & Performance
Kenneth does not want a pure sports car, but he will not sneeze at performance, handling and speed. Acceleration seems to be all the rage nowaday and might be more important in his mind.

Service costs & Reliability
He’s not looking for a pure expensive sports car, so he’d like to keep it simple in terms of maintenance - he does not have time to work on the car himself.

Safety
Always important, but much less here. Safe can never be exciting in Kenneth’s mind.

Fuel Econ
As many in that era, not a major priority, and he especially does not want something that screams economy - even a big powerful economical engine would be a bit of a turn off for him.

IMPORTANT: With the new Tech Pool effects, price and ET especially are subject to be modified before the submission period starts. Feel free to comment.

TECH POOL: Both the engine AND car needs to be +5 TP everywhere. See screenshots below on how to check. New cars are by default at +5, old cars needs to be updated.

YEAR, CAR TRIM: 1950-1956 only. With the techpool, the body can be a lot newer.
YEAR, CAR MODEL, ENGINE FAMILY, ENGINE VARIANT: Car trim year or older
NAMING CONVENTION:
Car model/trim: JOC2A-yourname / Make and model
Engine family/variant: JOC2A-yourname/ Name of engine
ALLOWED BODIES: Coupe and 2-door Sedan only. Fixed Head, Targa, Hardtop, Fastback, Speedster, Roadster or Convertible are all options.
SEATS/DOORS: 2 doors only. 2 full seats minimum. +2 seats in the back might play better for Kenneth than a bench in the rear if offering more than 2 seats.
WHEELBASE: Maximum 2.84m/112 inches
MAXIMUM PRICE: $18,000 AMU
MAXIMUM ENGINE ET: 65 ET (to be evaluated with new TP) - no allowance for mixed material.
MAXIMUM TRIM ET: 65 ET (to be evaluated with new TP)
FUEL: Leaded regular (92 RON/87 AKI) is preferred. 98 RON (93 AKI) is also acceptable, but might have some small impacts on some priorities (both positive and negative)
INTERIORS: Not needed and won’t be judged, but I will review it if you do provide one.
REALISM: Unrealistic engineering or styling might result in a bin, that includes, but is not limited to, race parts, semi slick tyres etc. 50s features applies as well, including for imports. Only one non-resized plate at the back is required otherwise.

Which brings up the sandbox techpool box. Just set everything to 0.

Edit: Requesting allowance for 2-door sedans - some bodies have fixed-roof coupes, whereas the convertibles only come in 2dr sedan form

Fixed the +0 mention and also added 2-door sedan as available bodies - I agree, it covers more inspiration and the era, as long as it feels like a coupe.

Rules will be closed in about 12 hours, any comments on the ET and price requirements or others?

The ET limits take into account the effects of the tech pool at its default values - if all tech pool values were 0, it would be impossible to even get close to the maximum ET values.

I know you were supposed to have closed rule deliberation already, but are you sure on the 92 RON requirement? This is a sportscar. Zora’s '55 corvette was likely running on 98.

He’s not looking for a pure sports car like you’d find in Europe, even purely a 'vette might not be what he is exactly looking for, but considering the amount of craziness and diversity in that era, I will allow it.

Good luck to all.

Based on the Fanella Rimini introduced in 1950, the Speedster is the pinnacle of development for this somewhat aging platform.

The smooth and strong 3.2 litre six cylinder inline engine, leather interior and state of the art AM radio the Speedster is designed for high speed and long-distance driving, a good an reliable Grand Tourer. 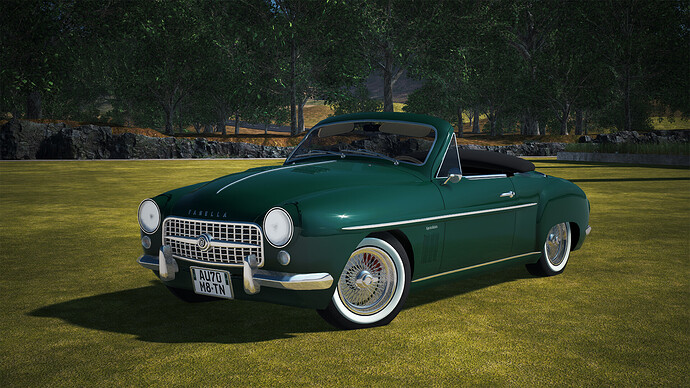 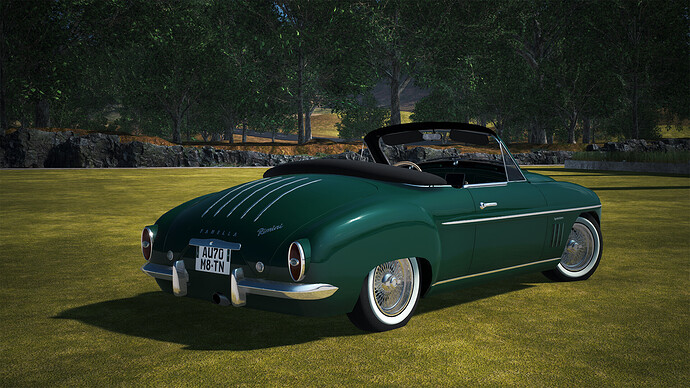 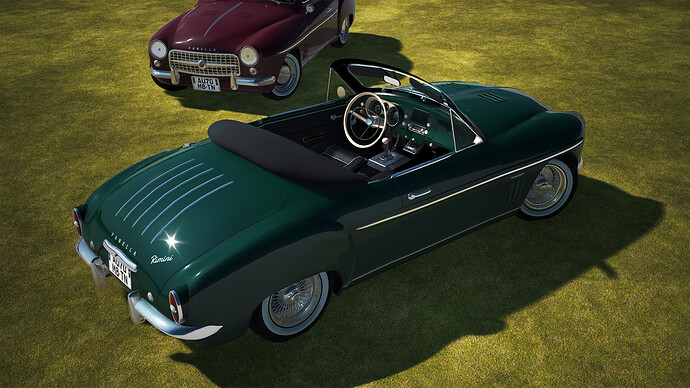 The FGT, a small, nimble and quick little car shed-built by the very best here at Fairburn; Feel the smooth but responsive six-cylinder under your feet and probably all over due to the vibrations.

A relatively Premium but lightweight interior is fitted accompanied by an easy-to-use AM radio. 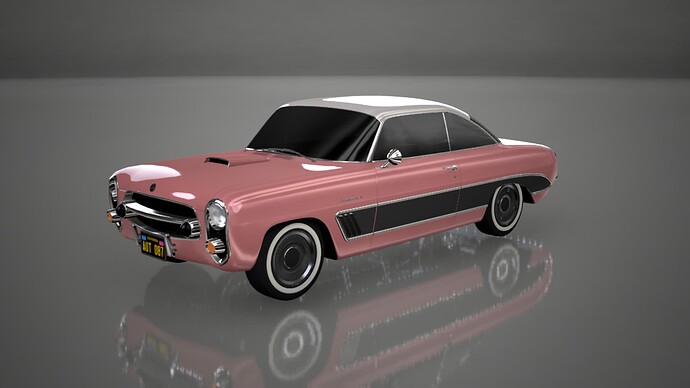 Armor Motors had made a name for themselves building small, reliable (if a bit stodgy looking) vehicles for an American market flooded with increasingly giant offerings. But to commemorate Armor’s first V8 engine, execs wanted a flashy coupe to help grab people’s attention. 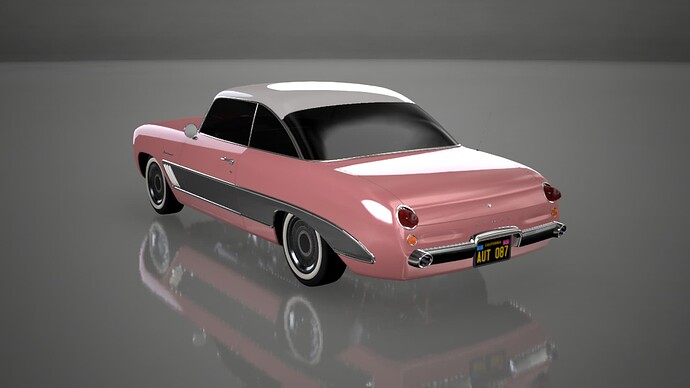 Built on the smaller Highland chassis, wheelbase was still set at 106 inches. Underpinnings were stock Highland parts, but a little extra care was taken with the assembly. 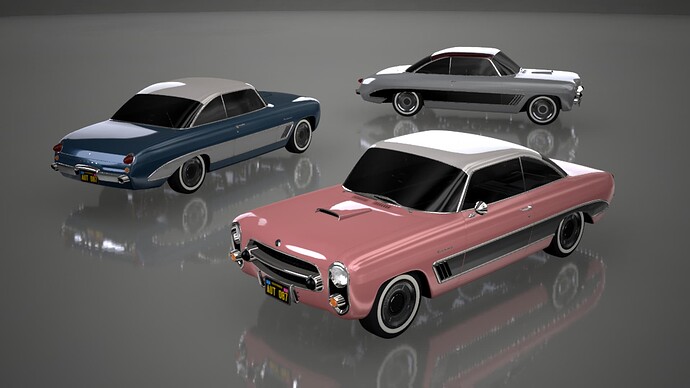 What the Sunburst may have lacked in technical advancement, it more than made up for in color choice. Available in a wide array of triple-tone paint schemes, customers could feasibly order a Sunburst that no one else would have.

With many challenges coming to an end this week, you have an extra few days next week to start, reuse or put the final touches on your JOC2 car.

Very much thanks for that! 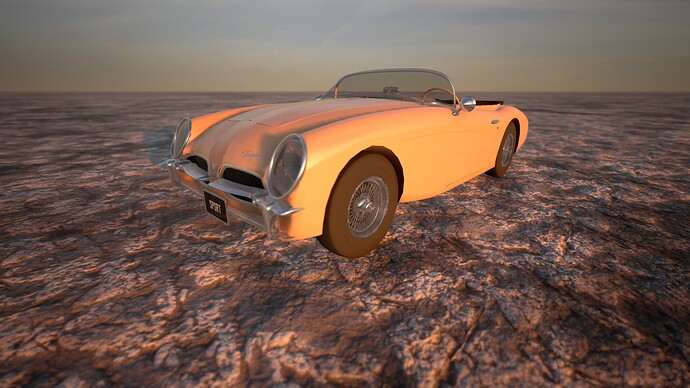 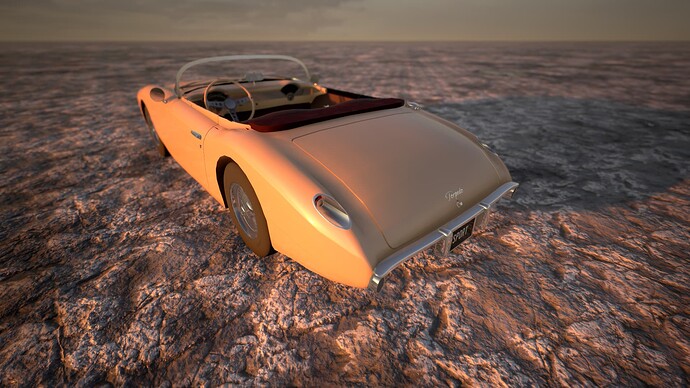 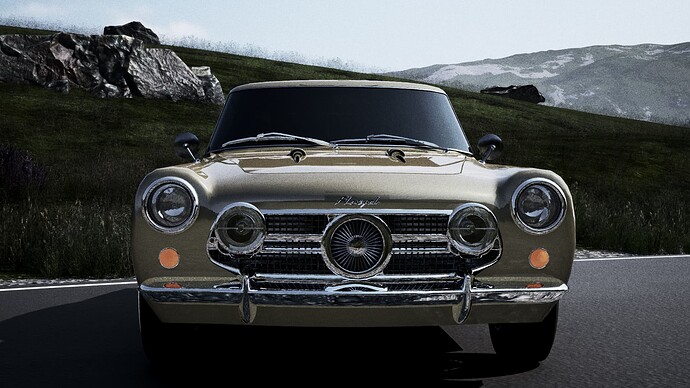 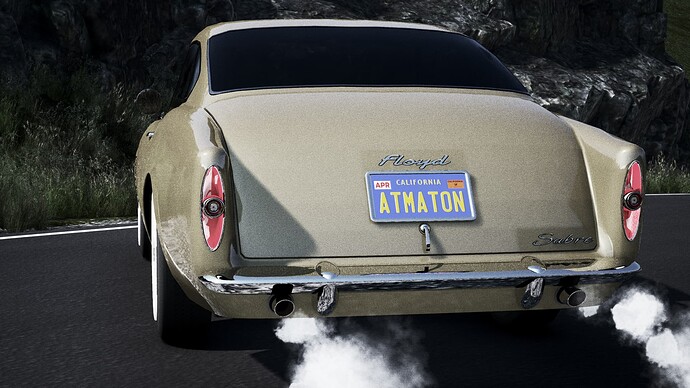 A special vehicle for special people, FMC leverages its aeronautical roots to deliver an aluminum-skinned fastback with style and poise. 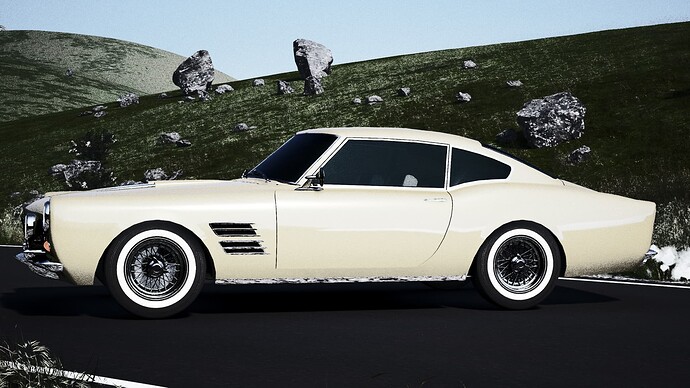 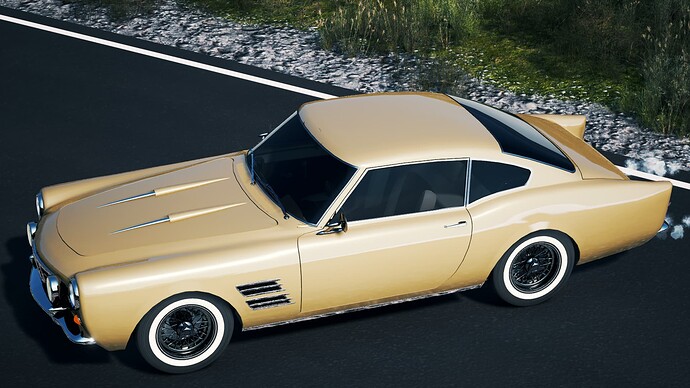 The Sabre Six is the more reasonable brother to the all-out Sabre Twelve, and in fact its engine is a half-cast of the same engine. Sporting 2.8L with an overhead cam head and optimized flow, it produces 151HP and pairs with a 4-speed manual transmission with a clutched rear differential. 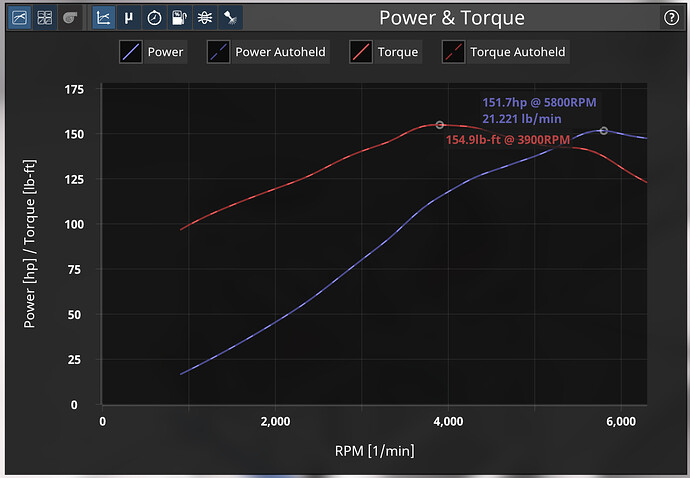 The interior is color-matched to the exterior color, and premium two-tone leather. It’s big enough for a bit of back seat bingo in a pinch, but the bucket front seats are better for long drives and easy cruisin’. 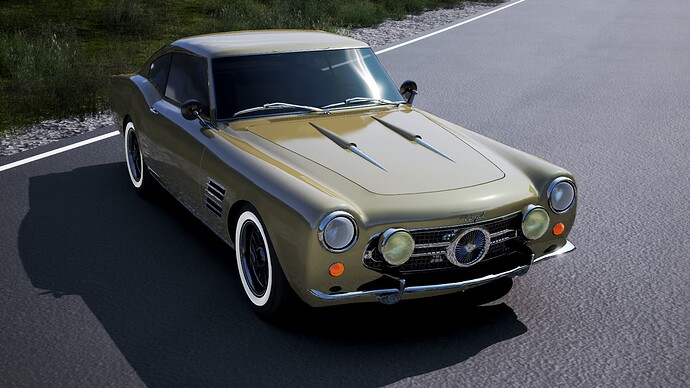 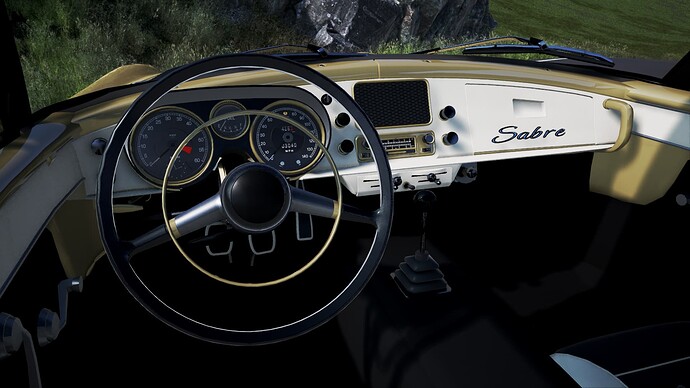 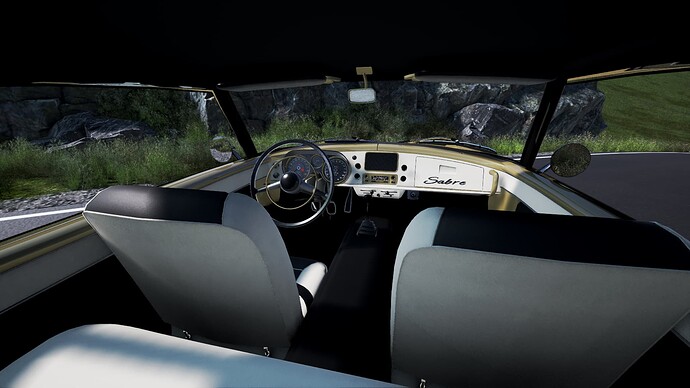 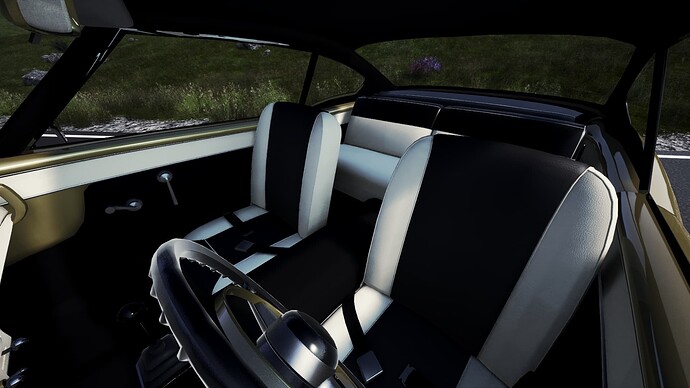 $14,600, buy two and keep one under wraps, because this beauty is an instant collectible.

Hey, that’s perhaps your best looking vehicle this far, you have really stepped up it feels like…I love it!

Because I’m lazy, I’m re-introducing the… 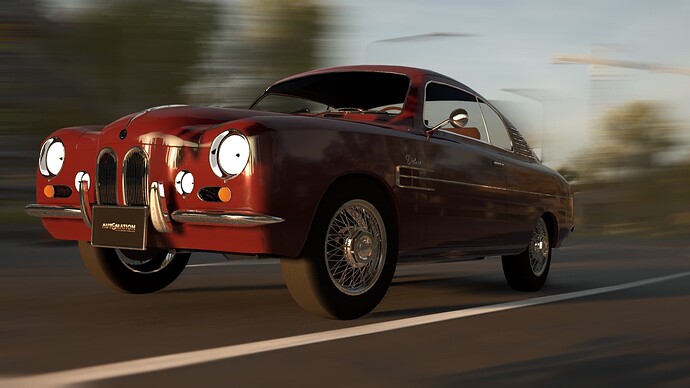 You’re ready for a purchase? Well, come on down to your nearest Mons/Collis dealership, and choose one of the many premium colour options available. 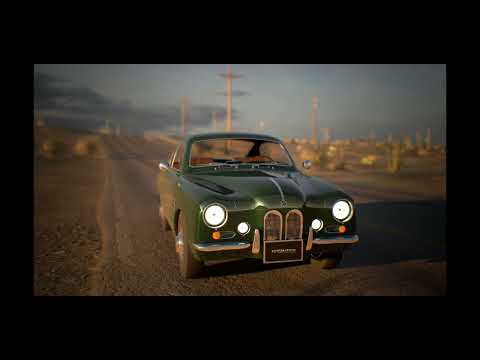 Still time to launch automation and start building a car if you want to join the JOC2 fun… if you haven’t started already - it’s a good time with the lull in competitions right now and everyone waiting on ODC results. 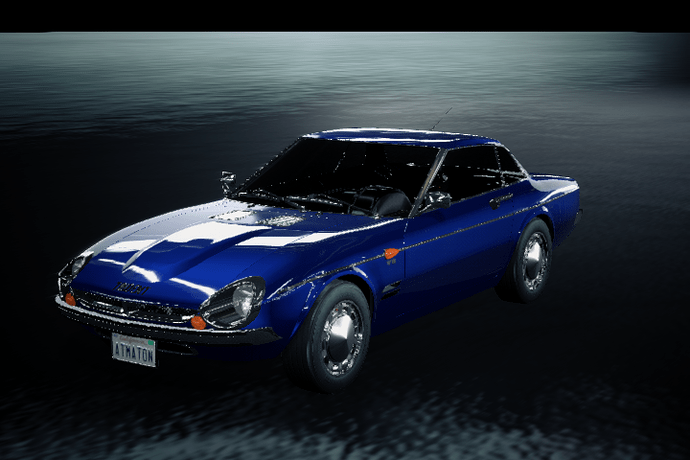 Built by Specialists, For those who want more out of a car.
Visit your Local PTMC Dealer to Find out more.

Driving on the Edge 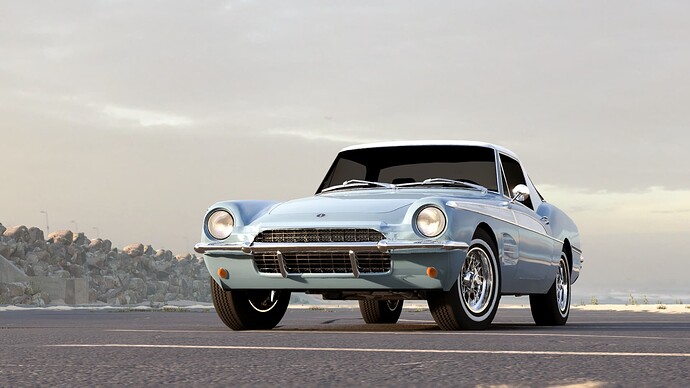 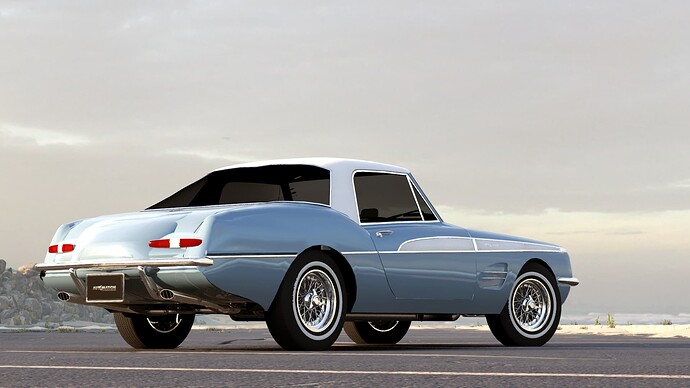 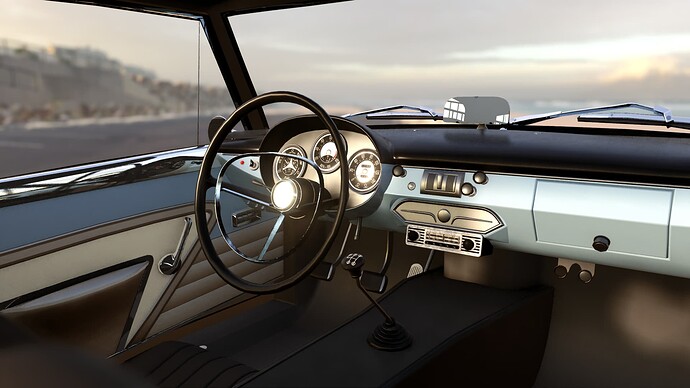 In the post-war period, TURBOL offered road-going versions of their racers to the wealthy few that could afford the hardcore, thoroughbred machines. However, thanks to exposure to British sports cars overseas during the war, young American buyers showed interest in light, nimble, yet affordable sports cars; the expensive Turból machines far out of reach for typical ex-GIs.

Seeing the new interest in sporty European machinery, TURBOL rebranded as the more continental sounding Turból, and hastily worked on creating a more affordable sports car. The project would come to fruition with the 1955 introduction of the Turból Caelus.

To keep costs low, the Caelus used the ladder frame of a UK-market Stellar passenger car as a basis, which gave the engineers a relatively compact and light platform that could be cheaply mass produced, while also accommodating both the 2 seat and 4 seat variants planned. The British-designed frame was reworked with sporting touches by Turból’s engineers back home in CT, incorporating independent rear suspension and rack and pinion steering from their more exotic parts bin. Power came from the cheap, mass-produced 135 gross hp, 239ci V8 and 3 speed manual found in US-market Stellar vehicles. Despite its incredibly lazy nature, the engine motivated the Caelus to sprint to 60 in under 11.5 seconds and to nearly 110 mph flat out.