Based on an idea by @BannedByAndroid

As we all know, people buy, own and sell cars every day (since the automobile was a thing) and each of them has a story to tell whether the experience on owning a car looks like.

With this idea, this is a mix of a personal story + CSR, which means that each round will have a different set of vehicle buying rules, with one twist: its all about a certain person, wants to buy a car within his/her life.

I thought that since some people seemed to like this idea, I could as well host the pilot round. I had thought out a ruleset but as usual, I thought too much and overcomplicated things so I decided to mainly use Banned’s ruleset, though I have an idea of a couple of additions.

All of this (or if you want to add or remove something) is open for discussion until friday the 28th of may, 10 AM (GMT+2).

PART 1A
FARNHAM, SURREY, ENGLAND
MAY OF 1980
Meet Keith Phillips. 17 years old and obsessed with the 50s and early 60s culture as it was portrayed in the movie American Graffiti. With that in mind, he wants his first car to be an extension of his personality. He is very much into the custom and hot rod culture going on in the UK at the moment (which, ehm, was a little bit different and sometimes weird, OOC info), and also the bass player in the (at least at the moment far from famous, to say the least, but grandma has pretended to like what they are doing) rockabilly band “Howlin’ Coyotes” he has together with his friends. With that said, his dream car is at least at this time a 1957 Chevy Bel Air convertible. So probably that is what he well be getting, right?

So, what he is looking for is something much more economical, that still has a style that would not make him laughing stock. Something that maybe could be made to look cooler with some small tweaks (though he is looking into a stock vehicle, he wants to do any modifications himself) since he has read a lot of motoring magazines and been inspired by the custom cars there. Something that would not be shameful in front of the…ehm, girls. Maybe not the most PC standpoint, but that does not take away the fact that it is what most 17 year old boys think of most of the time and it does not matter that the girls themselves are not as faschinated about their shitboxes as 17 year old boys think, because in their head it is the truth, haha. Something that would fit him and be a nice extension of his personality. That does not mean that it has to look like a shrunken 50s land barge (in fact, it can as well end up as silly in his eyes if it tries too hard), but it is still worth keeping in mind what he likes.

Style - see above
Purchase price - yes, there is a limit but the lower the better since money is tight.
Fuel economy, service costs - being able to afford to run the thing is also a priority.

Comfort, driveability, sportiness - This is going to be a daily driver and should also be pleasant as one. Should not either bounce, spin out or bore you to death.
Reliability - He does not want to spend the few pounds he have on a lemon that makes his life miserable.

Practicality, safety - He is too young to think about such boring sensible things yet, but on the other hand, if it is a tie between two cars otherwise, being better in those areas still might be the dealbreaker.

YEAR, CAR TRIM: 1946-1970
YEAR, CAR MODEL, ENGINE FAMILY, ENGINE VARIANT: Car trim year or older
NAMING CONVENTION: Car model/trim: JOC1A-yourname / Make and model. Engine family/variant: JOC1A-yourname/ Name of engine
MAXIMUM PRICE: $12000 AMU (yes, this is used cars but old enough to have lost so much value that I don’t bother to have any used car calculations, they probably will have lost a similar amount anyway)
MAXIMUM ENGINE ET: 70
MAXIMUM TRIM ET: 70
FUEL: Regular leaded
INTERIORS: Not needed and won’t be judged, they were never exciting in cheap cars from the era anyway
REALISM: Unrealistic engineering or styling might result in a bin, that includes, but is not limited to, race parts, semi slick tyres etc.
ADVANCED TRIM SETTINGS: Allowed for resizing transmission tunnel to make a better interior.

SUBMISSIONS CLOSE: Friday the 10th of june, 5 PM (GMT+2). PM me the .car-file and put an ad/description in the thread before that.

Also, sorry if this is too unrealistic in some way, but I didn’t want to do yet ANOTHER Swedish round so this is kind of outside my comfort zone. 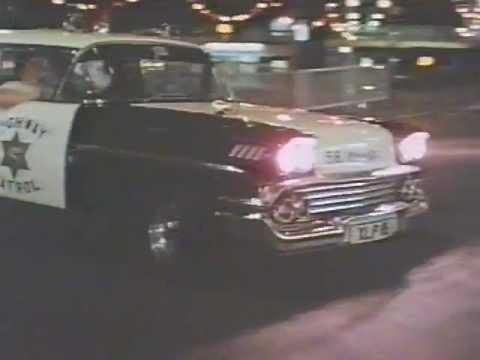 Here is a video that could serve as a little inspiration.

What about seat count and arrangement? Can he get away with owning a 2-seater, or does he need more than just a pair of full-size seats in the front row?

Young, wild and free, and for…ehm…teen activities, there is always a way if there is a will, so I’d say that a 2-seater is enough. With that said, if we end up with a close tie between two cars, one of them having back seats won’t be a drawback.

-snerk- Somehow I feel oddly called out on this. Probably because of this. (Bit of a read, car’s not lore friendly, the reference is near the end.)

Might give this a try, even if I know nothing about British cars…

Well, it’s not stated that it needs to be british either, so…

I think the ET cap could be raised somewhat. After all, some cars IRL did come with V6s between 1960 and 1970 (Like the Taunus and Essex units) and by this point even some of those cars would be depreciated enough to buy

You may have a point there. True, we’re talking shitboxes but on the other hand, if someone manages to squeeze a less shitty car into the pricepoint and also manages to make it somewhat economical to run it might be tempting for him. I guess I’ll try to build a test engine later to decide…

Don’t know why I wrote “custom vans” in the magazine part. Corrected to custom cars. Including, but not limited to vans.

So, I raised the engine ET to 70 to allow for more exciting configurations.
Also, what are your thoughts on tyres? I am leaning towards to only allow crossplies which might be a bit backwards, but…

In 1980, a 10+ year old car would probably not have its original tyres. Most likely is that any car would have radials retrofitted. BUT…

Automation stats favour radials - which is in order, they do improve driving dynamics a lot. But what you can’t do is to fit radials on an old car in Automation. Hence, it feels a bit unfair that older cars should be punished for tyre technology when they probably would have more or less the same tyres as a slightly newer car.

The only remaining choice is to only allow crossplies to even things out - and that would also have been the most likely equipment on any car in this class when new, even in 1970. Maybe not so accurate for the round in itself, but still…

What’s your opinion on that?

I wouldn’t fit cross Plies to every car, just let people use whatever tyre type. More than likely not that many people will make an early 50’s car. When does radial unlock?

OK, might have been me overthinking things as usual then.

Are East Bloc and Soviet cars allowed, and how does he view them?

Nationality does not matter, it’s how the car looks and performs that is important, as usual in Automation challenges if nothing else is stated.

I love the idea of this challenge, I’m in!

Rules that has not been subject for discussion until now are nailed.

I really enjoyed the spirit of this one.

These Kestrels came in all sorts of configurations and interesting color combinations. This one is is painted in metallic blue called "Wolf. You know, it has been said Elvis’ favorite color was Blue, inferenced by how many songs referenced the color. Some argue it was pink and black, since his performances were often in those colors…but I digress. 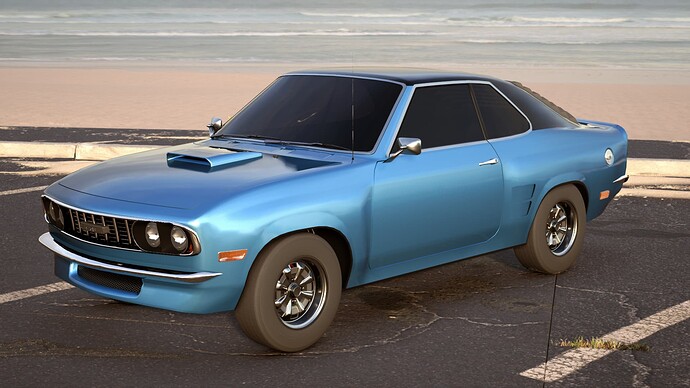 Photo318_1,920-1,0801920×1080 165 KB
This one packs the smallest engine they come with, but its still a Overhead Cam V6 so it at least sounds sporty. Sized 1.9L, it makes 91HP, and 102 lb/ft TQ. This would be disappointing except for the fact that, true to its name of being a small bird, it is extremely light at under 2300lbs, and it comes with a fully-independent suspension and disc front brakes, so it has great bones for future upgrades. 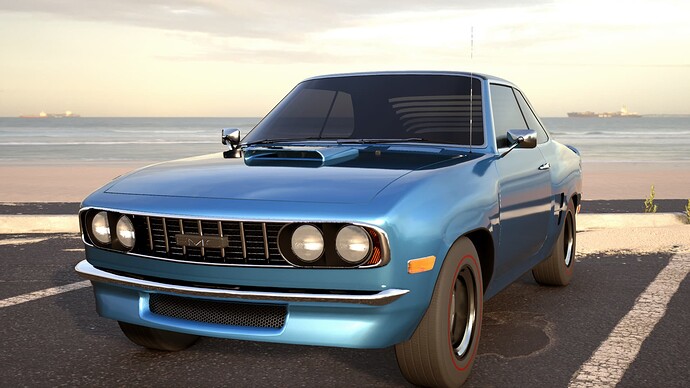 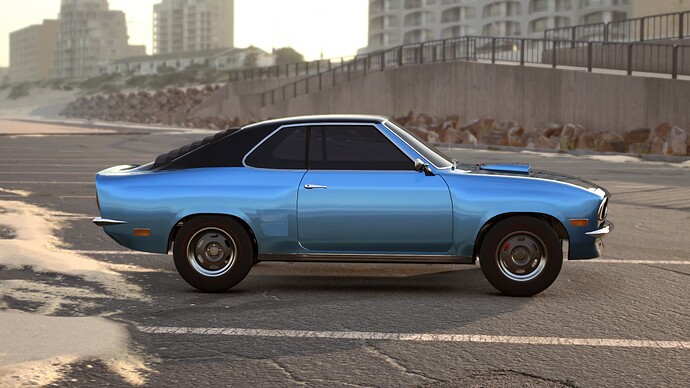 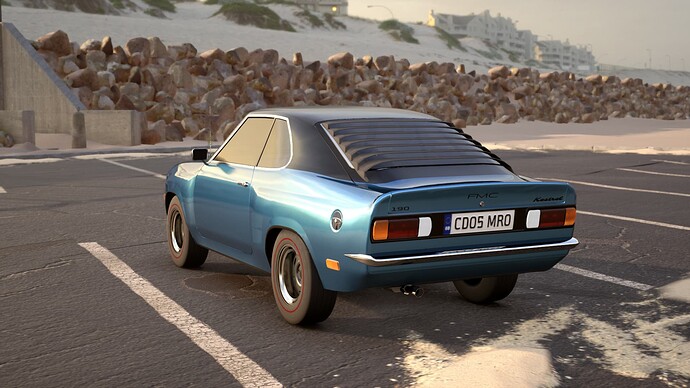 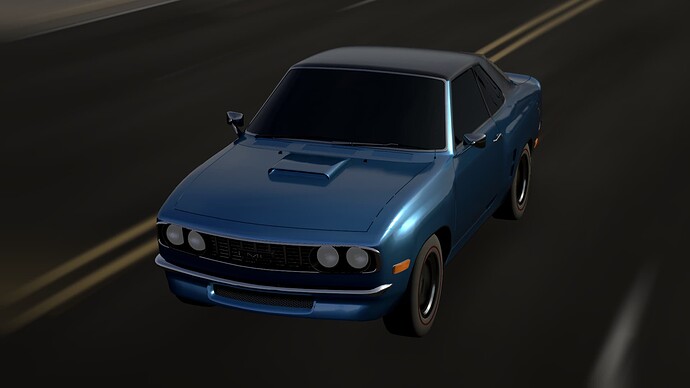 Reminder: A little over a week until deadline.

am i allowed to submit a vehicle from another challenge in a similar era?? i am sorry for this question.

As long as it fulfills the rules, I don’t care if it has been in 200 different challenges before, just reuse it if you want to.