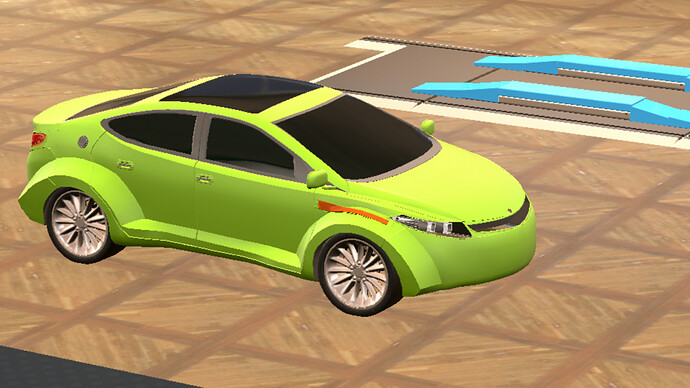 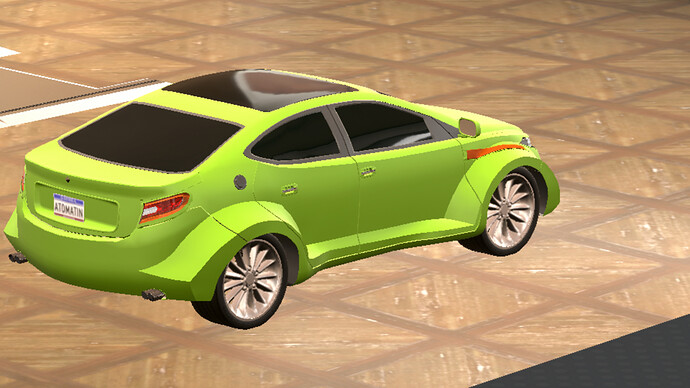 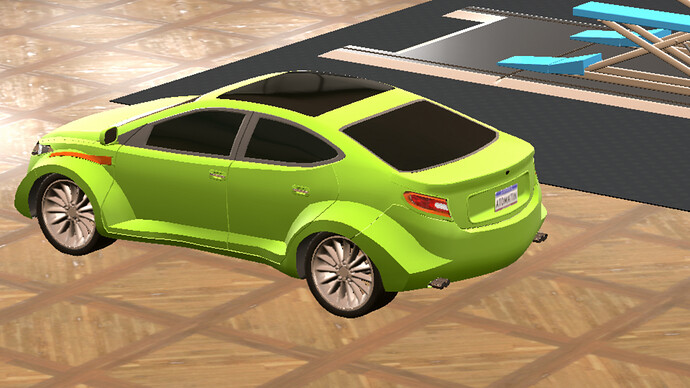 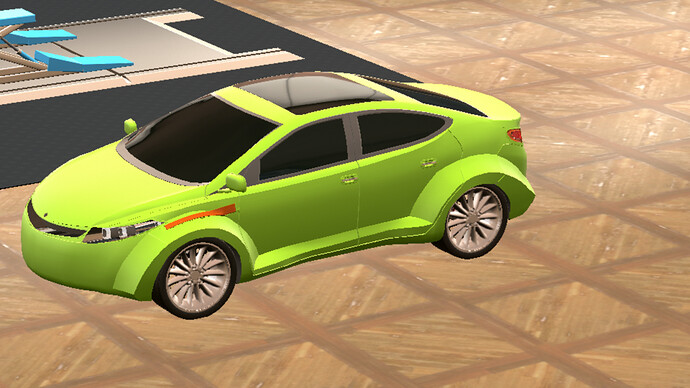 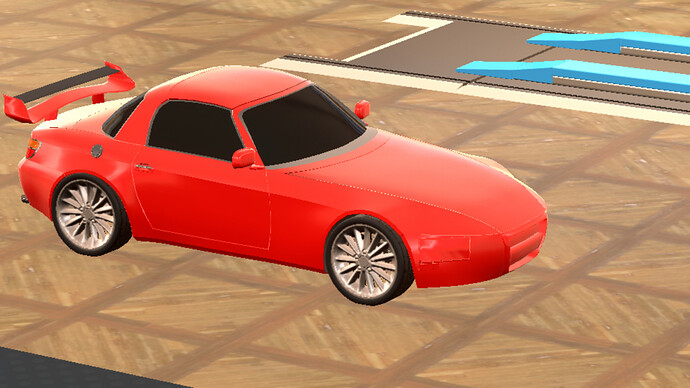 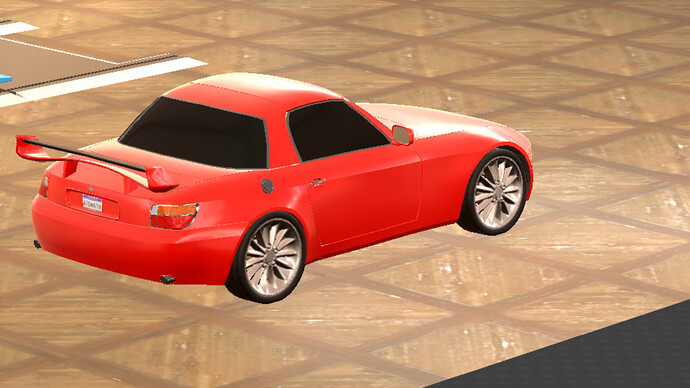 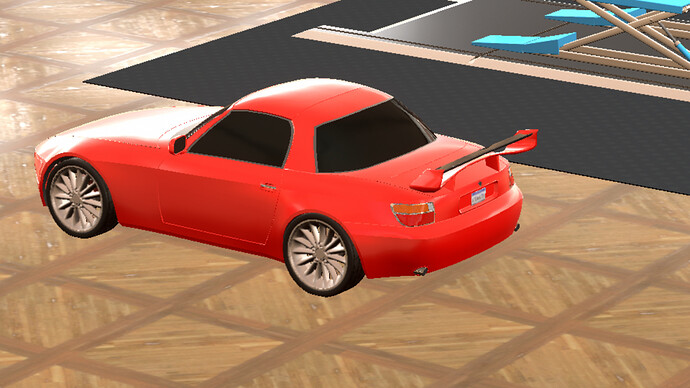 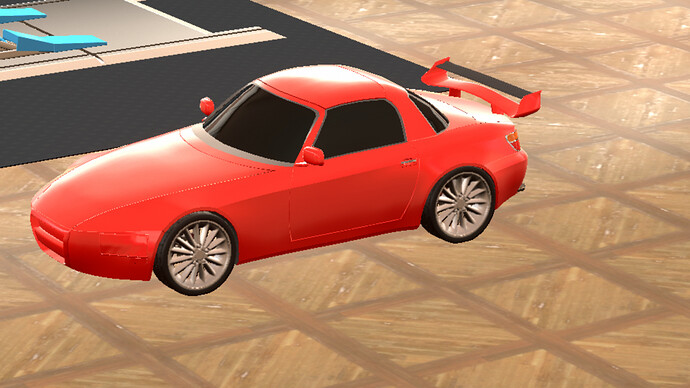 At one minute and 27.18 seconds around the Top Gear test track, it’s fun in the sun. 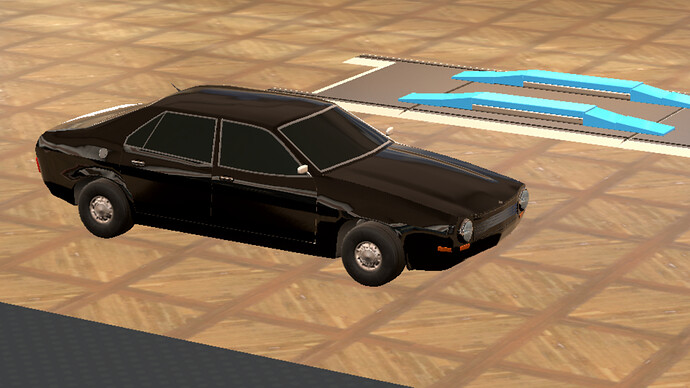 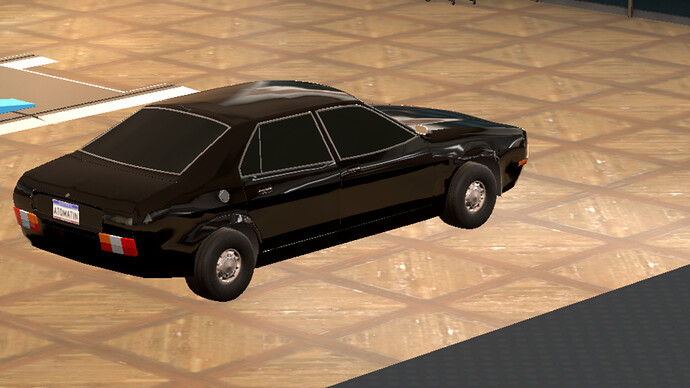 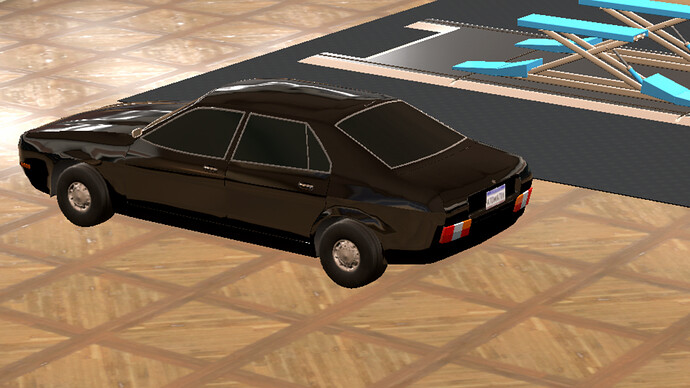 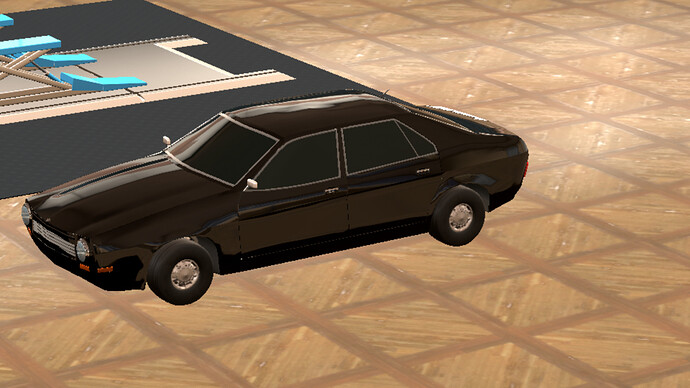 Handmade seats, a refrigerator, automatically opening and closing doors…Does your car have all three? 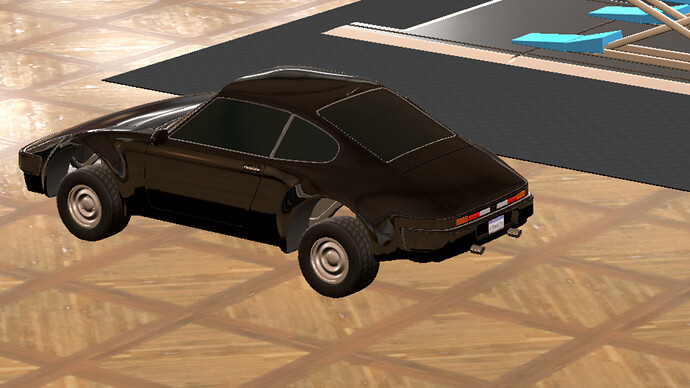 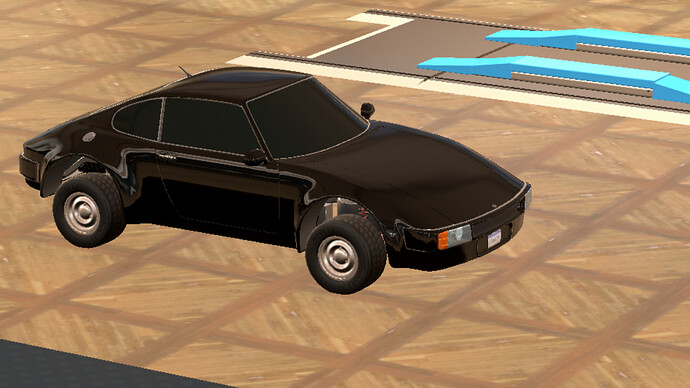 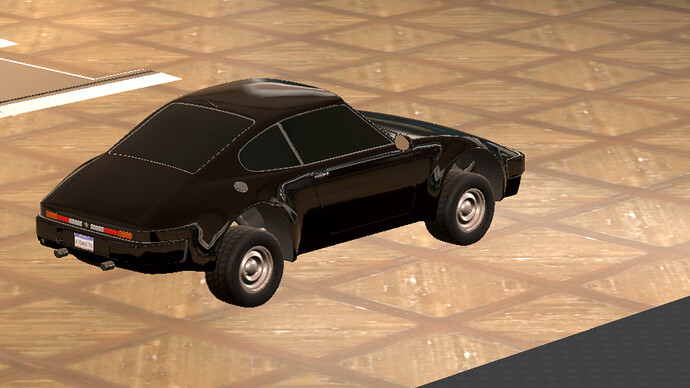 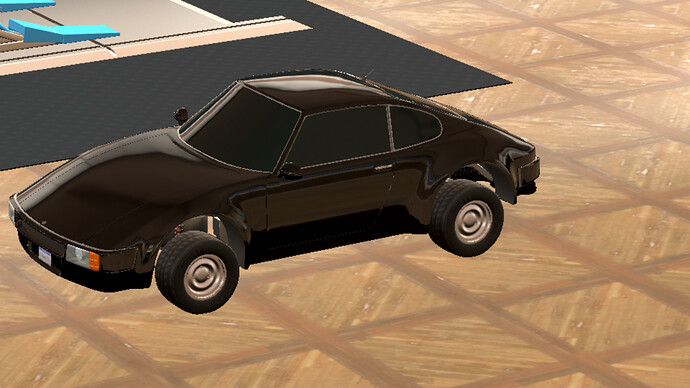 Where does one minute and 24.13 seconds around the Top Gear test track get you?

What type of car is this intended to be? By that I mean, what market is it intended for, and are there any real life examples that you were basing this car off?

Why does your car have that?

No one expects a first ever car on Automation to be good, there’s at least that. You should look at real life examples and base yourself on that for the fixtures and the mechanical choices. Take a look around the forum for other users’ cars. In some threads you can even download them and see how they placed fixtures. Although for that, I’d recommend you install the mods on the Steam Workshop, as some of those are quite extensively used. You don’t need mods to design a realistic looking car though.

Sounds like someone’s internet girlfriend broke up with them today.

Sounds like someone’s internet girlfriend broke up with them today.

What do internet girlfriends have to do with advising to look at real life examples to make your cars look like cars?

Knowing how much Kristina hates the Discourse UI and hasn’t said anything for about 3 years, she may have been replying to a completely different post.

Well it was only a matter of time before aeris got into some drama here.

Anyways, I would just like to say one thing however to certain people - calling obvious beginners ‘noobs’, ‘terrible at designing’ or any variation of those without any suggestions for improvement is very discouraging and only stops people from wanting to improve. This also applies to everyone on Discord who spams :myfirstdesign: as soon as they see a car which hasn’t been fixture spammed 'til death.

I can tell for a fact that no one was an incredible designer from the beginning with no need for criticism. Just because you vomit fixtures over your cars now doesn’t excuse you for being an asshole to newer and less experienced designers. Get off of your throne and offer help to those you can tell need help.

Not directing this to anyone in particular.

Drama aside, the car does have potential as a design, a tip of advice that i commonly do is to just copy IRL cars and then modify them for your own needs. Making car designs entirely on their own is hard, so I think it would be a lot easier for you to just copy designs first, THEN work creative exploration.

For instance, you can copy something like a Civic to get a general idea of how the car type looks, then modify it to really make it your own. I hope I’ve helped you, I know it can be hard to start out in this game!

Technically you could go the other way round too. You can make uniquely wild designs, and then gradually make your designs more and more realistic by looking at real cars of the same period. That way you can better develop trademark shapes you want to have. That’s the way I went, and it seems to be working so far!

But, it is also true (and well known) I am not a huge fan of this UI. hahahaha

The response was just ruuuuuuuuuude, regardless of how much they disliked the car design. Constructive criticism is always expected, but that critique was just simply being a dick. Hence the remark about him being rejected by a fake internet girlfriend. You know, because I can also be RUDE.

Literally all the rest is pointing out why the car is not good and what he can do to improve those issues.

And it is a bad car, technically and in appearance. That is not rude, that is just true. You should follow that up with suggestion to improve, and not all designs should be awe-strikingly good, but there’s no use in applauding it either.

Not bad for a first design. The taillights could be made bigger tbh,

Okay with the… drama now cleaned up, lets get to some real discussion on your design. I’ll just touch on the engineering since everyone else discussed styling (in more or less polite terms). The design choices, are quite frankly, all over the place, which is understandable for a new player just experimenting with different combinations of engineering choices out of curiosity. But from reading the stats, I don’t see a clear goal of what market the car is attempting to participate in.

Here, you get a sense of a rather luxurious car, with this configuration popular among premium/luxury cars meant to be driven by a chauffeur

The dimensions, however, puts it right in the compact segment, something more populated by entry level cars, and not luxury cars (which would be at least mid size, mostly full size)

Frankly, I think that if you were willing to put money into an aluminium frame, you might as well go with full aluminium panels? Don’t really have much to say here, other than aluminium semi-space frame is a construction for premium cars, such as Audis (in fact, this tech was pioneered by the A8 sedan)

FR drivetrain is always fun, would make sense for any premium or luxury car of any size or price range

I guess for the 2000s, the sequential transmission was the next big thing, but usually reserved for high performance vehicles (with Ferrari’s F1 transmission or BMW’s SMG transmission being infamous examples). Assuming this is a sports sedan, this choice makes sense for the highest level of the car.

suspension: double wishbone in the front, pushrod in the rear

The double wishbone up front is

The pushrod in back doesn’t make sense, as that suspension is basically exclusive to supercars, hypercars (and it is derived from the suspension used in F1 race cars). A much superior choice for a premium sports sedan would be a double wishbone or multilink rear, as these suspension types still preserve good handling character, while having far superior comfort, load capacity, less expense (engineering, production and maintenance), and more range of ride heights. Generally pushrods only work on cut-throat performance cars, and a sports sedan could never reach performance of a proper supercar.

chuncc lol, i guess it makes sense for all the luxuries crammed into the car? Although the IRL Hyundai Elantra (which the car’s body is based off of) comes in at a 2900 lbs (don’t know if thats a good benchmark so take this with a grain of salt)

Sounds cool, although those examples I cited were pulling 7k to 8k. Although

Sounds nice, I do love my boxers personally. AlSi block makes good sense for a new engine from the 2000s, used in sportier cars. 2.6 litres is a bit small compared to the 3.0 + litres of the previously cited examples, but you made up for that with a turbo. Although, I’d expect a 2.6 litre to be capable of higher RPM than 6700

Not gonna lie here, this ain’t it chief. DaOHC is pretty useless tech in the 2000s, its something you’re more likely to see in much older small engines instead. Any self respecting sports car of the 1990s or 2000s would be sporting dual cams, 4 valve per cylinder (like nearly all modern cars, great for a broad power range - adding VVL would further broaden the powerband and help a bit with efficiency), or 5 valve per cylinder (better for pursuing peaky high RPM power, found in Audi sports sedans from the early 2000s actually)

7.16% efficiency is honestly piss poor, to be expected of giant carbureted engines from the 50’s or 60’s. Its especially bad considering you are using GDI fuel system and 10.4:1 compression. Might have plenty to do with how the cam is setup and how rich the AFR is

Edit: forgot to include this, but I’d expect about 25 % efficiency for a sporty engine of the 2000s with high comp ratio and direct injection

I hope this actually helps you to improve the engineering of the car instead of just coming off as pointless criticism, as that is my intention. We all had to learn the game ofc, and this community taught me plenty

@Private_Miros This is what constructive criticism looks like. Study it. Learn it. Be better at it. I wonder what you would say about my cars?

If someone is interested in getting detailed criticism, @balkanski_brat’s is exactly what you want.
However, to many that are convinced that their work is the greatest that’s just a lot of effort that runs off them like water off a duck.

I don’t know what I would say about your cars. Show me, and I’ll tell you. If they aren’t going out of their way to look horrible and aren’t a complete mess technically, I’d probably ask you for one to review.

Introducing the new 1995 Kepos Swish SE. At one minute and 27.18 seconds around the Top Gear test track, it’s fun in the sun.

Introducing the 1974 Kepos Hallelujah Limited. Handmade seats, a refrigerator, automatically opening and closing doors…Does your car have all three?