First thing first: I am aware that Linux isn’t officially supported. With that being said, thanks to Proton, the game works almost flawlessly, with the sole exception of the launcher. Even after following the advice given on the ProtonDB page for the game (that is, setting Windows version to WIndows 7 in Wine’s settings and installing the .NET framework), while the launcher does start, I am unable to use mods from the Steam workshop through it.

When launching the game with the launcher, the following error message pops up:

If I subscribe to a mod on the workshop while the launcher is open, these errors start appearing at a rate of about one dialog box per second (all in the same place, but I’ve moved them around for this screenshot) 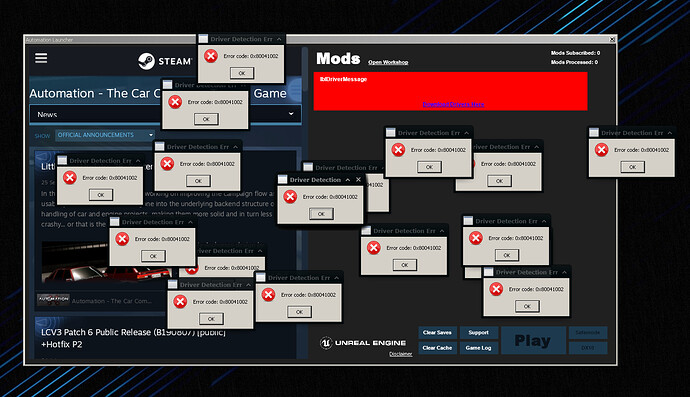 When starting the launcher with at least one subscribed mod from the workshop, this error appears twice for each mod I’m subscribed to:

Likewise, disabling a mod through the launcher yields this error: 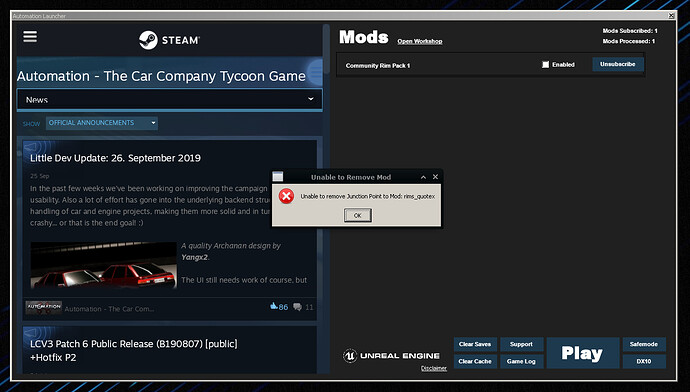 And once I launch the actual game, the mod is predictably nowhere to be found.

EDIT: It’s been pointed out to me that you can copy mods downloaded from the workshop (as I’m writing this, they sit in ~/.local/share/Steam/steamapps/workshop/content/293760/) right into the Automation’s plugins folder (in ~/.local/share/Steam/steamapps/common/Automation/UE421/AutomationGame/Plugins/) as a workaround. Doing this is enough to have the mods working in game and thus having workshop support without needing the launcher.