So far, how do you fare with new LCV4.0 campaign?

I am asking because I dont have much success so far.

With previous version, was managing to reach enddate easy peasy

(not that these are tremendous high scores: but I was able to do as I please and it worked well enough to be sustainable)

So far, even in casual I crash my company early enough, or I only manage to get one model that find some relative, and short-lived, success

So I cannot even pinpoint what I am doing wrong, there must be alot of them.

Hence the question, how do you fare. If you do ok, what do you pay attention to know that your ignored in the past?

(To the devs: thanks for the good work done!)

Some example, making a very cheap car for Archana, medium difficulty.
I get decent rating for a family budget car: 264.

Previously, that worked. Because it could actually be sold to Family? Actually, this car as it is should be right for the family market.

But the car does not show up in this demographic. No price or indicator, despite the green color that should mean something good. 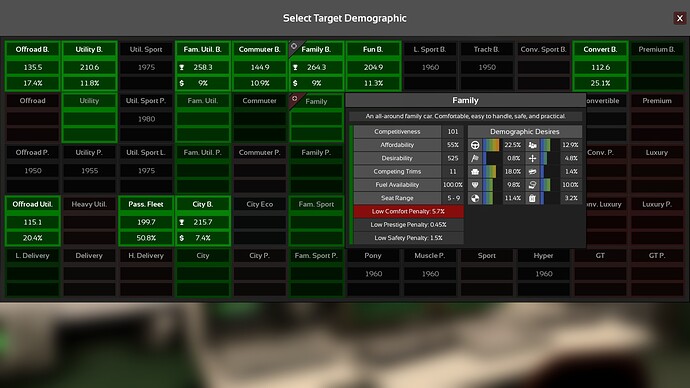 If I pick Family as target, instead of Family Budget, then it show a 100 value. But they do not want it. Lack of confort? Were only at 55% affordability; what else can they expect?

So I try something else and rehandle the car targetting Family, remove any negative quality settings. But I fail to make it very competitive.
Plus I am forced to increase top speed artificially to 150 kmh, getting better affordability (?) while degrading considerably both top speed and 0 to 100 kmh (106 kmh + 91.5s instead of 117 kmh and 60s). I checked the stats in the details, it looks like it takes into account the top speed as if it was a real top speed, while in another thread I was taught

it is not a real top speed but a way to completement gear ratios adjustements.

I think the top speed taked into account should be the one from the stats; actually both the real stats test top speed and 0 to 100 (for cars that go to 100) should be taken into account
Here, it really give better stats to a worse vehicule. And I often found myself in this situation, which seems a bit an exploit. I know car top speed given by manufacturer are sometimes optimistic, but in this case, 150 is not even optimistic, it is a setup that actually degrade the car real top speed).

After redesign and try my best to match expectations for family, I am at 126 + 48% for affordability. Not great either. 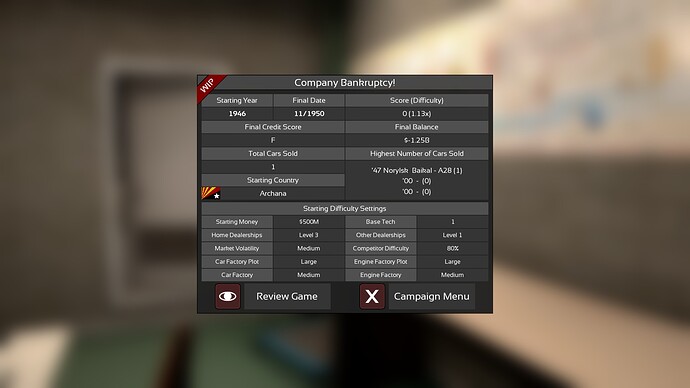 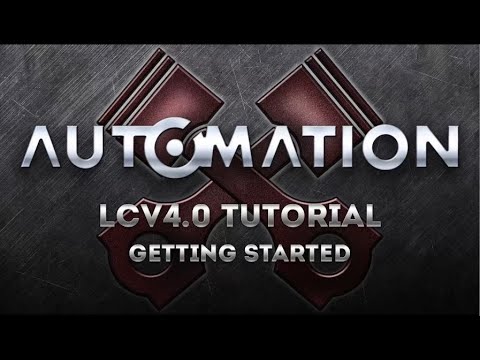 Competitors are quite a bit stronger now because they have learned to better optimize their cars. Other than that there is a bit more complexity here and there that makes it more challenging for sure.

Budget demographics, especially at the start of the campaign are NOT supposed to be catered to, because that is, as you have found out, impossible while turning a profit, so don’t.

They are second hand buyers.

It is more challenging, I’ll have to rethink a few things

Regarding the “top speed” issue I was mentioning, is it working as you expect? I noticed on the graph, visible when toying with spacing/toy speed, that the real top speed is actually graphed. Would you not consider using this one in performance stats?

Ok, so shifting the focus to non-budget and carefully taking into account everything, but restarting on Archana / casual difficulty, I end up with 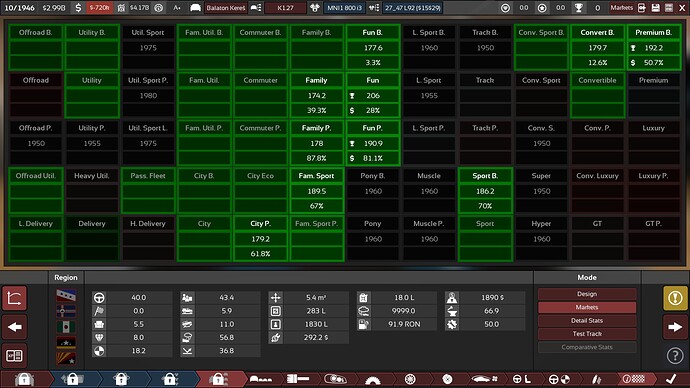 which is not bad in drivability and confort, the two categories that matters there, by comparison to competitors average: 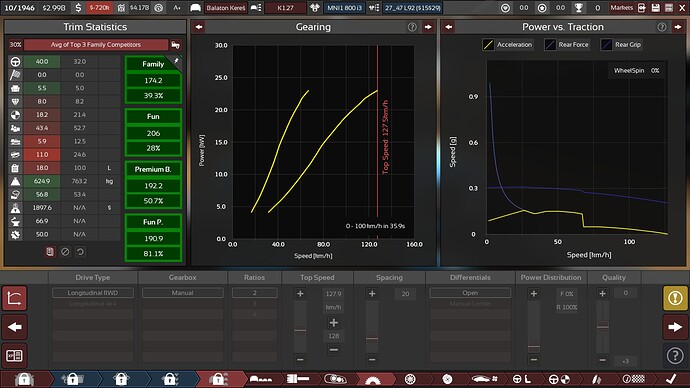 It turns into profit. Even further with a new variant sold later: 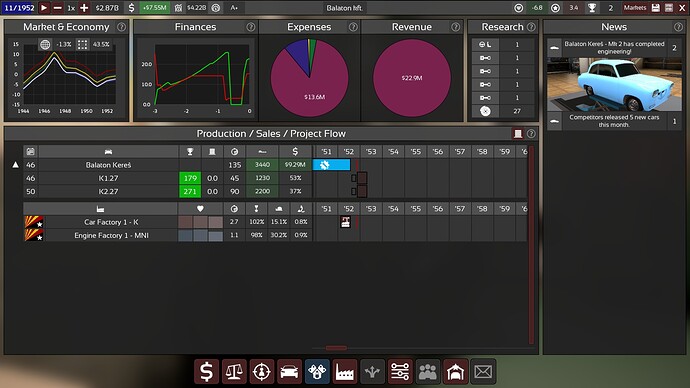 BTW, is there is a way to know exactly how is going to second-hand vehicule market? The interface tell us when a competitor release a vehicule: do we have access about information regarding these besides average stats of the 3 top?