After creating a new campaign and designing the car and engine, it’s impossible to get past the engine factory sign-off screen. It appears the button is disabled. 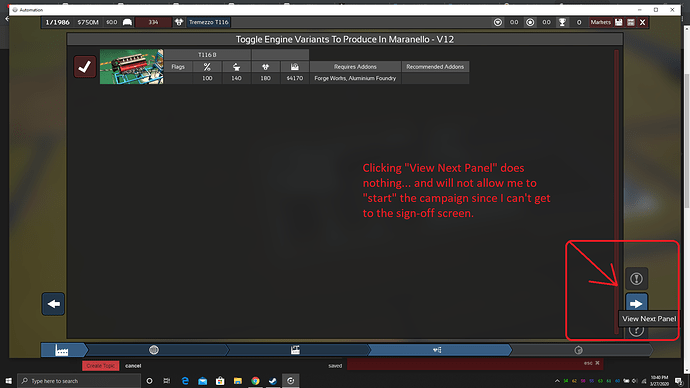 edit: I discovered someone posted a similar error on the Steam discussion board and they pointed out this issue seems to be limited to small engine factories (as what’s in the campaign I attached).

Had the same happen. I figured out that the reason as to why this happens, is that the Iron Foundry requires a medium size factory to exist. So even though you apparently can select it to be built, it actually won’t be, which makes that next panel not work.
You can see this if you have an engine, and try to build a new factory. When buying the plot, the minimum you can buy is the medium sized one, explaining that the Iron Foundry is a necessity, implying that it can’t be built on a small one.

Yes, the iron foundry is what is messing with things

it should require a small factory to be possible to build. We’ll be fixing that asap! Go for the contracted production in the meantime.

Contracted production won’t allow me to select an engine requiring an aluminum foundry either. (as pictured above)

This should now be fixed!

Thanks for the quick work!