Just two days ago, I flew up to San Francisco to pick up my car. 2 days later, and after 10 hours of driving, I’m home with my new beauty! It’s “certified pre-owned”, so an extra year of warranty, fresh Pilot Super Sports, and a full inspection for rust and other defects.

The transmission feels wonderful, the engine pulls very hard (as in comparable to my father’s M4 DCT), and I’m in love with the color! I’ll update this soon with a cold start and maybe more.

It’s not an M2 Competition or CS - those are more expensive and, in the latter case, limited production only - but an M240i is the next best thing; it’s still fast and agile enough, and I like the fact that you bought a manual example - a rarity in a market dominated by all manner of self-shifters.

Wow I really forgot about this thread

This car is the first I’ve ever “owned” (my parents own it by law), the first manual I’ve ever driven, and the 4th car I’ve ever driven. And wow, what a great place to start. I’ll divide this into paragraphs so it’s not a total wall of text.

I’ll talk about driving experience first, since it’s probably going to be the most interesting part. It’s amazing. People complain about steering feel in all modern bimmers, especially the sporty ones, but I disagree. Despite there being less feel through the wheel than my father’s Porsche ('06 911 C2S), it’s still plenty communicative, plenty moreso than my father’s other car, a BMW M4. That car drags the wheel towards the center strongly, creating a feeling of artificial heaviness. No such issue on the 240, it’s lighter than the M4 but feels much better than the M4. Another big part of the driving experience I find interesting is the engine/acceleration. Despite about a 100hp power deficit, my car feels quicker than the M4. My butt dyno is likely deceiving me, due to the feeling of shifting vs. pulling a paddle, but overall I find my car more fun and enjoyable to drive. I should also mention the sound is nice, though definitely muffled, and an exhaust is near the top of my mod list once I have the means. As far as the trans, I’ve never driven another manual, but the shifter feels very direct and slots into gear nicely, and the clutch is usable in traffic. (Sidenote, I installed an M Performance shift knob about a month ago, which has slightly shorter throws and allows for quicker shifts purely due to ergonomics.)

Okay time to divide this into another category: daily driving. it’s solid, not perfectly comfortable but I’m glad to live with it. This is the 4th BMW my family has had with the iDrive 4.0 system, so I can navigate it perfectly and I’m very comfortable with it. The standard, non-Harman-Kardon speakers are adequate and pair to my phone, as well as having satellite radio for when the boomer parents want to listen to CNN. Apart from the infotainment, the rest of the interior is comfy while being relatively un-luxurious. The black leather is nice but tough, ideal for when I go to the gym so it doesn’t absorb much of the… nastiness. I also installed the aforementioned M Performance shifter and handbrake, which are wrapped in a combo of alcantara and carbon fiber weave, allowing for a strong grip and beautiful aesthetics.

On to the exterior, the color is one of my favorite offered on BMW’s today, which was tough to find. A manual’s rare enough on these, but then filtering it down to a manual in a specific color makes it rarer. The M Sport bodykit, standard on the M240i, adds a very necessary aggression to the styling and adds a direct channel from the front bumper to the brakes. (I’ll take a pic to show what I mean.) The audi-like grey mirrors are my biggest issue with the exterior, and I’d prefer either gloss black or carbon for them, which I’ll get to… eventually. The grilles with chrome surround and black slats actually look pretty good, but I ordered M2-style black/black with dual slats which should arrive tomorrow.

I should mention my biggest issue with the car: the open diff. Now I should’ve addressed this in driving experience, but I wanted to keep it a bit shorter, and this is my only negative point on the driving experience. Despite the eLSD, which claims to brake the inside wheel and simulate a true LSD, it doesn’t do its job too well at low speed. Above 30 or so, if you gun it around a sweeping turn, the inside wheel grips perfectly and you can feel the programming doing its job. But if you’re trying to slide it across an intersection when you’re making a left turn and there’s no one around, prepare for disappointment. It’s a mess of one-tire fires, and I should add this seems to apply to launches, though I can’t tell from the inside. 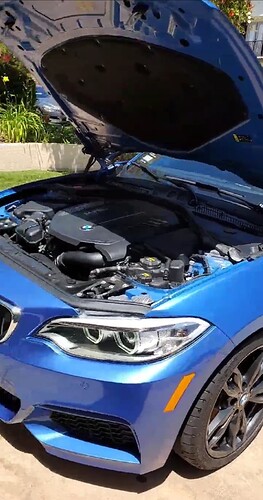 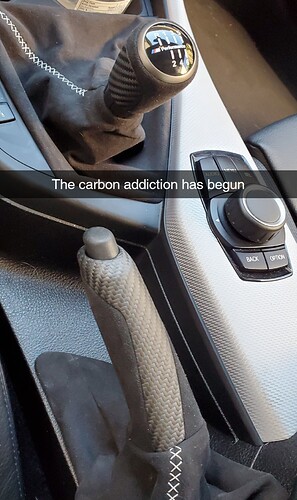 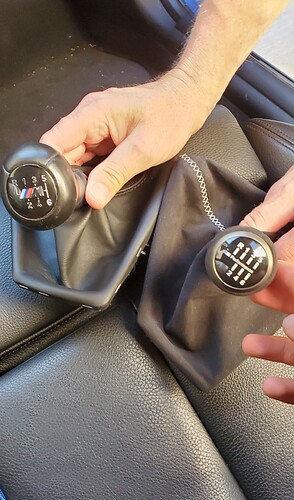 top left: yeah that’s as low-res as you think.
top right: the M Perf shift knob and handbrake.
bottom left: the brake cooling vent thing I mentioned. It seems out of place when I take such a close-up pic, but it looks interesting from a distance (and is more subtle)
bottom right: the M Perf shifter compared to the standard shifter.