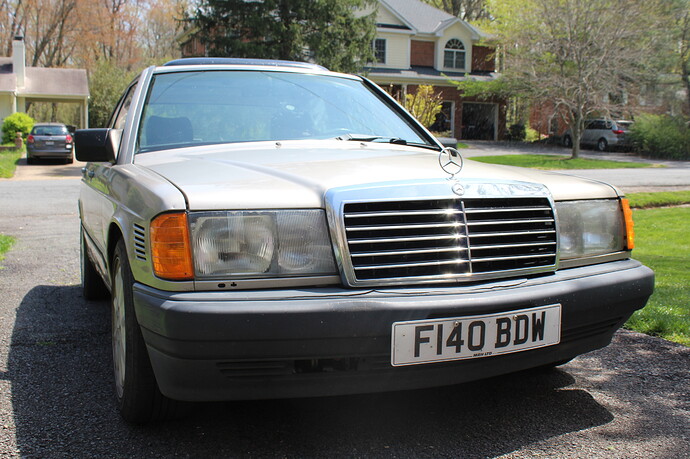 Ok, what do I think about it? Pretty good! If I could rate the car overall I’d say 8/10 right now. It definitely has some issues (see below) and that is mostly body damage and wear. some hail damage on the roof, trunk, and hood and has some rust spots but nothing major. The suspension is stiff but it keeps to the road well. The 5 speed is completely different from the 6 speed in the Jetta. The Jetta has a pretty high 1st gear but the 190D had an average 1st gear originally and now with the slightly larger wheels and especially the rear differential the 1st in it is low. I haven’t stalled it (edit, I forgot I stalled it twice yesterday but not today) but I have made it jump a bit quite a few times as I am used to being able to go around parking lots in 1st, not 2nd. It will take some getting used to but already I have gotten a lot better with it so just give it a week. The steering is amazing! It has more feedback then the Jetta and is reasonably tight but not too much. The turning radius is great too. The brakes are spot on, it can stop on a dime and I haven’t even gone over 1/2 on the brake pedal yet. The interior is for the most part nice but some of it is showing its age, especially the seats. All around it’s pretty good.

Weirdness, the HVAC. So, If you look in the picture dump above you will see a picture of what looks like a plumbing valve. That’s because it is a plumbing valve. This is a pretty ghetto HVAC fix that the car has. It works but you can only choose one at a time with that valve. Open for heat and closed for AC. It works but it seems to have messed with the glow plugs as they stay on whenever any part of the HVAC is running, which is an issue. The switch next to the shifter is also for turning on the blower fans in the front for the AC. That is on the list for getting fixed, speaking of such. The list for getting things fixed.

I am sure I will find more to get fixed soon enough.

Here are some fun videos of its startup and wiper, say hi to my mom and dad in the wiper video.

Big shout out to @cpufreak101 for finding me a bunch of maintenance information and guides for the car. it really helps a lot.

Well that is all for now. it is now my daily an my money hole. I will definitely enjoy driving it around town and I hope yous guys enjoy my adventures with it.

Is that valve in one of the coolant lines heading to the heater core?

I’m not sure but I would guess that’s what it is in, or something similar.

My guess would be the car has a bad blend door, either the physical door itself or the actuator. Since coolant is normally always flowing through the heater core, that valve would be a fix around that. If you’re looking for the “proper” fix, then it looks like the blend door is where you need to look.