Metropolitan Motors.Was founded in Santiago de Chile by Ernesto Montana in 1969.
Metropolitan Motors relies on the cheapness on local production versus exports, using this to keep themselves competitive in the market. Since Metropolitan Motors is one of the few local car companies in Chile, the company has designed various vehicles, comprising various uses.The company’s main production is focused on economy and sport cars.

Don’t be afraid to ask for special things from the company. We can offer pictures, custom built cars and engines, car optimization help and much more.

Tallerino-The first car
The first car designed and built by the company, built in 1969. The car was designed for track use, since Metropolitan Motors was aiming to use this car to attract attention, hoping that the high performance would attract customers and racing teams.
Car Overview
The Tallerino was an engineering success. High speeds mixed with reliability and a reasonable cost made the Tallerino a successful first attempt, attracting investors into the company.
The car relied on a longitudinal RWD and a 235.35 HP V8.The interior was something typical of a race car, featuring 2 standard seats with a basic AM radio.
The car’s limited production and the horrible emissions (For some reason, the engineers said it had infinite emissions) removed it’s potential as a commercial car. The below average comfort also made the car unable to join into the luxury or supercar markets. So the Tallerino was mainly used as a Motorsport car. 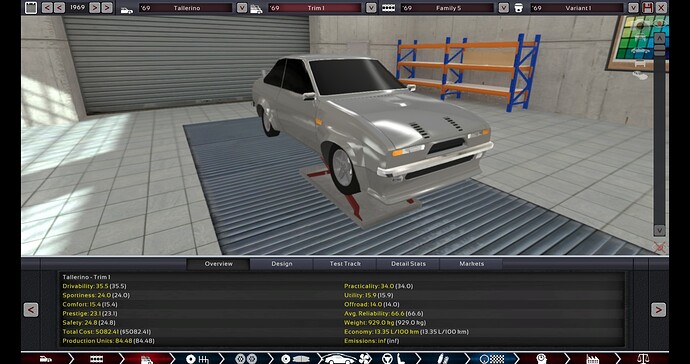 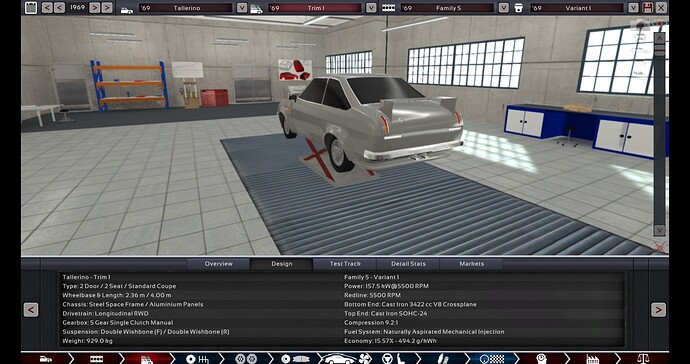 Good first car. Perhaps the spoiler is a little out of place in 1969 but that’s a great drivability score for 1969!

Confible I-Starter of the mass production.
The Confible was the first mass produced car by Metropolitan Motors, designed by the CEO of the company. Thanks to the car’s reliability and sportiness, the Confible I saw market in the track and light sport markets, especially in the premium Markets.

The engine and transmission
Since sportiness was the main focus of car, the engine of the Confible was designed to mainly produce a lot of power in a small space. The car relied on its V6 and the 5 speed manual transmission to power itself.
Since the company was rather new, dealerships (Where maintenance and repairing could be done) weren’t widely available. The engine was provided with a good reliability to counter this problem. 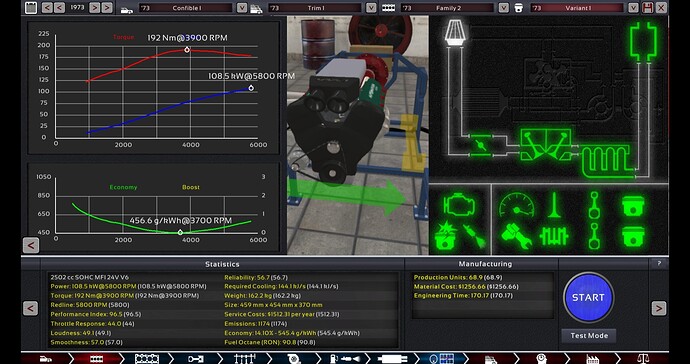 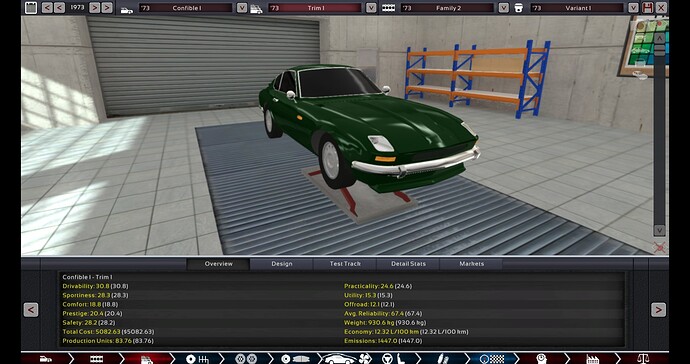 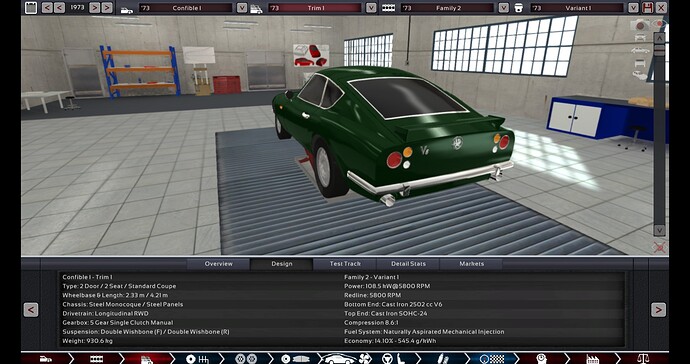 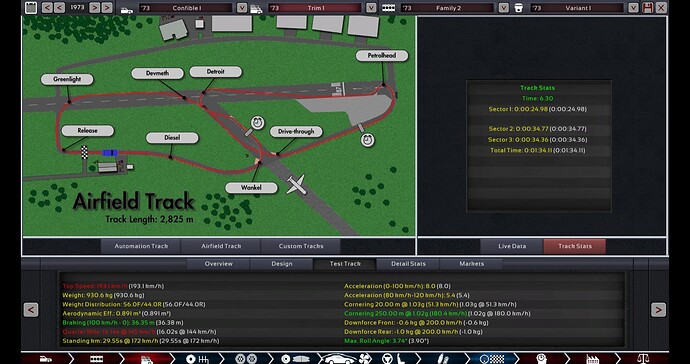 (Sorry for the double post, I like to keep OOC and IC separated)
Thanks for the support.I was expecting that my cars would be terrible to the others, glad that that is not the case.

LuxVagon-notoriously big
The LuxVagon was designed for the high class and government officials. This meant that fuel economy was an ignored issue. The LuxVagon saw a great market margin, having great success in almost every premium market (Detailed listing: Utility sport premium, family sport premium, muscle premium, sport, super, hyper, gt and gt premium).
The Engine and transmission
The LuxVagon came equipped with a V8 engine. The Engine featured high quality components, making it a high performance engine without sacrificing smoothness or reliability. The 195.9 HP 4001 CC engine gave the LuxVagon a great performance and top speed.
The transmission was a 5 speed manual with a single clutch, spaced out a bit to give it a smoother feel. 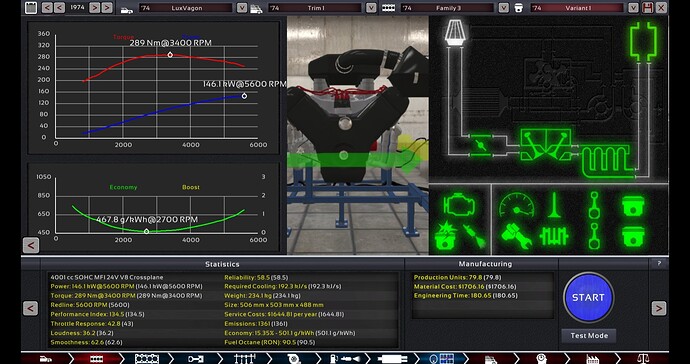 20160903113114_1.jpg1914×1012 394 KB
Wheels and suspension
The LuxVagon featured 225 mm in width tires, with a rim made from magnesium to ensure that the car was as prestigious as it could be. The car was equipped with rather large brakes (325mm front and 305mm back), the brakes were tuned in order to make braking smooth.
The suspension was quite the engineering problem, but after some time, the balance between smoothness and drivability was found. as such, the car was a smooth ride that could take sharp turns with not much of a problem.
Pictures 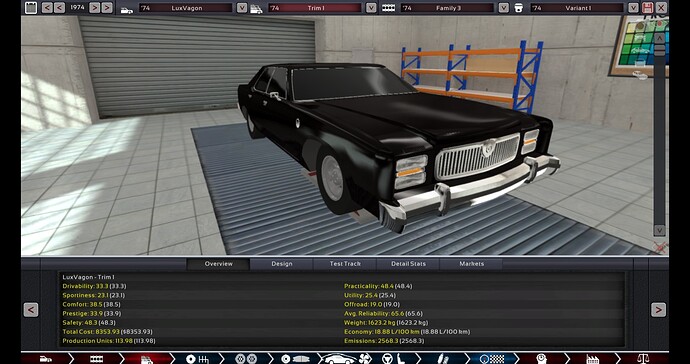 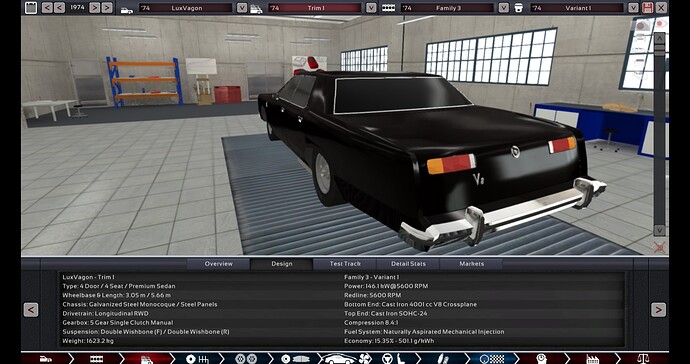 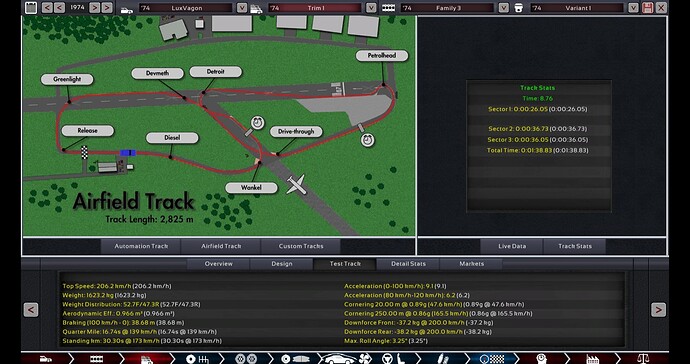 Why the hell do the GT and convertible markets want this thing for?It’s supposed to be a luxury car not a performance one -Ernesto Montana.

Conquistador-Throughout every dangerous zone.
Considered by some as a failure, the Conquistador was a horrible attempt at an off-road vehicle. The car high in cost and low in performance only gave decent results in the markets, even if it gave a decent drivability and reliability.
The Luxvagon and the aging Confible overshadowed the relatively low amounts of money won by this car.
The engine and transmission
The Conquistador came with a longitudinal 4x4 drive type. The engine was a turbo-charged v6, this was a wild attempt at testing the new turbo technology. The only thing notable from the engine was the smoothness. The Conquistador used a 5 speed manual transmission. 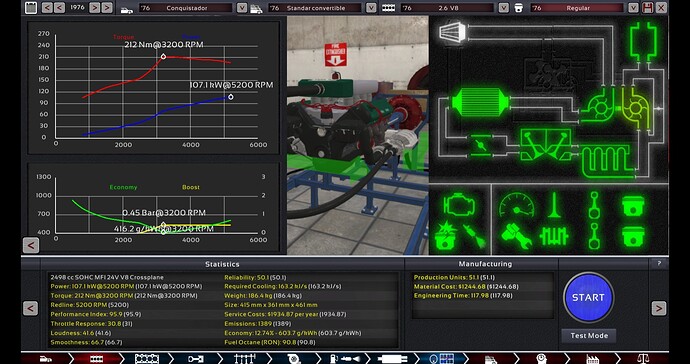 20160906183823_1.jpg1914×1012 404 KB
Wheels to interior
The Conquistador attained it’s drivability by using wide tyres along with disc brakes. The suspension is mostly focused on upgrading, but it still perform decently on pavement.
The car features a mid to high quality interior and radio, the electrics are the standard for the time. 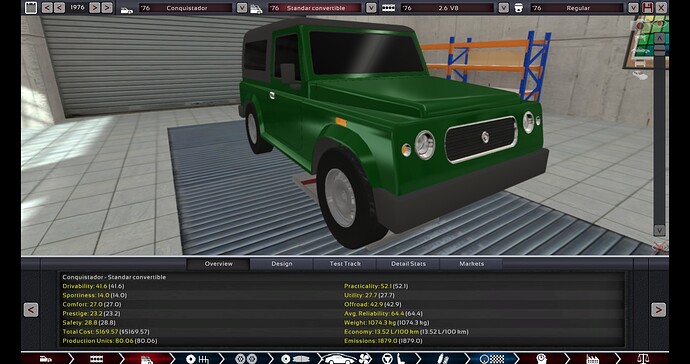 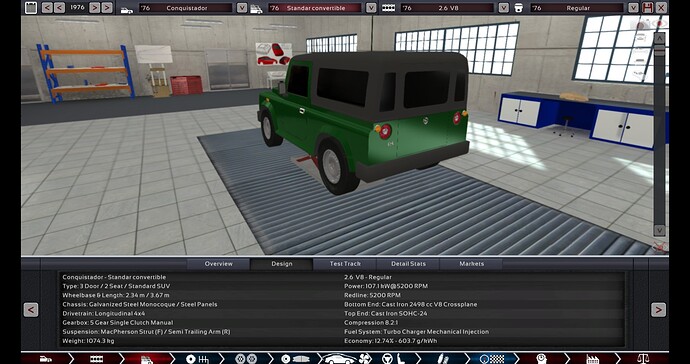 Apurado-Confible’s bigger brother
The Apurado was a sport car built in 1978, based on performance. The car ended up with a decent price, competing to replace the Confible me.
The car selling price with an 80% sales price (180% of the production cost) gave a lot of success in the sport car markets, giving a boost to the company.
The engine
A naturally aspirated engine, the Apurado used a v6 placed in the front. the engine was smooth and reliable. it also produced a nice sound, fit of a sports car. 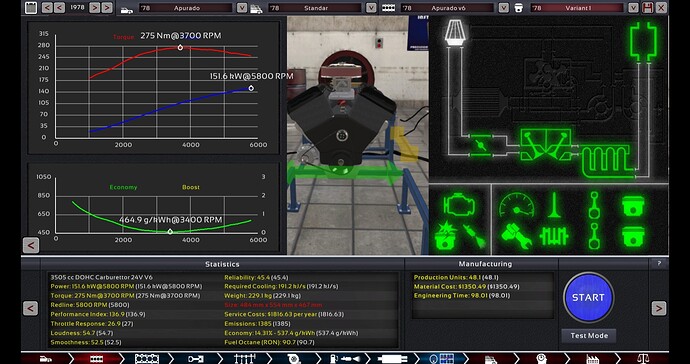 From the transmission to the interior
The Apurado used a 5 geared single clutch manual with an open diferential.using this gearbox the car got an estimated max speed 227.8 km/h.
The Apurado used 16 inch rims made from aluminium alloy, along with medium compound tyres with a width of 195 mm. the brakes used were vented discs (both in the front and back of the car), being in the middle of smoothness and sportiness.
The progressive gas mono-tube suspension with a ride height height of 215 mm provided the car with a great cornering performance without sacrificing smoothness.
The interior was a high quality standard interior, featuring a standard 8 track. the security wasn’t left out, as the standard safety features were raised in quality. 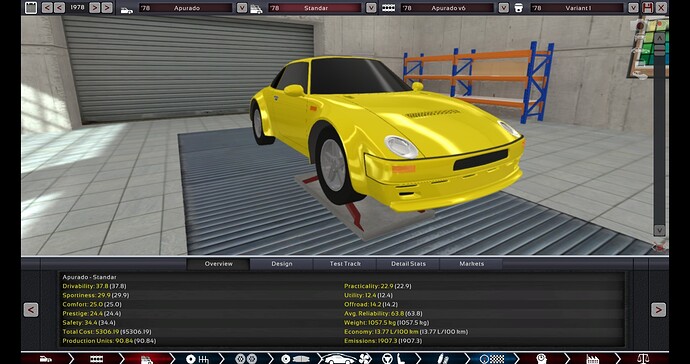 Looking back at the conquistador the turbos are very poorly optimised as there is a lot of lag for pretty low boost. Im sure you could reduce the turbo size to reduce lag while not actually effecting power.

Coming back as a Company
So, after the release of the apurado, while the Ala was being developed(a tiny little car for city use), Ernesto Montana decided that it was a good idea to take sell most of brands assets, leaving himself with a fortune.

8 years later
A somewhat crazy millonaire, called Santiago Lagos, managed to buy the last assets of the company.Metropolitan Motors only had the logo and name left, but it was enought for this man to continue the legacy of the company.
“The small prestige that Chile had in the car industry is going to be restored and improved upon.The time for this company to shine is right on the corner”
-Santiago Lagos at a really small conference room.

Out of context:TL:DR I’m going to try to post cars again for this company, maybe I’ll try to learn how to photoshop to make the cars look nicer.

The Aguila-A car for the whole family
The brand new car from Metropolitan Motors, The Aguila aims towards the European and American markets.In 1987, the company had spent the previous year preparing everything to start the Aguila, facilities for the engineers and designers were the main issue.The company had gathered some of the previous engineers in 1987, they came up with the idea of the Aguila, a safe family car to export to the world.
The Aguila saw success in the family market(especially the sport one) on America and Europe, the Aguila also attracted buyers looking for sport and pony cars.

Features
The Engine:The car is powered by a 3.8L V8, producing a total of 224hp.The Engine was reliable and responsive.
The Engine runs on premium fuel, since it has a 94,9 Fuel Octane. 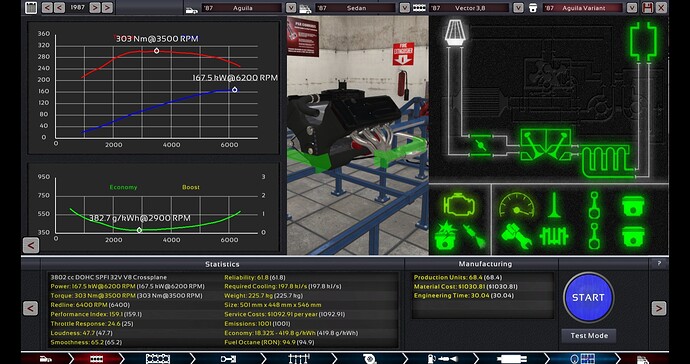 Driving:Reaching a top speed of 233 km/h, the Aguila is without a doubt a sports car designed for the family, the car features a 5 speed transmission, with a rear wheel drive longitudinal Drivetrain.
The car has 215 mm in width tyres, with a wheel diameter of 680 mm. The rims are made out of cast aluminium Alloy. The Vented disc brakes are designed to endure years of use, they also provide comfort to the ride.
The progressive suspension is designed to bring sportiness without sacrificing comfort.
All of these features provide the Aguila with the perfect driving experience, bringing sportiness with the practicality of a family car.

Interior:A 5 seated standard Interior provides the car with comfort and space, featuring a dual speaker AM/FM radio with a cassette player.
The Aguila comes equipped with the following drive assists: Power steering and Antilock braking system, this makes driving the Aguila a pleasure to the driver.
The Aguila comes equipped with one of the most sophisticated and advanced safety of 1987, ensuring the safety of all passengers. 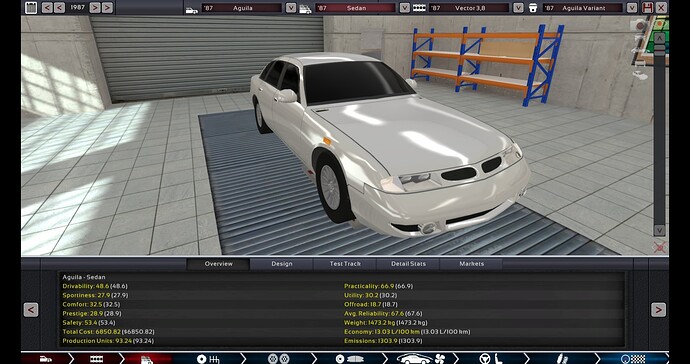 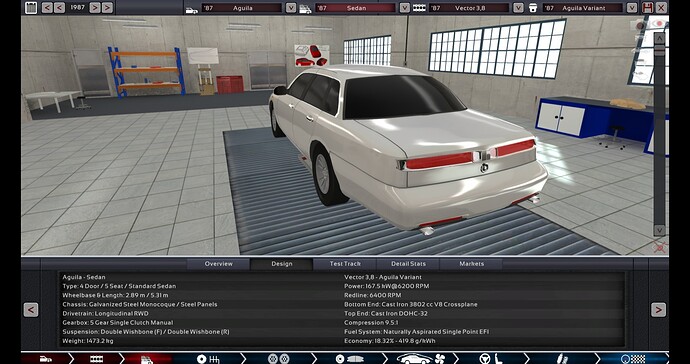 That thing looks as good as it drives - just the thing for families of the late 80s/early 90s willing to inject a dose of excitement into their lives.

Halcon-A car for the whole family, now turbocharged.
Designed by a brand new wave of car designers and engineers, from diverse parts of europe, that joined Metropolitan Motors.The Halcon was designed to go along with the Aguila in the family market.
The Halcon was more competitive than the Aguila in the family market of market of Europe, this solidified the sales of the Family Sport market in both regions, the car’s easy to drive nature also attracted buyers from the Fun sector.

The Engine
The Halcon is powered by a 2.2L Inline 6 cylinders four valves engine.It features a VVT intake along with a Turbo Charger.
It also has a Two-way catalytic Converter, this makes the Halcon the most Eco friendly car released so far. 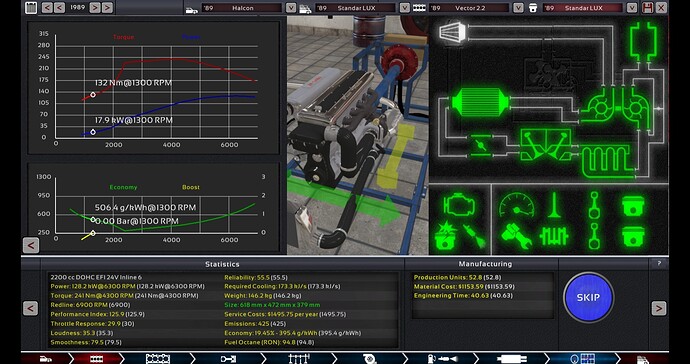 Driving experience
With a top speed of 217 km/h, the car uses a 5 speed manual transmision.The tyre choice is a medium compound tyre with 15" Alloy rims, The brakes in the front and back of the car are Vented discs brakes.A progressive suspension with gas mono-tube Dampers and passive Sway Bars provide the Halcon with a comfortable driving expirience.
The car employs the use of all the Drive Assist tecnologies that are available to us, it also features a AWD and a cruise control system.

Interior:This is where the two models of the Halcon diverge.

Standar
Having a 5 seated Standard interior, featuring electric front windows and the ability to open the trunk by using a small panel of buttons in the driving wheel.A dual speaker AM/FM radio with a cassette player comes with the car.
An advanced safety sistem is featured with the car. 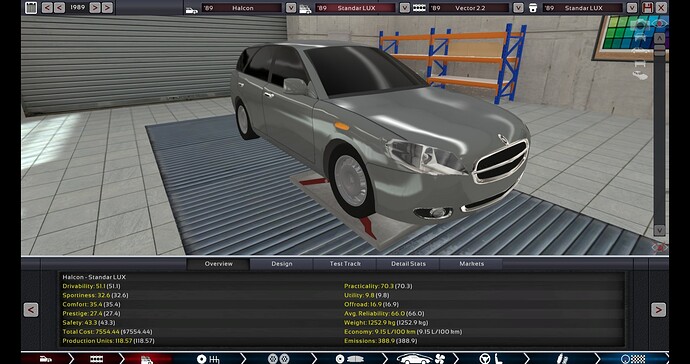 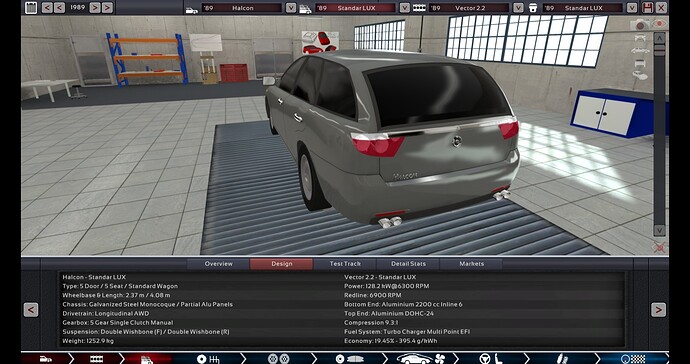 Extra
A 5 seated premium interior, the Extra edition comes with Electric windows(on all 4), the ability to unlock the trunk by pressing a button the keys, leather for the seats, electrically adjusted front seats and interior lights for all the passangers.
An upgraded and high quality AM/FM radio with a cassette player is equiped in this version. 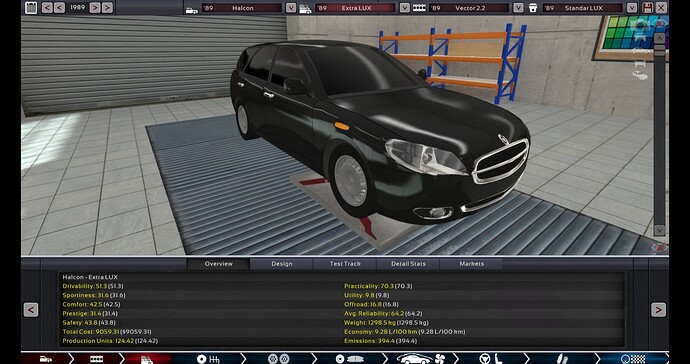 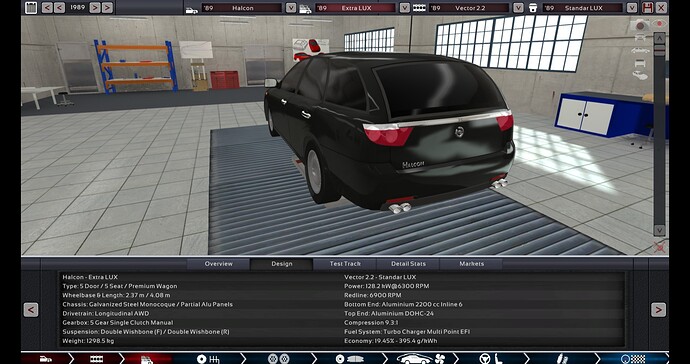 So, here’s is my new car, I probably went to overboard with the technology.
Thanks for all the small bits of I aproval I have been getting.