Also, back door becomes a grill! So your 2yo girl can make a nice barbie-cue! Isn’t it the dream of all girls?

you forgot to camber it out and put some sick rims on it.

It doesn’t look as plastic wheels as the hubcaps do. 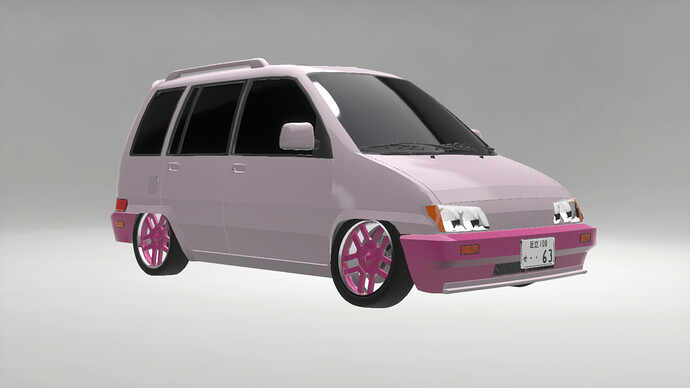 One sucessfull and fun collaboration later, and we have this:

Big thanks to @Marcus_gt500, who did the syling for this one. I think it looks fantastic. 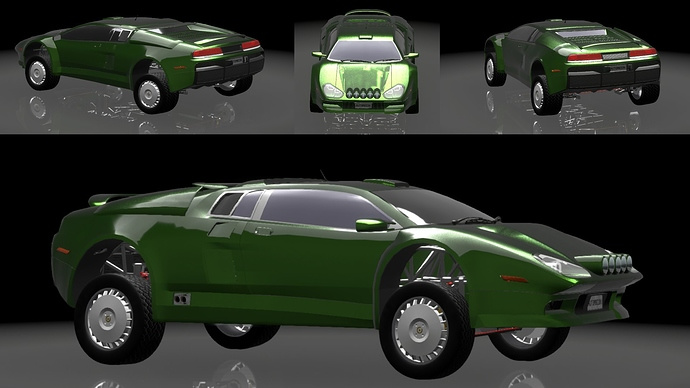 2002 saw the introduction of the Scorpion by Track & Trail Fabrication. It’s a tube frame, fiberglass component car with a bespoke AWD system and off road wishbone independent suspension. Just add your own 2JZ engine for a supercar you can drive from Paris to Peking. The example posted makes 375hp, runs the quarter in 13.15s in Automation, and pulls .958/1.01g on dirt tires. No driver’s assists.

Expect more collaboration works between me and @Obfuscious! 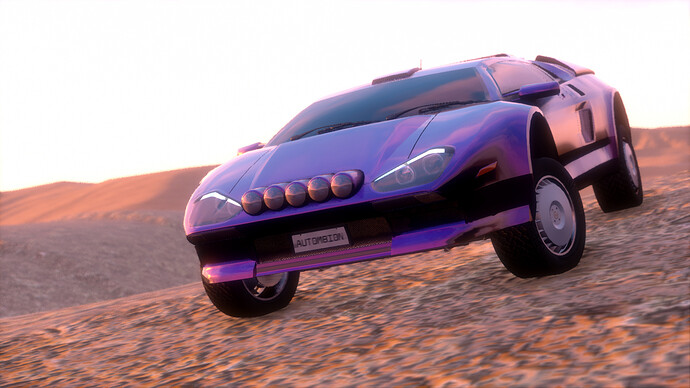 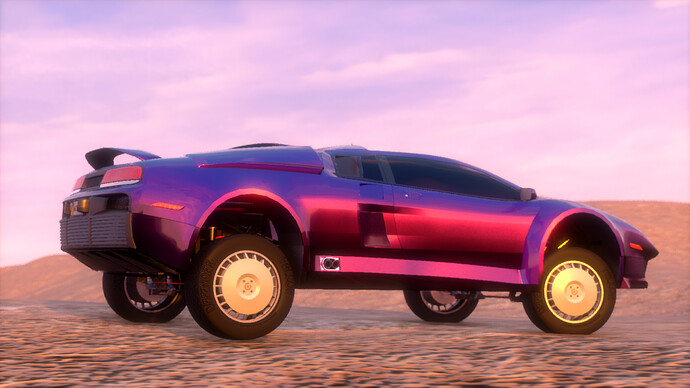 Thanks @Marcus_gt500, who styled this one as well. 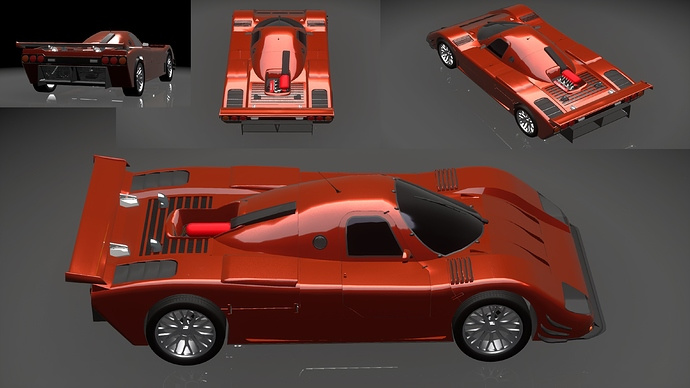 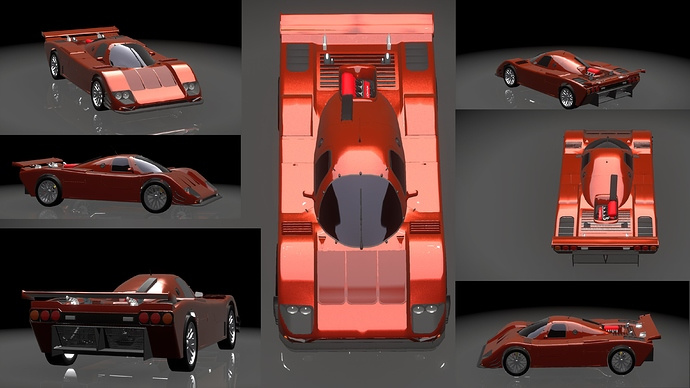 Another tube frame, fiberglass creation by Track & Trail Fabrication, and styled by MV Design, the Nightwolf GNX can be fitted with a range of engines. This example uses a turbocharged 3.8 ohv V6 to produce 360hp, routed through a 5 speed to the rear wheels. Weighing under 2900 lbs, performance is brisk. Two piston disc brakes with 10” rotors provide plenty of stopping power. No power steering or driver assists, it’s involving but not particularly difficult to drive. It’s a track toy, but the suspension is supple enough for bumpy roads. 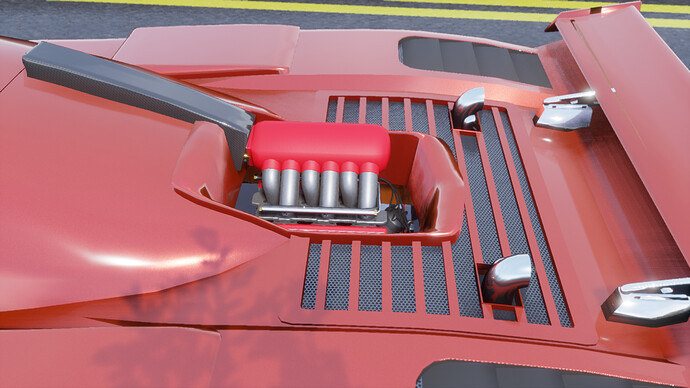 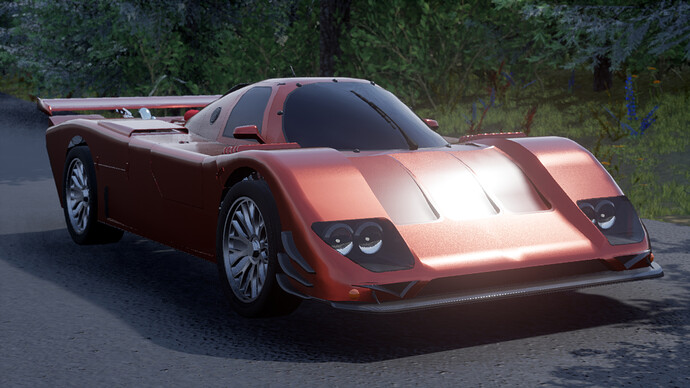 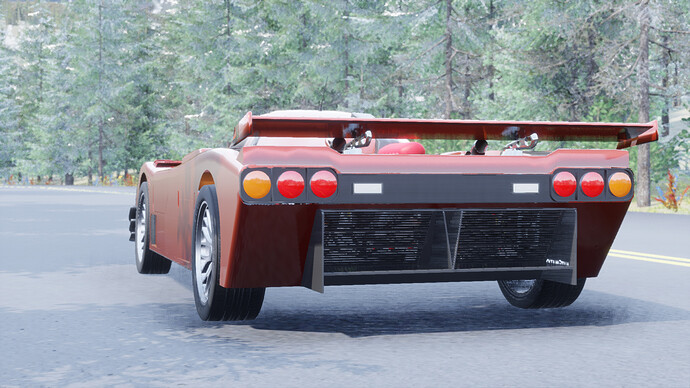 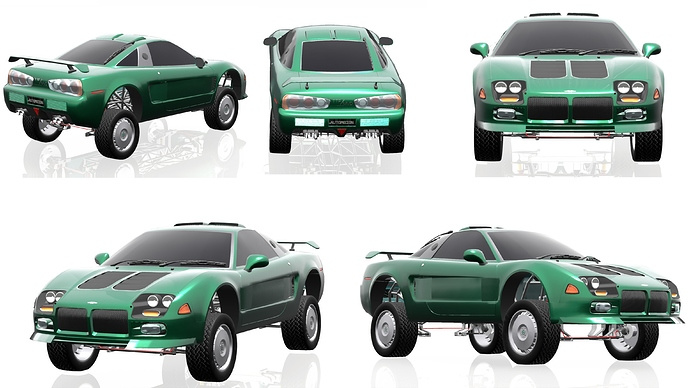 Another component car with a tube frame and fiberglass panels by Track & Trail Frabrication, and styled by MV Design. Mid engine, rwd, as rowdy as you want it to be. Insert your own four banger for mixed surface fun. No driver’s assists. This example features an LPE modified 240hp 2.2L K series Turbo II from an '82 Gavril Barstow. 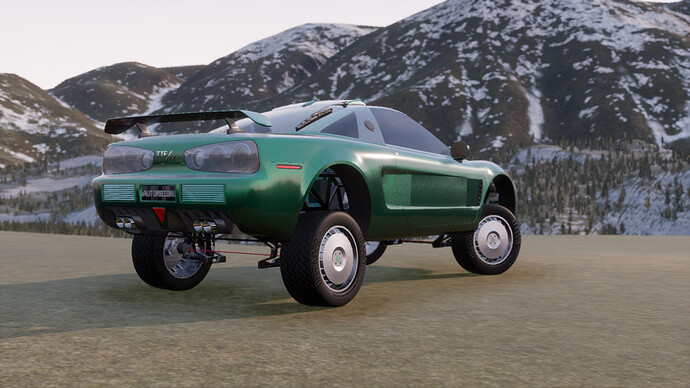 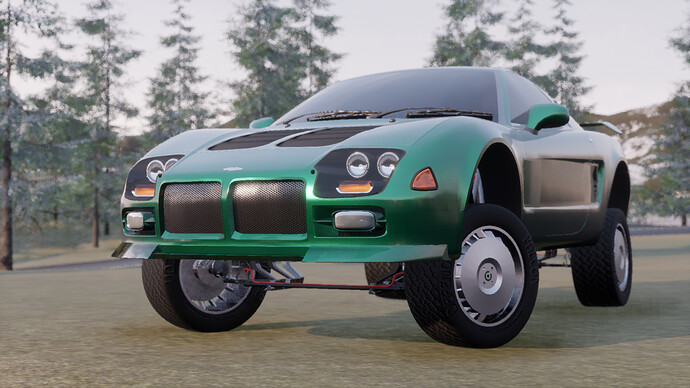 And have a Infernus 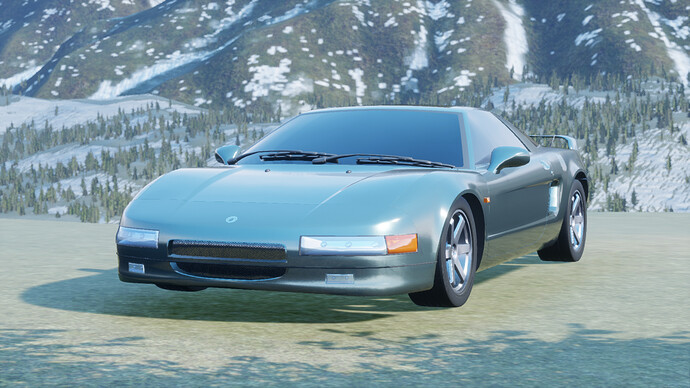 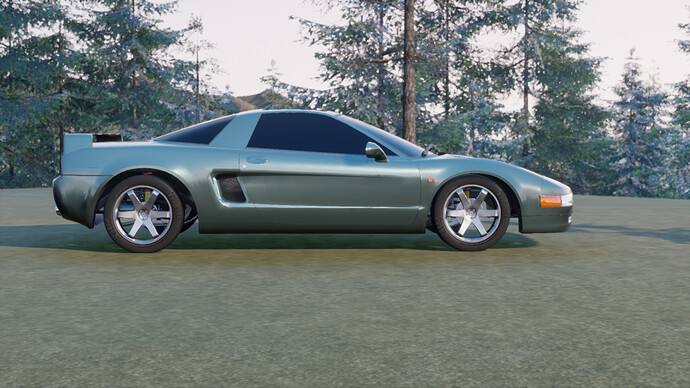 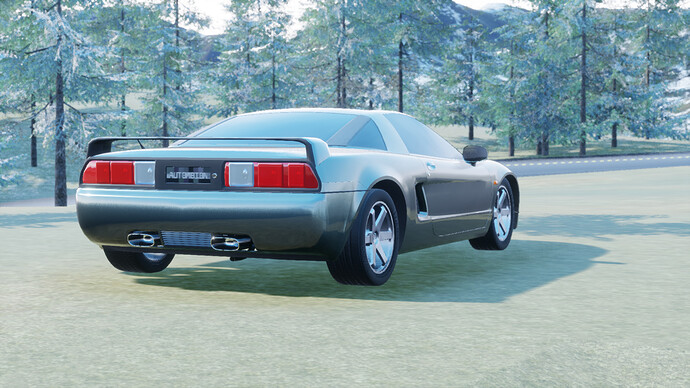 The Emer Aria is a little sports car with great handling with simple yet stunning visuals. Try one today! 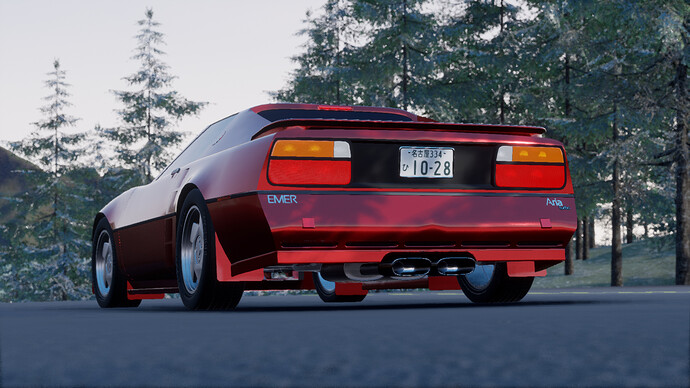 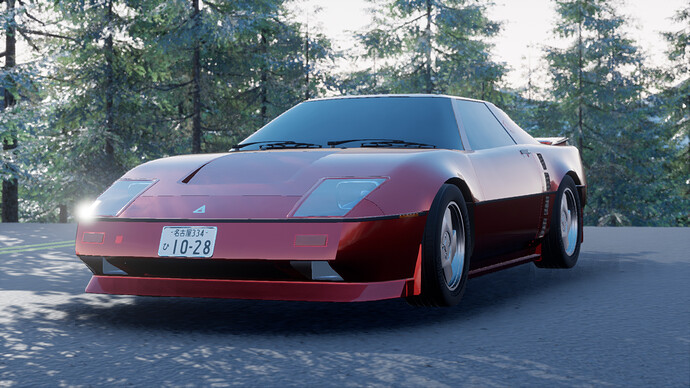 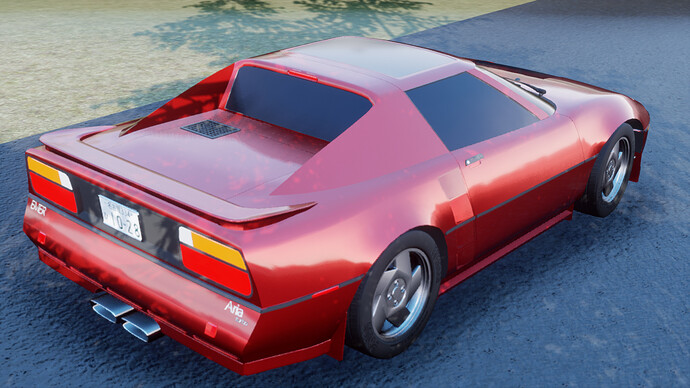 Considering the limitations of the body you chose (small engine bay in MR configuration), it seems that you actually did an excellent job with it - it looks like an 80s sports coupe should. Well done!

now i want to see a Nonus…

I’ve started one some time ago. The bug on the silvia body rear I was using prevented me to finish it.

oh, well hopefully an update fixes that sooner rather than later

Hey friends! Long time no see! I’m sorry for vanishing away from the forum, but I finally found a real job I love to do, but it took away all the free time for gaming. I’ve just entered the game and boy what a graphics upgrade! Really loved the new photo scenarios, specially the sea of information! Unfortunally I’ll no longer be frequently present here, and accepting requests, but you can aways find me on my work fb page (MV Design Custom Works) for making some sick 3d printing requests, or just chat away! See you later! 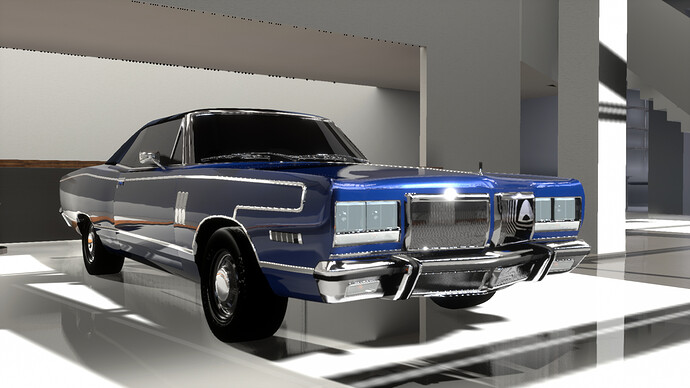 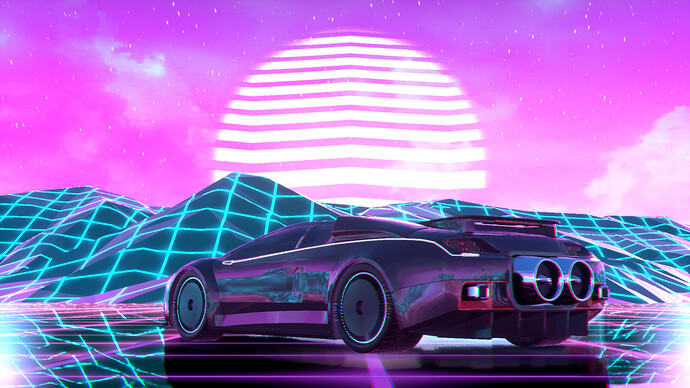 Great to see you’ve found what seems to be your calling. That jet-car looks pretty epic too…

Hey pals! Not playing this game that much anymore, but here’s something i’ve made on the last few days. Not a replica, just an inspiration. 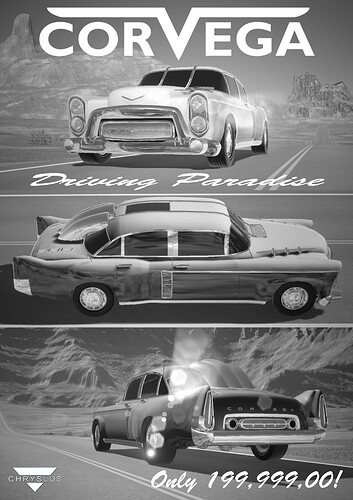 Does the Corvega come with a complimentary Pip-Boy?

Is it nuclear powered?

As far as Automation is concerned this car is not nuclear-powered, but it looks so stunning that it deserves some full-color pics to go along with the B&W ad you just gave us.

No, but it’s dashboard screen have some of it’s functions.

Lore-wise, yes. Game-wise, Ultimate fuel, since the game doesn’t explain much about it, we can consider it nuclear power.