My Car and Me

Hello all. Just pre-ordered after hearing about the awesome game on RockPaperShotgun.com 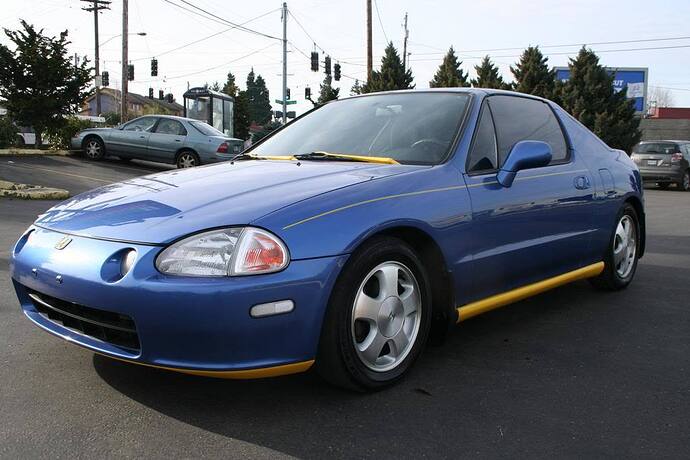 1993 Del Sol with a D16Z6 VTEC. I have only had this since February. I found it for a song. I am not really a Honda guy, (Always been a Mopar Guy), but the Del Sol was always a car I liked the looks of. (mostly thanks to Gran Turismo 2.)

Its really clean for being almost 20 years old. The only aftermarkets I can tell are: It has been lowered by a few inches. It has a tighter suspension. It has a cold air induction kit (Injen). It has aftermarket headers (DC). It also has an aftermarket exhaust. (Not sure which brand, but thank god its for better exhaust flow and not just a glass pack that makes the car sound like a go cart. I hate those things!)

The only thing I want to change in the near future is to get rid of the yellow highlights. And, maybe further down the road I would like to do a H22 swap and then paint her British Racing Green.

[quote=“Knyte”]
The only thing I want to change in the near future is to get rid of the yellow highlights.[/quote]

Thank god, do that asap.

yeah there’s a beat up del sol for sale on a corner up here, white, fartcans, steelies(you bet that ricer faggot probably put some dumbass wheels on them), some swapped engine, has like 190k miles on it, and he’s asking like 4500 for it. made me lol and walk away.