My Neighbourhood Must Be Up To No Good

I live in a quiet, now mostly family friendly, middle class suburban neighbourhood just around the corner from a primary school, nestled some 7km west of Melbourne’s CBD. The location is, for Melbourne’s housing market, at a premium and is pretty much impossible to buy into these days, so it was fortunate that I happened to be looking for a house just at the moment when there was an unexpected lull in the buyer’s market, forcing the prices down sharply. At the time of purchasing and moving, I drove a ‘99 Citroën Xsara 1.6L which had been handed down through the entire family before it came to me, having been well done over by a crook of a mechanic and over a decade of being relegated to the outdoors where the harsh Australian sun (lol) would beat down upon it most days of the year. But I digress, the main point was that I figured most of my neighbours’ cars would be something like that, and maybe the occasional family sedan.

Just around the corner, opposite aforementioned primary school, were a spate of exotics. Not just the usual overweight bling favoured by soccer mums and the overcashed bourgeois that lived in such posh suburbs as Toorak, where the average daily drive would generally either be a Porsche Cayenne S, or a definitely-not-for-the-outback Landrover (both which were hence disdainfully nicknamed “Toorak Tractors” by the locals), but the less common picks, that would just happen to sit outside, most days of the week. Immediately I was suspicious, because until recently, this neighbourhood was part of a generally dodgy milieu, and so “rich and drives a flashy car” usually equated to “drug dealer”. But in truth, I suspect that most of the owners of these cars are just obscenely successful tradies who can’t think of anything better to do with their cash. 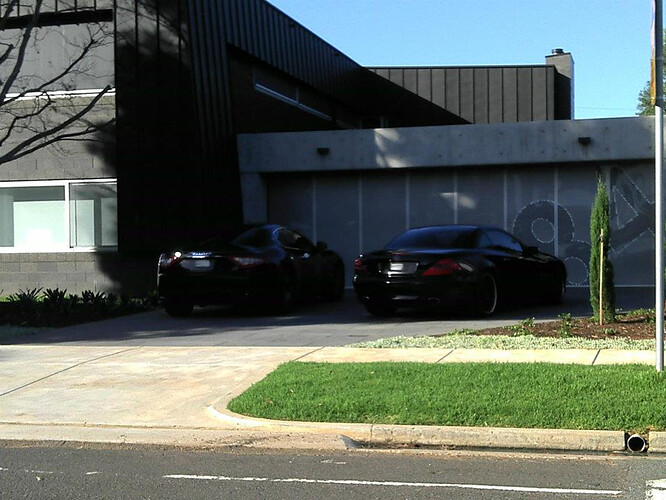 Sorry for the crap photo, it was taken with my old phone camera, and needless to say it was a crap phone camera. You may have to take my word for it that sitting on the driveway is a Maserati Granturismo S, and a Mercedes C 63 SL AMG. What’s in the garage? At one point, it housed a bright red '10 Chevrolet Camaro (with RS trim, but I never found out which spec it was)… and a Toyota Hilux, which is apparently the daily drive.

Just around the corner from that was this: 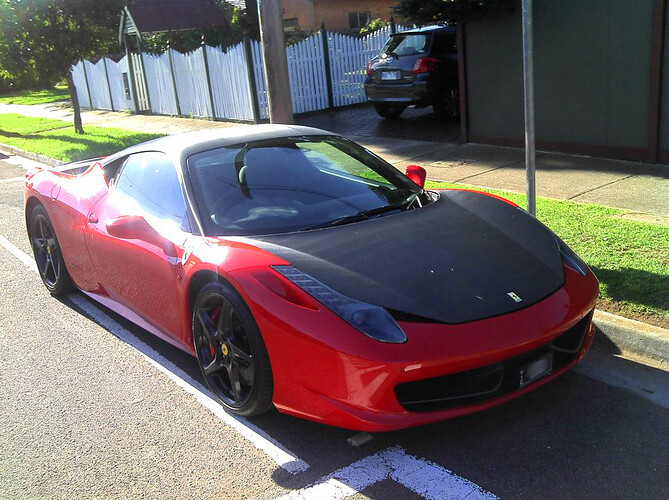 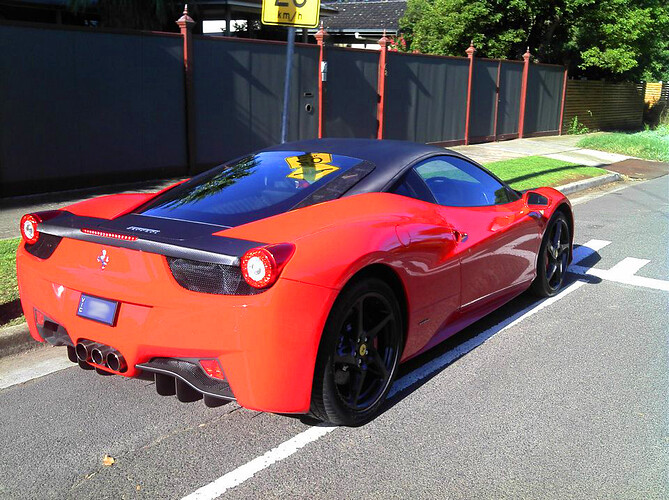 I’m not going to bother posting a photo of the Bentley Continental GT, nor the Porsche Panamera… nor the hilarious 300C Chrysler stretch limo that occupies the same driveway as the Panamera (I’m guessing that the stretch limo is part of the owner’s job).

But all those cars are all a little ho hum compared to this legend: 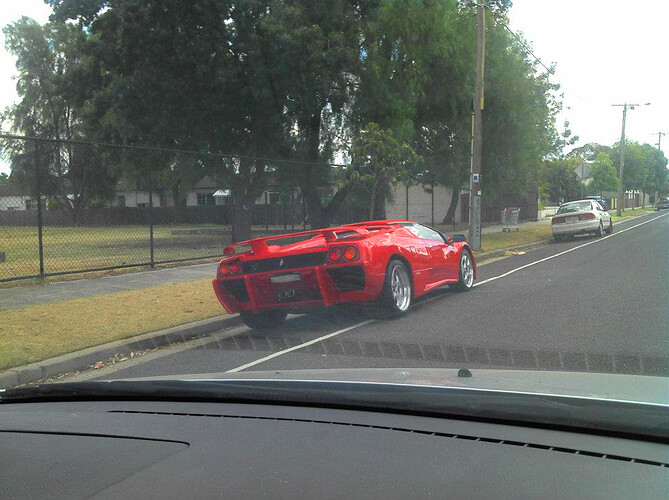 This here is my trump card… now if only I could find a Countach. Sadly it’s around less than the others, so I’m guessing that it’s an occasional visitor.

Finally, since we’re on the topic of (mostly) Italian supercars, here’s a bonus pic snapped while I was driving through the Dandenong ranges: 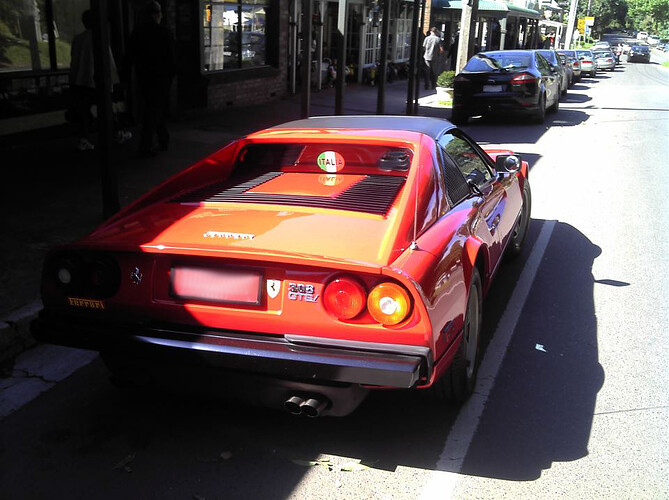 One thing I really like about Melbourne: it appears to have a vibrant restoration and antiques culture. There’s absolutely no shortage of road legends to be seen anywhere near the city, or to the East or along the coast (out West is a bit feral, so less likely to see those and more likely to see Bommodores and bogan utes). Next time I see a DB5 I’ll try and get a photo!

It’s rare to see such cars with the recent economical crisis, but I guess not everyone suffered from it.
Big changes in your neighbourhood then? It indeed is strange to suddenly see fancy cars spawn around your house, but lucky!

Australia was relatively spared by the GFC, in fact Australia was one of the few OECD countries that didn’t get completely slammed by it. There are two reasons: a) a very swift and extensive reaction by the government, for which the then-treasurer won some World Economist award and, b) China and India are rapidly industrialising meaning that they’re buying a butt load of coal from us, making us the prime contributor to the bulk of human driven global warming

The side effect of this is that Australia remains financially in “relatively decent” shape, despite what appears to be sustained best efforts to the contrary. However, we also now happen to be one of the most expensive cities to live in the world now. Unless you go to Maccas, you’d be laughing if you could get a halfway decent lunch for less than 15 AUD/ 15 USD/ 11 EUR/ 7 GBP. A small 2 bedroom house anywhere near the city will set you back on average 500-700K AUD, and it’s been that way for over a decade. Local retail is really suffering because shipping and import costs from overseas brands are still far cheaper than buying locally. And we also have that wonderful luxury car tax which jacks prices significantly, so I don’t really get why I’m seeing more and more in the way of exotics on the road, but there you go.

For example, today, driving home from work, I spotted a 360 Spyder: 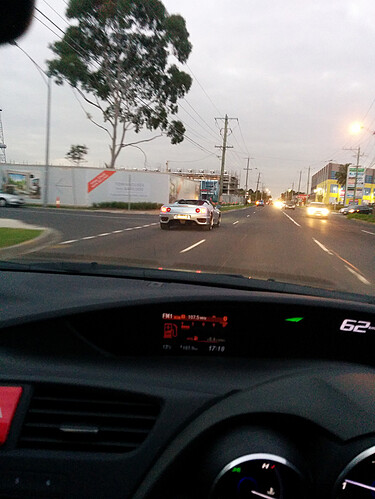 I’m not sure what one of these were doing out in the Wild West, but the truth is, since the Italian Quarter nearer the city seems to have a robust Ferrari club, I’m pretty used to seeing 360s, 430s, 599s and even the occasional Enzo. Happily, I rarely see the more recent California sellouts

I never see anything like that here on the Isle of Man. Though I am lucky enough to live opposite a lovely Nissan GTR owner, and I also see the occasional 458, but nothing much more than that.

(One car that I was really happy to see, although it is not that rare in other places, is a modified Lancer Evo V. One of my favourite cars of all time

If we ever all make much money, we should buy our own private island and name it Cartastic Island or something like that, where only ferrari’s lambo’s maseratis and other luxury or sportscars can drive. Have our own council and law, with a 10km straight road with no speed limit! Dream on!

We have to do this! haha!

I’ve noticed driveway with the C 63 and Granturismo also has a DB9 sitting on it. Will see if I can snap it properly when a good time comes.

Business idea: make participants pay each 1 mil to race on the island, grand prize is 10-15 mil, get atleast 20 people to enter. Boom, island payed off in less than 10 years.

Also, damn 500-700k for a house? I’d rather get a small apartment and an aventador instead of that.

I don’t think that is a smart idea, 1 mil is way too much to race. Make it a reality TV show! You literally get paid to advertise the island on TV.

Reality TV, Tourism and a Casino should be the way to generate income.

Now, all we need is for the devs to lend us 90 million dollars…

Pocket change! More like what we get paid in interest at the end of the year… xD

As promised, a photo of the DB9 on the usual driveway. Most of the cars I’ve snapped on my street have 2 digit vanity plates. Wonder what club they’re part of… 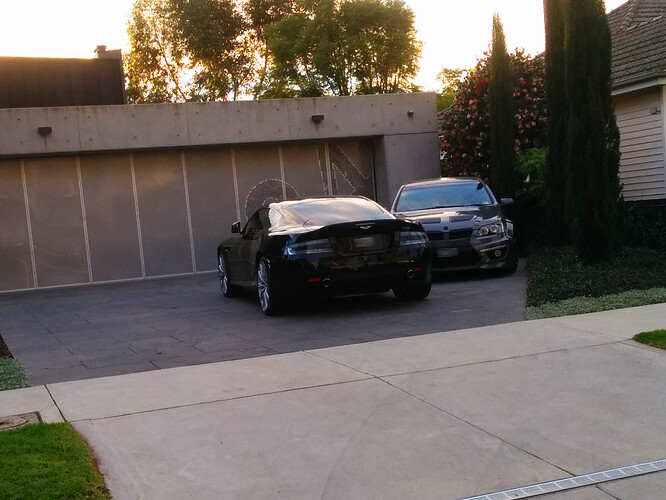