Hey guys! (Just to mention in advance, this post contains some large pictures. If this is a problem and you would like me to resize them, just ask!)

So, as many of you already know, I used to play Automation, and do the AutomationHub streams using a very crappy HP laptop, which I never stopped bitching about.

Well, I’ve been a good boy this year and Santa brought me everything I wanted, so I’m proud to bring to you, my new PC!

Here are the specs. We’ll get into the pictures after!

CPU: AMD Athlon X4 860K - currently running at 3.7Ghz since I’m using the stock cooler.
GPU: Gigabyte Radeon R9 270 Overclocked - Great card for the price, also looks nice in plain black.
RAM: HyperX Fury 8GB - In a beautiful white!
Motherboard: MSI A78M-E45 - very nice looking board, and very overclock friendly!
HDD: WD Caviar Blue 1TB 7200rpm - does what it says on the tin really!
Case: Corsair Graphite Series 230T (Orange) I was adamant that I wanted an orange case, because again, as some of you know, orange is my favourite colour! So I was delighted when I found that Corsair made one that was just perfect!
Monitors: 2x BenQ GL2250 I went with two 22" monitors so that I can edit videos and do live streams with much more convenience, and these monitors are 1080p and have a 2ms response time too!
PSU: Corsair CX500M I just wanted a modular PSU from a reputable brand, so there it is!

Now. Time for the pics of the BUILD! Just keep in mind this is my very first PC build, so I may have done things slightly unusually, or out of proper practice.

First thing I did was lay out all the boxes and took a picture! (minus the case, but you will see that later!) Then I went ahead and installed the power supply and hard drive in the case in advance, but there’s no pics of that. 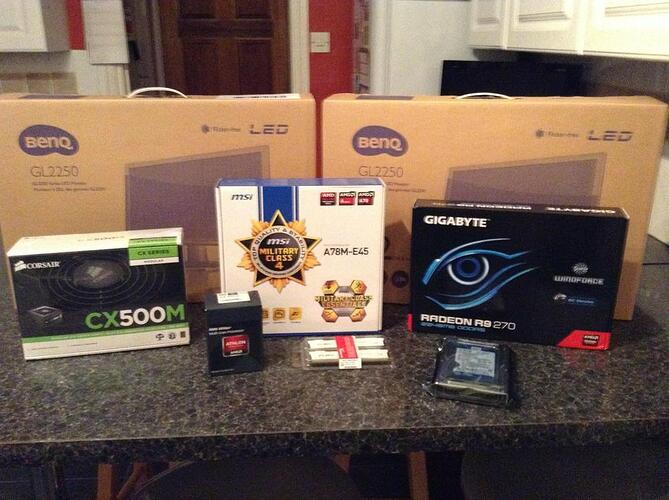 I didn’t take any pics of the CPU install, but I just want to say that installing the CPU was the scariest part of the build. The pins were MUCH less delicate than I thought, so it worked out okay in the end. Installing the cooler was a big faff though, I thought I had it the wrong way, but I couldn’t get it off the CPU, so luckily it was actually the right way around.

The RAM was the most satisfying part to install, and damn isn’t it beautiful! 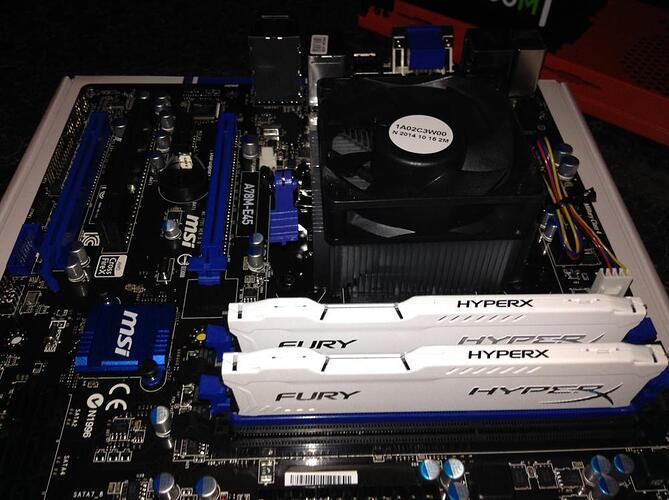 Then the board went into the case, and the GPU was installed. At the first attempt of mounting the board in the case, I actually had the board the wrong way and thought I would have to rearrange the standoffs, I even failed to notice the back ports were facing the left side of the case! 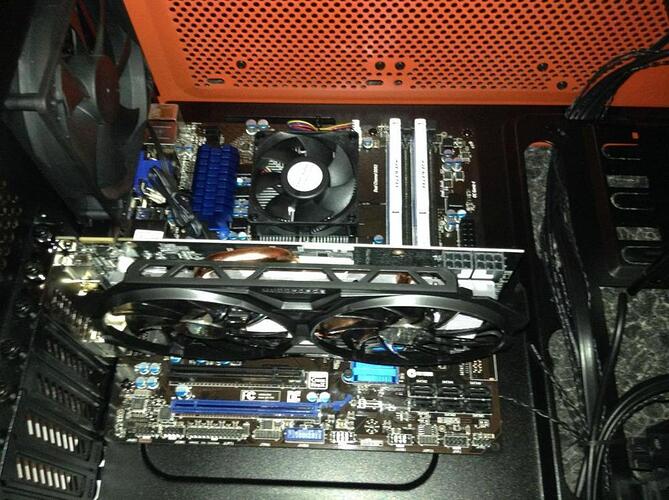 Then it was time to wire everything up and try a first boot. And, amazingly, it worked first time! 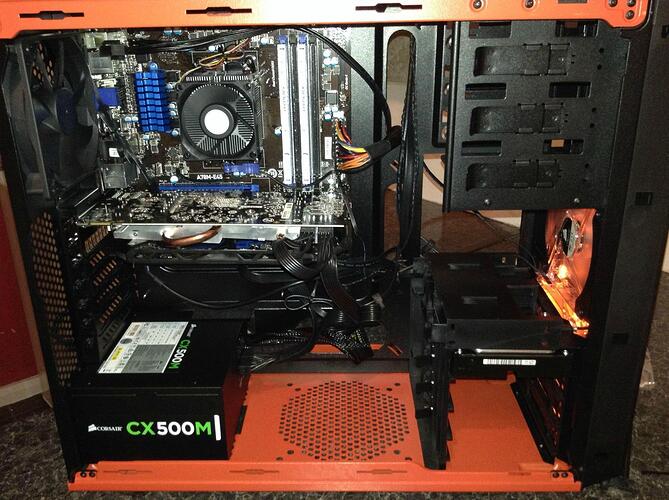 I’ll skip through all the OS install and drivers malarkey, and get to the other random pictures!

Here’s the makeshift setup I had in my kichen while I made sure everything was working correctly: 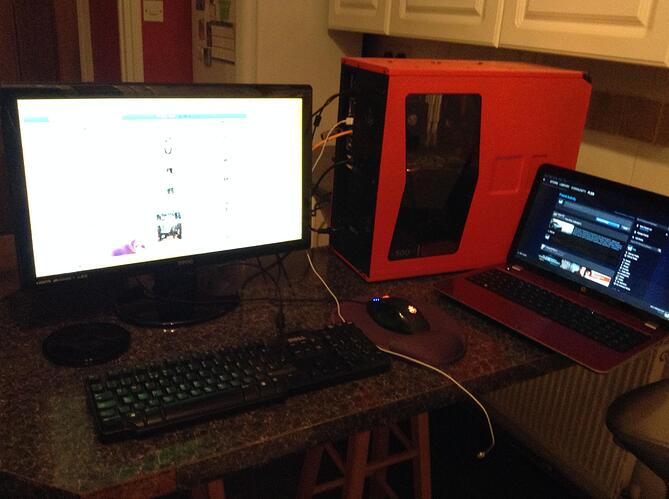 Then it was time to unbox my second monitor and move everything up to my bedroom, and voila! Here’s my setup as it stands today! Unfortunately I can’t use my 2nd monitor yet, as I need a DVI cable because my GPU doesn’t support VGA. 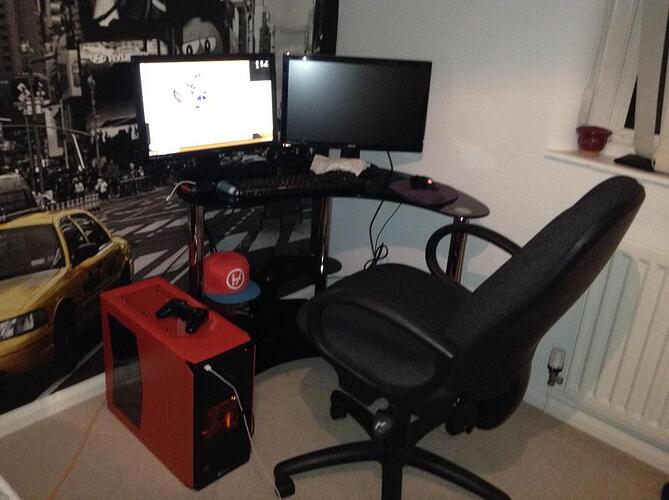 Cheers and thanks for reading! Let me know your opinions!

Yeah, I think this kit comes in 2x 8gb, or I could just get another 2x 4gb if I wanted an upgrade. I think cable management could have been a bit better, but other than that I’m completely happy with how it looks.

One quick question, why use an AMD cpu over an Intel? Intel (in my opinion, and probably factually) is far better.

I just feel that AMD do a better job at making good budget processors, but I also had a lot of help in choosing the parts, so I really can’t make a completely valid point.

Still, a wonderful build. I want one

Nice build! But you forgot one thing… A pic of Automation running on max settings!

Automation is actually very easy to run on max settings

Congrats on the new PC! First time I built a computer, I booted it up, everything was okay, but a black screen. After fiddling around, decided to remove the Cooler and CPU and re-attach. Finally decided to plug in what I thought was an extra power connector for the motherboard. Turns out, it was the CPU power connector!

Glad everything worked for you the first time, and may it treat you well!

Pretty similar rig than mine, except I have an i5 processor, 2TB HDD and the operating system’s on a SSD so it boots up super quick.

Automation is actually very easy to run on max settings

If you have the computer to run it

my own desktop, also 100% handpicked parts, doesn’t break a sweat, but my ageing HP i4 with some shitty gt760x can’t even remember the numbers just about has a coronary every time I boot automation up on bare bones settings

This build looks sexy. It sounds pretty fast but if it goes as fast as it looks then you’ve built a real tuner computer! (As opposed to a ricer computer haha)

And thanks for the great feedback! I’m still in awe at how this performs, I mean, for just a bit more money than an XB1 or PS4, this blows it out of the water! Project Cars on high settings is just staggering!