I suppose this is as much a challenge as a proof of concept. I don’t plan on picking a winner, merely seeing if this is possible and how well you will do.

In 1976, NASCAR and IMSA found themselves invited to the famous 24 hours of Le Mans. Unfortunately, neither NASCAR Cup car managed to finish, with the Charger being struck by an oil leak just two hours in and the Torino’s transmission having enough during hour 11. Let’s see if you can’t change that. So here it goes…

Congratulations on the promotion! Head Engineer of the Racing Division, was it? I’m jealous. Did you hear the other great news? The company wants to move into the NASCAR scene, and guess who’s making the first model? Hey, pony cars to cup cars shouldn’t be too big of a jump for you.

You heard coworker me right, my friend, you are making a cup car, and not just any cup car. You are producing a NASCAR Cup car that will go on to compete at Le Mans in 1976. The restrictions? Oh lord, there is a bucket filled with 'em. Let’s start with the general rules:

On to the Chassis:

The hardest part to replicate, the engine:

Well, I think that’s everything. Quite the laundry list, eh? No real due date, finish it as you see fit. The theoretical car should manage to get 180-200mph. No pressure. Godspeed engineers!

Ooh, I like how this sounds! Expect an entry from me within these days.

I hope you make better engines than I do. Best of luck!

If I’m reading this correctly, this basically means we’re incapable of building a 1975 model? I have no idea how to build a car with an engineering time of 12. This effectively limits the year range from 1965 to maybe 1969 or so, right?

Also, if I were you, I’d just set the trim year to 1975/1976 and pick an engineering time limit that sounds reasonable. 1-1 engineering time implies you designing to car brand new, from scratch, with no familiarity and with no cut corners or additional funding. However, the a lot of the idea behind a stock car is that you have already designed it, or most of it, and the parts which are changed for racing are basically going to have only a few made so there’s no need to design them as “assembly line ready”- think of setting the Automation slider to 0 in Campaign.

Wings are banned. BUT can we use wings just for the looks and set them at 0 in the aero?

Is the time restriction applied to the engine as well?

If I’m reading this correctly, this basically means we’re incapable of building a 1975 model? I have no idea how to build a car with an engineering time of 12. This effectively limits the year range from 1965 to maybe 1969 or so, right?

Essentially yes, I left it up to '75 more for the sake of options. If nothing else, 1965-70 is your pratical operating range.

The average car went for about $14k during '76. Staying within the other parameters, money is of my least concern.

About the '75-'76 trim, I didn’t want to require people to make two cars, but I did see that as an option. I saw it as simultaneous development of the tuned race version which would first compete in the '76 NASCAR Cup and of the market version which would release a year earlier in order to match the homolgamation rules of the series.

Wings are banned. BUT can we use wings just for the looks and set them at 0 in the aero?

The aero-cars were effectively eliminated after 1971 (they were restricted on engines), but go ahead (maybe next time I’ll allow useful wings but restrict them to 5.0L engines).

And yes, the time limit applies to the engine, hence it appearing in the general rules section.

Wait, I don’t get where you take your price information.

Is it the MSRP we can find in market or material cost?

I was referring to material cost (your car will hopefully be cost competitive on the market), but as I mentioned earlier, stay within the other bounds. I am ok with you exceeding the price cap. I am more concerned with people staying within quality and part requirements.

I have adjusted the price requirement: keep it price competitive in its respective market (muscle or pony) without changing the price markup.

Quick question: Would a less Powerful, More fuel efficient car make sense for this? The build i’ve made only does about 270something km/h, But it does 11 MPG. Should i keep this, or go down to the 9 MPG reccomended to bump up the power?

Quick question: Would a less Powerful, More fuel efficient car make sense for this? The build i’ve made only does about 270something km/h, But it does 11 MPG. Should i keep this, or go down to the 9 MPG reccomended to bump up the power?

The standard Dodge Charger at the time got 9 mpg and the NASCAR variant used the less efficient hemi, so more power is better.

Remember: you are racing in a separate class from the GT and LMP cars, because you are competing with other Cup cars. They aren’t fuel efficient.

Well, here in my entry for the Nascar/LeMans race. The '76 Markley Palomino GT. Engineering for the engine started in '68, with the chassis coming out a year later. It’s powered by a 360ci V8 making 300hp and 330 lb ft torque. Capable of hitting a top speed of 154mph, it’s a rather different beast than the emission strangled barge it’s based off of. 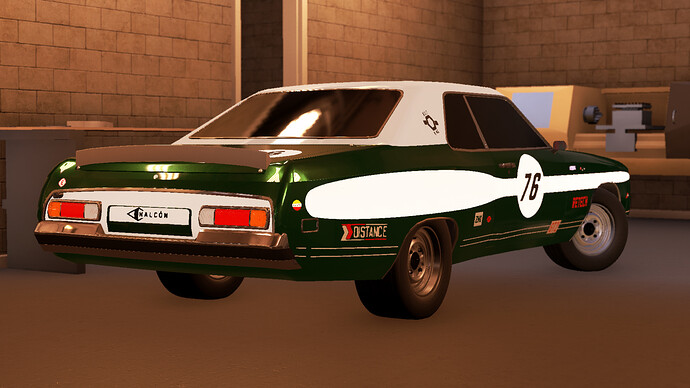 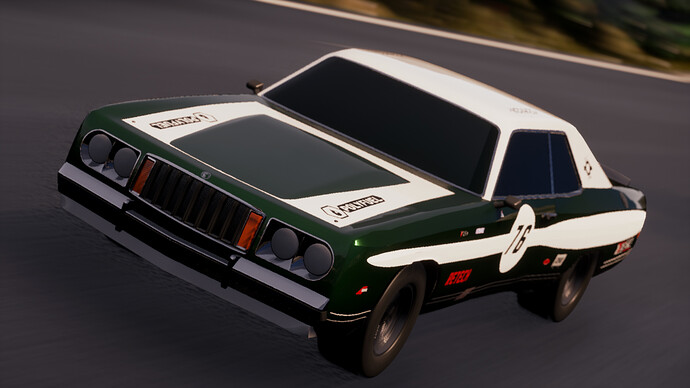 Definitely the kind of car that I would envision for the sport. Does it corner well? The top speed would mean that it would hopefully be competitive at the road courses (and Le Mans), which would require decent cornering.

It had really wide tires for the time, 235 up front and 255 rears IIRC, so it gets over 1G in the corners and does the Automation test track in 2:25.

Sadly, your engine is a tad too large. I needed to adjust the engine cap for conversions. The engine should be 358ci max. My apologies for being unclear.

A note to all: max engine size has been upped to 358ci/5.8L, since that was the actual engine cap back then. The Charger had a 5.6L hemi, hence why I had limited it there earlier.

Ah, well, I did just up the max engine size in order to actually match the historical rules, so do with that information what you will.

These are the real-life inspirations for the entries in this challenge:

A BIG BURLY APE IN A BRAVE NEW WORLD

The difference is that, as stated in the OP, the entries here must last the full race distance, unlike in the real 1976 24 Hours of Le Mans.

1966 Centauri Marauder, previously entered in the Trans-AM series before entering NASCAR. This full sized muscle car has a 351hp/361lbft 358ci V8, and a top speed on LeMans of 166MPH for a 4:38 laptime
*technically it gets 8.4mpg so it might not quite meet the rules 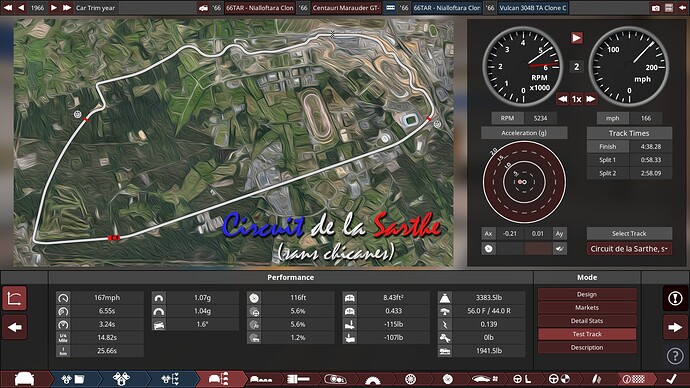 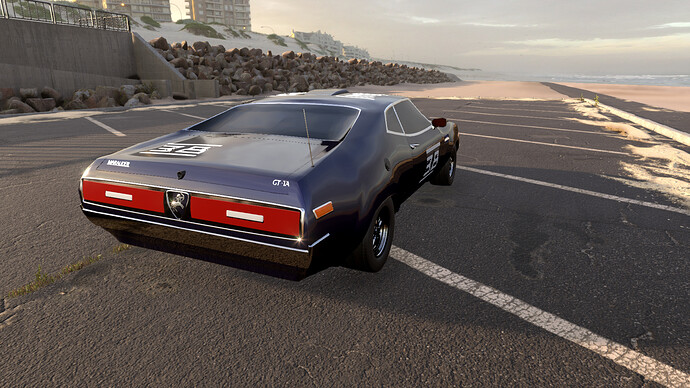 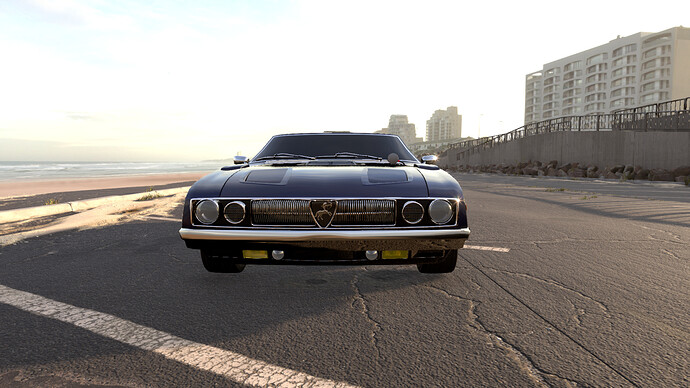 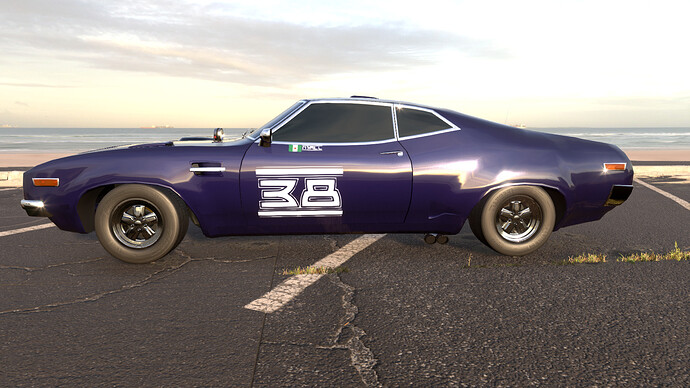 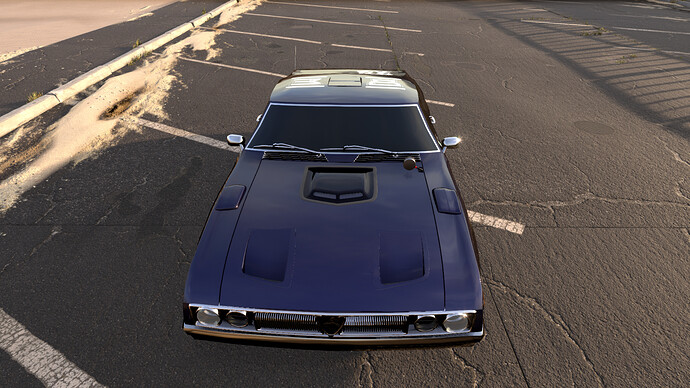 edit 1
managed the 9mpg and 70% in the right category now. Top speed up to 170MPH though the extra chonk from some different settings means the laptime is still 4:38 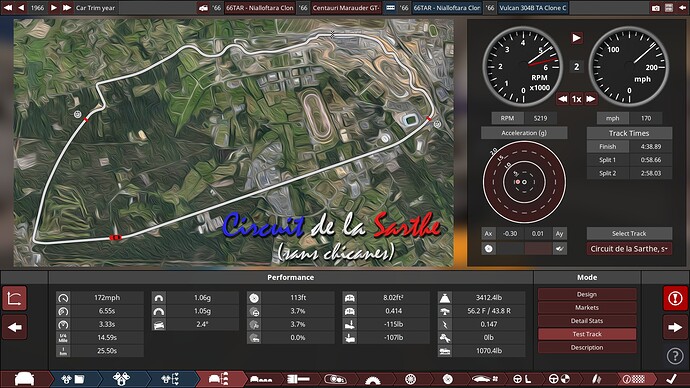 I forsee some tough competition this Le Mans. Perhaps NASCAR will compete for more than 1 year if such cars keep coming.