I picked it up from a great bloke and Citroen Car Club member today.

The XM is the last (and least successful) in the unbroken line of big Citroens. This XM is from the last full year of production and had the then-new ES9 V6 which would later appear in the Renault Clio V6, Peugeot 406 Coupé and (in highly boosted form) in the beautiful Venturi 300 Atlantique (pictured, just because… Wow!)

Earlier XMs usually had 4-cylinder petrol or diesel engines. An older 90 degree V6 was available as well but was not very popular.

There are two very cool things about this car, both of which were carried out by the seller over the last year or so.

Firstly, after the automatic gearbox packed in he replaced it with a manual transmission out of a Peugeot 406 which also shared this engine. He had a drive shaft custom made to fit.

It’s very unusual to find V6 XMs in the top Exclusive trim level with anything other than the fairly undesirable 3 or, later, 4 speed torque converter automatic. So this is a great bonus.

Secondly, he replaced the front and rear bumper, spoiler,
alloy wheels and the whole interior including the dash and seats to those of an earlier Series 1 car, so that it superficially resembles a 1989-94 car.

I already have a Series 1 1993 2.1TD XM in grey metallic, so it’s nice that I now have a (superficially at least!) matching pair.

Anyway, here are some pics! 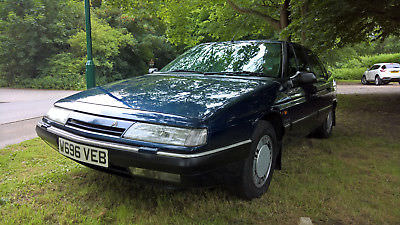 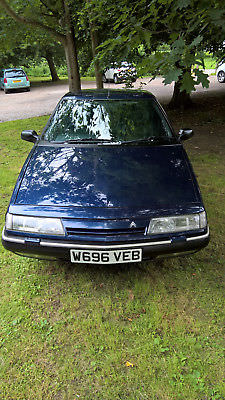 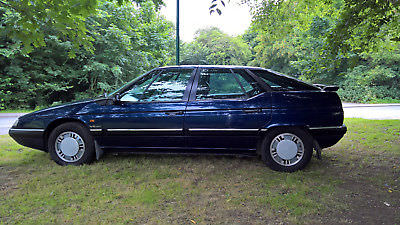 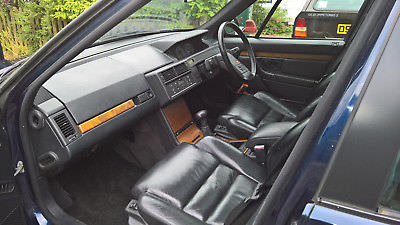 Lovely car, and on a W reg it certainly must be pretty damn rare. I’ve grown to love these old Citroens, the BX, XM etc. Are all so brilliantly well styled. Interesting that he decided to go as far as to change the interior, but I imagine the series 1 interior is much nicer.
I fully intend to own one of these one day, so keep us updated on how they behave!

The interior is actually the main thing they screwed up in the facelift, for me.

And here’s the facelift (yes, that’s literally how they left the factory)

It’s mostly down to the airbags and that awful wooden fascia on the curved dash. I love the older 1-spoke steering wheel, the cabin is actually a very spacious and airy place to be. The facelifted interior doesn’t suit the exterior and is oppressive thanks to hastily incorporated airbags etc.

XMs are great! I thoroughly recommend you try one. BXs as well. Saw some lovely examples at a Citroen car meet in Nottingham last weekend.

What a lovely XM you got there! They’re certainly great partners for long journeys, really wish I could ride in one to know it better. It’s the sort of car that must feel great, both as a driver and as a passenger.

Although it’s interesting to see the amount of effort put in by the previous owner to make the car look like a Series 1. It’s not usual to see that sort of thing in a neo-classic like the XM…
Personally, I like the Series 2’s exterior design more than the Series 1’s. Feels more refined, you know?

I explained in the post, the previous owner converted a S2 into a S1 lookalike!

Although you are correct, that picture of the interior was taken before the conversion to manual.

This is before I owned it, but it is the exact car!

There’s not much in it for me with the exterior to be honest. I slightly prefer the cars with more dark grey plastic trim, and I like the offset logo on the front… But there were some transitional cars that had more body coloured trims and mirrors, and they look great too.

I’d much prefer a S1 interior in a S2 exterior than the converse, all else being equal.

Saw some lovely examples at a Citroen car meet in Nottingham last weekend.

Ah, you were at the X rally? Although with multiple XMs, makes sense.

I missed it this year but feel like we have probably passed at other events, feel a small world moment coming on.

My last experience of an XM was a 2.1 SED which was lovely, but had a slight misfire and decided to stop doing headlights at night on a totally unlit country road which was ideal.

Do you ever head to any events further north? Not sure if I’ve seen the car about in the past but with the manual box and the ES9 with the better looks it has to be a winner.

I’d much prefer a S1 interior in a S2 exterior than the converse, all else being equal.

Same here. I think the place where the Series 2 interior failed was not making the dash wood-like, but wrapping everything including the gauge cluster with it.
If Citroën had kept the wood only below the cluster and towards the center console, it’d look much better… Also, the wood-like glovebox handle is plain silly, haha.

My dream XM would be a V6 Series 2 with these rims (because I don’t like the multi-spoke design the last XMs had); 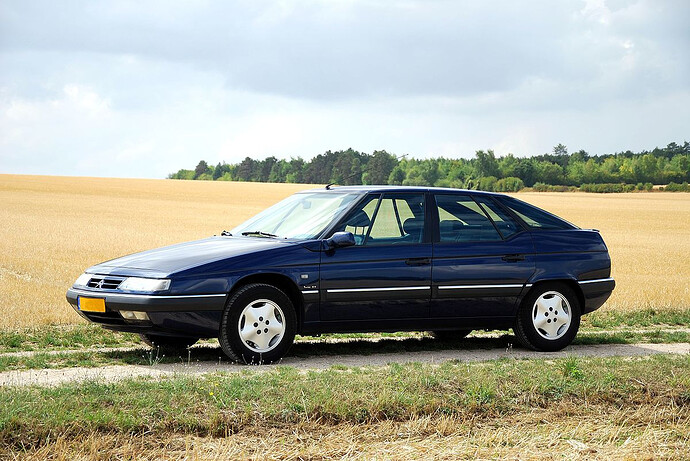 The cult of 80s luxury shall grow!

After getting a car of a similar age all I have to say is you’re lucky that interior is the way it is.

I’m not the biggest fan of those alloys - I like the ones I have on the blue car, but probably my favourite wheels are the bowling ball style hubcaps on my other car!

I also like these ones in the top right (bowling ball wheels are one to the left, and the ones I have on the blue car are too left) 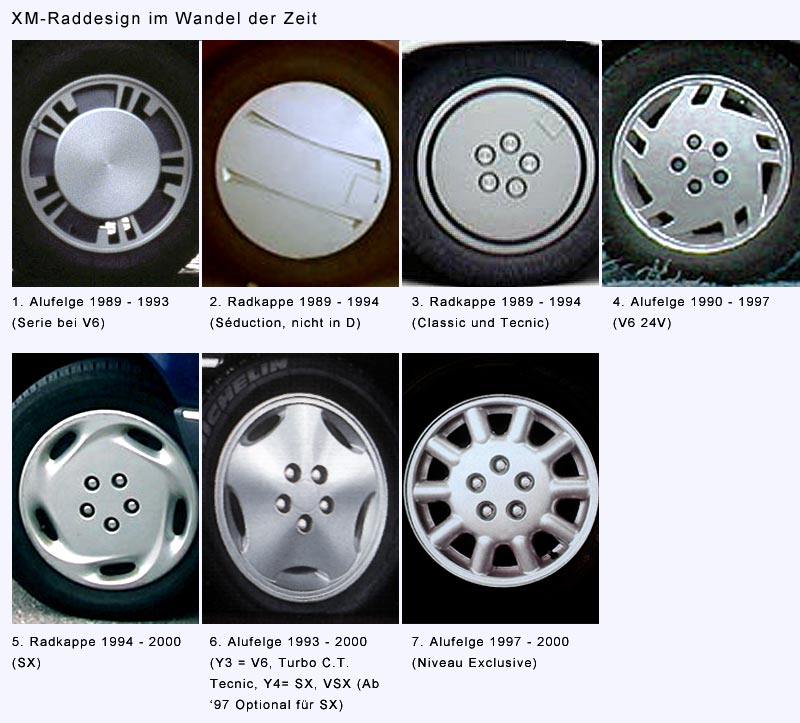 And these C6 alloys don’t look bad for larger rims, though I think these cars generally suit smaller wheels 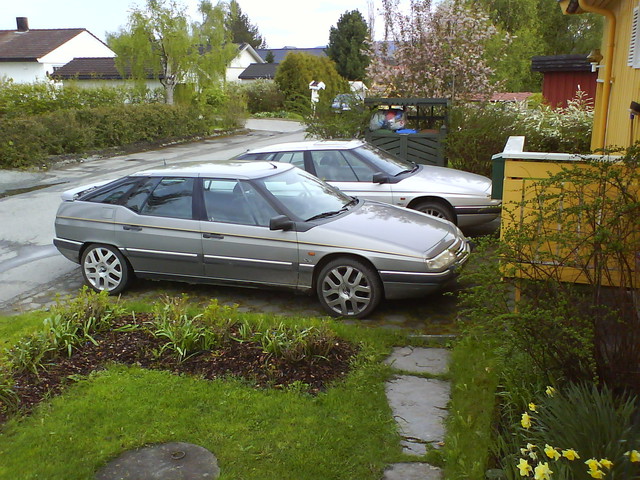 I definitely am lucky the interior is in such good shape, the quality of the leather is actually excellent. It all feels like an old Borg Morgensen sofa or something! There are a few hairline cracks in some if the wood fascia, but it actually appears to be solid cherry and has some nice figure to it.

My grandad used to have a BX, it was kinda cool

Yeah, same thing for me. It feels like the seat was lost it’s support. Guess after 30 ish years it just happens with 30 years of ass pressing down on a seat

I also like these ones in the top right (bowling ball wheels are one to the left, and the ones I have on the blue car are too left)

I see, the bowling ball rims are pretty nifty. I don’t hate the No.4 ones either, they suit the sporty edge of the XM’s design. But what are those No. 2 rims? They’re super '80s, even moreso than the bowling balls!

As for modern rims, I think they just don’t fit in with the rest of the design. Out of context they just look like cheap tuner pieces…

Yeah I agree, the newer wheels really age the rest of the car.

The #2 are a classic Citroen hubcap design! My Dad’s old BX estate had those on it so I’m quite nostalgic for them haha

The #2 are a classic Citroen hubcap design! My Dad’s old BX estate had those on it so I’m quite nostalgic for them haha

Really? I don’t recall seeing them throughout my car magazine and picture experience! Although I can certainly believe they could come with a BX, they’re as quirky as that car always was, haha.

I don’t recall seeing them on an XM, but have seen BXs and I think AXs with them on