So here’s the track! Credit for the original track of course go to @Der_Bayer (I hope you don’t mind me modifying it, if you prefer that I don’t, it can be taken down) and a special thanks to the amazing @strop, without his Fore GTi as the test car and his tips this wouldn’t have been possible.

Discard the sector 1 and 2 times, the sector 3 lap time is the flying lap. 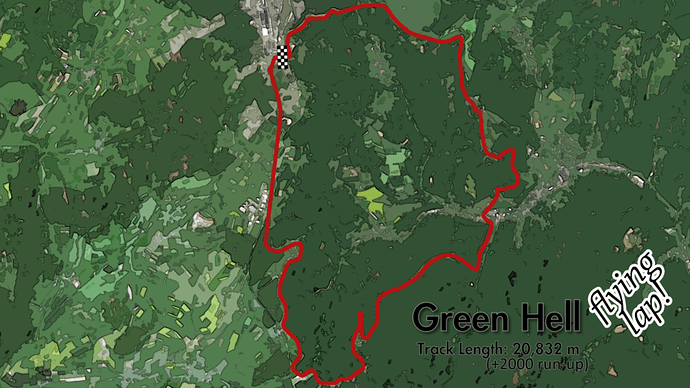 I don’t really see the point of this, the normal GH works fine

Well it’s not that it doesn’t work but quite a few people try to match IRL car lap times, taking @strop’s Armada Fore GTi as a case in point, so a standing lap (which is what the normal version is) won’t be good enough.

not necessarily, it depends on the circumstance and the tune. GH is actually one of the better tracks for times despite having a couple of weird spots (Flugplatz is too slow, imho).

This measure however is mainly for ultra sticklers (like myself) who notice that every modern timed lap of Nordschleife is flying and starts at T13. It does take off a couple of seconds from the time which, in certain competitive classes, means a lot.

I would like a GH with the GP part added, that would be cool

I would like a GH with the GP part added, that would be cool

That would have to be made seperately, but it’s doable (not very easily though. Sad.)

I know that I’m hella late but how do you make flying laps?

With this exact track. The rest is explained in the first post.