I know that eventually more off road options will be added, probably as an expansion after release. Here is some of my knowledge and observations on the subject.
Which is mostly rock crawling and general trail riding with a smattering of sand and mud. While I don’t claim to know everything, and there are several types of
off-roading each with either a slightly different, to completely different setup I am fairly experienced.

The main things for off roading are ground clearance and traction. Ground clearance is mostly gained by larger tires. I have been stuck often due to hanging up
on a rock because my tires are pretty small. 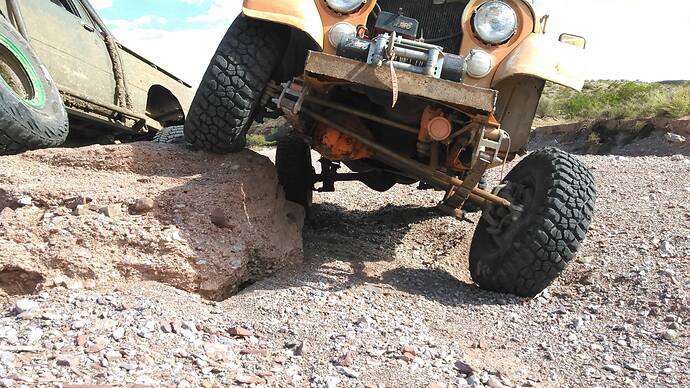 Ladder vs Unibody Frame: I have seen no difference in capability as far as unibody and ladder frame. Unibodies do tend to pop windows out shortly before the frame
starts to crack. And I have also had issues with cracking with box frames so its probably more of an issue with quality and the fact that we tend to push our rigs to the
limits. As far as cracks go a ladder frame is at least easier to fix.

Independent vs solid axle: There are some types of off-roading where independent suspension is best, but largely a solid axle will work out best. This is because when
one wheel goes up something like for instance a rock the spring or bump stop (usually in line with the spring) will act like a fulcrum and the axle acts like a lever pushing
the other tire down keeping it in contact with the ground longer. In rock crawling bump stops are often moved in towards the middle to give the tire going up more
leverage and forcing the other side down more.

Coil vs leaf springs: Even among off roaders there is no agreement, personally I feel that leaf springs can get better flex out of leaf springs, due to better down travel
(if only slightly). Coil springs often become unseated and can fall out of place when flexed to the limits where as leaf springs hold together. The advantage to coil
springs is they do definitely give a smoother ride. There is another suspension type which is a 4 link on a solid axle, I have only really seen those on dedicated off road
rigs, they can flex very well but take up a lot of room are complicated as far as getting all of the angles right (to keep it from binding) and can get pricy . There is a
link at the end that goes pretty in depth as far as coil-over shocks

Fat vs skinny tires: There are a few theories I have heard, skinny tires sink down to the bottom to get traction, provided they are tall enough, which I have seen work
with heavier rigs with mud and snow. On the other side light rigs tend to fair better with fatter tires which enable them to float on the surface which works best with
sand, and very deep mud and snow.

Power: Except for sand, mud and racing power is of little use. I can navigate most obstacles with only 5-10 horsepower, and have seen rigs with 4 cylinder engines
putting along at idle climbing nearly straight up. I have also seen many high powered rigs trying to climb a hill do nothing but break traction as soon as the climbing
gets difficult and do nothing but dig holes in the side of the hill, or simply shatter parts. I have had great luck with a wide low rpm torque curve often going down to
500 rpm without stalling.

Size: Small narrow rigs are easier to squeeze through tight places. It is not uncommon to see a small rig go between obstacles where a large rig has to climb over
them or perform multiple maneuvers to get through.

Thanks for sharing Zabhawkin, this information has clarified a number of areas which I didn’t understand about the art of off-roading.

Hopefully it’ll be as much of a help to the devs as it was for me!

I forgot a couple of things,

Brakes: You want good strong brakes that can hold no matter what. Each tire can easily wind up holding half of your rigs weight and you will want to be able to control that tire even when it is coming down a steep grade. My rig has at least twice the braking power that it had when it rolled out of the factory.

Thanks for the detailed descriptions and reasoning behind it.

Thanks for the detailed descriptions and reasoning behind it.

Does that include a solid front axle?!?!?!

Would a DeDion style front axle work on a offroader?

Does that include a solid front axle?!?!?!

Those will be added further down the line, definitely not in this subproject.

Would a DeDion style front axle work on a offroader?

It should, there have been some similar constructs with the axle shafts inside the tubes. It would depend entirely on how well it is made and if they payed attention to making sure it flexed properly.

A few observations on the current build 208

Personally I thing there should be little to no difference for tire width.

This is very well written.

It is true that you can often fit a slightly larger tire that is skinnier without rubbing, and height is always king (up until you start risking rolling)

Many of the newer off-road tires are designed with flex in mind.

Now for the part of the article I disagree with, which deals with tire flex (not to be confused with suspension flex) and tire pressure.
Yes a skinny tire at the same pressure will get a larger contact patch due to the tires stiffness.
A wider tire can be aired down to a lower pressure and still maintain the same height, I regularly see people go down to 5-10 psi without beadlocks.
With a lower pressure the wider tire will conform to single small object better.

Of course there is a environmental reason for wider tires too.
Wider tires (especially aired down) will compact the soil less, which leads to less erosion. I can often travel through a non technical low traveled section without hardly being able to see my tracks. (tread lightly)

Of course all of these arguments are probably moot (both sides) considering what tire widths are available in your generally available tire widths.
(12.5" max except for the high end performance specialty tires at 18")
According to the chart even with my light (3200lbs empty, topping 4000lbs loaded) rig I am running at the correct tire width for soft terrain at 10.5"/266mm at 31" tall, with plans to go 37" tall by 12.5"/317mm wide.

Edit to add: after looking at the chart more, and what the game favors, and thinking it over a decent model could be use the overlap between mixed terrain and soft surfaces as the optimal, then have a mild decrease on either side of that based on vehicle weight with a max of -1 or -2 at the extreme limits.

I noticed a nearly 5pt difference between monocoque and ladder frame.

In my experience considering how many Jeep Cherokees, and Grand Cherokees which are all monocoque (unibody in the US) frame we have running with us there is little to no difference in capability between the two. If anything the weight savings would be a slight bonus.

A couple of questions about the 1.5 idle torque calculation.

Does that also factor in weight?
Is it calculated with driveline losses?

If not it might be good to calculate it as a torque to weight ratio at the wheels in first gear (low range if that gets implemented).

Some thoughts on stability,

My rig has a center of mass at about 32 inches, and measures 30 inches from center of the body to the center of the tread. It has proven to be quite stable even though the stability triangle is just past 45degrees.

My plans would make it about 37 inches, possibly as low as 35 inches when I install the new engine.

I was thinking that even though it would be unlikely that there would be many bodies that would come close to going past 45 degrees that that might be the peak point for off road for center of mass to its width for stability purposes. Beyond that you loose capability because it increases the chances of tipping over too much.