Thank you to some modders, like Corvette6317, Sillyworld, Kubboz, partario and thecarlover for some helps, and latter for making thumbnails as well.
Note: The game has been updated to UE4 since 2017, however, my PC still runs on obsolete Windows XP since Kee times.
Update: I’m no longer made my mods on my own, though I can show car bodies I made, then sent those to developers or modders to add more variants (in some cases when I haven’t made other body styles), then add into the game if they have time.
I won’t take any requests, but car style suggestions are welcome.

So, you only have the blueprints/images set up, huh? (we can’t see them, btw, we don’t have the image files).
Well, it entirely depends on your skill, and on the complexity of the model.

Yes, I have setup the blueprint image already on the attached file.

Blueprint Link If you don’t have this image file.
Edit: I give up on this, as I have no skill and it’s too complex.

You might need some reference images to go with those. I mean, the blueprints are essential, but they can hide detail, especially when they’re not a complete front/side/rear/top set of images.

What you need to worry about, is the precise shape of front fascia (the fenders hide it from the side, and you need nice reference images for that. Also, the shape of the rear, (you’ll need to approximate to make the rear taper in correctly), and most importantly, the shape of the roof).

If you haven’t modeled a car before, you might want to start with something easier, especially if you only have a week.

There are tutorial videos on Youtube for making cars, and that’s what I used at first until I got comfortable with things. I’d recommend starting with something boxy and simple from the 60s, 70s, or 80s, since that will be easier to model. My first model was a Ford Econoline, and with a simple and flat front and rear, it wasn’t so bad to do.

This is the tutorial I used to get into modeling, and it’s actually pretty good and simple, and you can follow the same steps but with other car http://www.3dtotal.com/team/Tutorials/fiat500/fiat500.php

Also thecarlover is right, boxy designs are easier to get, although I’d say the car you want is more intermedium, and with patience you can finish it within a week.
As it was pointed out, you need to find (preferably) another set of blueprints that shows side, front, back and up, with the top down to get the shape right.

The car I started with (before I even worked for Automation) was an '84 Monte Carlo. And then, an Alfa Romeo 164. Both are something I’d recommend to a beginner.

And then I started making Automation cars, and made my own car, a '98 Felicia.

A Volvo 240 should be very easy also.

Here’s my progress (still very far from finish, so there was no release date yet) (notes: I’m very new to 3ds max, so my modeling isn’t so accurate, also my PC hadn’t been updated since 2012, that’s why my PC is running Windows XP) and what’s next?
Update: This is just a trial. 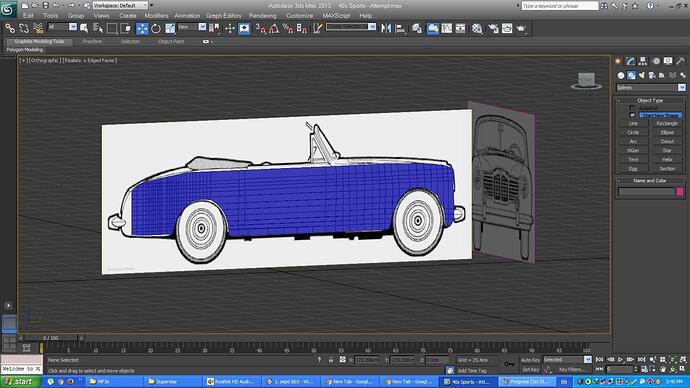 Well, you model the rest of the body

OK, but in the meantime, I switched to late 40s/early 50s compact sedan. Any further on the hood modeling and detailing the car?, because it’s quite hard to do on the headlights.
Update: This is just an experimental skill. 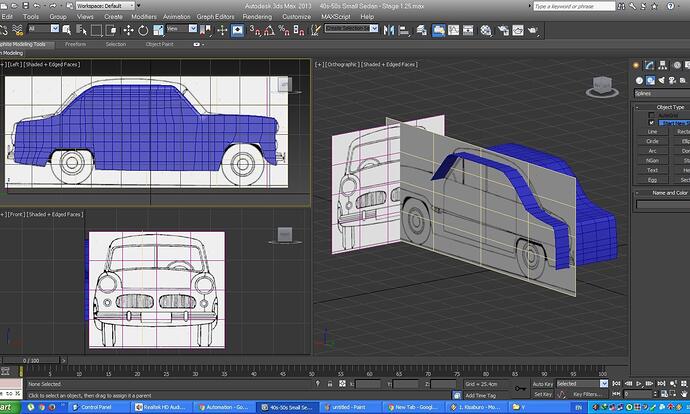 Change the transparency to 0.5 to help you see through. A plane from above would help to do the roof and hood. Also, change the front plane to the middle so you can model the front more easily. It’s looking good

Progress Update: making the front, curved the roof and edited the side view of blueprint (now similar to 1949 Full-Size Ford, but I made in a compact size) (note: I mirrored the separated front part as a circle, while the front windshield and the hood (unfinished) are done by using side object, as I never done the modeling before, image taken from my aunt’s laptop I borrowed, so I’ve made on Windows 8.1 instead of Windows XP on my desktop PC)
(note 2: I may switch to 32-bit version later, as I accidentally downloaded 64-bit version, when I have the mesh done: still far away)
Update: This is just an experimental skill like previous post.

Check the tutorial videos of the dev YouTube channel. The doors, hood, and trunk have to be separate objects, while the rest is together. You also only make half the car, with the cut line exactly on x=0, as the game will do the mirroring. The videos will tell you everything you need to know assuming you can use the 3ds Max tools.

Here’s the first one: https://www.youtube.com/watch?v=dcoq52moiY8

26/4/2016 Status Update: Now I’m back to the university (as of 26/4), although I went back home again on 4/21 due to the university graduation. Currently, I installed a 3ds Max (32-Bit) with Kajira Exporter and Outliner on the borrowed laptop from my aunt.

Project Updates: The 40s Sports and 50s Compact Sedan were cancelled, but I replaced these two new projects.
80s Aerodynamic Mid-Size (previously cancelled) and 80s Executive Car, since they’re easier to do.

Ooh that sounds good, I’d really like an aerodynamic midsize

Project Updates: The 40s Sports and 50s Compact Sedan were cancelled, but I replaced these two new projects.80s Aerodynamic Mid-Size (previously cancelled) and 80s Executive Car, since they’re easier to do.

I don’t want to un-encourage you, but you should avoid cancelling projects because they’re too difficult, otherwise, you’ll end up with a lot half baked projects and probably demotivated due to not being able to finish a project.

What I mean is this: let’s say that you can only do modeling on a limited time a single day every month, then it’ll be easier to finish a body if you work on the same body instead of starting a new project every month.

Not that you should devote yourself to modeling night and day, as must of us, I understand you have a life with obligations and different activities, and sometimes when we got a break from all of that we just wish to spend the time doing other stuff or being with other people, and that’s ok