A few years ago I made a tuning spreadsheet for Gran Turismo that people seemed to like, so I thought I’d give this a shot. After guzzling energy drinks until 5 AM last night, I somehow came up with this monstrosity: 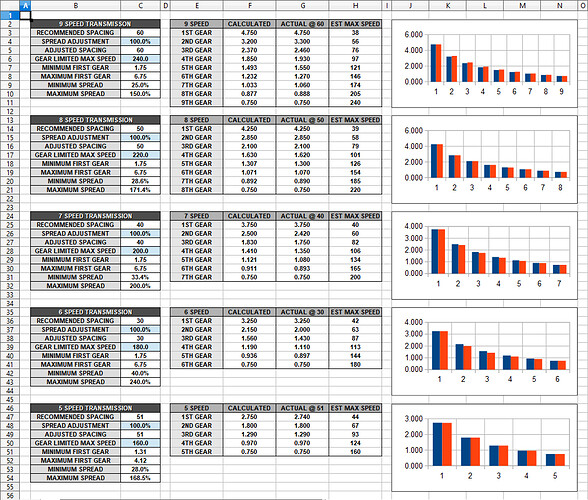 All transmissions have a top gear of 0.750, which actually makes this a hell of lot easier having one fixed gear to base all the other calculations around. Unfortunately, this is the only consistent thing about the gearing system. The closer you look at it, the the more the whole thing looks like a bit of a kludge, all due respect to the devs. (You guys are awesome, really.)

There seems to be two “groups” of transmissions. The first group, consisting of six, seven, eight and nine speed transmissions, all have the same available spread with a first gear range from 1.75 to 6.75. Why? No idea. The problem with this is that at the default spread of 50, only the eight speed transmission has what I would consider an “ideal” spread. The nine speed is too close, the seven speed is too wide, and the six speed is way too wide. Totally inconsistent results based solely on how many gears you have.

The second group of transmissions, with two, three, four or five gears, actually have individual spread ranges, which is certainly a better solution. On the downside, I can find no discernable rhyme or reason for the spreads and they’re still pretty incongruent. At a spread of 50 the four and five speeds are pretty good, but both the two and three speeds are way off.

Also, I came up with a consistent formula to interpolate the middle gears between first and top gears. Sometimes this matches almost exactly with the Automation gears, such as with five and eight speed transmissions. Nine, seven and six speeds conform much less closely, again highlighting inconsistencies with how Automation handles calculations for each transmission. Not really a big deal, just something I find interesting.

After a bunch of trial and error, I think I’ve calculated a set of ideal baseline spreads for each transmission to correct for these deviations as best as possible. Just to be clear, I’m not saying these settings will give you the fastest lap time or the quickest quarter mile. But I think if you start your gear tuning with these you’ll get much closer right off the bat and save time in the long run.

Of course, this does not take into account if you’re building a 660 cc Kei car or a twin turbo V12 suicide machine. If you’re getting excessive wheelspin, reduce the spread. If your car needs help getting off the line, increase it.

If you’d like to play around with the spreadsheet, download it here. I recommend using Open Office. Let me know if you have any questions or suggestions.

15 Likes
Yes, this could benefit from a higher shift point though. We do need customizable gear ratios
Hshan 8 February 2021 10:50 #2

One thing in particular I don’t get is what makes those exact spreads “ideal”, especially since I’m used to getting the best results with quite different spacings.

Good question, I’ll try to clarify. I’ve written a formula which generates gear sets in a consistent manner, regardless of how many gears the transmission has. An earlier version of this formula has worked well for me, and others, in GT. Comparing these sets with the Automation sets shows wild variations in the way Automation handles gear ratios for different transmissions. These baselines are “ideal” in that they correct for these variations and give you a level playing field to start tuning from. I have built a spread adjustment variable into the spreadsheet in case anyone wants help dialing in these numbers for a particular vehicle. If your system works better for you, I won’t try to convince you otherwise, but I thought some people might find it useful.

Thanks, so no fancy theory behind that, just pure practical experience. I appreciate that

Is this for the campaign mode or for racing in the BRC?

I haven’t used it for either of those, but I don’t see why it wouldn’t apply for setting up any car for any purpose.