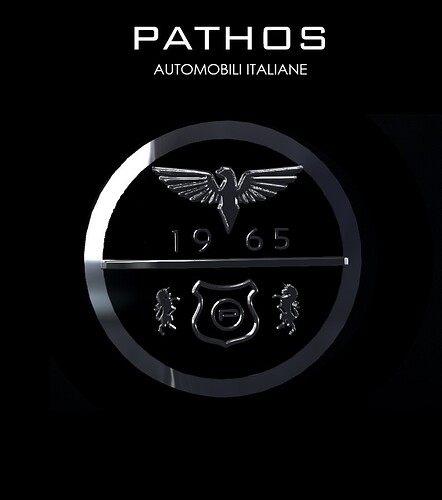 
Established in Monza and founded by Flavio Cavalieri (1919 - 2007) in 1965, Pathos started as a little factory which provided modified engines to the local Police and Carabinieri for their cars and chassis and bodies for the limited production prototypes which raced at the famous Autodromo, mostly commissioned by private teams. The "Officina Cavalieri" was renamed as Pathos, a few years after one of their clients said directly to Flavio how his creations' lines aroused "pathos", an ancient greek term used to express something very emotional.
In 1965, during a race at Monza, one of his racing prototypes, owned by a British team, crashed with great violence, and the pilot died. As a result, the team retired, and left Flavio a car, who decided to modifying it, making his own racing car, which was finshed, after a lot of reworking, in 1968, and ready to race by 1969. 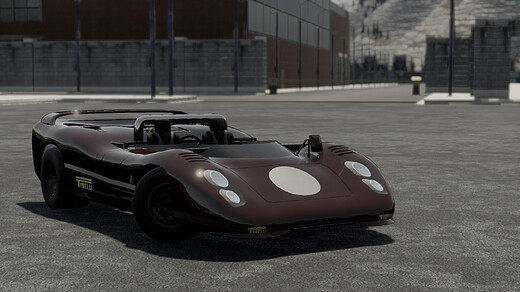 Photo231920×1080 587 KB
The Pathos AS3000 is known to be the very first car made by the Lombard car manufacturer, and hugely triumphed in the Group 6 cagegory in 1969-1971, in different variants. The years passed improving series production vehicles, making them more special, pushed Pathos in the 70s to produce more common cars: slightly more priced, Pathos's sedans and coupè fastly became the joining link between FIAT and Ferrari. The 80s were a pretty harsh period for high-performance cars, so the bigger 6, 8 and 12 cylinders engine used for the high-end cars, were replaced by the smaller and turbocharged 4 or 5 cylinders ones. The CS 2.0 was the car which made Pathos a pioneer in the Italian cars scenario, for being the first 5 cylinders turbocharged engine car ever produced in the Country. 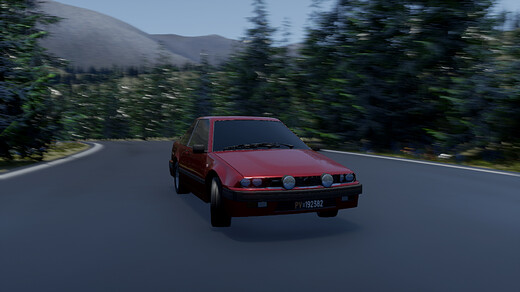 Photo221920×1080 492 KB
The Italian Quattro - as it was called - paved the way of a truly special engine, contributing to its fame across the 80s and the 90s. A dramatic crisis strike the brand in the last 90s, and FIAT proposed to buy it, in order to save it from the bankruputcy. But Cavalieri refused, seeing how badly Lancia was treated by the major Turinese brand in the last years. Flavio had to pay its pride with the closure of the factory in Monza, and lots of workers protested for the decision, which put at risk many families. Some years after, a company of Swiss financers, in 2003 signed a contract that marked its renaissance. In 2004 a new model has been presented in Geneva, where is the new headquartier of the factory. It was a big surprise to see the comeback of the legendary 5 cylinders on a Pathos for Flavio, which had the chance to see how missed it was. 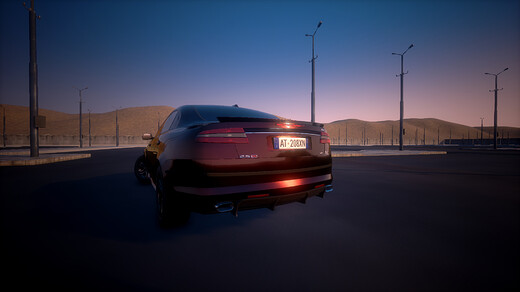 Photo201920×1080 279 KB
Unfortunately, Cavalieri had seen not even half of the success of the ES 2.5, because, at 88 years, the proud Italian pioneer passed away. Not many had the possibility to see its car brand born, dead, and reborn again, but Flavio could, and his spirit still lives through the Pathos brand and its cars.
9 Likes
abg7 13 June 2020 23:27 #2

That straight-five sounds sweet - and fusing two of them could lead to a V10 later on. 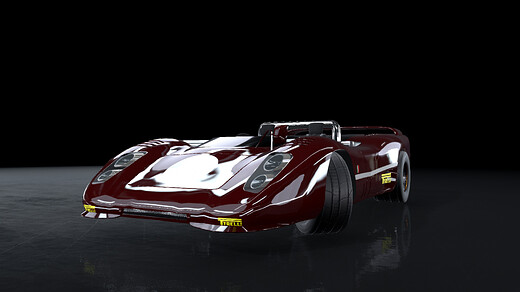 Photo251920×1080 305 KB
The years passed improving mass production cars for the Italian Police and Carabinieri, such as the Alfa Romeo Giuiletta, made the little Milanese "Officina Cavalieri" famous all around the Country. Private Teams which used to partecipate at Group 4 and 5 Championship started to entrust the difficult task of making their cars' engines more powerful by the end of 1963, working finely on little components without increasing the displacement, which was limited to 3 liters.
It was known that Flavio was working on a monocoque chassis during its very little free time, but most of his friends and customers thought that it wasn't something too serious. Many times had several discussion with the British private teams, trying to impose its own concept of racing car, whithout being listened. Sadly, years after the starting of the company, Cavalieri, during an interview, said that he preferred not to have reason about that tragic episode, happened in 1965, which involted the death of the pilot of the engish prototype car, while racing at the 1000km of Monza. The sad event pushed the team to the withdrawal, and left Pathos the remaining car. That was the occasion for the great entrance into the world of competition, which required a huge amount of work, for a little factory as Pathos. 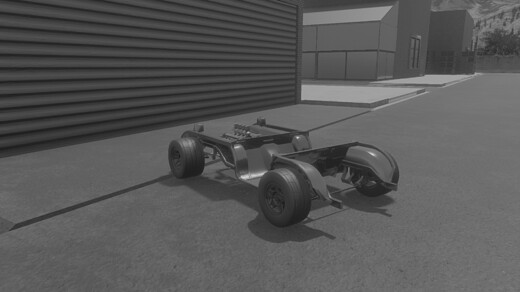 Photo271920×1080 414 KB
By August 1968 the chassis, taken by that British protype, was ready: it was exactely the proper one, designed by Cavalieri, but still, it was a good base where to work. The steel monocoque chassis was accompanied by an excellent 3 liters V8, capable of develop over 440 hp on its latest version. The bodywork had been made by glass fiber, which was very difficult to repair in case of accident, and its maintenance was tricky, but was the only solution in order to save weigth.
The entrance into the competions world has been harsh for the little pioneer car manufacturer, which was not taken seriously by most of the major teams such as Porsche and Ferrari; they had the chance to change their mind when the 25th April of 1969, during the 1000 Km of Monza, the AS3000 archieved the fastest lap. Compared the other opponents, the Pathos was very large, but this was a true advantage especially at Le Mans, when the newborn company triumphed over the actual queen of the Group 6 category: the Porsche 908.

However, thanks to the huge financial gap between the German Goliath and the Italian David, Porsche had the chance of placing more cars than Pathos, which had to save the little capitals left, hoping for the possibility of not breaking the car: this meant for their pilot not to keep the apex of performance for the hole GPs, especially endurance-wise. The 1000 km of the Nurburgring was an ordeal for the AS3000, and the more agile 908 left only the remaining bits of a difficult race. Despite the troubles, Cavaileri and its loyal team had the merit of not to surrender, and this meant becoming a true idol in Italy, the only car manufacturer competing in that category, after Ferrari started to abandon it, in order to concentrate in F1.
1970 was the year of the complete triumph, and the arrival of Pirelli sponsorship helped to provide the capital needed to further improve the car. The podiums were occupied only by Pathos, and the 908 saw it domain finished. 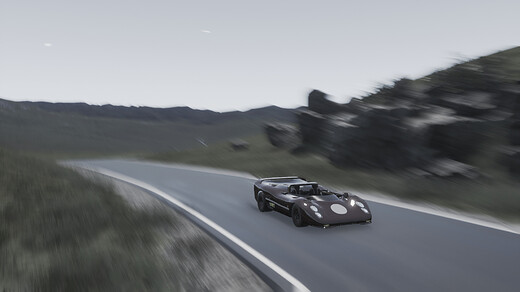 Ford, by the next day of the Targa Florio, disputed the 3rd may of 1970, started to put its eyes on the little company, seeing the chance of alongside its name to the little Lombard company one, in order to wipe out the name Ferrari once for all from the endurance and Group 6 and 7, which was already suffering against the competitors. The climb to fame was incredibly fast for Pathos, and yet it was time to look across the ocean. 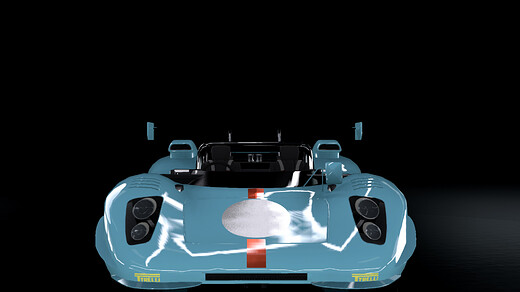 Photo331920×1080 237 KB
The aim of Ford was to use Pathos' potential for discourage Ferrari from continuing to partecipate racing; In fact, the American car factory was still angry about the 1964 events, and was determined to "take revenge against the presumption of Enzo Ferrari". The proposal was really tempting, and offered the occasion to dominate the CAN-AM Championship. Ford offered the possibility to widely increase the 3 liters V8, thanks to the very few limitations imposed in the Group. CAN-AM was a really interesting scenario which saw the maximum expression of innovation and concept of racing car taken to the highest levels, a very inspiring environment for Pathos. The collaboration with Ford, which lasted only 2 years for several reasons, allowed the creation of a proper missile, which mounted a 4,7 liters V8, derived from the "old" 3 liters, able to develop nearly 660 hp and 560 Nm of torque. This engine catapulted the car, equipped with the original body and chassis to over 395 km/h, which was far too dangerous, even for the insane standards of the American competition. 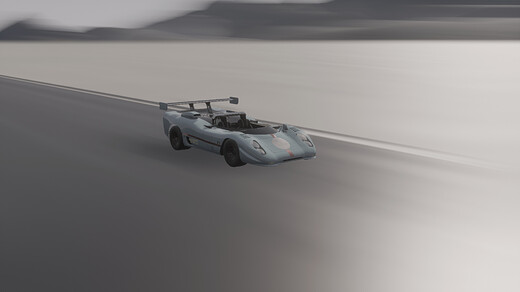 The stability, at those speeds, became a critical point, and the clean and aerodynamic lines were sacrified by adding a huge rear wing and new rear air intakes, instead of the NACA, helping a better air flow and the downforce. With those solutions, the top speed was reduced down to 381 km/h, but the agility saw big benefits. The Pathos-Ford AS4700-F outclassed the opponents, and had the chance to show the quality of an exceptionally good vehicle. The financial effort, result of the Italian and American collaboration, brought the first podium for an Italian racing team, after a long time 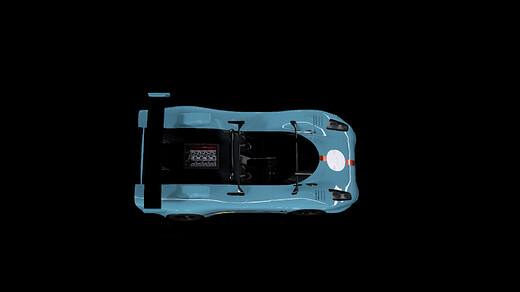 Thanks also the iconic Gulf livery, result of the collaboration, the AS4700-F had a huge visual impact, and soon became an idol, despite the overall patriotism that rounded the atmosphere. 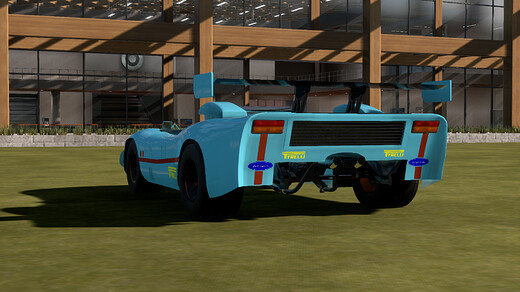 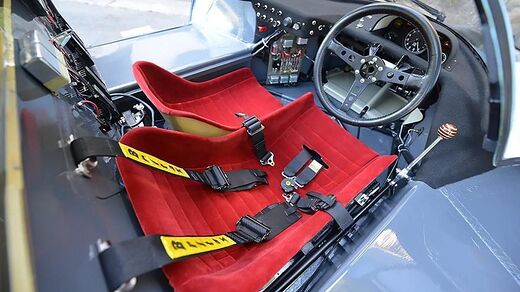 However, Ford’s influence started to being oppressive: the positive outcomes surely depended on Ford’s effort, but Cavalieri had a strong feel of independence, and in 1973 put and end to the partnership, leaving the Turbopanzer 917/30 take all the podiums. The AS4700-F is remembered to be the most successful Italian racing car that took part in CAN-AM, and also as on of the highest specific power/litre ratio vehicle, with 140 hp/litre, something extraordinary for the time 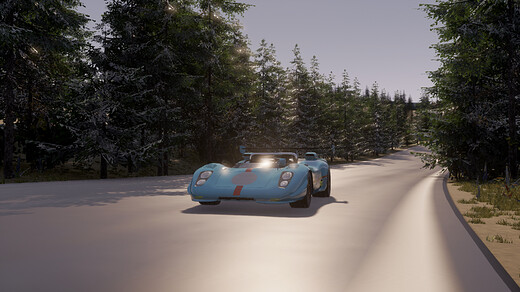