I didn’t think I’d manage it either, but I should focus on csr149 reviews now! Thank you for the kind words too! 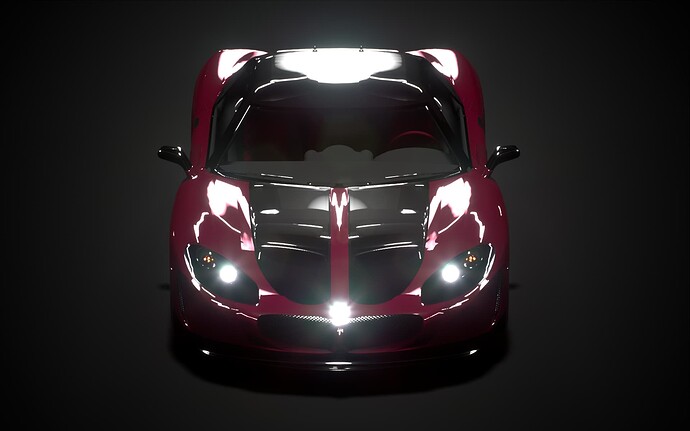 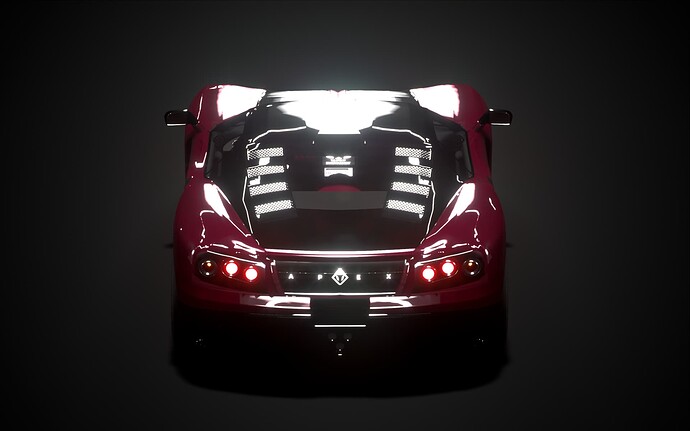 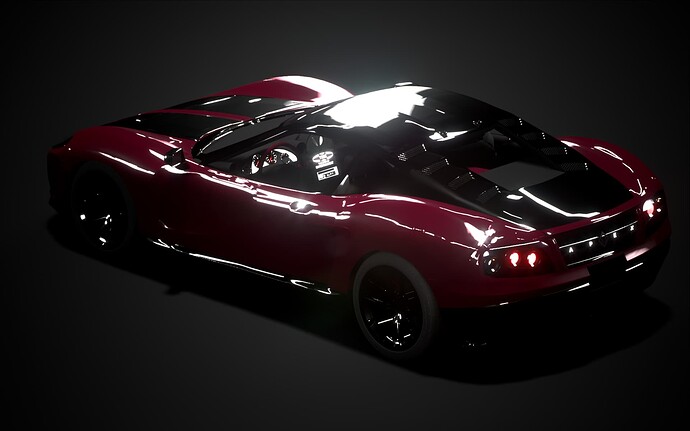 Well, it looks great, there’s no need to argue about it. I generally like the Porsche Macan and that’s why I’m excited about something like this. Yes, the prices for it are cosmic, of course, and that’s why I’m thinking about a used car. I would probably pay more only for the sport seats, keyless entry into the car, rear view camera, heated steering wheel, dynamic lighting system, navigation and ventilation of the front seats.

Some mighty fine cars in this competition

I got motivated waaaay late in the game and made mine yesterday. 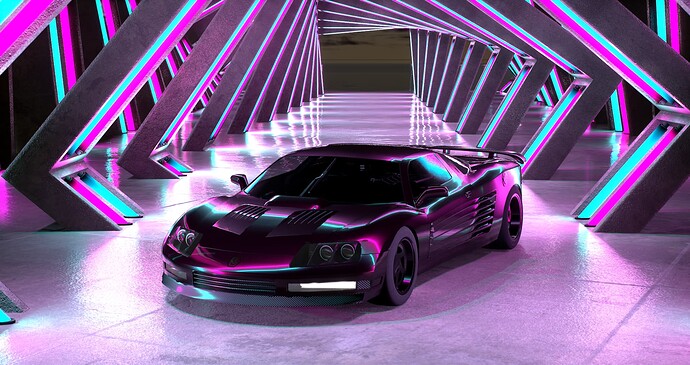 Do you want an Italian hypercar, or do you want an ITALIAN HYPERCAR? There’s a difference. If you just want the former, you can go to Fiat and their pet stable and ask for a carefully measured and balanced pony. If you want the latter, you’ll have to dig a little deeper. 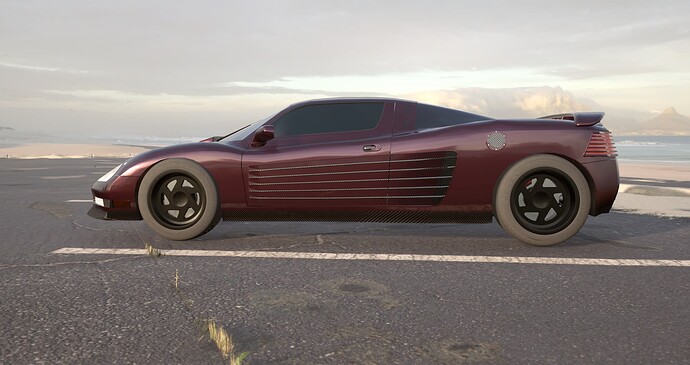 From the perpetually angry and passionate region of Southern Italy hails the Bizzarro automotive atelier. We do it the old-fashioned way: Chasing speed, consequences be damned. We lay up our CFRP body panels by hand; By God, your car will be unique one way or another. We don’t have the budget to design an entire new engine, just our unique 5-valve head designs - so to get maximum power, we slapped a couple of them atop a race-prepped aluminum 454 big block. We give you the most top-end navigation system possible - by contracting some big-name German electronics company to make one for us. 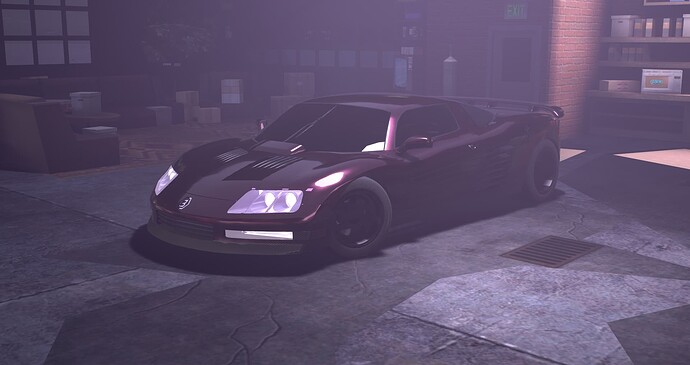 The GR-X is our latest and most insane car, with a current output of 730 horsepower from that GM-based engine (and yes, it chops a fair amount and sounds beautiful), and it’s good to reach the monstrous milestone of 400 kilometers an hour. That’s 249 mph for our most valued American customers. 0-60 is 3 seconds, quarter mile is 10.3, and 3280 feet is 17.8. The design language is meant to evoke past great Italian hypercars, because God knows the new ones look like melted cheese. We did go seriously, unironically all out on the car’s safety system - because you can’t buy another one if you’re a corpse. Downforce is a balanced affair, allowing you to reach the maddening aforementioned top speed while keeping tire grip steady at any pace. Finally, we at Bizzarro trust our customers - therefore, you get a real manual. No F1 flappies here, you control the whole car… God help you. 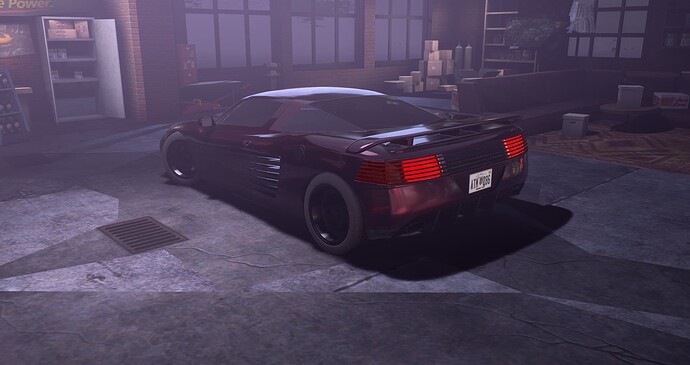 Well, I been driving all night, Devil by my side,
I used to call him Jekyll, now I call him Hyde.
Teeth like granite, fingers of gold,
Are we gettin’ ugly, or are we gettin’ old? 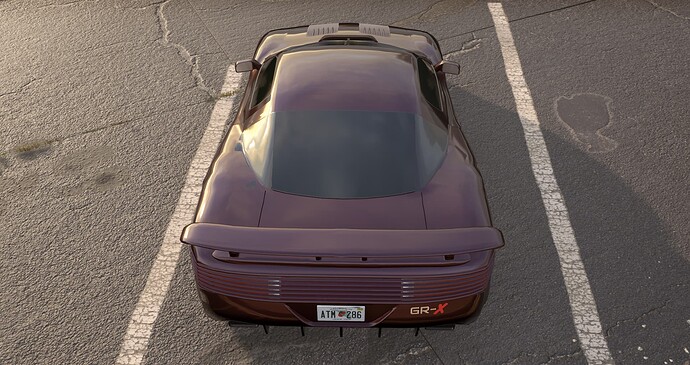 With an additional submission from @Texaslav 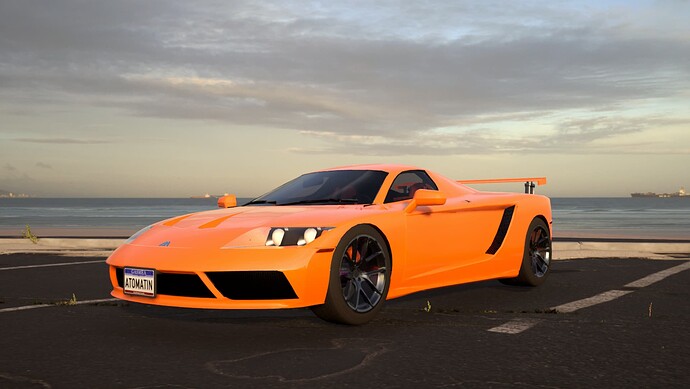 A very competent entry, with both good looks and performance. Despite being the only entry using multi port EFI when everything else uses direct injection, it is still able to hold its own with a quick 0-60 time and highest cornering Gs. (in a 3 way tie) One drawback however is the low drivability score most likely due to a manual transmission, but that doesn’t ruin it. 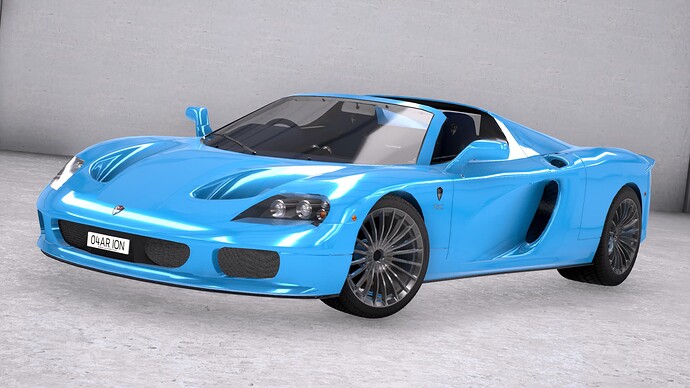 This car is extremely stupid in alot of ways and I love it. It is one of the best looking cars here, but the main attraction is the 9500 rpm screaming V16. Thanks to this engine, it has the highest prestige of the bunch by a longshot, with excellent stats everywhere else; the most surprising fact is this gets a whopping 36 mpg! However, this all came at a big cost (literally), being the least reliable and most expensive car here, with it maxxing out the budget. 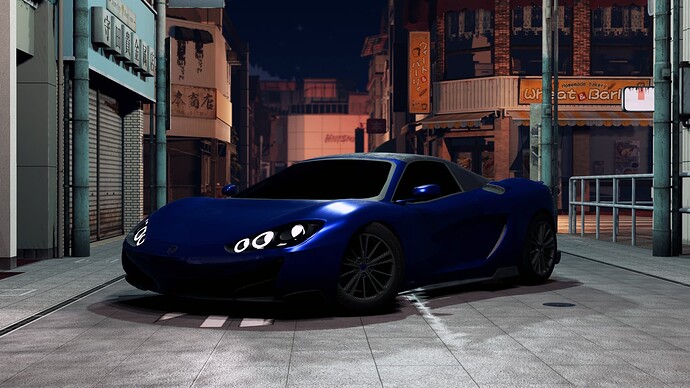 The Hyperion seems to have some LED headlights which don’t seem period correct, but other than that it looks fine. It is the fastest car here to go from 0-60 mph, doing so in 2.7 seconds. Thanks to this and the powerful 6.4 liter V10, it gets the 2nd highest prestige, but the time consequentially results in the lowest drivability of the bunch. 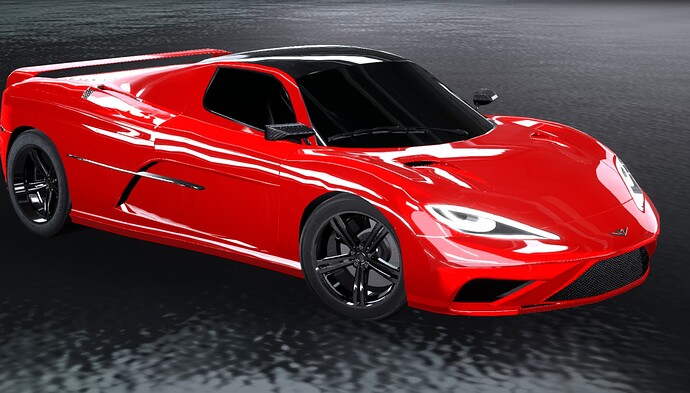 Hate to say it but… the SS2 really doesn’t have alot going for it. It has alot of bad engineering choices, including but not limited to: fiberglass body, automatic transmission and medium compound tires. As a result, it is the lowest scoring in 5 categories, plus it is unfourtanetly the worst looking car here. Most notable thing is despite it having the smallest and least powerful engine of the bunch, it still gets the worst fuel economy. It does have the highest drivability and lowest price tag, but neither of those are able to redeem it. 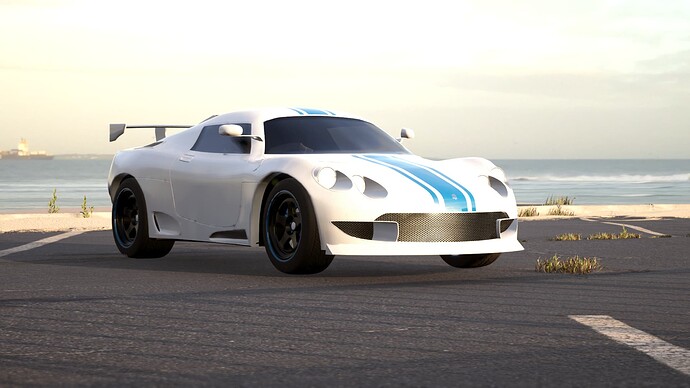 The AUTEX seems much more like a track car than prestigious supercar, and it shows in both looks and stats. It is the lightest car here and is the only one with AWD, giving it a quick 0-60 time of 2.9 seconds and a high sportiness value. The major drawbacks are the low cornering grip despite its light weight, low prestige due to a V6 powerplant, and worst of all: a dreadful comfort value of 9.6, far lower than any of the pack. 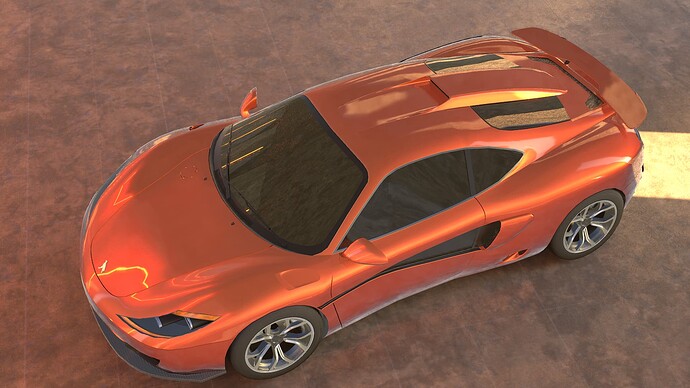 The SSC530 is a well rounded entry across the board, with the highest sportiness despite it being in the middle of the power range of all the entries, and having all around wishbone suspension opposed to pushrods. It also is the second of the grip tie. It looks pretty good too, sort of like a mid 2000s McLaren.

The TriStar is the best looking car of the bunch in my opinion, but it is unfourtanetly let down by its stats. It decided to go full grand tourer instead of supercar which means it has the highest comfort but lowest sportiness out of all the cars. Despite a relatively small 4.2 liter V8, its prestige score isn’t terrible thanks to the usage of the most expensive interior options avaliable, but this also ties it with the Arion for the worst reliability. The sportiness score still suffers due to the highest 0-60 time and lowest top speed. It would benefit alot from an undertray; it pretty much gives improvements to every stat. 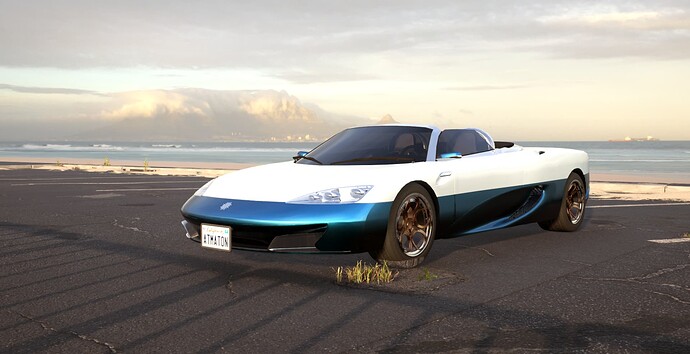 Greece might have just won the Euro Cup, but that is the exact opposite case with its own supercar. Firstly, it doesn’t use any carbon fiber in its construction in a segment where it is pretty much necessary, making it weigh almost 2 tons. It has a high top speed, but is one of 4 cars with a 3.6 second 0-60, the lowest here. It also suffers from low drivability and comfort, plus the Greek nationalism color scheme just looks odd. 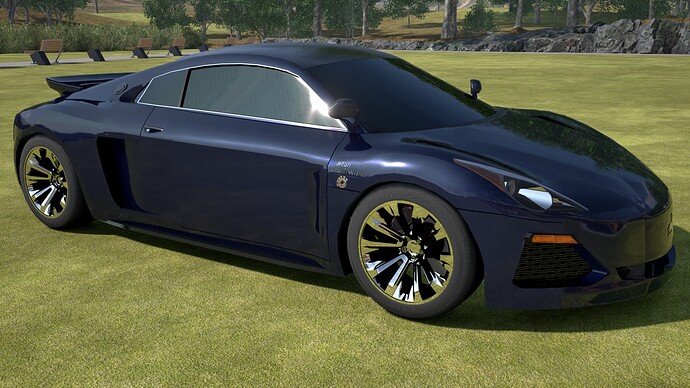 The Typhon looks fine for the most part, but it chose to be more conservative with is performance, which it shows with one of the lowest top speeds and acceleration. It has the 2nd best drivability score, but still falls behind in terms of other stats.

A true back to basics supercar, meant to evoke the times when CARS WERENT FILLED WITH THOSE FILTHY ELECTRIC DOO-DADS HNNNNNNGH. It shows this in both design, pulling off the 80s retro style before the Countach, and statistically, with great performance scores, terrible drivability, and the highest reliability of the submissions.

With all things considered, Scythe floored it off the dealer lot with his new 16 cylinder beast. 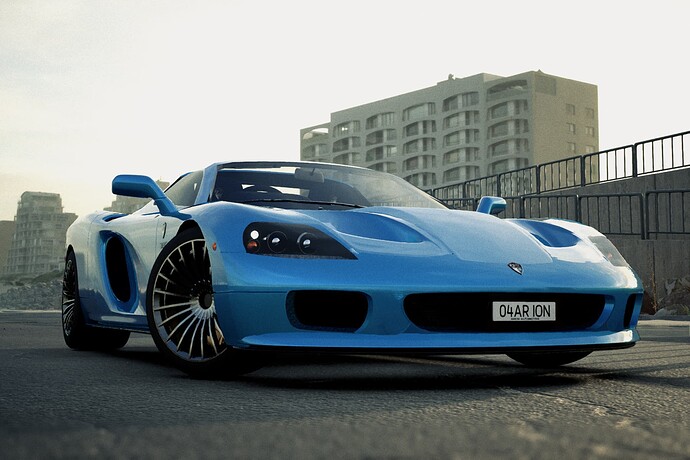 And as far as it being the worst looking car of the bunch…I appreciate your kind words.

To be fair it was a very tough competition, all cars looked cool

My engine was too small maybe(3.0 ttV10 making somewhere in the very low 400s) annnnnnndddddd I tuned the turbo by myself lol…bad move. Oh, and I thought fiberglass was cool to use in a supercar from that era, but I was wrong. At the last minute I wanted to make a bigger NA engine but starting the SS2 the day before the deadline and going 7hrs strong, I was burnt out lol.

I am indeed hosting the next QFC after all - just give me some time to come up with a suitable premise.

Well damn, I was really hoping to have this one. If I hadn’t decided against throwing in ESC, I very possibly would have. As ever, my desire to fit some automotive stereotype I like (in this case, the downright hazardous analog supercars of the day including the Carrera GT, the CC8S and Ford GT) got the best of me.

But congrats to Aruna! It took some serious confidence to go with that 16-cylinder, and I’m glad a configuration as radical as that was able to win overall.

What kind of engine exactly did you use to attain that output? Regardless, the dyno sheet shows it’s naturally aspirated, but I’m wagering it’s either a V10 or V12.

As for highest sportiness? It’s a modest 5.3L V10. For this project I “added lightness” and focused on overall attainable, usable performance. The car runs like a bat outta hell in Beam, especially on the Nur circuit. It’s only scary driving tendency is with full-manual esc mode, where the rear will step out with too much throttle, and it doesn’t want to come back as easily as other cars I’ve made.

As for pushrod suspension, it didn’t seem to fit the model year and price range.

I’ll take the highest sportiness credentials as a win on its own, and yes McLaren + Lotus + a little TVR was the inspiration. Thanks, great competition and beautiful cars.

Yeah that was a nice challenge ! Congrats to all of you !
Concerning LED headlights, they are period correct, since this technology started to be democratized in the 2000’s. I thought a little exoticism was right for this challenge. And yeah, 674 hp RWD, with a gearbox tuned for performance and not drivability, it’s intended to not be that drivable. (I am open to partnerships with funeral services XD)

@LS_Swapped_Rx-7 how was my suspension tuning? I feel as though I put some real effort in getting that right, so can you tell me how did I fare in that category?

And would my car not have been so bad in the 5 categories if my hp was on par with the rest of the competition?

Ill take the hit on fuel economy because I have no idea how to tune a turbo.