Recombining Trims into the same Models

I had exported a number of multi trim models to reimport them, and the game has imported them all as individual models. Is there a way to select multiple trims that are originally made as the same model and recombine them back as I had them before?

Do you mean…
Combining cloned models ?

It takes a long time, but it’s do-able.

Somewhat. I had about six or so models that each had between two to four trims that I exported to deal with an issue with Automation, but each trim ended up being exported as it’s own car file so when I reimported them, each one was made into it’s own model. I was wanted to either find a way or maybe suggest to have an option where if you selected two models that used the same body, you could combine them to make one model with two trims. I know that there is plenty of issues that could arise from that sort of option, but it would make dealing with what I have easier.

There should be the new way to do it that was introduced with the latest update.

If you export each car with the exact same name in the exporter it will place it under the first exported instance of that car. It then takes the trim name from the car in the game rather than what you named it in the exporter screen.

As per what Endfinity has said on the Automation discord. 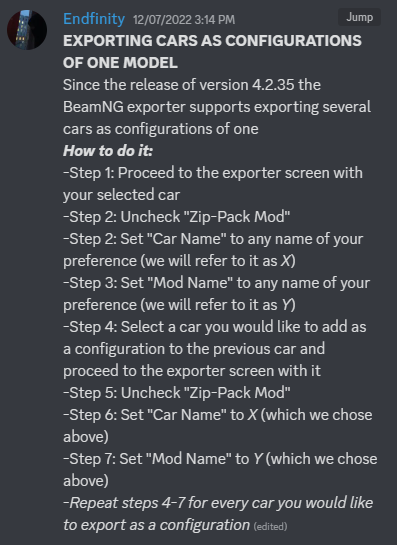 Maybe with an image I can help explain what I am after. 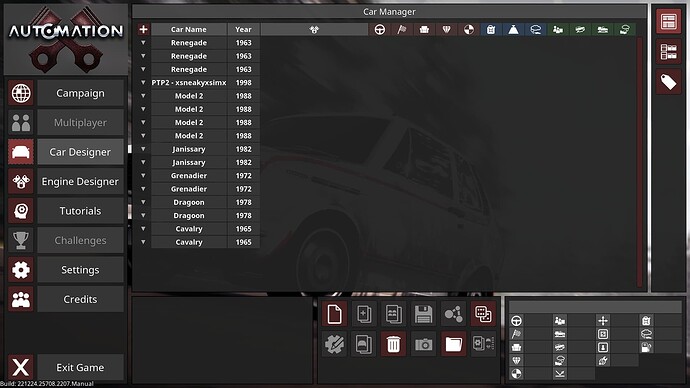 This is what my Automation Car Designer looks like now that I exported and reimported the .CAR files in Automation. What I am hoping to do is to have all the models that share the same name within Automation to be recombine back into the one model still in Automation.

Yeah, that’s why I made my suggestion. That’s how I fixed mine.

I’m just trying to work out what you are meaning with the ‘db file rename’ and ‘edit db keys’ from the other thread.