NOTE: This thread will most likely get some updates any time soon.

Reiko Walker Designs (shortened RWD) is a tuning house, inspired from Hennessey Performance Engineering (HPE). So far, I don’t have any ideas for the logos and stuff, but most likely I will post the models under the brand Reiko Walker Designs. 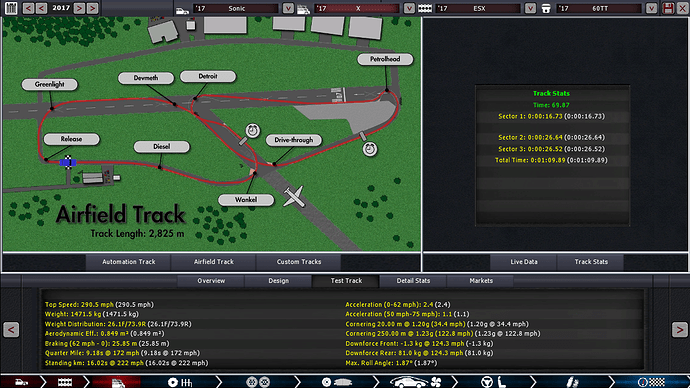 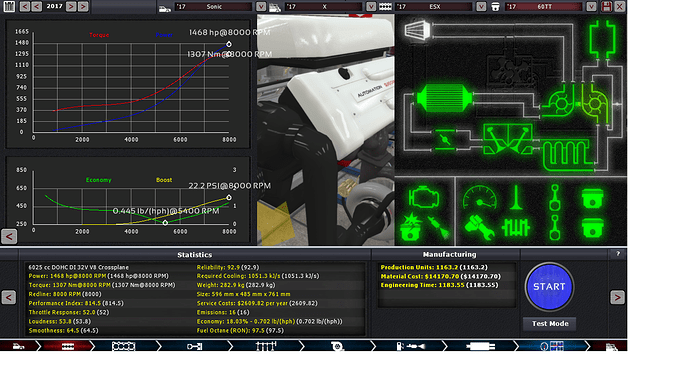 I notice your turbo hasn’t even finished boosting by the time it hits redline. You’d have a much more useful boost if both your compressor and turbine were quite a bit smaller! Of course when you do that you’d probably have to change the ignition timing and compression quite a bit, alteratively, you could actually reduce the wastegate opening pressures and keep the power somewhat controllable. With that you might have a car that’s easily as fast around the track but more drivable.

The looks are awesome, it’s the best part of this car, but the setup and engineering are lacking. You will find (like most of us did) at the time of entering these forums that “you know nothing, John Snow”, and will have to step up to the challenge of all the hypercars in these forums (and there are a LOT) It’s probably the most saturated market.

So, on the car - apart from the top speed, I do not see anything that can not be done with a car with roughly half the power, while using 0 quality tabs. Something you had fun with, considering your production units and total costs. Quality tabs add power and performance, sure, but they also can add weight, engineering time, production costs and all in all are a good way of people on the forum judging if the car is even remotely plausible.

Also as Strop said - your engine is cut off way before the turbo reaches full boost, and more so - it’s cut off it seems before it reaches full power. A higher RPM limiter will see to that problem easily, if you can deal with other problems arising from that. The boost is also something you don’t want a LOT of, since the torque curve. Well let’s just say - if you’re caught in that car by a 500hp super saloon, while you’re anywhere under 4k RPM, there’s a high chance that you’ll lose, at least till you find the gear you need to be in and get the boost going. The turbo is also the reason why you’re losing so much drivability, and this sort of turbocharged power output is the reason you have to destroy your aerodynamics for that 1000+ KJ of cooling.

In any case, keep it up, and try to improve on your builds, make them more efficient. If you can make an efficient build, then it will be easy to make it fast.

Thanks for those useful tips and the kudos, may give it a try for the future models I’m going to make. I really appreciate them

Hennessey you say? I built a Venom inspired vehicle some time ago if you’re interested, and that car while not causing a big splash on the forum, was I believe one of the fastest around. Would you like the car to see what’s what?

It is the fastest among the “lore cars”… for now

@TheAgathaNakai If you could post screenshots of some graphs (suspension, aero, brakes, gearbox) we could help more

Your car looks really good, but I’d say that with a drivability of 13 your car isn’t as fast it could be

Also both comments from strop and squidhead are really on point, but you’ll get there

I have yet only made one super car, but as you can see, you can accomplish a lot with less costs and production units.
A few more comments, try to lower the weight (light materials and negative quality on interior and safety might help), and don’t be afraid of losing some realiability by increasing your rev limit

The car has really nice futuristic styling and overall looks fast, just like it should. Good job!

About the engine… I mean, you could make the turbo smaller and all that jazz, but as we all know: less power = worse car. That’s why you should increase the rpm limit, so the turbo is able to boost to the limit. Yeah, the reliability will suffer and drivability will go down, but who cares when you have more power?

Would you like the car to see what’s what?

… yes…
I will totally use it to learn more, and not to have my ways tuning the hell out of the thing. I promise with my fingers crossed.

You want to tune a Hennesey Venom?