I don’t have the kinda skills needed to make decent tracks, or right now the time to learn. That said I know several of you are very good at it and I was wondering if someone here would be willing to give a go at making the Bathurst Mount Panorama Circuit?

I see a few different iterations of this track. Could you show an image of the track you’d like to see? If so, I can make one. It doesn’t look really complicated. I don’t want to make 5 different ones though.

The first image is what I’d like to see made.

Stupid question, but does the start/finish HAVE to be in the exact location? This track will have the same issue I ran into with Road Atlanta. It is a narrow facing front straight and to start it going right will make it tall and narrow, in other words, a very tiny map. If I start it AFTER turn 1, it will make a much nicer track, IMHO. 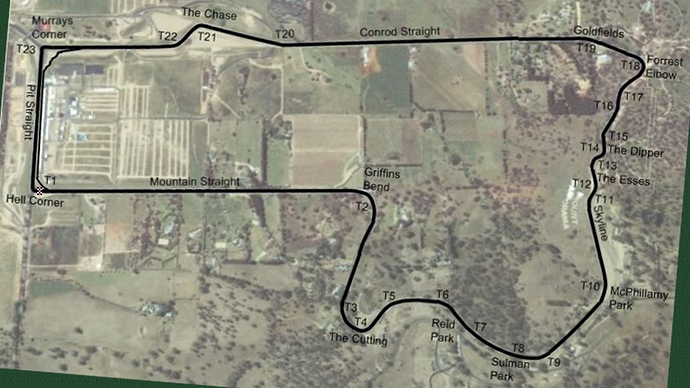 After an hour of tuning the turns from 18-on, this is the best I can do tonight. I will work on it more when I have some time. I don’t really know much about the track, so if you have any line suggestions, feel free to post them up.

you could just turn the track 90% ccw you know

Then you can put the starting spot at the accurate spot. Besides, where the lap starts or ends can influence (non-rolling) lap times.

Just for you, Dragawn. Problem with tiny maps is making precise turns. It is also a strain on my older eyes to see where it needs to go next. But here is rotated 90* ccw. The scale is not right (5176m vs. 6213m actual), but I’m not doing it again on this tiny map. 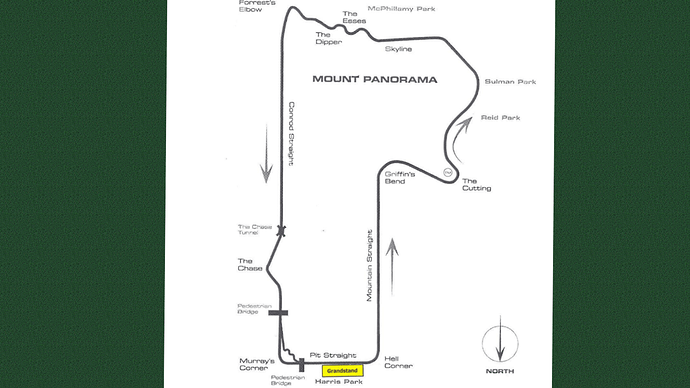 Thanks for your work! I’m training for a new job so my hours are even longer than normal but I hope to give this a try tonight.

The trick to this track is getting the elevation right. Modeling it just from an overhead view won’t really capture it at all.

From the start line up to Turn 10, it rises about 490ft, then descends along the ridge line to T18 at ~+280ft, and then rapidly dives down Conrod straight, getting back to near datum (~+80ft) about halfway down conrod, and then gradually desceding the rest of the way back home.

[quote=“Tyler”]The trick to this track is getting the elevation right. Modeling it just from an overhead view won’t really capture it at all.

From the start line up to Turn 10, it rises about 490ft, then descends along the ridge line to T18 at ~+280ft, and then rapidly dives down Conrod straight, getting back to near datum (~+80ft) about halfway down conrod, and then gradually desceding the rest of the way back home.[/quote]

I used the image provided by the OP for elevation changes in the “slope” characteristics, which is pretty much just what you said.

With 07CobaltGirl’s permission, I’ve retuned the version of the track with the correct starting place. Being Australian, this track is extra special to me, so I was really keen to match corner speeds, cambers and elevation changes (including the big dip on Mountain Straight) with an equivalent car during a race, meaning I had to match the racing line. Fortunately, again being Australian, I’ve dialed up hundreds of laps across various sims, and chanced upon this great example lap by Craig Lowndes back in 2007, which demonstrates race pace (not qualifying pace, which is about 4 seconds faster).

EDIT: Thanks to fixing the scale, version with proper 6213m track length now uploaded! The change to time is minimal, and the corner speeds are about 1% faster, so time is made up going faster on the straights such that the track is overall only about 0.4% slower.

I could probably give you some tips on how to fix the scale.

That would be great! (I kind of have an idea of my own, but being the queen of track building, you probably have something smarter figured out). My main worry is that fixing the scale so the track length is correct is going to throw the times and corner speeds off, which is my priority!

[size=85]For example, I notice that Der Bayer’s Green Hell, which simulates very accurate times, actually measures about 80m short on the Automation testing scale too, at least, if the way I figured it out is correct.[/size]

80 meters on The Green Hell? That is about 0.4%… I’d call that pretty close to perfect.

I know this is an INCREDIBLY OLD thread but I was just wondering if either of you (CobaltGirl07 or Strop) were planning on updating your Bathurst tracks. Using trackedit 0.14, I made my own (which ended up with skyline being 10m lower than real), but you two are much better at this stuff than most people.

I would, but has it gone out of date? I actually haven’t tested it yet, so if you had any pointers on where it’s out that’s help.

But if not I’ll just check it over down the track.

Trackedit shows both tracks to finish below start height. Struggling to find a way to say that nicely

Oh yes that. That’ll be due to the way the angles were calculated, in actual fact just about every course is now very off. That’s something I can fix fairly easily and may do so when I get back.

It’s Pike’s Peak that I’m dreading fixing. I was actually going to wait until the next major update to see if anything had changed and therefore whether I needed to further change the characteristics of the course.

In that case, forget I said anything.