Because I don’t do reasonable things anyways and making silly things is fun. Where’d we be if we all took it serious heh.

So I tried making a 660cc turd with at least somewhat decent economy ratings and utterly failed, but I am just trying to imagine driving a turd like that would be like. Kinda feels like something some no-name production from the middle of nowhere China would come up with. Obviously had to have a turbo, because what’s not improved by that xD 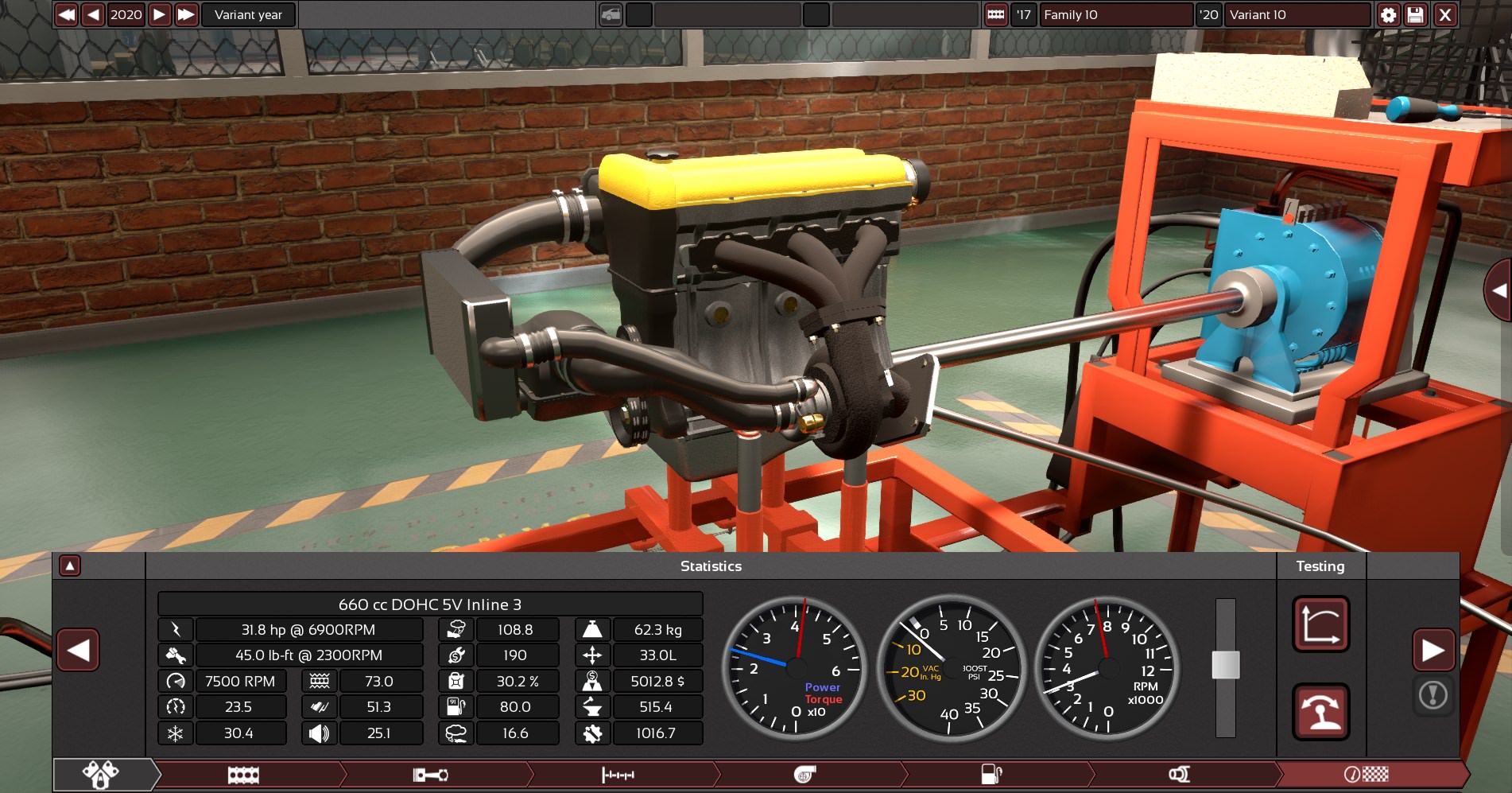 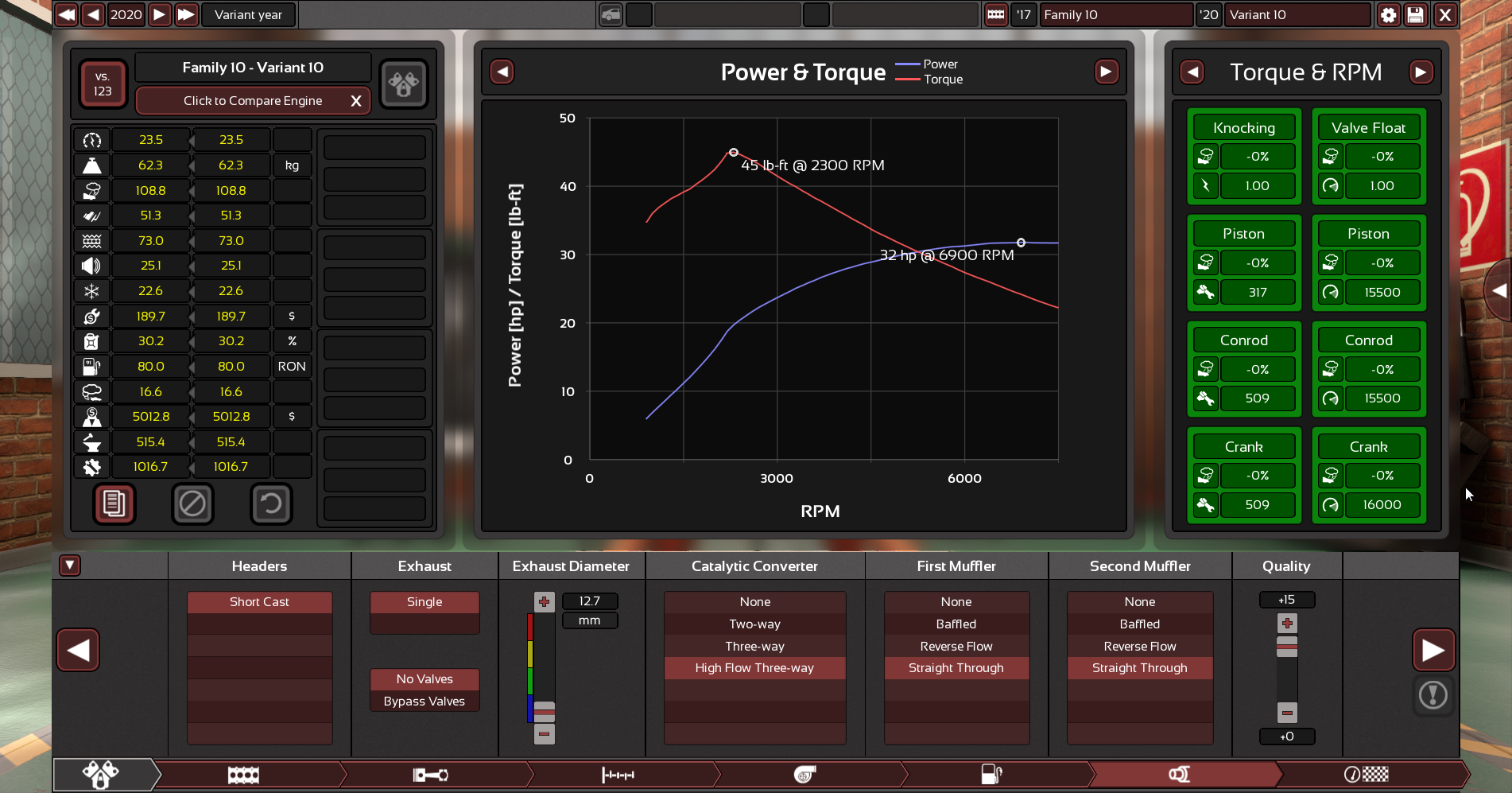 Next on the list something I like to do whenever an update comes out, because well no real reason I just like to tweak for hours. Plus I am a fan of extremes and it don’t get more extreme than extreme performance. Well no, actually there are extreme things that are much more fun, but they don’t tend to explode quite so spectacularly amirite. 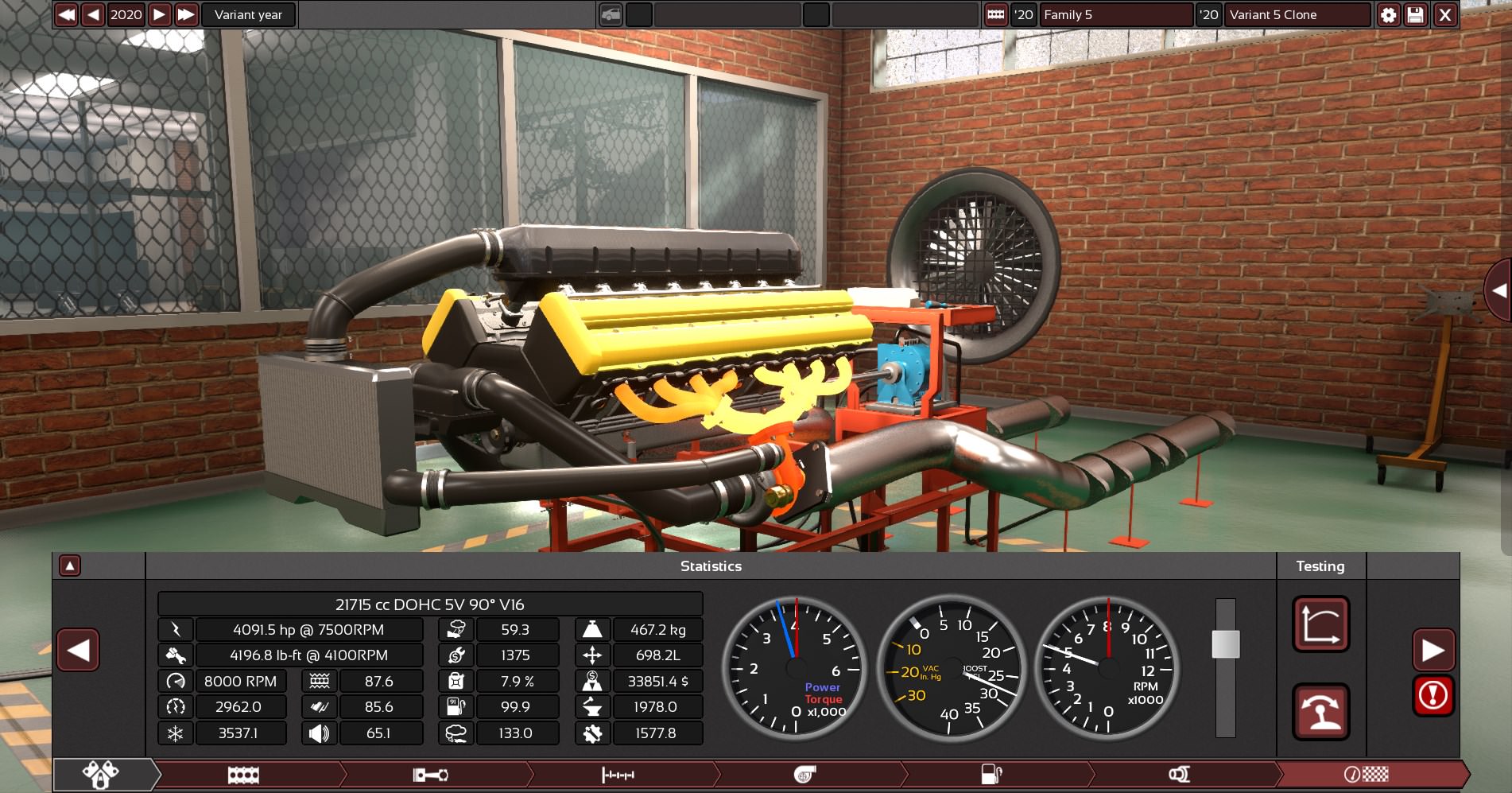 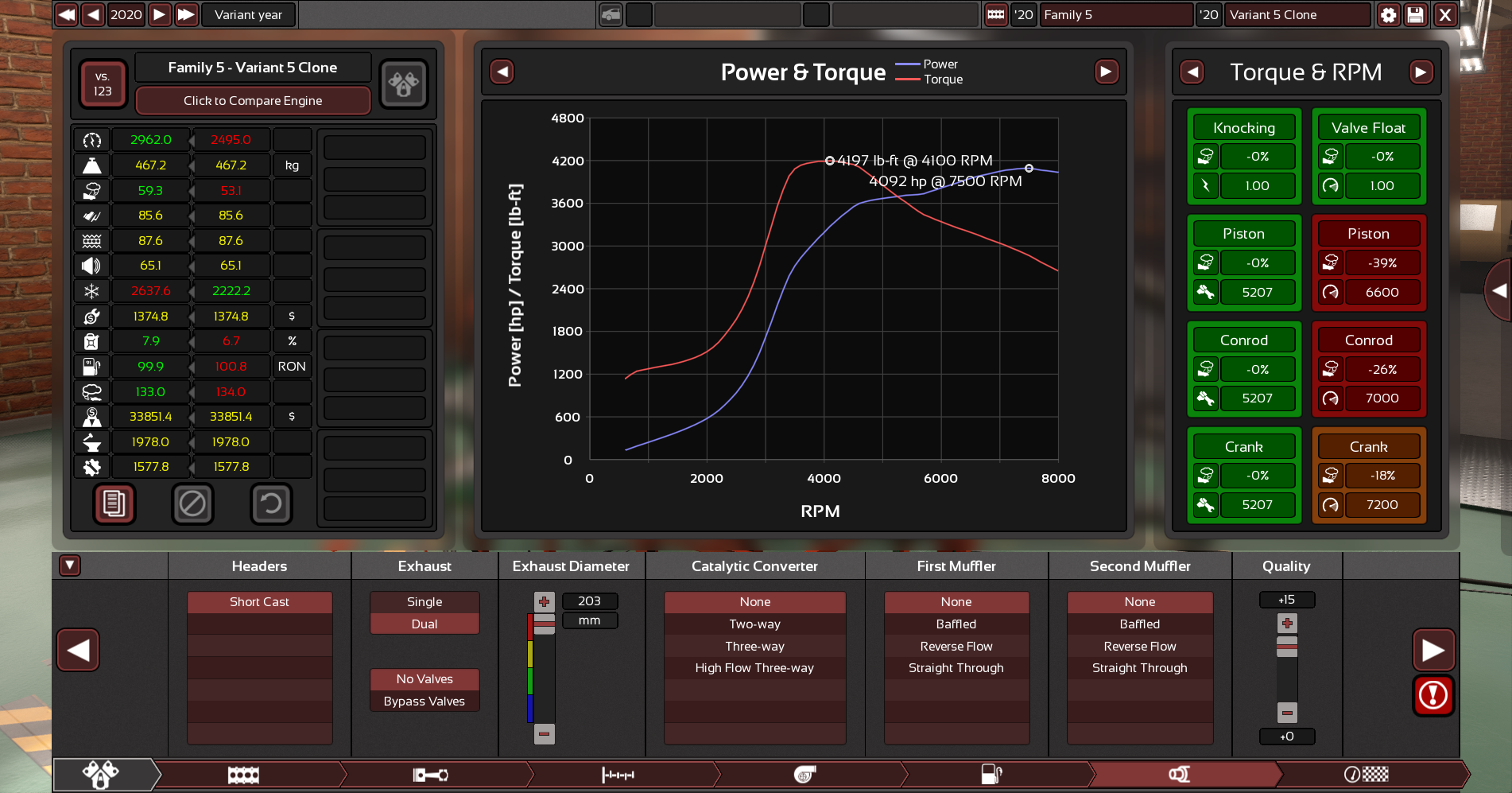 I’m somewhat curious in regards to what the theoretical ceiling actually is in terms of power and torque. I’m sure with a bit more trickery it could go beyond 4100HP. Before someone says something about practical blah blah, engine like that I’d put in a boat, maybe two of them and try to smuggle some cigars out from Cuba without the feds catching me hehe
Now all that’s needed is a nice big Supercharger and hello 6000HP xD

I really do feel like there is a pattern developing when it comes to me and making small I3s. Pattern being I seem to not know what I am doing. Mainly exhausts are either broken or I don’t understand what backpressure is supposed to be, jk
But really why this wants so much diameter is beyond me <.< >.> …worse than my last girlfriend 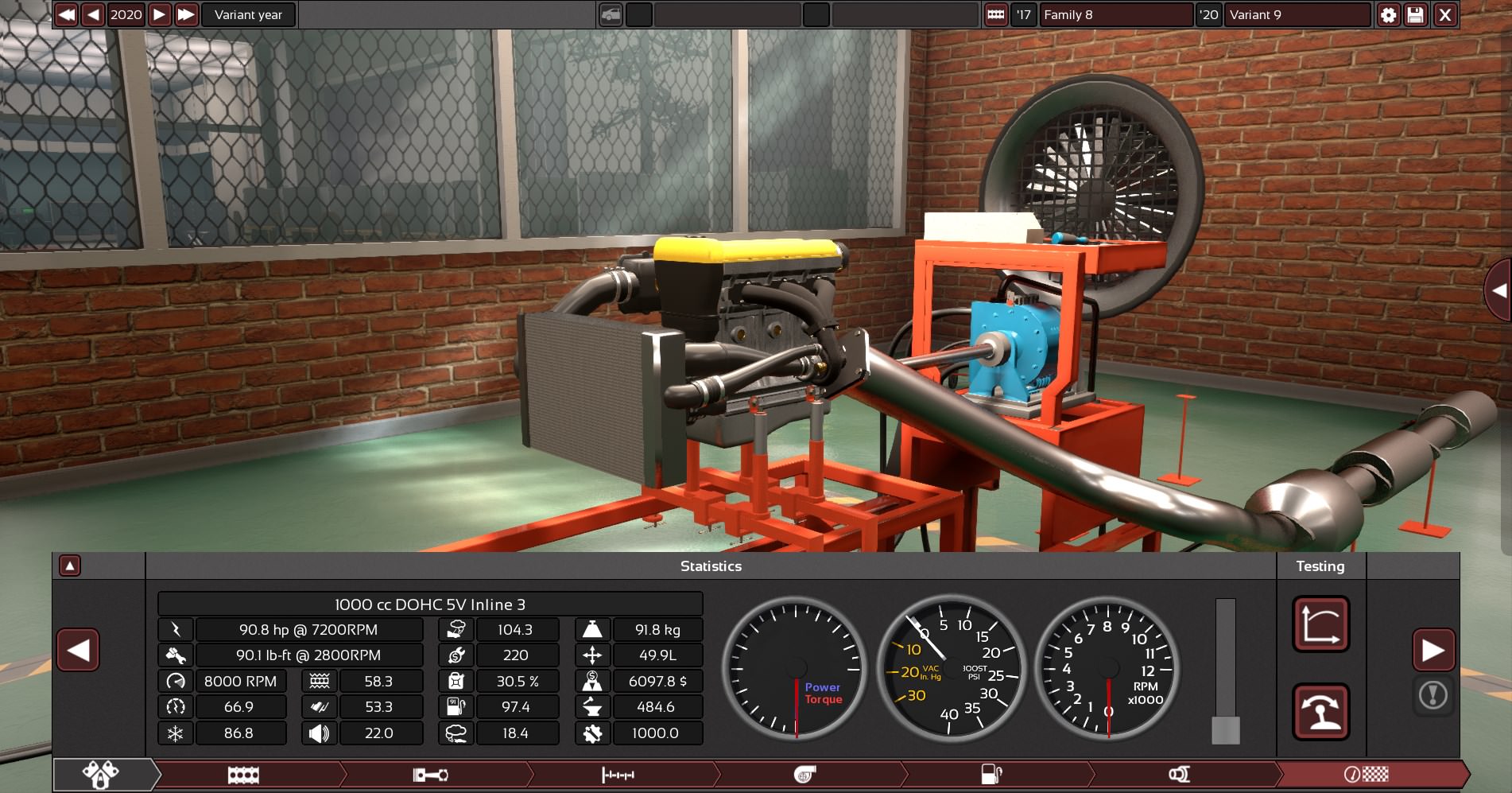 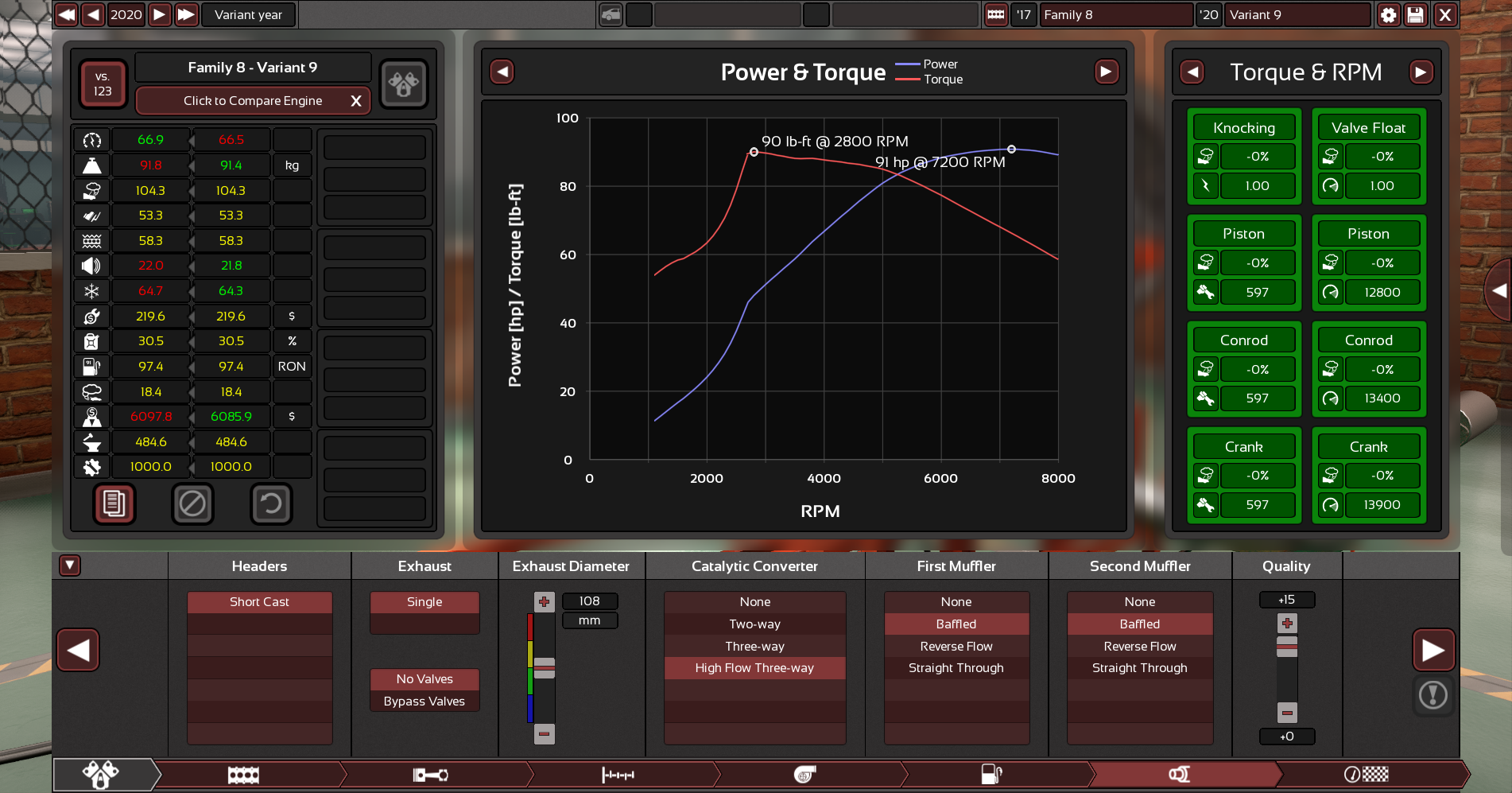 Do we actually still have 50% efficiency rated engines since the engine-upgrade? Bigger question is how much power and torque does that eat? Can’t be the only one that feels like the laws of physics just hate combustion engines don’t they.

Someone once said “Let there be boost” and there was… boost, well of course. This whole idea of marine engines is actually rather interesting. So let’s take this concept to the extreme. 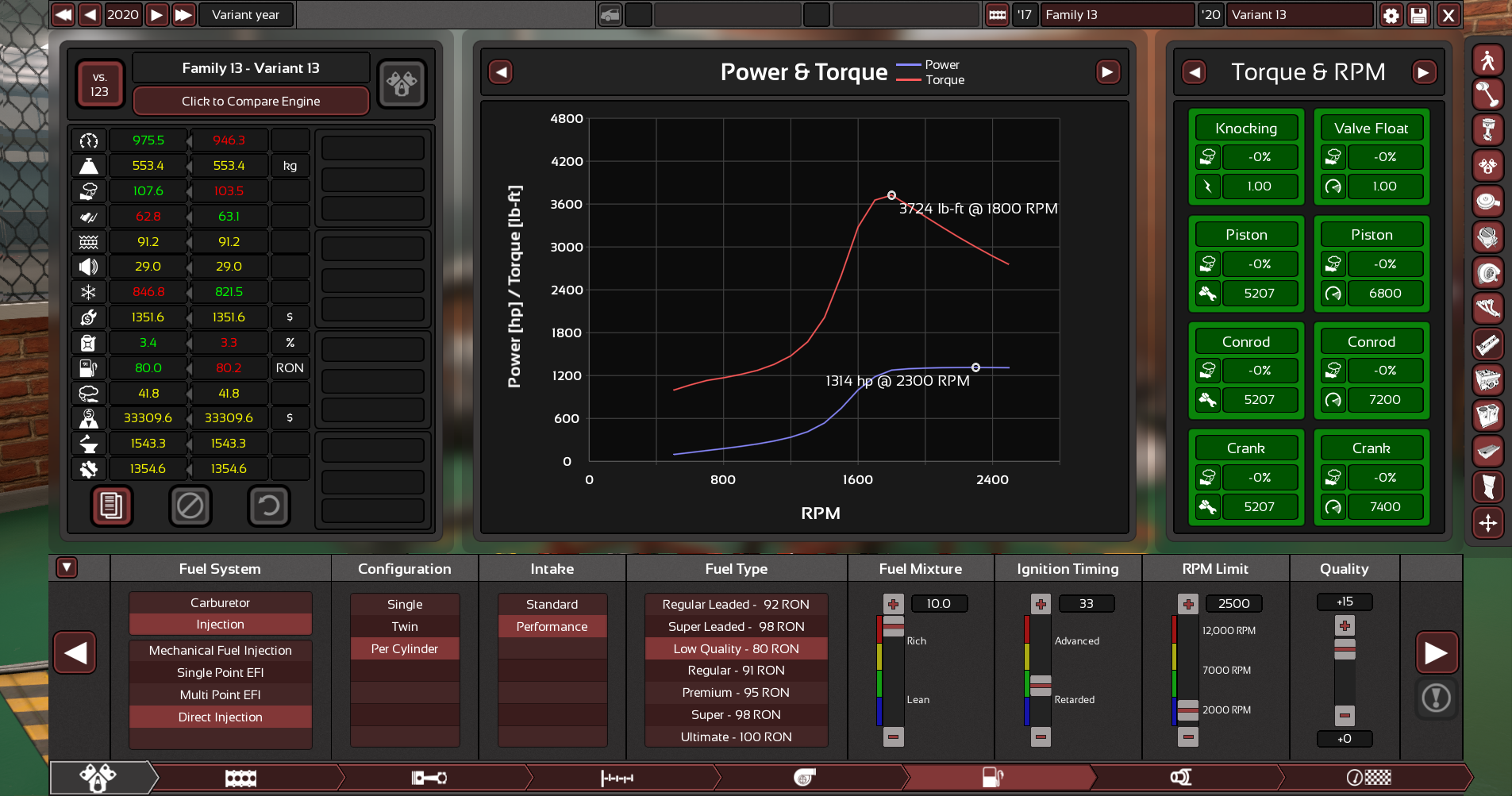 I suppose you could also use this for a truck? If you can fit the 21L in there somehow. Low quality fuel and push-rods, because challenges are fun. Could probably do with some better fuel efficiency I guess, but not like the cruiseliners ever cared much for that so long as it ain’t breaking their bottom line now did they. Still though, I can almost hear the fuel rushing through the lines or is that the compressor

21l. and you quality spammed it. which means it will take over 80 yrs to develop. gg- and its too big to produce any power at all. due to the engine freaking out if exposed to high rpm. thats why you mke so little out of such a huge engine.

That is the point here. Just look at the title.

Latest update ate all my engines

Welp guess I gotta make new ones then. 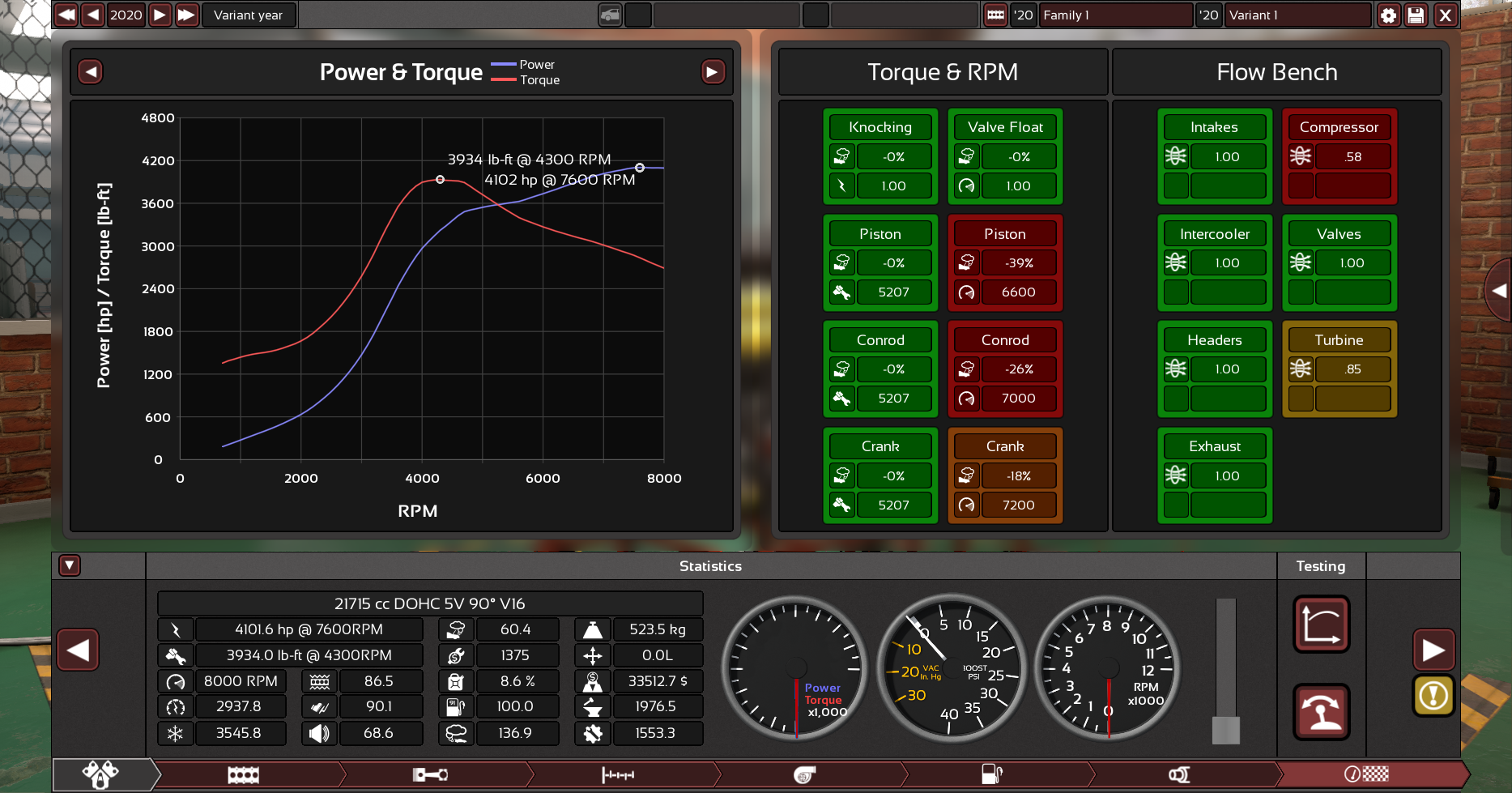 So that’s still up there, neat I guess, but nearly 6000 hp in cooling, dayum.
Meanwhile the ****box using the worst fuel apparently now loves to knock no matter what, bummer.

holy fek the engine weighs half a ton lmao

I read here like years ago somebody getting more than 50% out of an engine. Been tweaking on this tiny 1L inline 3 for an hour and all I get is 35% at the most. Has to be more than that, right? 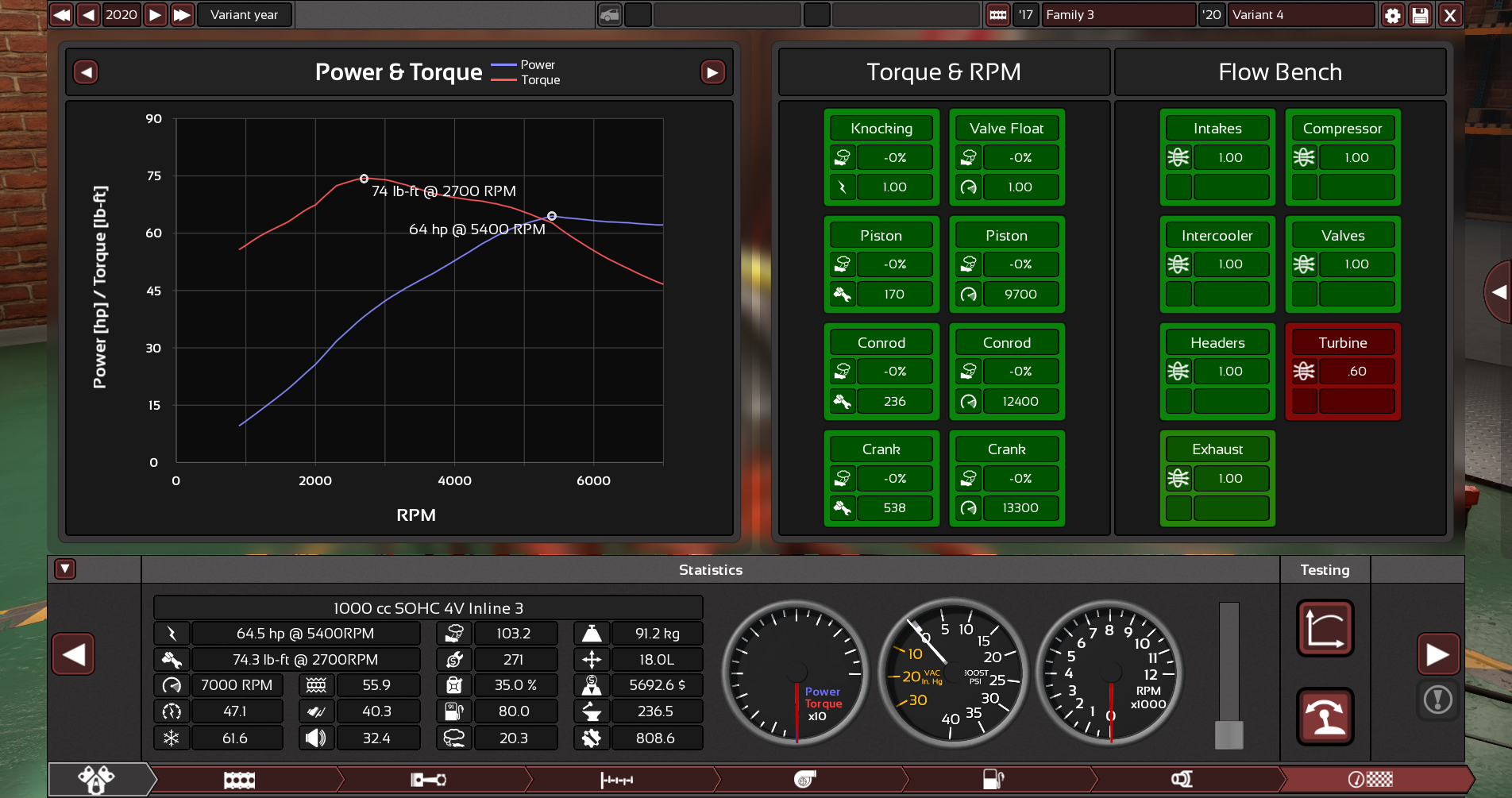 When you completely disregard practical considerations it is easy af. 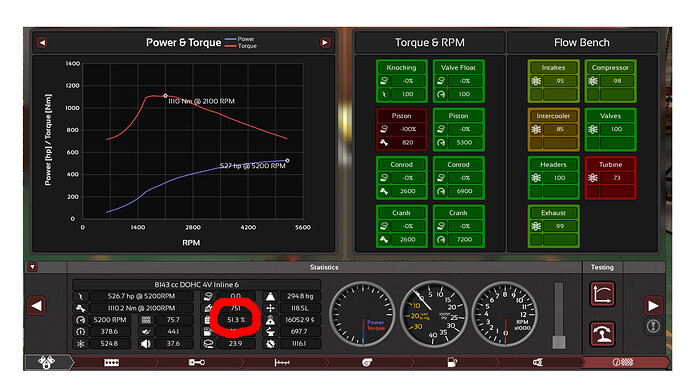 And 40% is reasonably achievable with a modern engine with turbo, DOHC, VVL and direct injection.

When you mean “eco turbo” you mean eco setting and no tweaking of the turbo whatsoever?
In R4 I managed to get a 1.5 three cylinder to 35% while still retaining 100hp/l, all quality sliders at 0.

Best part of it is I managed to get 100MPG from a production hatchback with it :’)

First of all, better to click reply on the post you reply to - I could have easily miss it

By eco-turbo I mean a turbo set by myself for economy - I never use presets, so I don’t even know how they behave. So basically the smallest possible turbine with raised A/R ratio if needed and the compressor set to the point where it gets maximum efficiency. Boost depending on many factors - I’ve made such engines with 0.6 bar, I’ve made them also with 1.0 bar. And yeah, before R5 the efficiency calcs were pretty bugged and with an efficient engine and proper gearing you could get riddiculuos MPG

And I3s seemed to work best with this magic.
35% efficiency with 100 hp/l sounds good

Oh boy are you about to dive deep into realities of marine engineering…
let’s go!
Well… two marine engines each at 4k hp! I’d say we totally should put that in a boat. Actually I got pretty much exactly that in the one Im on, but it’s only one engine. Would you care to guess the consumption? 9 cubic meters of diesel per 24 hrs. So, that’s two of them chugging 18, which is close to being 21 tons of the stuff. It also requires quite an amount of cooling liquid, in this case - water, close to 2 cubic meters.
So your cuban cigar illegal export buisness should be done in an inconspicuous boat the size of an ocean tug, which is hugely conspicuous (Think that boat from GTA Online that you deliver goods on, the big one, yeah). Also you should consider the fact that fuelling the thing would set you back about $15,000. Thank god you’re packing enough cigars to cover for those expenses.

And naturally the speed of the boat is impressive. We top out at 8 knots, even though we’re an ex-military fuel supply vessel, with an extremely efficient hydrodynamic hull. The big boy DID reach 24 knots before, but what changed? Well the propeller, actually did. So hey, your 8k hp would do you absolutely zero good for your getaway speedboat - tug - thing, since it’s all in the propeller, not the power.

Could probably do with some better fuel efficiency I guess, but not like the cruiseliners ever cared much for that so long as it ain’t breaking their bottom line now did they

Really? You think? a cubic meter of diesel costs 800 bucks on average in marine companies that provide bunkers, so if you’re wasting 20 per day instead of 10, that means 8000k eur per day in losses, or 180,000k eur per month (IN LOSSES ONLY because of the poorly designed engine). And the best part we’re talking about a cruise ship that’s the size of a big yacht, that’s about 10k in deadweight, and 100m tall. If we’re talking a cruise liner then it’s 25-35 tons per day, and a really big one would chug 50, on a regular, and having every extra fuel saving measure saves millions throughout a year. If you think that a company goes “Hell, that’s 3 million in fuel losses, and we’re happy about it” then you don’t really know how a buisness is run.

So do not try to justify the silly numbers of your power output with anything but the fact that you wanted silly numbers.

At this moment, it seems that one of two things happened
Either it’s A) You made a joke so clever that I did not even see it as one, or B) You realized that what you said was completely ridiculous and decided to go with “it’s a joke man” to cover that.

Also what might have happened is - I educated you a tiny bit on marine engineering, so you can adjust your twisted view of that field, and adjust your engine builds to suit that, and did not even get a “thank you” for it, because all you really cared about is “how high a number I can get” and then tried to justify it when the only reason you needed was “because”.

Threads called “Silly things and power” if that’s any clue.
(Also marine engineering is something I am well versed in don’t worry)

Anyways, while it decided to eat my saved engines again after the last update I am yet again back to square one, kinda losing my patience with that.