I’ve attached two engines; a 3.0L V6 & 3.0L I6. Both are built and tuned identically with the only variance being layout and turbo setup. I first used the economy preset for both and then I attempted to tune the V6 to match the I6. 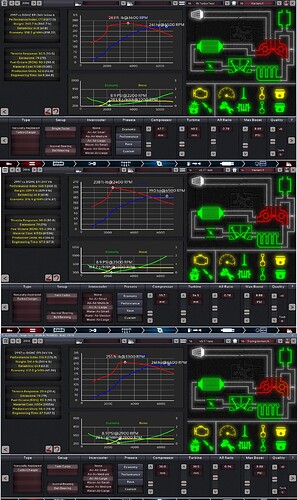 but there’s a problem with v6 twin turbos as well, they have a bigger turbo lag than a inline 6 single turbo

hopefully they will fix that

This is caused by the same turbo size limits in both cases. So you have an adequately sized turbo serving 6 cylinders in an I6 and two turbos of the same size in a V6, which means that they are oversized for these 3 cylinders they are each serving.

Basically because you have 2 turbos of the same size instead of 1 they require twice as much exhaust gas force to finish spooling, and the effect is twice as sharp. We don’t have any ways of mitigating this just yet, but in real life production cars there’s all kinds of ways to address this mechanically and electronically, not least staggered turbos, variable geometry, ECU etc. Those will come into the game later.

I’m not sure if turbo airflow scales linearly with compressor/turbine size in real life.

What I’m saying is in the third image I adjusted the twin turbos to the right size so that they made 241hp using 8.88psi boost at a similar rpm.
Given an equal level of airflow (as the engines have identical head flow characteristics and boost pressure), two twins should have less lag and more responsiveness compared to a single turbo, though I’m not sure if two twins together flowing the same amount of air a single will have a lower boost threshold compared to the single.

I honestly don’t know either, but I note that you’ve significantly increased the AR ratio in the V6 turbos, and I understand this is because you’ve had to decrease the compressor size in the turbo significantly to get the same airflow. But that higher AR ratio is going to push the boost threshold a fair bit. That part makes sense: even if you have 2 turbos, you’ll only get boost to the range that the size of the larger turbo supports so if both are small they’ll conk out earlier unless the AR ratio is high. 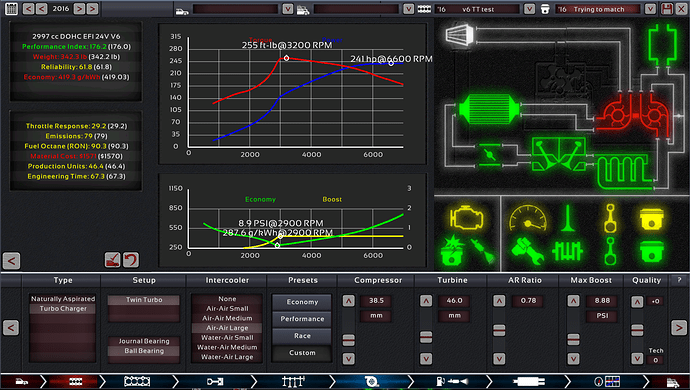 I can’t try it now, but theoretically this should work the same:

Why like that? Because such turbos would have theoretically the same air flow, as two turbos on the V6 would have the same cross-section area combined as one turbo on the I6.

In reality turbo sizing is anything but linear in regards to response. The turbo’s in game are very simplified in the way they work atm and unless you are building in the 80’s they do not operate like modern counterparts. The game does not take into account other factors such as wastegate type and sizes, different compressor/turbine wheel construction in regards to blades and materials, and to my knowledge exhaust pulse timing and individual cylinder flow(I could be wrong here). Also I think a v6 operates in a very different manner to an inline six both ingame and out…?

Ok… So I’ve made two experimental engines to check my theory from the post above - and my theory is a fail. I’ve set turbos according to it and the engines’ performance ended up being significantly different. Even more, I tried to set the turbos in both engines to be on the edge of being completely red, and it didn’t make them similar either. So now I have no idea what exactly causes that difference.

By the way I’ve confirmed the existence of a fault that I suspected earlier - turbo size limits are based only on the cylinder bore. Not even the number of cylinders affects this - so that might explain why I6s are the best for non-sporty turbo in the current Automation - they offer the largest possible exhaust gas amount per turbo size (most cylinders served by one turbo).

turbo size limits are based only on the cylinder bore

Yeap, this is a known mechanic from since turbo was implemented.

Not sure how the revamp will affect this though.

I believe killrob, at some point, said the developers themselves have no idea why that limit exists so it will likely go away with the engine revamp

It has been mentioned many times that turbo size limits depend on physical size limits for how they are mounted. You can’t have a turbo inside or touching the engine block. That’s all, there are no arbitrary limitations. The one thing that will change with the turbo revamp regarding size is that there will be other headers, moving the turbos further away from the engine block to allow for bigger turbo sizes.

What about for smaller turbos? The minimum size of a turbo is also limited by the bore of the engine.

Yes it is, we considered that to be a reasonable minimum size, based on what turbos exist for passenger cars IRL.

Then single turbos for V-engines are the only hope…

Through reverse-flow heads? Or by simply having the turbo at the end of the y-pipe? What would be the advantage to the latter?

Advantage? Single turbo on an I6 performs far better than twin turbos on a comparable V6, and since n/a V6s and I6s show no difference in performance, I guess that with exactly the same turbo setup they should perform extremely similar too, and that is the point.

Advantage? Single turbo on an I6 performs far better than twin turbos on a comparable V6, and since n/a V6s and I6s show no difference in performance, I guess that with exactly the same turbo setup they should perform extremely similar too, and that is the point.

Right, I was referring to the V6 with a single turbo though. Reverse-flow heads aren’t in the game, so the turbo couldn’t be valley mounted. Which means the headers would have to join a y-pipe, then to the turbo. With the amount of distance that would add, you’d assume they’d lose a bit of heat as a result, which one would assume would be worse performing and more complex than just running two turbos.

they’d lose a bit of heat as a result, which one would assume would be worse performing

Wait what? Then what are intercoolers for? Not for COOLING the air fuel mix, maybe? So it would rather improve performance. But anyway, I doubt that Automation replicates so detailed effects. Example? Less cylinders with the same capacity should make efficiency better (because of less friction), yet they don’t; also lighter internals should make efficiency better (less energy losses for moving the engine itself), yet they don’t too.