At just $76.91 per horsepower, the performance-per-dollar ratio is unmatched. For now, a quick teaser of the 2020 Chevrolet Camaro LT1 - my first new car. A more in-depth review and driving impressions to follow! 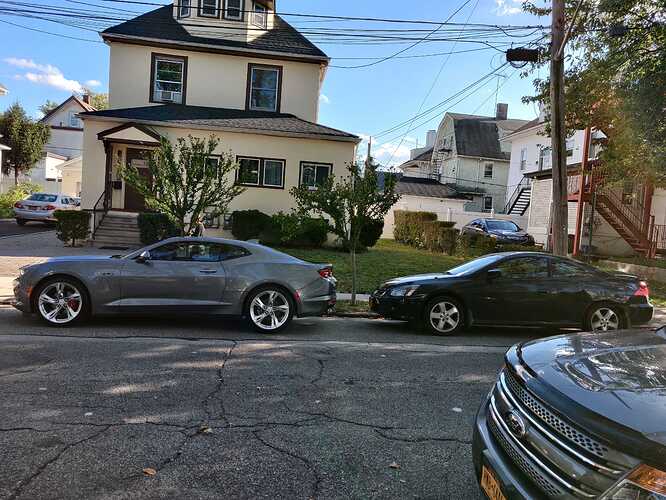 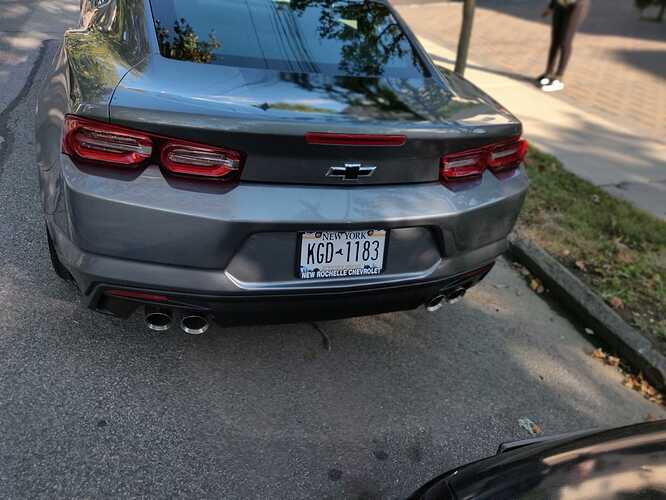 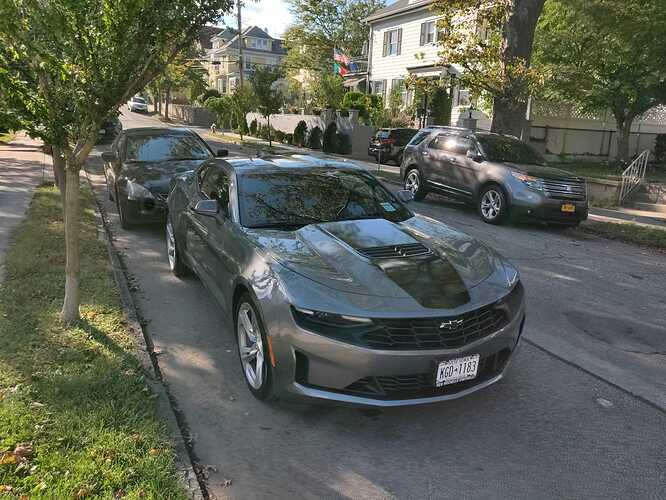 Congrats on the purchase! May it bring you fun for long years!

@Marcus_gt500 Thank you very much! I really appreciate it!

Decisions, Decisions
I’ve been window shopping for the better part of 6 months. Constantly vacillating between buying something new or used, fast or “quick enough”, unique or “me-too”. My list of cars included everything from 20-year old 9-second (1/4 mile) Honda Civics on one end, to the next generation (Z35?) Nissan Z (only to leave a deposit since it’s not in production yet). I was also tempted by the M113K cars, but #SavingTheManuals still held a strong appeal.

Taking the Plunge
Given everything that’s been happening in the country lately, I thought it best to wait and see until sometime between December and March to make a decision. At the insistence of a friend of mine, I looked into a few lease/finance offers just to see what was out there without really intending to buy anything.

Enter the Camaro
For the price, the Camaro LT1 offers a huge amount of value for money. I watched reviews, read articles, forum posts and more. The more I learned about the car, the more I realized it was the perfect fit for what I was looking for. Fast, loud, manual - and since it’s new - a warranty! Sure, the Challenger Scat Pack has better lease rates, but at 4,230 lbs it’s a bit heavy and quite a bit more expensive overall since I decided to buy. And yes, the Mustang is easier to see out of

, but also more expensive. Having sampled a C7 with the same LT1 V8 last year while at a work conference, and having rented a 2012 Camaro SS (similar visibility) - the familiarity combined with the lowest overall price was too good to pass up.

On First Delivery
Although I’m in NY, the car was delivered from New Hampshire as my nationwide search for the best deal lead me to a dealer there. I probably could’ve negotiated a slightly better deal taking the 200 mile trip up north, but the convenience of going to a local dealer to transact made it worth the relatively small sacrifice. After signing the paperwork Wednesday, 30th September walking outside and being presented with this shiny new car was as surreal an experience as I can remember.

Startup
It’s loud, LOL. But in a good way. The kind of rumble that reminds you you’re in something with 455 horsepower under the hood. I opted to get the NPP dual mode exhaust - one of the few options in an otherwise bare bones basic “stripper” model. It remembers your last setting whether you leave it in tour or sport mode and the exhaust note acts accordingly when you push the start button.

Initial Driving Impressions
The clutch is light, but it’s action is “deliberate” for lack of a better word. My Honda’s clutch is also light, but feels numb by comparison. Since the break-in procedure calls for very strict limitations on speed (<80mph), revs (<4,000rpm), throttle/brake application etc. I can’t tell you what it’s like at the limit.

What I can say is that even when driving within those strict limits, you can pull away from traffic like they’re standing still and the power even at relatively moderate speed/revs is enough to press you firmly in the comfortable cloth bucket seats.

The Tremec TR-6060 transmission is one of the best in the business. #SaveTheManuals It’s relatively smooth, but the 1-4 skip shift function was at first annoying, but easily driven around. With double cone synchronizers in reverse, gone are the days when I had to put the gearbox in a forward gear then reverse to stop it balking/grinding. My 1994 Ford Taurus SHO had an unsynchronized reverse gear, the 2006 Honda Accord V6 6-speed which I still have, has a single-cone synchronizer for reverse, but can be finicky if you don’t put it in a forward gear first.

First 500 miles…almost
It’s been nothing but smiles along the way. The power and performance are unlike anything I’ve ever owned before. It’s got more power than my first two cars combined. More torque than both manual cars I’ve owned (and still own) combined. I’m very tempted to take it to the drag strip to see what it can do, but braver souls than I have tried that on the factory all-seasons and well…

…so I’ll wait until the spring and put a proper wheel/tire combo on the back and see what’s what.

I haven’t had a chance to go through all the car’s infotainment and instrument cluster settings. I’ve been too busy enjoying the driving experience to play with them but as I learn more about the car, and can finally open it up once the break-in has passed I’ll report back with a deeper dive in what it’s like to drive!

I’ll wait until the spring and put a proper wheel/tire combo on the back and see what’s what.

You could do far worse than buy a set of proper high-performance summer tires for when the temperatures have sufficiently risen for your to use them safely. After all, the SS package comes with those as standard - and the base LT1 also should, given that it is available with the same engine and transmission combos.

@abg7 The LT1s come standard with all-seasons to keep both the initial cost and maintenance costs reasonable. Because they’re square 245s all the way around, you can rotate them. You can’t rotate the staggered 245/275 setup of the SS. Given my obsession with drag racing, I was thinking of going even more aggressive than summer tires: Something more along the lines of full-on drag radials instead. SMG has done it again, bringing you a combo package including all the parts you need to get out to the track and make some passes. Package includes: 2 Race Star Drag wheels in your choice of finish in 17×9.5 2 Mickey Thompson 305/45/17 ET Street SS...

My Camaro now has nearly 4,200 miles on the clock. It got it’s first oil change and service about a month ago. And I’ve collected 10 timeslips from Island Dragway’s 1/4 mile strip. In its completely stock configuration, I managed a best 12.958 @ 115.55 mph. Tires were aired down to 26 psi on this run, and the DA was around 271 ft. At least one or more of my runs were filmed by a gentleman from WAKA Motorsports. So I’ll add a link to the video once they get around to posting it. 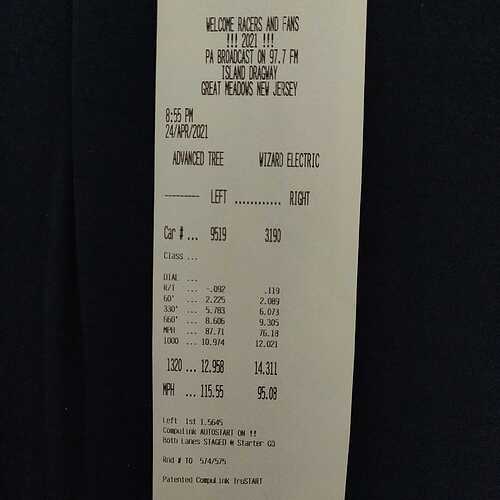 Apart from the copious amounts of brake dust that likes to build up and the awkward (ok, zero) visibility in certain situations - the car continues to be a joy to drive and is as fun and reliable as ever. I’m probably going to wait until the fall to get the drag pack I posted above. I don’t plan on doing any other modifications (maybe a line lock). 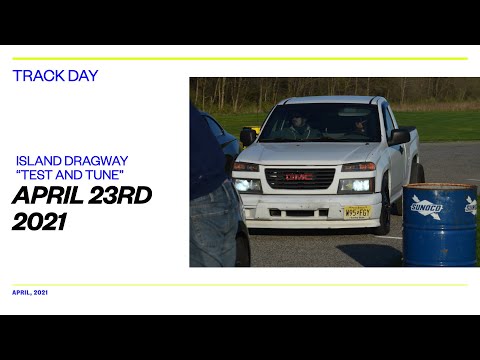 Out the 8 runs total I had that night, they caught the 3 worst runs.