Smolensk Motors was founded in 1975 in Smolensk, Russia. It intended to be Russia’s first mainstream commercial automobile manufacturer. Unfortunately, it failed due Cold War relations between countries. The company was recently revived by an unknown Russian oil tycoon, and has started production of new models. The company intends to start producing vehicles for the masses, in order to spread it’s brand outside of its home country.

The first car that Smolensk Motors after revival was the Type E. The type E is a very affordable, yet fun to drive five-door hatchback. The Type E is to be sold for $16,000 to $19,000, and only comes in one model, although this many be changed in later model years. The car is powered by a very efficient, very economical, and very long lasting 70 horsepower inline four that runs on regular unleaded. Due to the lightweight body of the car, the engine can take the car from 0 to 100kph in under eight seconds, and go all the way to a top speed of 175kph. All together, the car itself weighs less than 500 kilograms, including the engine. In the corners, the car can achieve nearly 0.9g. Above all, the car gets 56 miles to the gallon, making it perfect for a long road trip, as well as for city commuters. With the Type E, Smolensk Motors hopes to make a mark in major international markets, while achieving major success in its home country. 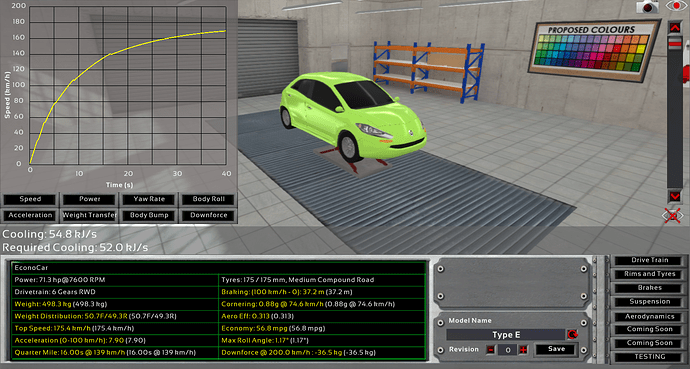 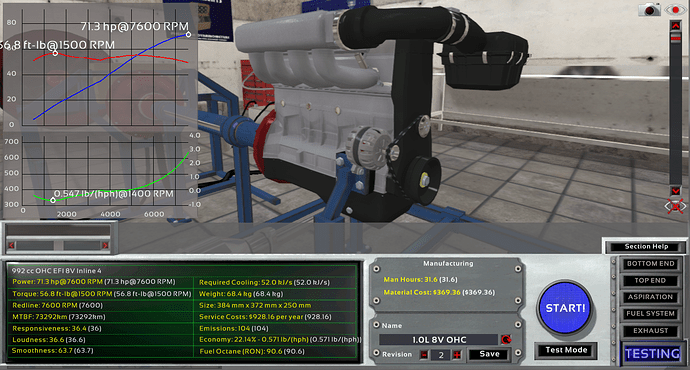 Nice history and good luck on your company! Though, I must admit, 500kg including the engine is really lightweight for a 5 door hatchback haha! My 3door Citroen Saxo with a 1.1 engine is even almost 900kg! So your car is really just a shell with nothing in it but 5 seats, a steering wheel, shifter and handbrake, or the car is a deathtrap

Besides all that, don’t let your spirit down! Good job!

The car panels are polymer, which really helps with the weight. I suppose I could say that the body and engine together weigh less that 500kg. I got the number from the game, not from my own estimate. Otherwise, thanks for the feedback.

That number is still inaccurate I believe. You can still move that slider and it always shows something like 500kg. Still not sure about the 500kg even if it is polymere

I see… In that case, I’ll change the weight slider to make it more accurate.

I thought: if it stuck engine type B4 you get “mad stool”