The gold era of Italian car manufacturer saw Sport Design Italia (1944-) as one of the most underrated bodywork design factory, collaborating with historical brands as Lancia and Alfa Romeo in Italy, and with Aston Martin and Jaguar for some experimental project during the middle of the 1950s.
Augusto Brandelli (1904-1993) founded the company in 1944, just a year before the war ended,collaborating as a
war-vehicles mechanic, standing out for its excellent work. The US General Stuff recognized the valuable contribution given, rewarding him with the necessary funds to build a new factory just near Monza.
During the 1950s he refinded the bodywork modeling techniques, proposing some winning design solution in cars as the Alfa Romeo Giulietta, the Lancia Flaminia and the racing model Maserati A6G54, while in the 1960s he starting signing agreements for engines and mechanical parts as transmissions and suspensions, trying to start his own car company.
Finally, after over two decades working on his own projects, in 1970 Brandelli established the Sport Design Italia Car Company, but the next years were pretty arsh for car companies… 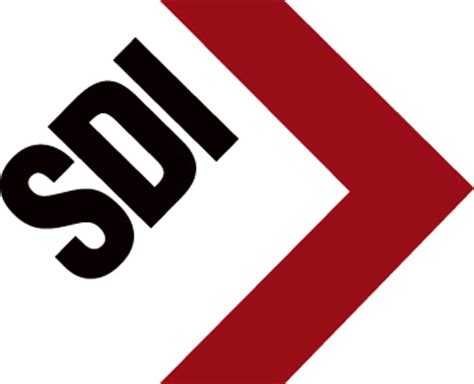 The actual company logo, redesigned in 2004

Infact, only three years later the petrol crisis started putting in serious trouble sports car brands, and also the racing world was affected, and the various Federations had to set several limits to fuel consuption, reducing engine’s dimension and cylinders number. Despite this, Augusto didn’t worry that much, because in his philosophy cars had to be a right compromise between weight and power.
His first car had to have a 8-cylinders engine, which would have provided enough performances without sacrifying the weight, or the size of the bodywork. This choice can be seen also as a “thank you” to the American world that helped Augusto on a long and difficult walk, and as you’ll soon be able to see, also the car shape is, in a way, a homage to the USA muscle cars. 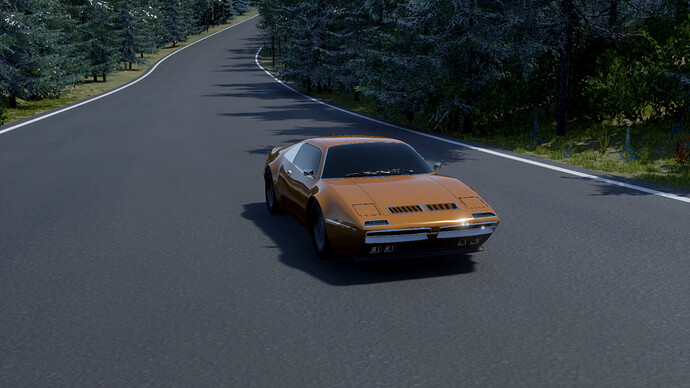 Typical US muscle car design with european shades, or typical European sports car with some American taste?
Looking at the design of the first SDI’s creation, this could be one of the first question you might ask…

But the most curious fact is the care in the choice of materials, also gained from collaborations in the racing world during the second half of the 1960s. Augusto wanted to spread the recent new technologies brought in competitions,in the world of “common” cars. 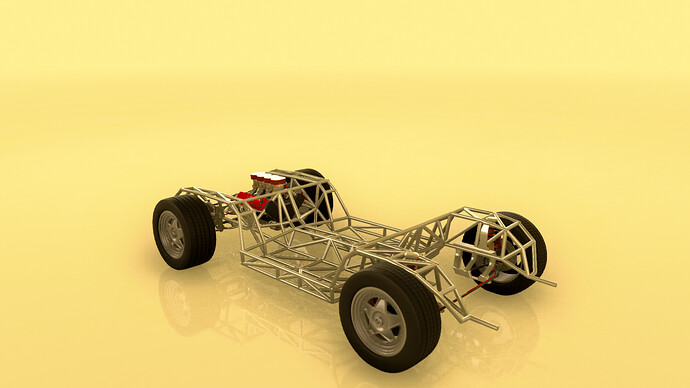 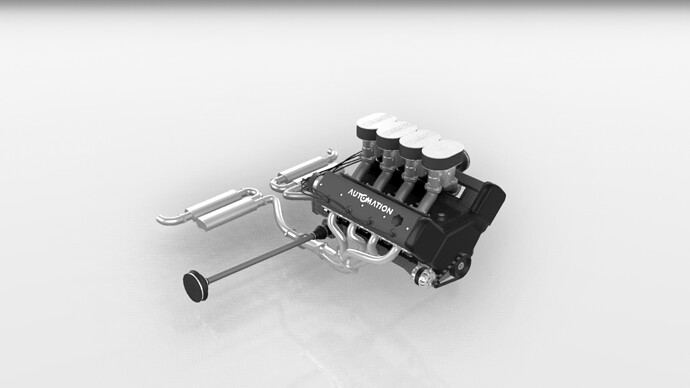 4 DCOE, Weber carburetors, gave both prestige and sportiness at the engine, with a tubular double exhaust system and a 9,4:1 compression ratio.
The power is gave to the rear wheels with an open differential, and a 5-speed manual gearbox guarantee an optimal torque and power distribution, aggressively, when you want, to the 240/55R 16 rear wheels.
Rear and front solid discs makes the 350 GTS brake with security, giving one of the best breaking performances with a 38 meters on the 100-0 Km/h.
268 Km/h and 4,9 secs on the 0-100 Km/h are enough to intimidate the italian 8-cylinders opponents.
That sursprising 0-100 is a special gift from the only 1014 kg of weight, reached without sacrifying the comfort: really luxury leather interiors with a great sound system, making the car a fast travelling sofà. 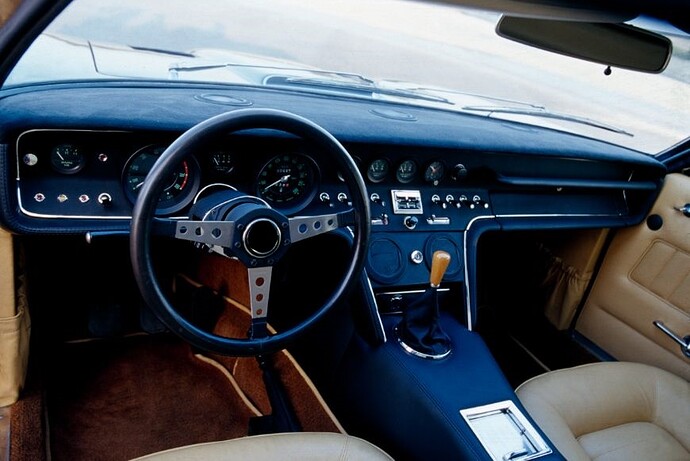 InkedSDI%20328%20GTS%20Interiors_LI870×582 100 KB
Nearly the hole interiors are covered by leather woodgrain or chrome finishes: Augusto Brandelli wanted really something spacial, deciding not to save money for them

Its dynamic DNA is still strongly present: during a test set in the Airfield circuit, the car reached a 1:25,95 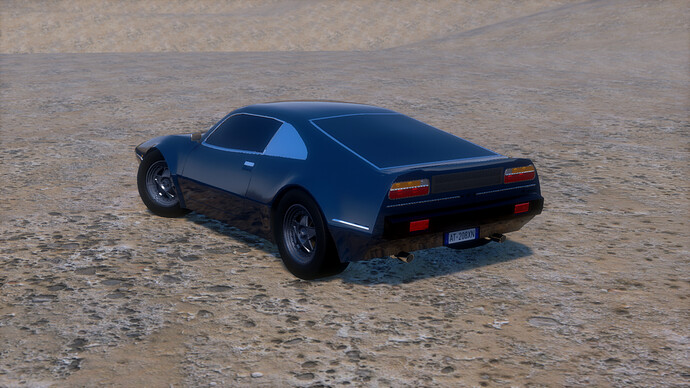 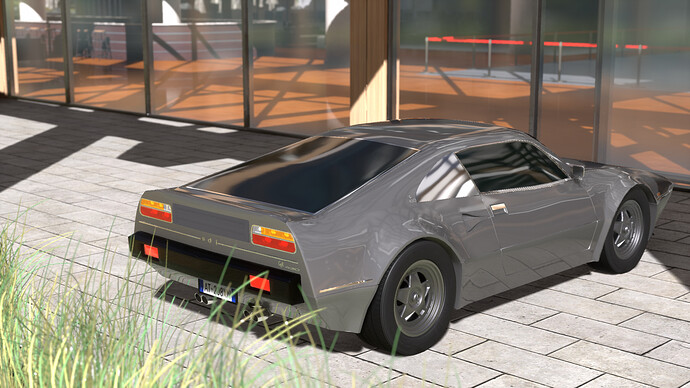 In 1974, despite the sales chocked by the oil crisis, SDI moved into Ferrari high performance cars’ territory, giving the 350 GTS a more race-oriented variant, with a 4276 cc (82,5 x 100 mm) V8 engine, 3 valves SOHC.
The engine layout was pretty strange and nearly istantly the 430 GTR bacame a rare pearl, with only 160 exemplars produced. 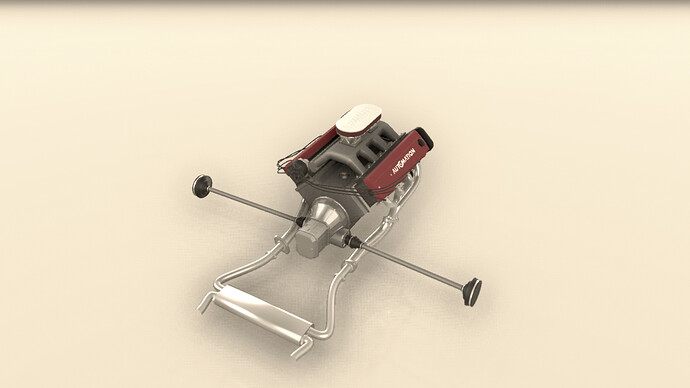 As you can see from the photo, also the carburetors configuartion changed into a double 4 barrel system, with a performance air intake. The much higher torque required the introduction of special H forged piston rods.

The performance greatly increased, with over 312 hp and nearly 400 Nm of torque, avaiable at 4400 rpm.
The more sportly-oriented car was presented in 1974 Torino Motor Show, and it was a true shock: in facts, while the other brands presented more economical and less fuel-consuming cars, SDI decided to place itself between Maserati and Ferrari, giving a Lancia admiral confort, when not pushing the throttle, bringing the car to 277 Km/h, with a 4,4, secs on the 0-100 Km/h. During the previous two years, when only the 350 GTS was sold, Augusto Brandelli worked hard on finding new aereodynamical solutions and some “tactics” in order to reduce weight. 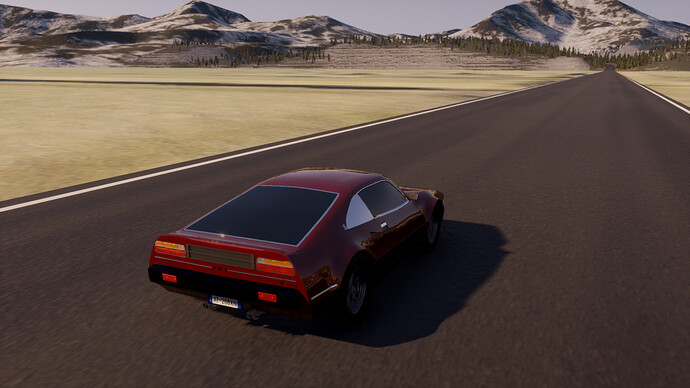 Photo1061920×1080 530 KB
The 430 GTS is recognizable from the four exhaust pipes, and for the special edition colors: here you can see the Fiorano Red, but it’s also avaiable in Modena Yellow, Chapman Green or Pearl Grey.

All these small tricks allowed a weight increase of only 5 kilos, keeping all the comfort of the seats, and the prestige of the interiors.
The price of the model was slighlty higher than a Maserati, corresponding on € 74.000 for the 450 GTR, but today quotations are, for the most well kept models, reaching $260.000: that testifies that the car value is going to increase, contributing to the imaginary of a new star among classic cars. 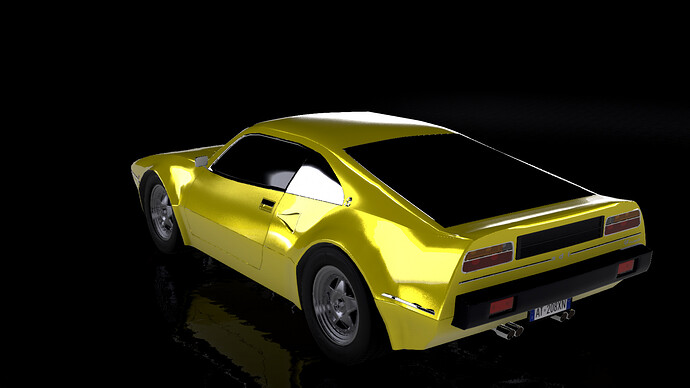 Not a bad start overall.

In 1974, such a rapid 0-60 mph time would have been unheard of, what with the oil crisis threatening to kill off the performance car for good.

THE SHORT COLLABORATION WITH LANCIA

Only just a year after the first 430GTR delling models, Augusto Brandelli decided to really impose his company as one of the major sports and race car little factories, and the next step was the entrance in the big world of competition. It was a very risky decision, because every competition sector, at the time, used to have a nearly undisputed dominion. However, its enterprising character was balanced by his accurate sense of logic. Considering that Group 6, or, even further, Formula 1, would have required more economical resources, the “easiest” way in order to make the debut was the just-reformed Group 5. In its last restrictions, FIA imposed that Group 5 cars had to have a strict relation with production cars, especially chassis wise. From the aerodynamic aspect, instead, carmakers were pretty free on adopting every type of solution they liked.
Seeing an overwhelming success of Porsche, also taking advantage of their very powerful turbocharged boxer engines, the newly born Racing Development Department - with the very last funds - had to look for a different engine from the V8, that had less possibilities to being tuned properly for racing purposes.
The opportuninity came thanks to Lancia, that at the time was starting to consider the withdraw of its exceptionally good Stratos, which mounted a tthe same Ferrari Dino’s engine: a 2.4 V6 naturally-aspired engine, which later adopted a turbocharge system. The negotiation were long and axhausting, but at the end, SDI and Lancia reached a compromise: they could use their engine only if SDI would explicitely showed Lancia collaboration to FIA. The pacts seemed fine to Brandelli, and the team worked hard in order to develop an engine that could have put in trouble the german opponent…

Using a turbocharged engine, according to FIA regulations, meant a “deficit” of 1,4 liters of displacement: a 2.8 turbocharged would have competed against 4.0 liters naturally-aspired engine, for example. This was the highest category, were the most extreme models competed, and was a true concentrate of automotive innovation. In order to enter in this category, the 2.4 liters V6 Ferrari Dino’s engine needed a displacement tuning: bore and stroke were now 92,5 and 70 mm, generating a 2822 cc engine, able to rev up to 10000 rpm. The cam profile was wideley revised and, instead of the triple carburetor, SDI adopted a new mechanical fuel injection and a turbocharger with adjustable boost, with its maximum set at 1.5 bar. 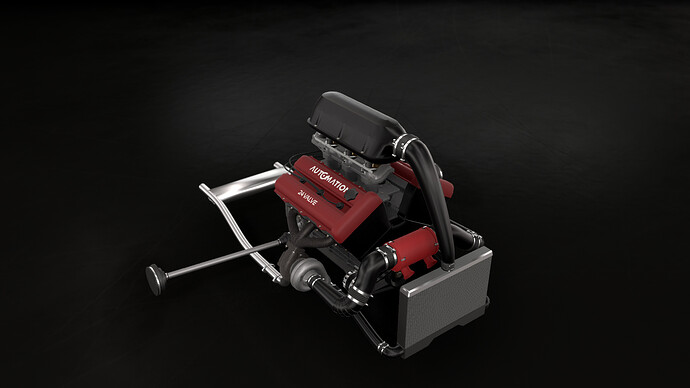 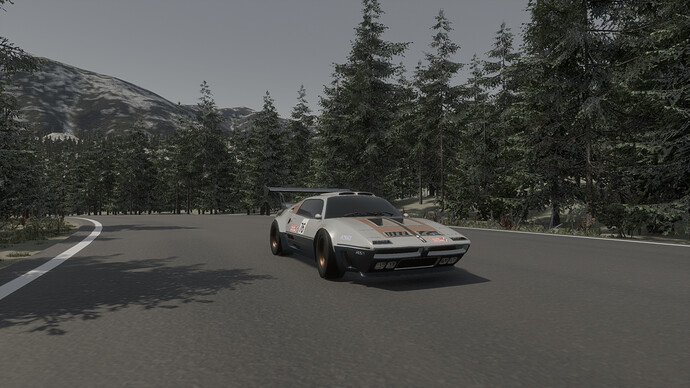 Free to do almost everything with spoilers and other aerodynamic solutions, SDI worked hard on the yet good body of the standard 430 GTR enlarging the wheels, and adding a huge rear spoiler, which created nearly 170 kg of downforce, needed to keep it glued to the tarmac. 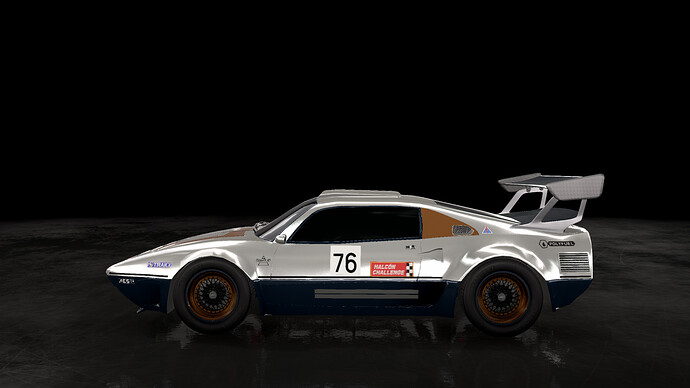 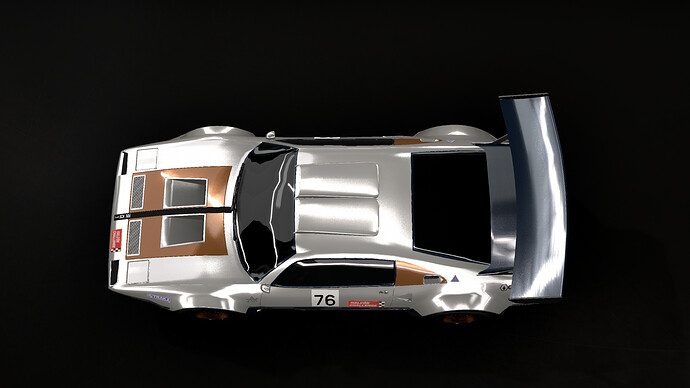 Also the chassis and the gearbox were widely revised to stand the great power output of the engine,and to guarantee the traction during the launch, the tyres were widened up to 235 mm at the front and 315 mm at the back. 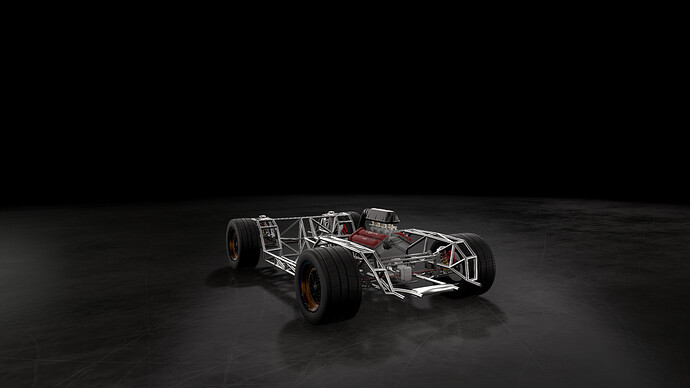 The CM76T was 25 kilos lighter than the 935 Turbo ( 865 kg ): this allowed a 0-100 km/h in 3"3, but a top speed of “only” 328 Km/h, which was 12 less athn the german rival, which was, however, less drivable, so the SDI coild boast a better agility between the corners, while the Porsche showed its outstanding 630 hp (with overboost) in the Mulsanne straightline. Despite the good attempt and the excellent result obtained during the 1976 season, the german domain was total, and left remaining podiums to the little Italian carmaker, which earned for sure a lot fame thanks to unexpected results.
The car took part in the World Championship for Makes until 1982, when FIA canged again the regulations, but at the time the CM76T was obsolete, despite the general improvements done every season and a power output, for the last races, of over 780 hp. 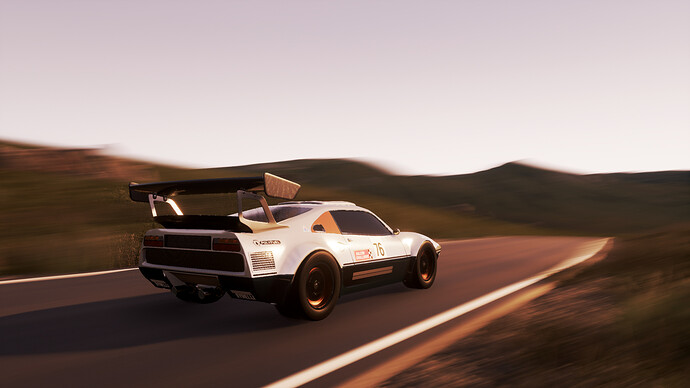